Today’s guest blog on the Javanese Manuscripts from Yogyakarta Digitisation Project is by Prof. Ann Kumar of the Australian National University

The highly complex Javanese calendar has evolved over many centuries. The year dating system used is the Indian Shaka era, which begins in 78 A.D., but in the 17th century the Islamic lunar months were substituted for the solar months of the Shaka era. This unorthodox and hard-to-operate hybrid was presumably due to the desire to observe the major events of the Muslim year, particularly the Hajj, at the same time as Muslims around the world.

However, apart from these external influences, there are distinctively Javanese systems of time-keeping, such as the use of cycles not tied to any year-date. The principal ones are a seven-year cycle, the eight-year windu cycle, and the one described in this article: the 30-week wuku cycle, which has been referenced in inscriptions dating from the 8th century (Damais 1955). 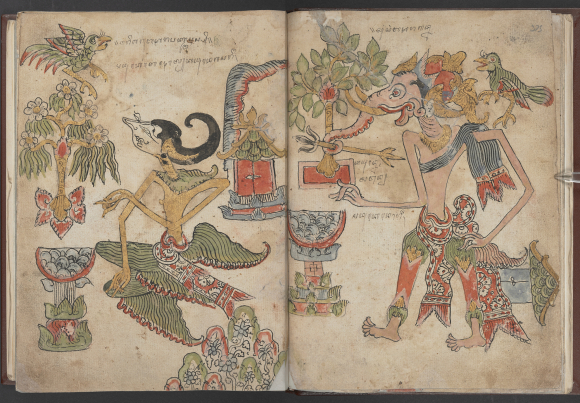 A wuku week lasts for 7 days, and there are 30 named weeks in the wuku year of 210 days, as follows:

Much like a horoscope, a specific wuku gives a picture of the character and circumstances of a person born in that wuku which will determine their fortunes. Each wuku is assigned a god and a tree. It may also be assigned a bird; an icon depicting water, ie. forecasting rain; a house in different positions, referring to economic matters; and a pennant (umbul-umbul), an insignia of rank. The 30 wuku are depicted in illustrated manuscripts known as pawukon. The three pawukon manuscripts from the British Library collection illustrated here have all been fully digitised. Shown above is the seventh wuku, Wariga Alit, which has the following elements:
• The god is Yang Asmara, another name for Kama, the god of love (he holds an arrow à la Cupid). His name is written in Javanese characters on his left. This indicates that a child born in this wuku will be beautiful.
• The red-eyed bird is the solitary kapoḍang, or black-naped oriole, perching on a sulastri tree, well known for its fragrance.
• The structure in the left foreground is a canḍi, or funerary temple, indicating melancholy.
Interpreting these symbols, a child born in this wuku is beautiful, but fickle, and is solitary, shy, or melancholy. This wuku is also said to be bad for leaders of troops. 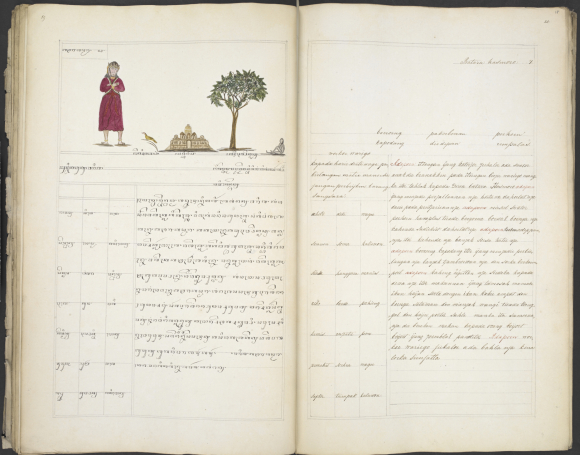 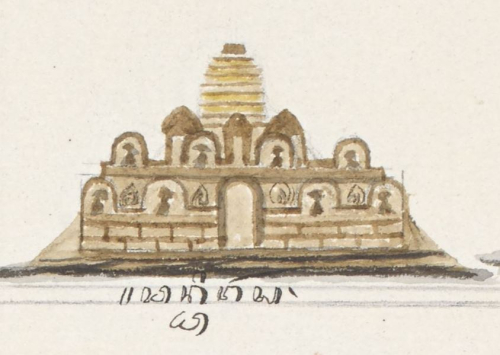 Unlike the stylized canḍi depicted in the Yogyakarta Pawukon of 1807, in Kyai Suradimanggala's Pawukon the canḍi recalls the profile of Borobudur, which in 1814 was only just being excavated. British Library, Or 15932, f. 17v (detail)

More elaborate versions of the wuku calendar are also known, where each wuku might have a particular danger inherent in it, such as being bitten by a snake or wounded with a weapon. Some wuku calendars also include information about the movements of a monster called Jabung Kala who watches over the wuku and rotates in a circle synchronically with the wuku weeks, changing position every seven days. His position is considered important for generals, who should orientate their battle lines so as not to get across him.

The American sociologist Eviatar Zerubavel describes the Javanese wuku calendar as the most remarkable and intricate week-calendar ever invented (1985: 68-9). Unrelated to the seasons and to solar and lunar phases, he points out it is a unique product of the rational human mind and of humans’ ability to live in accordance with entirely artificial rhythms which they create. 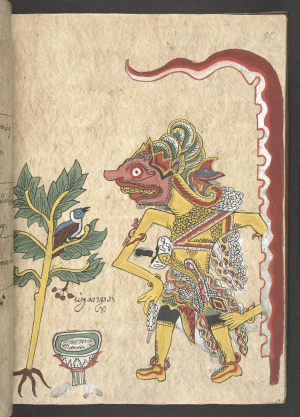 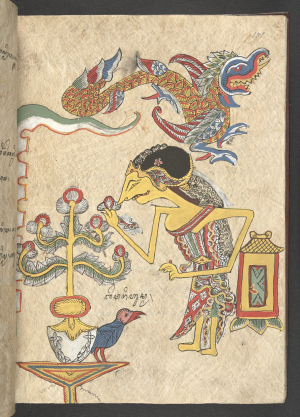 The wuku calendar is often said to be based on the Watu Gunung myth.In this, Watu Gunung is a powerful warrior who by defeating the incumbent king and his allies became ruler of Giling Wesi. He married two heavenly nymphs with whom he had thirteen sets of male twins, plus one single male birth. The parents and children gave their names to the thirty wuku, listed above. Watu Gunung was enterprising and undertook to build an iron city. A voice from heaven warned him to offer the proper prayers to Batara Guru, the supreme Hindu god, and to do asceticism, after which he built the iron city in less than seven years. He subsequently became more and more conceited and populated the city with 40 men resembling the gods and 40 maids like the Widadaris (heavenly nymphs), claiming that it was like the palace of Batara Guru, the chief god. This eventually led to war with the gods, in which Watu Gunung was killed. Thanks to his wives interceding with the gods he and all his family were admitted to heaven. However, it is difficult to see how the Watu Gunung myth, with its incredible story of thirteen sets of all-male twins plus a single son, could have been the founding myth on which the wuku calendar was subsequently based. It seems more likely that it was composed after the wuku calendar, to provide a mythic basis, or that a previous myth has been substantially modified. Thus the origin of the wuku remains unclear.

The wuku calendar is no longer used in Java, but its maximum complexity is fully preserved in Bali. In this, the 210 days of the wuku year are divided into weeks of differing lengths. They may be 10, 9, or 8 days long, or down to just one day long. Each week has a particular name and so does each day of each week, meaning that every day has a total of ten names! This is not just academic complexity, but has practical significance. For example, the three-day week determines the markets in Bali which shift from one village to another in a three-day cycle. The five-, six- and seven-day weeks are the most important, especially when they co-occur. Only once in 210 days does a day fall on all three cycles (5 x 6 x 7), and that day is Galungan, which is the main Balinese religious festival. Another important day, Kajeng-Keliwon, is when the third day of the three-day week, Kajeng, falls on the same day as the fifth day of the five-day week, Keliwon. This happens every 15 days, and many temple ceremonies are held on this day. Not surprisingly, to stay on top of all this a special calendar is needed, called a tika, of which there are some finely illustrated examples.

For a full listing of the 30 wuku and their associated characteristics, see:
Ann Kumar, Java and modern Europe: ambiguous encounters. Richmond: Curzon, 1996; chapter 3.