This guest blog post is contributed by Professor Swati Chattopadhyay, an architectural historian specialising in modern architecture and urbanism, and the cultural landscape of British Colonialism.

Edith E. Cuthell, author of My Garden in the City of Gardens (1905), described the Dilkusha Palace in Lucknow as the “most picturesquely situated of all the ‘lordly pleasure houses’ that successive Oudh sovereigns reared around their capital.” Cuthell, wife of Captain Thomas George Cuthell, lived in the Lucknow cantonment in the mid-late 1870s, and her memoirs of Lucknow are intimately woven with the sites of the Sepoy Revolt of 1857-59. Locating Dilkusha in the history of the revolt, she wrote:

The ruins of Heart's Delight have been tenderly gardened.[i] Gay creepers clothe the tower and the loopholed walls, but

"O'er the sloping mound where the roses bloom

Can it be an old forgotten tomb?"

For all the British graves which lie below are nameless, save those of Lieutenant W. Paul, 4th Punjaub Rifles, and Lieutenant Charles Keith Dashwood, of the 18th B.N.I. (Cuthell, 165-166).

Cuthell’s view of the Dilkusha as a picturesque ruin, dotted with forgotten unmarked tombs, raises a host of questions: When did Dilkusha become a ruin? What was its role in the post-Revolt landscape of the city? How did this role differ from the building’s original design and placement in the landscape?

Dilkusha underwent two major makeovers, one in the 1830s and then in the 1870s. Several visual documents at the British Library’s India Office Collection help us unpack this history of makeovers, and dispel the lingering assumption that the building was destroyed in the bombardment during the Sepoy Revolt (Das, 37).[ii]

Built under the patronage of Nawab Sadat Ali Khan (r. 1798-1814) c1805, Dilkusha served as a country house/hunting lodge within a vast deer park on the outskirts of nawabi Lucknow. Sadat Ali Khan’s aide-de-camp Major Gore Ouseley designed the building based on the plan of Seton Delaval House in Northumberland, England.[iii] Yet the plan and use of Dilkusha were substantially different from that of Seton Delaval (Das, 37-39, 42-51). Following the Palladian pattern of country houses popular in England at that time, two detached service buildings housed the stables and kitchen. Also, the building’s orientation was changed to take advantage of the north view of the Gomti River. Staircase towers were inserted on the northeast and southwest, freeing up the protruding square bays for use as living space. In contrast to the other palaces of Awadh royalty, the Dilkusha stood as a discrete object on open park ground.

Artist Sita Ram who traveled with Governor General Lord Moira’s entourage during his tour of the Upper Provinces between 1814 and 1815 painted several buildings in and around Lucknow. In his watercolor rendition of the Dilkusha, “The Nawab Vizier’s Country Retreat at Dilkusha within a Deer Park”, the corner towers are two-storied and have flat roofs. That is, they do not have the third story nor the conical roofs that we see in later photographs of the building. Sita Ram’s rendition also shows a hipped roof and a pediment crowning the topmost part of the central bay, very much like Seton Delaval. This suggests that the conical roofs of the towers and the flat roof over the central bay were not part of Ouseley’s original design. If present these would certainly have been recorded by Sita Ram. Dilkusha’s altered roofline suggests that significant changes were made to the original building between the mid-1820s and 1850s. The Darshan Vilas Kothi built in the 1830s sports a façade similar to that of the redesigned Dilkusha, and we may surmise that the alteration of Dilkhusa’s design took place at about the same time, during the reign of Nasir-ud-din Haidar (r.1827-1837). The formal repetitions in Dilkusha and Darshan Vilas signalled a unified representation of the nawab’s palaces: now Dilkusha could be seen as properly terminating the Hazratgunj axis of palaces.[iv] 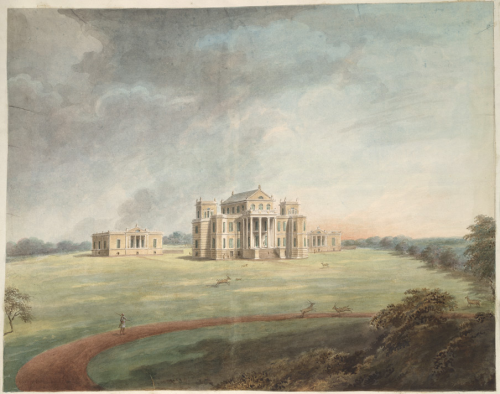 'The Nawab Vizier's country retreat at Dilkusha within a deer park' by Sita Ram, 1814. British Library, Add Or 4763

The 1830’s renovation raised the stair towers higher allowing a covered access to the flat roof on two sides of the central bay, and the other two towers were given the same treatment for the sake of symmetry. This rooftop terrace space compensated for the absence of a secluded courtyard, and would have been a boon for the women of the royal household who could use this open-to-sky space for recreation.

The uninterrupted view of the city and its surroundings from Dilkusha’s terrace perch would serve a different role during the revolt, as the building’s excellent location on high ground made it a strategic stronghold. General Colin Campbell’s forces captured Dilkusha from the rebels on Nov 14, 1857, and from there marched to relieve the besieged garrison at the Lucknow Residency. Surveillance of the enemy in the trenches along the neighbouring Martinière from the rooftop of Dilkusha went hand in hand with the pleasure of surveying a landscape: even amid the tumult of raining shots, Times correspondent William Russell found the panorama of the Lucknow skyline exceptionally charming (Russell, 253-54, 257). On 24 November 1857, General Henry Havelock died at Dilkusha, although he was buried in the quieter precincts of Alam Bagh. As both Edith Cuthell and Sidney Hay pointed out, there were only a few named graves at Dilkusha (Hay, 111).

Unlike the Residency at Lucknow which was severely damaged under fire from rebel forces during the prolonged siege, Dilkusha survived the conflict. And unlike the Residency which was kept in its damaged state as the most prominent memorial monument in Lucknow, Dilkusha Palace and grounds, along with adjacent Mohammad Bagh, were annexed to create the new military cantonment of Lucknow. Appropriation of land and repurposing of nawabi buildings in Lucknow by the victors were sanctioned by British colonial authorities (Oldenburg, 1984).[v]

“For years,” Abbas Ali noted, Dilkusha served as the residence of the Division Commander, Lucknow Cantonment. Samuel Bourne’s c1864 photograph and photographs taken from the mid-late 1860s, such as Baker and Burke’s photograph in the Edward Molyneux Collection, show a well-kept ground and a building in use. 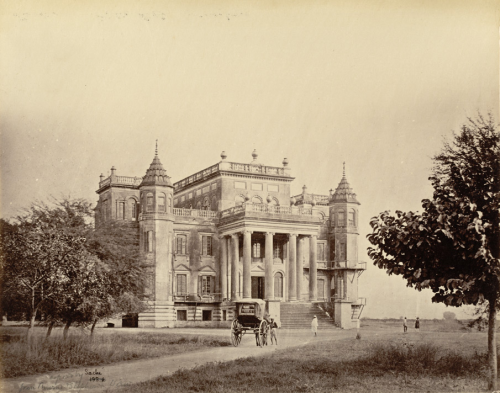 Although Abbas Ali’s c1870 (or possibly late 1860s) photograph show some signs of disrepair, the building appears intact. Abbas Ali’s album was published in 1874 where he noted Dilkusha’s altered state: “it has lately been dismantled, and although it is built on an eminence, nothing can now be seen of the once noble edifice, but its bare massive walls and castellated stair-cases (Ali, 1874). Sidney Hay writing six decades later remarked that the building was “declared unsafe” and “partially demolished and lies almost derelict now” (Hay, 112). 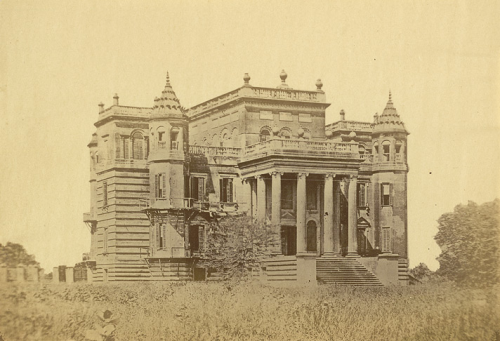 The first photographs to show the ruined building are from the late 1870s. The photograph by John Edward Saché (below) depicts the ruined shell of the building: the roofs over the portico, the central bay and the towers are gone leaving the truncated free-standing columns. 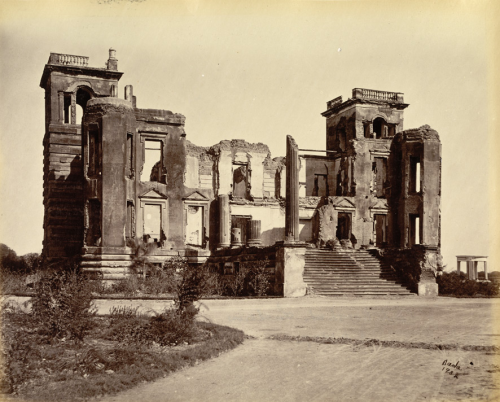 Two photographs from the early 1880s--Lala Deen Dayal’s view of Dilkusha and another from the Bellew Collection--show the building overgrown with vegetation. 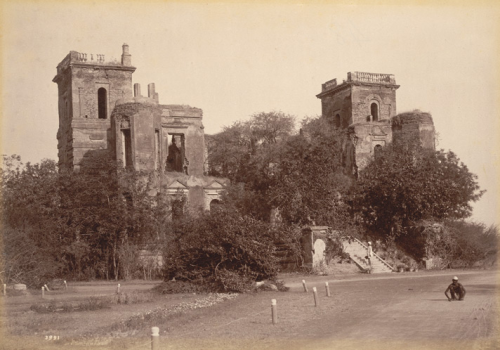 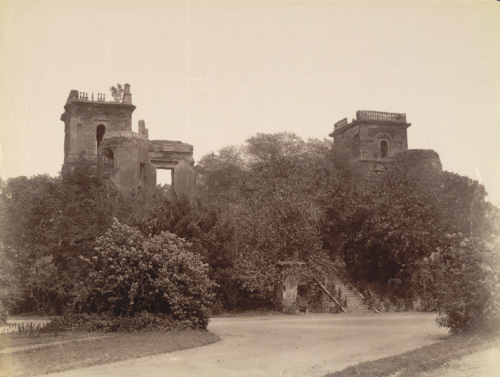 So why this belated partial destruction of Dilkusha? One photograph from the Bellew Collection from the 1880s helps us understand the new aesthetic role the edifice now played. The photograph shows a picturesque garden with roses and urns planted around the palace, and the ruined edifice turned into an uninhabitable landscape folly. The commemorative function of ruins that this landscaping was meant to invoke stirred Cuthell’s mutiny nostalgia: looking at the ruined central tower of the palace in the fading light of the evening she imagined “silhouetted … against the moon, ‘the banner of England blew’” (165). 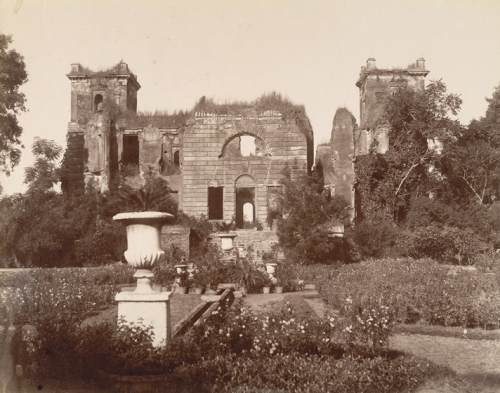 At a larger scale, the dismantled Dilkusha satisfied the needs of a territorial aesthetic in excess of its role as a memorial. The newly designed Dilkusha grounds became an important landscape link between the cantonment gardens (former Muhammad Bagh) and the series of parks that were created after the revolt in a refashioned Lucknow: Government House Gardens, Wingfield Park, La Place, and the Horticulture Garden. The style of these parks was decidedly English colonial and their scale more lavish than the gardens of the nawabs.

Edith Cuthell’s recollection of Lucknow brings out the character of these connected landscapes that encircled the older native city on the right flank, mimicking the lines of British military advance on rebel Lucknow. She could ride uninterruptedly from the cantonment to the northern outskirts of the city, past this string of landscaped spaces, surveying the remains of the vanquished “splendours of Oudh sovereignty” (57). Cultivating such habits of seeing and moving through the landscape brought out “the sharp contrast between the present and the not-so-far past—the gay gardens round deserted palaces; the shot-riddled pleasure houses, with loop-holed walls; the laughing, chattering English men and women riding and driving about them just as before; the iron heel of the conqueror planted on the neck of the salaaming native.” Such contrast, however, only reinforced the in-between “interlude of massacre” (184).

[i] Cuthell used English translations of all the Urdu proper names of buildings and gardens of Lucknow.

[ii] In colonial documents the building is variously spelled as Dilkhusa, Dilkoosha, Dil-Koosha and Dil Koosha.

[iii] Seton Delaval was designed in 1718 by John Vanbrugh for Admiral George Delaval.

[iv] Since Ouseley left for England in 1823 he would not have been the architect of these transformations.

[v] Many of the other damaged nawabi buildings in the city became government offices and others such as the Chutter Munzil and Khurshid Munzil were restored were given over to private agencies. The Chutter Manzil housed the United Services Club, and the Khurshid Munzil became The Lucknow Girls’ School (later renamed La Martinière Girls’ School).

By Professor Swati Chattopadhyay, University of California at Santa Barbara.