The Javanese 'Chronicle of the Kingdoms': Babad Kraton

Today’s guest blog for the Javanese Manuscripts from Yogykarta Digitisation Project is by Prof. Merle Ricklefs of the Australian National University

Despite the simple opening frames, devoid of colours and gold, this Javanese manuscript of Babad Kraton, ‘Chronicle of the Kingdoms’ (British Library, Add 12320), is one of the most important documents shedding light on the intellectual and cultural framework of the court of the Yogyakarta Sultanate in the later 18th century. The work has received considerable attention: I’ve discussed it particularly in my books Jogjakarta under Sultan Mangkubumi 1749-1792 (1974), War, culture and economy in Java 1677-1726 (1993) and The seen and unseen worlds in Java 1726-1749 (1998), and the text has been published in transcription by I. W. Pantja Sunjata, Ignatius Supriyanto and J.J. Ras (eds and translits), Babad Kraton: Sejarah keraton Jawa sejak Nabi Adam sampai runtuhnya Mataram, menurut naskah tulisan tangan The British Library, London, Add 12320, 2 vols (1992). 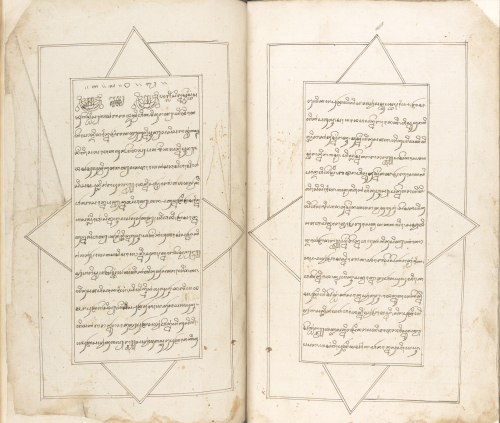 Babad Kraton was written in the court of Yogyakarta in 1777-8. The writer was a son-in-law of Sultan Hamengkubuwana I (r. 1749-92) named Jayengrat. The work begins with Adam, as do many Javanese chronicles (babad) aspiring to a sort of universal history, and continues to historical times. The writer seems essentially to have copied out – perhaps altering to some degree as he did so – pre-existing manuscript copies of such babads to make his new compilation. There are, however, some oddities in this manuscript, the most important of which relates to the date when it was ended. To understand the significance of this, we have to turn to Javanese ideas about cycles of dynastic change.

Javanese sources make clear that there was thought to be a regular cycle of dynastic succession. At each ’00 year of a century, a court (kraton) would fall, and its successor would be established in the ’03 year of the new century. In Java’s poorly institutionalised and frequently unstable states, the widespread expectation that events would unfold in such a sequence made it more likely that they would. If everyone expected a kraton to fall, why bother to defend it when enemies appeared at its walls?

The most prominent example – and the one most relevant to our discussion of Babad Kraton – was the fall of the court of Plered, capital of the Javanese kingdom of Mataram, to a rebel army in the Javanese (AJ) year 1600 (CE 1677). After a period of division and conflict, the new court of Kartasura was founded in the month Ruwah of AJ 1603 (September CE 1680). In this example, the theory and the events were at one.

The next major kraton to fall was Kartasura, but it fell to rebels in June 1742, equivalent to Mulud AJ 1667, 33 years before it should have fallen in AJ 1700, according to the dynastic theory. The successor court of Surakarta was occupied in February 1746, equivalent to Sura AJ 1671. Surakarta was clearly the successor to Kartasura but, as far as the century cycle of kratons was concerned, as Hamlet famously lamented, the times were ‘out of joint’. Who, in 18th-century Java, was going ‘to set it right’? 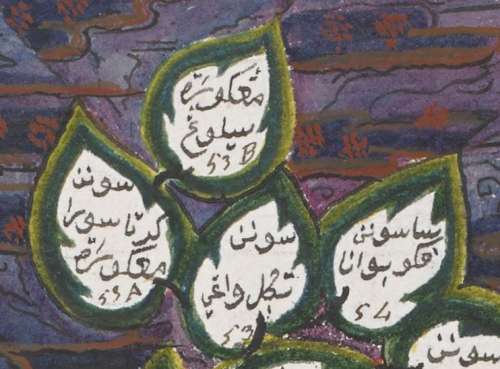 When Jayengrat sat down to write out Babad Kraton, the Javanese courts were facing another turn of the dynastic cycle. The Sultanate of Yogyakarta might have felt the more threatened by the supposed supernatural forces that drove this cycle. Surakarta had clear precedents going back to previous kratons, but Yogyakarta was where the rebel prince Mangkubumi was declared king in 1749 and his permanent court was established after the end of warfare in 1755. What were its immediate predecessors? How could the supernatural forces surrounding the century cycle be managed when there were two rival courts in existence? Would one fall in AJ 1700 (March 1774-March 1775 CE)? Would a new court arise in AJ 1703 (February 1777-January 1778)?

Several measures were taken by the two courts in the years leading up to AJ 1700 to stabilise the politics of Central Java. Land agreements and legal codes removed potential sources of conflict. Then, at least in Yogyakarta, it seems that supernatural forces were mobilised through literature to protect the court in the challenging period AJ 1700-03.

In the month Muharram, the first month, of AJ 1700 the Yogyakarta Crown Prince (later Sultan Hamengkubuwana II) composed a vast (and beautifully illuminated) pseudo-history and prophecy entitled Surya Raja. It was about a court – which clearly represented Yogyakarta – and how it would triumph in unifying a divided kingdom. In the end, this court would also oversee the conversion to Islam of infidel intruders – clearly representing the Dutch – and their reconciliation with the ruler of pseudo-Yogyakarta. How – or indeed whether – Yogyakarta court dignitaries actually expected this to happen in the world of Realpolitik is unclear. But it is reasonable to accept that this book (which is now regarded as one of the sacred, supernaturally powerful regalia of the Sultanate) was a step to neutralise the threat posed by the arrival of the year AJ 1700.

AJ 1700 passed without a new war breaking out or a court falling. Nevertheless, there was still the question of how to understand AJ 1703 when it arrived. Would a new court be founded?

This is where Babad Kraton appears to have played a role. Jayengrat began his writing in Ruwah AJ 1703 (September CE 1777) – the centenary of the founding of the court of Kartasura. The century cycle is part of the history retold in the pages of Babad Kraton and surely must have been in Jayengrat’s mind (and that of the rest of the Yogyakarta kraton elite) when he began to write his chronicle at this time.

In February 1778, Jayengrat brought his chronicle to an end – for the first time for, as we shall see, there was a second ending. He first drew the chronicle to a close just after the founding of Kartasura in Ruwah AJ 1603 (September CE 1680), which is described on f. 395r. On f. 398r. (transcribed in Pantja Sunjata et al., vol. ii, p. 52), he wrote a concluding passage, saying that the writing came to an end on 19 Muharram AJ 1704 (17 February CE 1778) and particularly admonishing readers and listeners to ponder that date. Ff. 398v. and 399r. are without text (except for the last words of a blessing which the writer invoked), but they have borders marked which are identical to the beginning and the end of the MS. This was clearly where this babad was supposed to end. F. 399v. is blank. 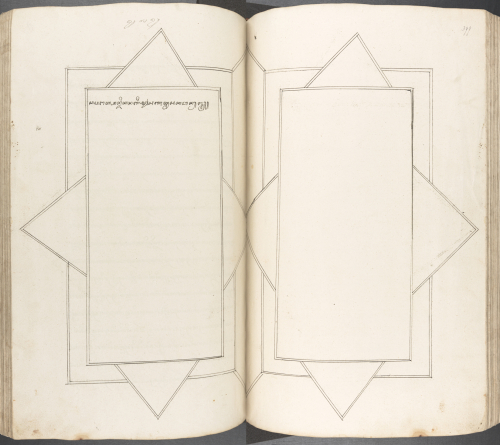 We may deduce that this babad – written on the centenary of the founding of Kartasura and ending with the account of Kartasura’s foundation in AJ 1603/CE 1680 – probably was intended to say that the century cycle was intact and, crucially, that a divided kingdom was part of the cycle. In AJ 1704/CE 1778, just as a century before, the kingdom was divided between two courts. In the earlier century, one monarch was in Kartasura while his brother occupied the previous court in Mataram (where Yogyakarta was located). This was a historically correct depiction.

But someone – Jayengrat, the Sultan, whoever – must have quickly realised that the precedent for division in AJ 1704/CE 1778 was inauspicious. That division in AJ 1603/CE 1680 had ended in the victory of Kartasura over the rebel brother holding out in Mataram. It was, that is to say, a precedent for Surakarta (as Kartasura’s successor) to be victorious over Yogyakarta (Mataram’s successor).

So Jayengrat took up his pen again. On f. 400r., he began writing the text exactly as it was written on f. 398r. (Pantja Sunjata et al., omit the repetition). But this time around, the date of completion was omitted; instead, the text carries on with more cantos. If ff. 398r. to 399v. had been removed from the MS, the text would have carried on seamlessly without the ending originally written there, and there would have been no sign that an earlier ending had been planned but then abandoned. Fortunately for us, whoever was responsible for the final polishing of the MS, including removing ff. 398r. to 399v., failed to do her or his job. So we are left with evidence supporting our deductions about the ideas of court circles.

Jayengrat wrote on for another three months. He made a mistake in this part of his babad. Was he getting tired of the whole enterprise and becoming careless? At the end of each canto in Javanese verse texts, there is commonly word-play signalling what metre would be used in the following canto. This was to assist people performing the text orally, to know which of the fixed poetic metres to use when beginning to sing the next canto. On f. 631r., Jayengrat ended Canto 150 with a signal that the next canto would be in Asmaradana metre. And so it is. But he must have put down the exemplar he was working with and when he picked it up again, or when he picked up another to copy from, he started with an Asmaradana canto from a much later period. He thereby managed to omit events over the years 1719-41 CE.

Probably unaware of this error, Jayengrat wrote until May 1778. He again brought his copying to an end, but this time the last significant event was the fall – not the foundation – of Kartasura in Rabingulakir AJ 1667/CE 1742 (we ignore a scribal error in this date). This is described on ff. 714v.-715r. (trancribed in Pantja Sunjata et al., vol. ii, p. 430).

Given the clear evidence that trouble was being taken to get dates and precedents right, we may reasonably conclude the following from this new ending. Courtiers who knew of this account could accept – we may say, they could pretend – that the century cycle was working. Kartasura had been the last kraton to fall, as it should have been, having been founded in AJ 1603/CE 1680. By omitting all the history since that date, Babad Kraton seems to have implied that Yogyakarta could regard itself as the new court for the new century. That is not the way history had worked out – and all those Javanese aristocrats knew this was so – but in the world of literature and literary magic, it could be made to seem so.

The looming threats of the ’00-’03 cycle had been surmounted. Literature provided a transition which history had stubbornly refused to do. Yogyakarta could be considered as a legitimate court in the new century, representing no violation to the chronological cycle of kratons.

When the British sacked the court of Yogyakarta in 1812 and carried off the Babad Kraton manuscript (along with many others), they brought us this fascinating object for our literary detective work. 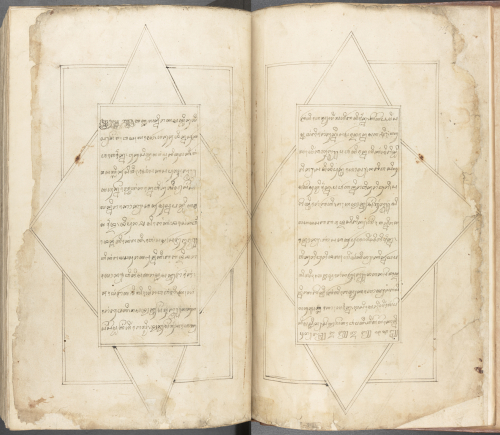 Posted by Annabel Gallop at 8:40 AM