The Judeo-Persian manuscript collection in the British Library

The newly launched Judeo-Persian collection guide is an important and valuable addition to the British Library’s repertoire of Middle Eastern on-line resources, that have been made accessible to increasing numbers of researchers and users worldwide. Additionally, as part of our on-going Hebrew Manuscripts Digitisation Project, we have already digitised 34 Judeo-Persian manuscripts and will continue to do more in the months ahead. 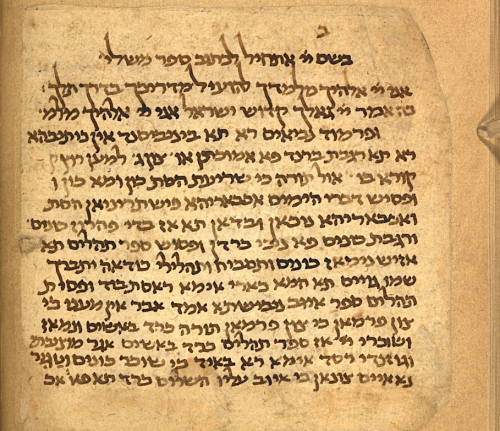 Judeo-Persian introduction to the commentary on Proverbs, 11th-2th century (BL Or 2459, f.64v)

Introduction and brief historical note
Although quantitatively modest, the diversity and richness of its content, and the indisputable rarity and significance of some the items found in it, make the Judeo-Persian manuscript collection stand out. It moreover attests to the close, centuries-old cultural and historical ties that have existed between local Jewish and Persian communities.

These links can be traced back to pre-antiquity, more precisely to the period of the Babylonian captivity when, in 597 and 586 BCE, the entire Jewish population in the Kingdom of Judea was exiled by King Nabuchadnezzar II. In 539 BCE Babylon fell to the Persian Emperor Cyrus the Great whose famous declaration, recounted in the Bible, and alluded to in the famous Cyrus Cylinder, allowed the Jewish exiles to return to their homeland, rebuild their national life, and most importantly, the Jerusalem Temple which Nabuchadnezzar had sacked and raised to the ground.

Those exiles who decided to remain on Babylonian-Persian territory, formed the core of the permanent Jewish settlements, which little by little spread from the Babylonian centres, to the inner cities and regions of Persia. The tolerance showed by Persian rulers towards their Jewish subjects, especially during the early medieval period, enabled them to prosper and thrive. Biblical luminaries such as Zerubbabel, Ezra and Nehemiah for instance, emerged from the newly established colonies, and managed to play leading roles at the royal Persian court.

The history of Persian Jewry is an extensive and fascinating topic, which is far beyond the scope of this short blog. For a clear and concise historical account of the Jewish communities that lived in Persia, from antiquity to the modern era, I recommend Elias J. Bickerman and Walter Joseph Fischel's article "Persia" in Encyclopaedia Judaica, 2nd ed., 2007, vol.15, pp.782-792.

The Manuscripts
The star item in our Judeo-Persian manuscript collection is undoubtedly the eighth-century trade letter found in 1901 in a Buddhist monastery at Dandan-Uiliq, present-day Xinjiang, China (Or 8212/166). Information recently received from a reliable researcher, who has studied in-depth a number of our Judeo-Persian manuscripts, has revealed that the biblical commentaries in Or 2459 and Or 2460, are in fact datable to the 11th to 12th century, i.e. some 400 years earlier than George Margoliouth let us believe (G. Margoliouth’s Catalogue of the Hebrew and Samaritan manuscripts in the British Museum, 1965, vol.1, pp.184-185). This discovery makes them the second earliest Judeo-Persian manuscripts in our keep.

The blog Important Judeo-Persian bibles in the British Library posted in 2014, provided descriptions of the rarest handwritten and printed Judeo-Persian biblical works the Library holds. These included the Pentateuch dated 6th March 1319 CE (Or 5446), regarded as the earliest dated Torah text in Judeo-Persian, and the beautifully crafted copy of Torat Adonai (God’s Law) issued in 1546 at Constantinople, by Eliezer ben Gershom Soncino. In this edition, the Judeo-Persian tafsir (translation) was printed alongside the original Hebrew text, the Aramaic translation, and the Judeo-Arabic rendition of the eminent rabbinic authority and scholar Sa’adia Gaon (882-942 CE). The Torat Adonai, moreover, was the first printed Persian text of any kind, and the first Judeo-Persian translation of the Pentateuch to become known in the Western world.

The number and quality of our illustrated Judeo-Persian manuscripts are comparatively few and unrefined, yet pleasing nevertheless. Apart from the better-known Or 13704, which was the subject of a special blog posted last year, A Judeo-Persian epic, the Fath Nama (Book of Conquest), there are two other specimens which exhibit stylistic traits common to both Persian and Judeo-Persian manuscript painting. Lack of a colophon (the inscription at the end of a manuscript providing details about its production), is an additional common characteristic defining the manuscripts discussed here. Consequently, data about the original commission, and most importantly the identities of the artists responsible for the illustrations, remain shrouded in mystery.

Or 4730 is an incomplete 18th-century paper manuscript of Nizami’s Persian medieval epic Haft Paykar (The Seven Beauties). The text has been copied in a neat Persian Hebrew semi-cursive script as can be seen here: 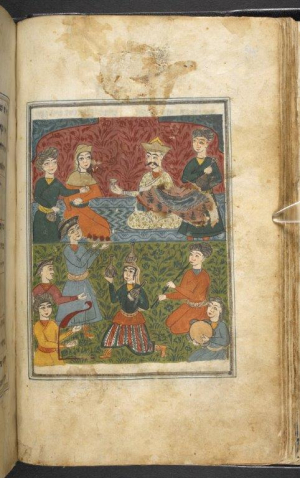 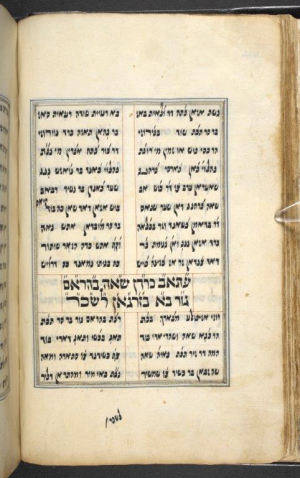 Left (f.49v): a royal feast showing Bahram Gur in the upper register, offering a cup to the lady seated on his right. Below, musicians are seen playing on a lyre, flute and tambourine, while a female performer executes a balancing act with bottles; right (f.44v): an example of the neat Persian Hebrew script used throughout (BL Or 4730)

Nizami Ganjavi (1141-1209) is acknowledged as the greatest romantic epic poet in Persian literature, with the Haft Paykar perhaps regarded as his masterpiece. A polymath with a phenomenal intellect, Nizami was not only versed in Arabic and Persian literature, but was also intimately familiar with diverse fields of knowledge, ranging from astronomy, astrology, botany, mathematics, to medicine, Islamic law, history, philosophy and many other. In the Haft Paykar Nizami succeeded in illustrating masterfully the harmony of the universe, and the affinity between the sacred and the temporal. Nizami’s erudition and scholarship are perfectly reflected in his intensely lyrical and sensory poetical output, earning him the well-deserved appellation of Hakim (Sage). 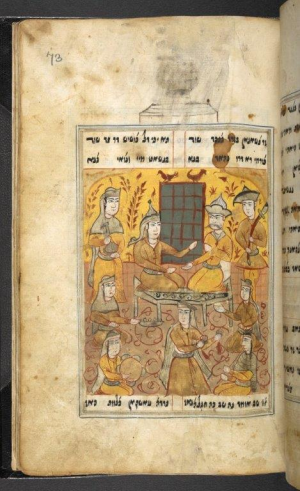 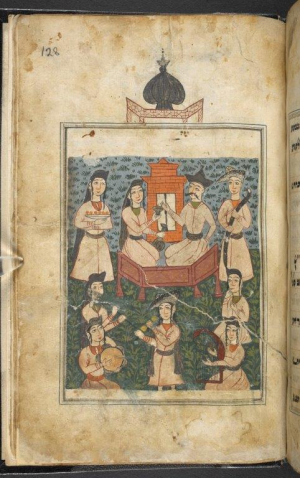 Completed in 1197, Haft Paykar was a romanticized biography of Bahram Gur (the Sassanian ruler Bahram V, ruled 420-438 CE). The Seven Beauties were princesses who became Bahram’s wives, and who received their own distinctly colored and themed pavilions in his palace. The princesses would entertain the king with compelling and captivating stories, whenever he visited them. In the story, Bahram’s royal prowess was tested, and he had to learn lessons on fairness, justice and responsibility. The 13 illustrations in our manuscript depict scenes closely related to the central narrative. Though crudely drafted, they are nonetheless likeable, owing chiefly to their colors, as attested by the examples included above. 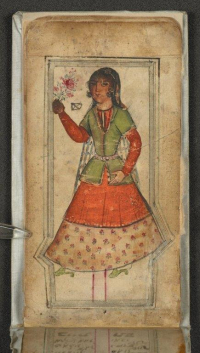 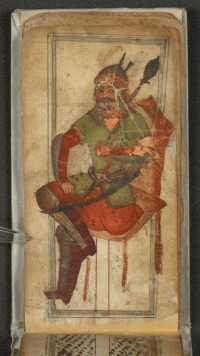 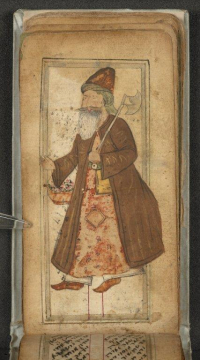 Written on thick paper between 1785 and 1825, the album Or 10194 is a poetical anthology by various poets. The poor calligraphy is mitigated by the five full-page vividly coloured paintings executed in opaque watercolors. These are effectively portraits of various characters, executed in traditional Qajar style.

The largest portion of our Judeo-Persian holdings, however, are unadorned textual manuscripts. Among them the following are worthy of attention:

In this blog I have endeavored to discuss significant collection items written in Judeo-Persian, pinpointing at the same time some commonalities and differences between them and Persian manuscripts. Place of production, artistic and thematic elements, along with language and history, constitute principal areas of intersection, that offer ample scope for discovery, interpretation and research.

Watch out for my follow-up blog, when I will be focussing on the Judeo-Persian printed book collection the Library owns.

Posted by Ursula Sims-Williams at 10:46 AM