Tales of cats and dogs

The new exhibition in the British Library’s Entrance Hall, Cats on the Page (until Sunday 17th March 2019), provides a fascinating glimpse of how cats come to life in books. One of several items from the Japanese collections in the exhibition is The Boy who drew cats, rendered into English by Lafcadio Hearn. This story was issued in the Japanese fairy tale series published by Hasegawa Takejirō from 1885, which also included another cat-related tale, Schippeitaro, by Mrs T.H. James, published in 1888. Although the cover illustration of Schippeitaro showing cats dancing in a circle is rather light-hearted, these cats are not simply cute creatures. 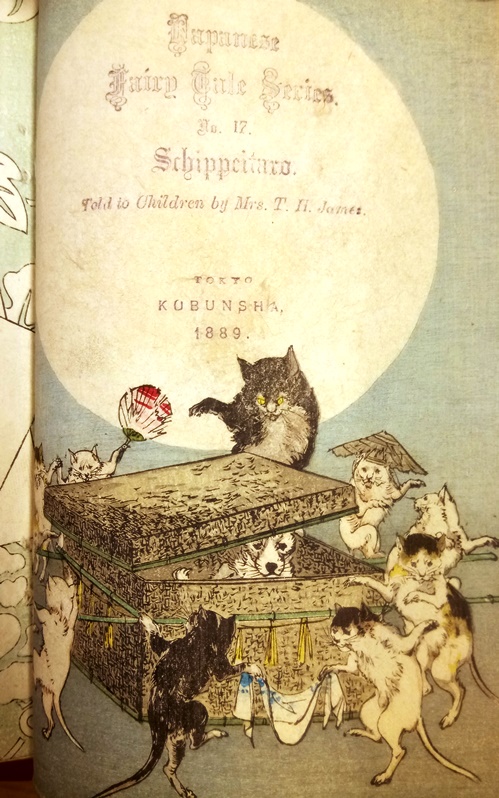 The cover of Schippeitaro, showing a dog in the basket and cats dancing around him in a circle. Mrs T.H. James, Schippeitaro. Tokyo: Kōbunsha, 1888. British Library, ORB.30/4013

Interestingly, the preface of the tale has nothing to do with cats, but concerns a dog and his image on an Ofuda. Ofuda are paper or wooden amulets issued by Japanese religious institutions to protect their owners from various evils. This image is described as “The picture of the dog, a copy of one now issued from Mitsumine or Mitakesan to the faithful who reverence it as Okuchishinjin, the large mouthed god”. 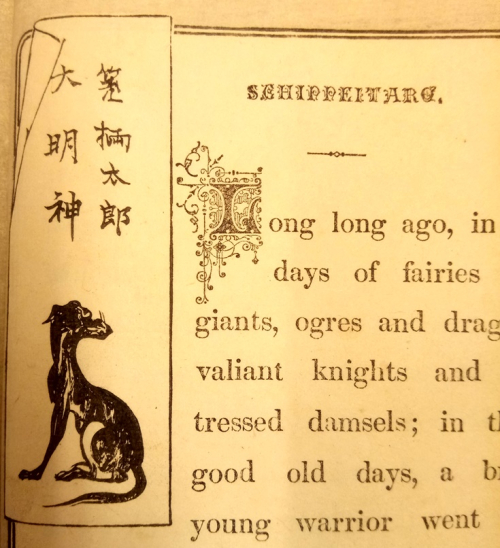 Close up of the first page of the tale, showing a fictional Ofuda of Shippeitarō Daimyōjin. Schippeitaro, 1889. British Library, ORB.30/4013

'Okuchishinjin' must have been a mis-transliteration of the characters 大口真神, which should have been read either as Ōkuchi no magami or Ōguchimagami, a Japanese wolf who plays the role of a divine servant in Shintō belief. Traditionally people affectionately call him Oinu-sama (お犬様), meaning a holy dog. He is strongly associated with Yamato Takeru (日本武尊), a legendary prince of ancient Japan, who is believed to have established Mitsumine Shrine (三峰神社) on his way to the East Country, where the power of the emperor of Japan had yet not been accepted. There is a well-known story of the wolf who guided Yamato Takeru, when he lost his way in the deep mountains of Musashi province. Latterly Yamato Takeru entrusts the protection of the Musashi mountain area to the wolf, so this is why both Mitsumine Shrine and Musashi Mitake Shrine (武蔵御嶽神社) worship Oinu-sama, and his Ofuda is believed to ward off devils and thieves. 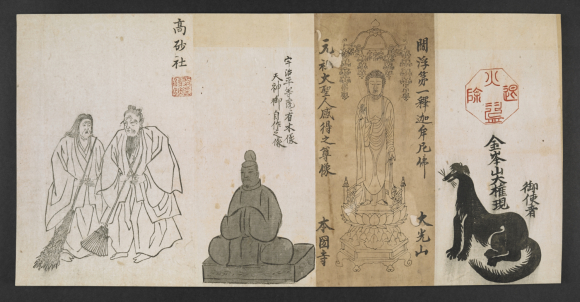 This Ofuda (far right) is possibly from the Mitake Shrine. [The original place of worship in Musashi province was believed to have been founded in 91 BC. Later it joined the Grand Head temple of the Kinpusen Zaō Gongendō (金峰山寺蔵王権現堂) in Yoshino (吉野) and became well known as Mitake Zaō Gongen (御嶽蔵王権現). In the late 19th century, the Meiji government ordered religious institutions to follow the policy of the separation of Shinto from Buddhism, and the name was changed to Mitake Shrine (御嶽神社) in 1874.] The Ofuda shown is from a collection of c. 330 Japanese amulets printed up to the 1880s, mounted in 5 albums. Ofuda harikomichō : Daiei Toshokanzō お札貼込帳 : 大英図書館蔵. British Library, 16007.d.1(1) 60-63

The legend of Yamato Takeru and the wolf may be an early example of a theme familiar in Japanese tales, of the hero’s journey with a faithful dog. However, in Schippeitaro (竹篦太郎) the true hero is probably not the warrior, but the eponymous dog of the story. A young travelling samurai warrior gets lost in a thick forest on a wild mountainside, with no human inhabitants in sight. Fortunately, he comes upon an empty and half-ruined temple, to serve as his shelter for the night. In the middle of the night, he hears a strange noise and witnesses an extraordinary scene, of a troop of cats dancing in a circle under a beautiful full moon, singing “Tell it not to Schippeitaro! Keep it close and dark!” 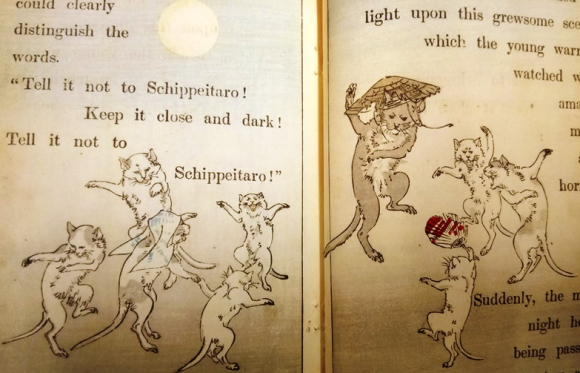 All the cats are depicted standing on two legs, chanting and dancing under the moonlight, with one on the left page with a Tenugui, Japanese traditional towel, on his head. Schippeitaro, 1889. British Library, ORB.30/4013

The mysterious night passes and by the time dawn arrives, the cats have gone and the samurai manages to discover a path to reach a village. The villagers are overcome by grief because they have to send a fine maiden to a mountain spirit as his sacrifice. The villagers have no choice but to put the victim into a bamboo trunk and leave her in the ruined temple where the samurai warrior had just spent the night. He wants to help the girl and the villagers, so he tells them what he saw the previous night, and asks who Schippeitaro is. He finds out that Schippeitaro is actually a strong and beautiful dog, belonging to the master of the area. The master agrees to send the brave Schippeitaro to the village, and it is Schippeitaro instead of the maiden who is put into the bamboo trunk, and then waits quietly in the ruined temple. 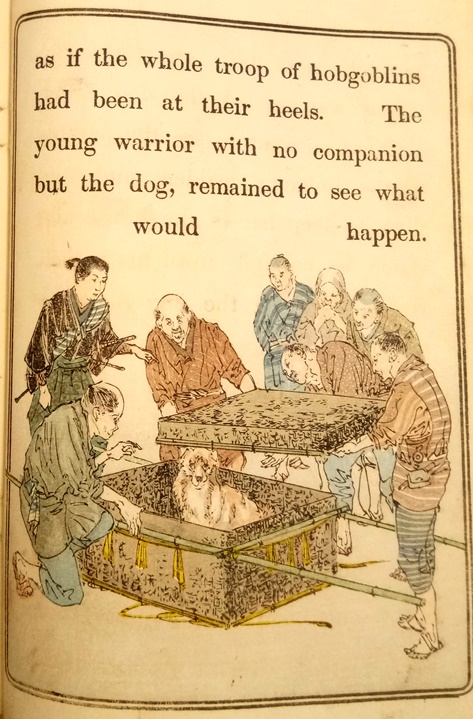 Schippeitaro, the dog of whom the troop of cats are so afraid, in the bamboo trunk while on his mission to save the maiden and the village. Schippeitaro, 1889. British Library, ORB.30/4013

At midnight, the troop of cats arrives, led by a huge black boss cat. The fearless Schippeitaro attacks the boss, seizes him with his teeth and holds him fast, so that the young samurai can finish the monster off with one stroke of his trusty sword. The village no longer has to provide a sacrifice and Schippeitaro returns to his master, showered with gratitude by all. The boss black cat approaching the sacrifice with his troop, while Schippeitaro patiently hides inside, waiting for the best moment to attack. Schippeitaro, 1889. British Library, ORB.30/4013

Superstitious Japanese used to believe that if Japanese cats lived too long, they would turn into monster cats Nekomata (猫又) by practising a mysterious ceremony, dancing in a circle in the middle of the night, ideally covering their head with a Tenugui towel. Although the mountain spirits are depicted as cats in this particular tale, they are usually baboons or monkeys in variations of the original Japanese legend. It was thought that when Mrs. T.H. (Kate) James was working on the English text of Schippeitaro, she probably replaced baboons, which were not familiar to 19th century English readers, with cats. 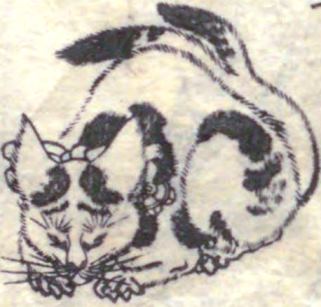 We don’t know the exact reason for Mrs James' choice of cats instead of the other options available to her; perhaps, she was inspired by the legend of the mysterious dancing cats. All we know is that the motif of the dancing cats added a somewhat more humorous flavour to the story than savage baboons would have done.

Posted by Annabel Gallop at 9:04 AM