The Other March of the Penguins: A Flightless Mascot for Dissent in Turkey

In advance of Penguin Awareness Day on Sunday January 20, we tell this story of how a bumbling and beloved resident of the globe’s southern shores became a symbol of dissent and defiance for a generation of Turkish citizens. 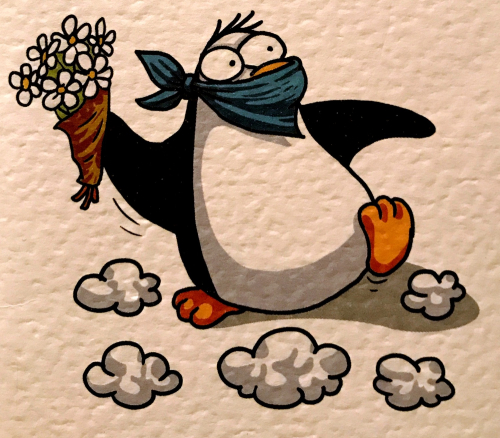 Çapulcu Penguen, or Looter Penguin, is the cuddly mascot of Penguen magazine dressed as a masked demonstrator from the Gezi Park protests. At the start of the demonstrations, then-Prime Minister Reccep Tayyip Erdoğan referred to the protestors as çapulcular - looters or marauders - as a way to discredit their movement. Cover of a Çapulcu Penguen notebook, Istanbul: Penguen, [2015?]

On 28 May 2013, a group of environmentalists occupied Gezi Park in Taksim Square, Istanbul. They were protesting the government’s decision to remove one of central Istanbul’s last green spaces in order to make way for a new shopping centre and mosque. When armed police were sent in to remove the protestors for a second time on May 31, the demonstrations ballooned, with 100 000 people marching down İstiklal Avenue, Istanbul’s most prominent shopping street. The momentum of anti-government activism gathered quickly, and soon strikes, occupations, and marches occurred across the country. All manner of calls were made, from the demands of anti-capitalist Muslims and religious minorities, to the concerns of Armenians, Kurds and LGBT people about the abrogation of their rights. 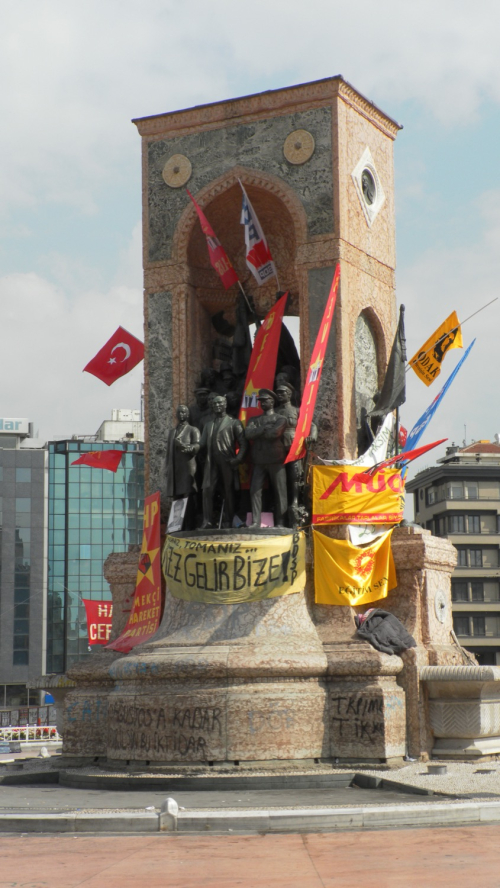 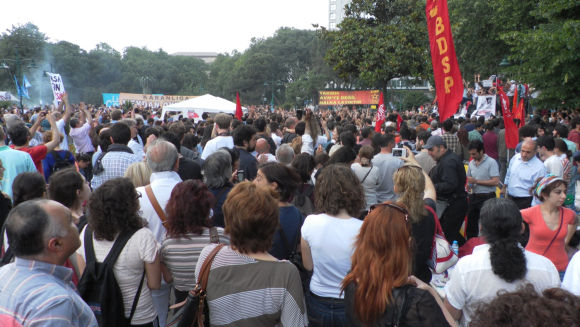 A crowd gathers to listen to speakers at the Gezi Park occupation, June 2013. © Michael James Erdman

On June 2, while foreign media were reporting on the extent of the unrest, Turkish media remained remarkably quiet . CNNTürk, taking its cue from government media outlets, broadcast a documentary about penguins rather than coverage of the protests crippling the country’s economic and political centres. Turks, who have a long, vaunted tradition of political satire , did not waste this opportunity, and soon real and virtual spaces were filled with mocking memes referencing penguins and the government’s refusal to engage with its citizens. Penguins are not native to Turkey; these images were either taken from photographs floating about the Internet or, in the vein of another longstanding Turkish tradition, appeared in cartoon form. Indeed, such 2D animated activists featured prominently in two publications springing from the same spirit of political engagement that fed the Gezi Park Protests which can be found in the British Library’s Turkish collections.

The logo of the publishing group Peng!, resposible for publishing Penguen magazine and the title of the Penguen magazine series, featuring the a determined cartoon penguin with his hang glider. Penguen 2014 Karikatür Yıllığı, Istanbul: Peng!, 2014 (BL YP.2018.b.538)

Penguen 2014 Karikatür Yıllığı, our first example, is a compendium of the caricatures in the satirical magazine Penguen published in the year 2014. The periodical first appeared in 2002, and soon became the most widely sold weekly magazine in Turkey. Its mascot, a chubby penguin notable for his predilection for hang gliders (and flying) was drawn by the cartoonist Selçuk Erdem. The magazine quickly made a name for itself as being fearless in its biting satire. It was promptly sued in 2005 by then Prime Minister Reccep Tayyip Erdoğan because of a cartoon depicting him as a cat. The magazine was acquitted, but continued to face angry responses for its oppositional, pro-secularist stances; its offices were even firebombed in 2012. It was almost serendipitous, then, that penguins should be coopted as a symbol of media acquiescence to and complicity with government repression in June 2013, allowing Penguen to highlight that these cuddly lovers of fish and snowy frolics also have a subversive and revolutionary side. 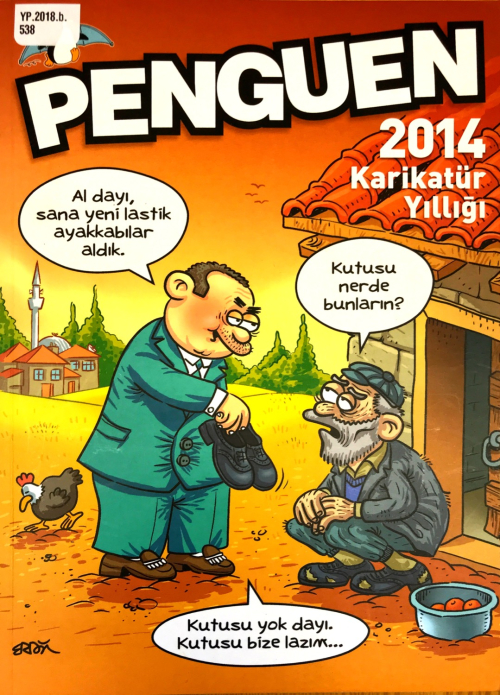 In 2017, Penguen’s owners announced that they would be closing up shop with only a month’s notice. They cited both a decline in magazine readership in Turkey and increased government repression. In their unsigned farewell letter, the editors of Penguen thanked their readers, caricaturists, authors, journalists, and even politicians, “who were guests on our covers and our Agenda pages.” They also speculated that “perhaps one day we will encounter once more a freer Press. If anything remains that can be called the Press…” Over the years, the magazine provided a space for amateur cartoonists to submit their own drawings and rise to prominence. In 2007, six of its cartoonists started up the satirical magazine Uykusuz [Insomniac], which continues Penguen’s mission, and can also be found in the British Library’s collections.

The second penguin-themed publication in our discussion is Raşel Meseri’s Pen Parkta [Pen at the Park, a graphic novel in Turkish, Armenian and Kurmanji Kurdish illustrated by Suzanne Karssenberg. The story follows Pen, a penguin like those featured in the documentary aired on CNNTürk, as he erupts from a TV screen in Istanbul and tours the city. He heads to Gezi Park, eager to liberate his fellow penguins from their televised prisons, and meets up with other furry and feathered protestors along the way, exploring the causes of the demonstrators’ anger, and their hopes for change. The choice of languages is far from random. They represent the communities that came together in Gezi Park to make their voices heard; three tongues that, despite official narratives, have each added their own notes to Istanbul’s harmony. Pen Park’ta uses a simple narrative with endearing and engaging imagery to tell the story of the object’s transformation into subject; of the unwitting liar who becomes a warrior of truth. 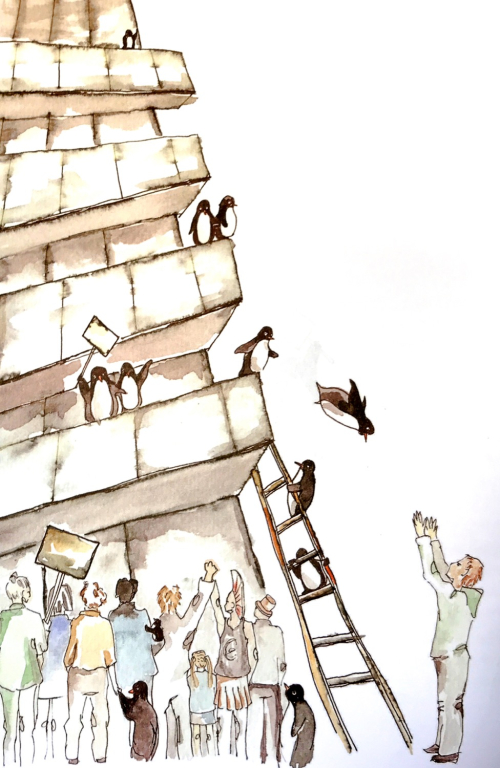 Your average penguin might not have a fist to raise in defiance, but that doesn’t mean that they can’t oppose the powers that be – at least not in Turkey. Indeed, in 2013, this flightless bird, so often characterised as docile, defenseless, and dedicated, became a symbol of resistance and empowerment. It was, perhaps, an apt metaphor for sections of Turkish society in the age of Erdoğan: those who shed their cloaks of passivity to engage in their own March of the Penguins.

Posted by Ursula Sims-Williams at 3:18 PM