Thanks to a partnership between the British Library and the Tashkent State University of Uzbek Language and Literature named Alisher Navoiy, three manuscripts including the poetical works of Alisher Navoiy are now available online. These three items are the first Chagatai-language texts to be uploaded to the Library’s digitised manuscript holdings, a sample of the more than 110 Chagatai and Central Asian Turkic manuscripts held by the British Library as part of its Turkish and Turkic collections. 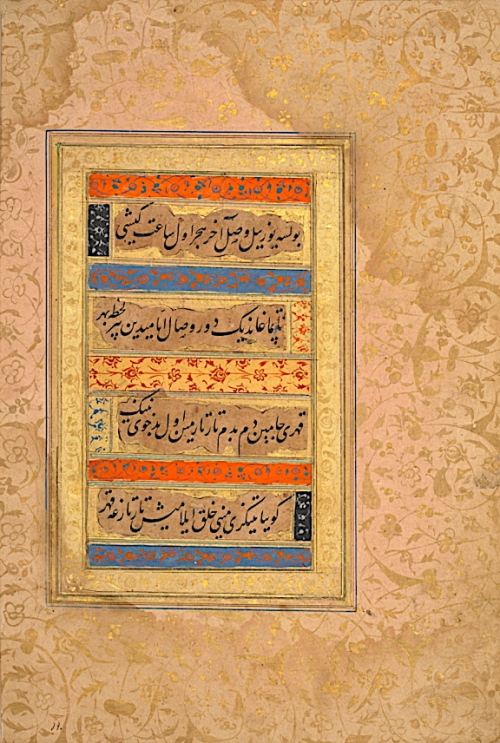 A leaf from the Muntakhab-i Dīvān-i Navā'ī with richly decorated paper appliqués and gold-leaf. Despite the water damage, the manuscript has retained its luxurious beauty. Herat, 15th-16th century (BL Or. 3493, f. 4v)

All three works contain Divans, or poetical compendia, of the work of Alisher Navoiy, also known as ‘Ali Shīr Navā’ī. Navoiy was born in 1441 CE in Herat, Afghanistan, at a time when it was part of the Timurid Empire, and died in the same city in 1501 CE. He is the national poet of Uzbekistan and is regarded as one of the great poets of the mediaeval Turkic world. His broad oeuvre is a testament to the cultural, intellectual and social flowering of Khorasan in the 15th century CE, and to the importance of Herat in the broad mosaic of Turkic cultural production. The works are also an introduction to classical Chagatai, the literary language of Turkic Central Asia and Siberia. Little known or studied today outside of specialist circles, Chagatai was also the language of the Mughals, who established their reign over parts of the Indian Subcontinent in 1526. A rare sketch from inside the Muntakhab-i i Dīvān-i Navā'ī showing a Central Asian man in traditional dress. Herat, 15th-16th century (BL Or. 3493, f. 5v)

Or.3493, the most delicate of our digitised Chagatai manuscripts, is a marvel to behold. Only 9 folios in length, this collection of poems from Navoiy’s divan dazzles with its creator’s penchant for brightly-coloured paper appliqués, gold illumination, and sweeping, bold nastaliq calligraphy. The presence of blue, yellow, green and pink blocks in between the stanzas gives the entire text an architectonic feel; a 3D illusion that draws in the reader. This pattern is broken only by the use of gold separators on later pages, and the appearance of a portly, kneeling Central Asian man on one of the manuscript’s middle folios. Despite occasional water damage – and the fact that the content is itself defective – this small volume remains a testament to the capacity of Herat’s manuscripts producers to create items of luxury and beauty as well as those of functional purpose. 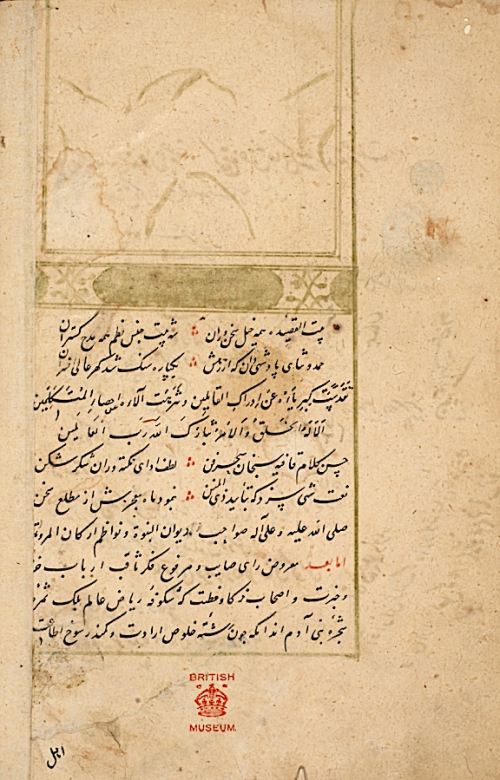 Or.11249, produced in 916 AH (1509-10 CE) in Central Asia, is the least studied of the Chagatai items added to our digital collections. Known as both the Dīvān-i Fānī and the Dīvān-i Navā’ī, it is the most comprehensive of the group with respect to Navoiy’s poetical oeuvre. The use of black ink and red catchwords is far from unusual, and the neatly laid-out nastaliq of the scribe’s hand leads us to believe that this was likely created within a workshop well-versed in the production of divans and other such works. Occasional marginalia speak to the usage of this volume – as does the water damage that stains some of its folios. With further in-depth research on its contents, and a comparison with other contemporaneous Central Asian manuscripts, we might come to know the importance of this particular item within the broader scope of Central Asian intellectual traditions. 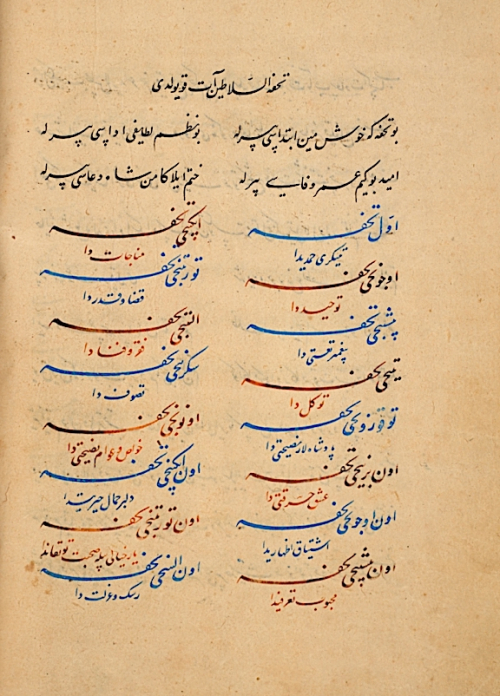 The beginning of the text Tukhfat al-salāṭīn at koyuldu, demonstrating the use of different coloured inks to complement the elegant calligraphy. Mecmua. Herat, 914 AH (BL Add MS 7914, f. 25v)

Add MS 7914, the last of the three manuscripts, is not dedicated to Navoiy exclusively. A mecmua or codex of various works compiled in Herat in 914 AH (1507-08 CE), it contains a variety of different texts created by nine different authors in a myriad of styles. Its breadth of poetic and prose creation and intellectual inspiration speak volumes about the interplay of Turkic and Persian literary traditions across Eurasia. Within these is found Navoiy’s Tuḥfat al-salāṭin, a collection of poems copied out by the scribe ‘Abd al-Jamīl Kātib. The remaining poems are varied in content. Some are works in verse about love and longing, such as Amīrī’s Dah nāmah, which tells a romantic story through ten letters. Others poeticise the Central Asian martial arts, debate the merits of wine and hashish, or adapt circulating Persian forms into Chagatai poetry, as Ḥaydar Talba Khorazmī’s didactic poem based on a Persian version by Niẓāmi so aptly demonstrates. This diversity of content is reflected in the construction of the volume, where naskh and nastaliq, black and coloured inks, chaos and clarity make appearances depending on the demands of the individual patrons, and the skill of the particular scribes.

The British Library’s holdings of Ottoman and Chagatai manuscripts contain another 30-odd texts first penned by Alisher Navoiy. It is our hope that, in the coming years, many more of these will find their way onto Digitised Manuscripts, facilitating more intensive and complete study and enjoyment of Turkic Central Asia’s literary and cultural heritage.

Posted by Ursula Sims-Williams at 12:01 AM