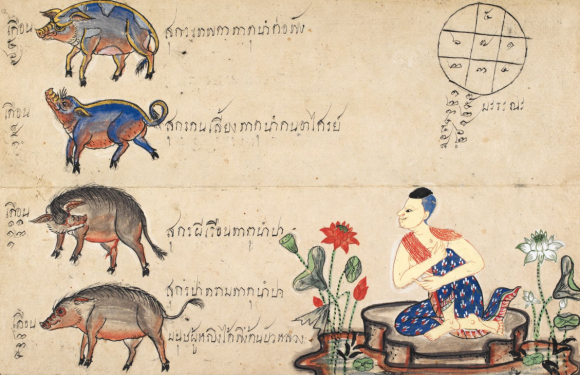 Horoscope for the year of the pig, from a Thai manuscript dated 1885, containing drawings based on the Chinese Zodiac and its animals (BL Or.13650, f.6v )

In East Asian and South East Asian countries, as well as among overseas communities of Asian origin, traditional celebrations for the start of a New Year are approaching. On the 5th of February, we will leave the year of the Dog , and welcome the year of the Pig. Dog and Pig are part of a series of twelve zodiac animals associated with the Chinese lunisolar calendar. The Pig is the last animal of the twelve-year cycle, and in the Japanese and Tibetan traditions is replaced by the Boar. 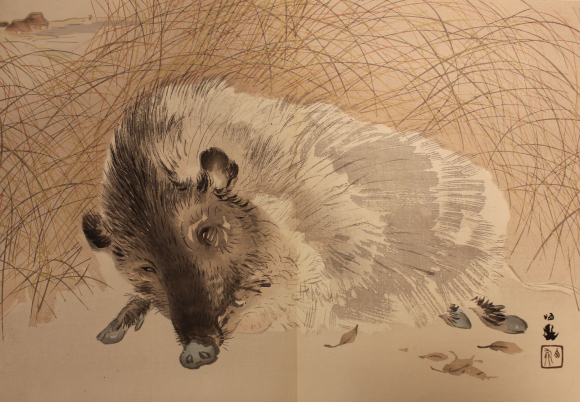 The lunisolar calendar developed in China from the solar one, and was first introduced during the Zhou dynasty (c. 1046 to 256 BC). Years, months and days are calculated taking into account both the phases of the moon and the position of the sun which determines the seasons. Lunisolar calendars require a “leap month” or an “intercalary month” every one or two years. People born during the Year of the Pig, are thought to be clever, calm, mature and well-mannered, but sometimes naïve and insecure. 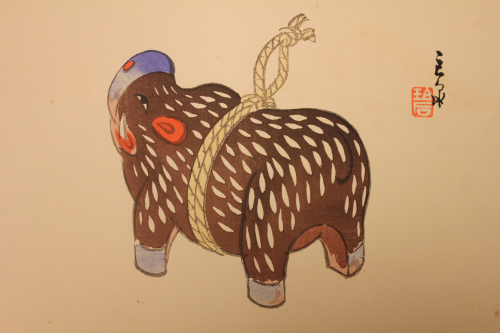 Zhu Baijie (豬八戒, where the first character means “pig”) is probably the most famous pig in Chinese literature. He is one of the main characters of the novel Journey to the West (西遊記Xi you ji) by Wu Cheng’en, published in 1592. The novel narrates the pilgrimage of the Tang dynasty Buddhist monk Tang Sanzang to India and Central Asia along the Silk Road to gather and take to China Buddhist texts. During his journey, he meets three creatures who become his disciples to atone for their past sins: Sun Wukong (the Monkey), Zhu Bajie (the Pig) and Sha Wujing (a water monster or “Monk Sha”). 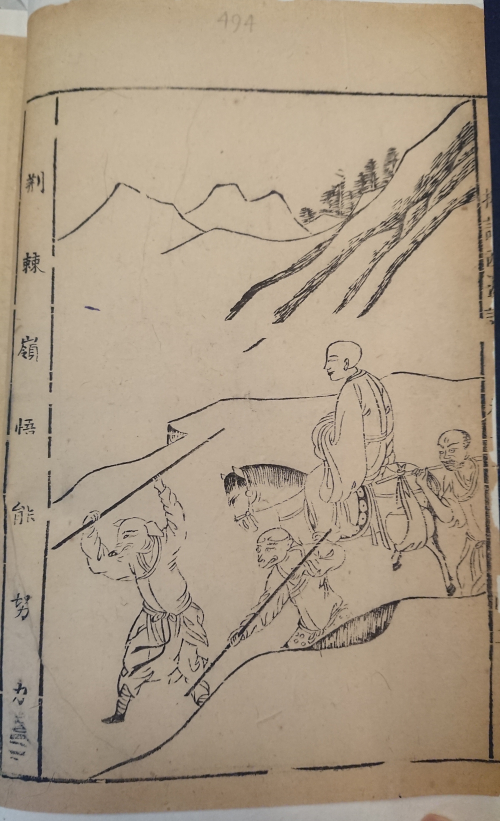 The Chinese New Year is welcomed with fireworks, whose sound, together with the sound of drums and music, is meant to scare away the demon Nian (written 年, like the character for year). Delicious food is put on the table and chun lian (written春聯: good wishes for the new year in form of poems, usually on red paper) are pasted on the entrance doors. Our Curator Han-lin Hsieh wrote a chun lian to wish all our readers a very Happy Chinese New Year! 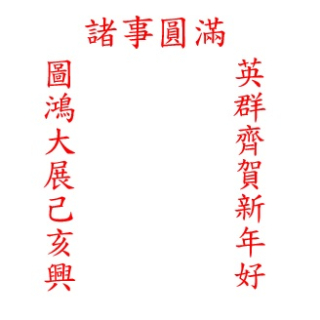 Happy New Year from us to you,

May your triumphs be big,

In the year of the Pig,

And success come with all that you do.