Would you like some help in your pursuit of your beloved? Our Hebrew manuscript collection can offer numerous love potion recipes and incantations, and now is the best time of year to share some of this wisdom with you.

Whether you are a diligent pupil of magic, or just a desperately love sick muggle, you can find a long list of love potions, incantations and amulets by browsing our digitised Jewish manuscripts. Finding the required ingredients and following all of the instructions might prove to be much more difficult. What’s more, the preparation of many of these potions involves starving animals to death, slaughtering, or mutilating them. Such cruelty would be unacceptable nowadays, even in the name of love. Luckily, we have been able to find some less gruesome prescriptions.

The collection at the British Library holds several manuscripts on folk medicine and kabbalistic-medical miscellanies, mostly from the 16th-18th century. Many contain prescriptions of kabbalistic amulets alongside with medical remedies, which demonstrates the lack of a strict differentiation between what we would now call medicine, magic, and astrology. Superstition and the belief in supernatural powers were an inherent part of folk medicine. So do not be surprised if you find a love potion after a protective incantation against dogs, or after a recipe on how to stop nose bleeding. 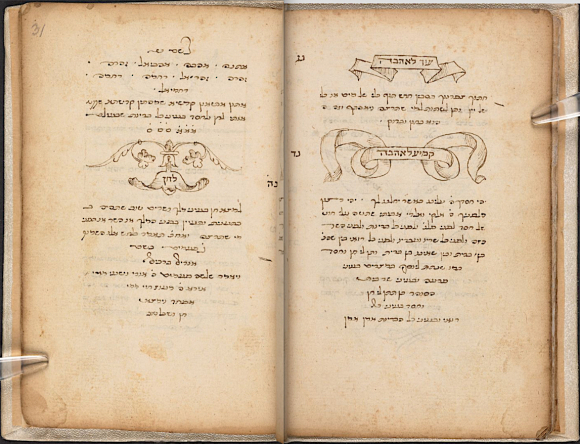 The majority of these magical/medical manuscripts are small in size, and don’t look anything special at first sight. One exception is a 16th-century Italian copy of ʿEts ha-daʿat (Tree of Knowledge) by Elisha ben Gad of Ancona, a treatise containing 125 kabbalistic formulae (kemeʿot). Our copy was written in a neat Italian hand and is decorated with initial-word panels and diagrams throughout. Do not trust the pretty looks though. The scribe made a fatal mistake when copying this love potion. 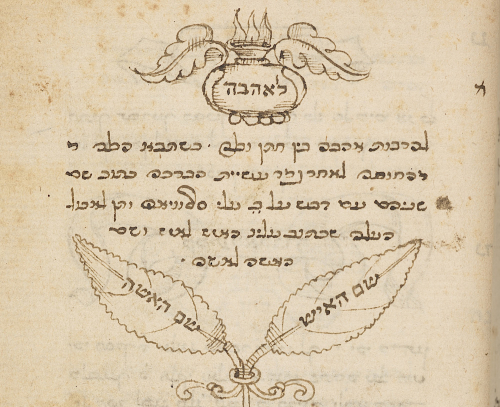 For love – to increase love between bridegroom and bride – when the bride comes from the huppah [canopy under which the Jewish couple is standing during the wedding ceremony] after finishing saying the blessing, write their names in honey onto two sage leaves and give the leaf with the man’s name on it to the man and the one with the woman’s name on it to the woman.

A less impressive volume from the 18th-19th century includes the same recipe but this time correctly (Or 10268). Can you spot the difference?

To increase love between bridegroom and bride – when they come from the huppah after saying the blessing, write their names in honey onto two sage leaves and give the leaf with the man’s name on it to the woman and [the one with] the woman’s name to the man.

This latter manuscript might have been someone’s personal notebook, who took better care when recording the recipe compared to the scribe of the neat looking Italian volume (Or 12362), perhaps because it was for his personal usage?

The recipe must have been considered a very effective one, since we also found it in an abridged form, in a 17th-century Ashkenazi collection of recipes and kabbalistic charms, probably written in today’s Belarus or Lithuania. This version written in Hebrew peppered with some Yiddish, recommends to apply the potion before the wedding night:

Collection of kabbalistic charms and remedies, 17th century: love potion (in the middle) between instructions on how to avoid persecution and how to find favour in the eyes of rulers (BL Or 10568 , f. 10v)

For love between groom and bridegroom at the first night: take 2 Selben(sic!) bletter (‘sage leaves’, in Yiddish) and write on them in honey and give him (ie. them) to eat his name and her name.

It seems that it would be quite easy to make this recipe, and it might be delicious. However, if you do not manage to charm your beloved with honey and sage leaves, you can also experiment with some of the more laborious, but also more gruesome prescriptions. A 17th-century Italian folk medicine collection includes a recipe for a creamy substance that, after having applied it on your face and body, allegedly makes you irresistible. We have not tried it, and are rather sceptical about its success… Moreover, on a practical note, the identification of some of the ingredients is challenging.

For love: take an eye of a frog called 'boten' and an eye of crow and mix them with 'rusṭan' oil and rub it onto your face and body, and every man will love you and you will find favour in the eyes of all those who see you […]

The next recipe found in another 17th-century medical collection is much easier to prepare, though it may be tricky to administer it to the person of your desire.

One more [for love] – cut your nails with a knife and then rinse them in water and give it to drink to whoever you want to fall in love with you or slice up some apple with the nails [put the nail into the apple] and give it to eat.

If you prefer not to bend over a cauldron for hours stirring concoctions, uttering the right magical formulae may also help. You only need a good mirror and some proficiency in medieval magical Hebrew, because the instructions are a bit confusing…

For love – take a clear and good mirror and say to the mirror: ‘Look at my figure and I will look at your figure and you look at her figure and you will make her fall in love with him.’ Do this for three consecutive days and lie on it (the mirror) for three nights and she will love you.

Our collection can offer advice and help also for those who have already found the love of their life, but something or someone has cast a shadow over their marital bliss. This next recipe is especially recommended if you suspect that someone put a curse on your husband. Or if you just want to have a tasty breakfast together.

For love between husband and his wife or even he is under a spell [i.e. impotent]: take spring water, wine, and myrrh, and pepper, and two dove eggs and two hen eggs and break them, and mix them together, and give the mixture to drink to the man and the woman, and they will love each other.

Good luck in your amorous endeavours and if you try any of these recipes, please, send us feedback on how they worked.