The Underground Rainbow: A Look at LGBTI Sources from Turkey in the British Library Collections

February is Lesbian, Gay, Bisexual and Trans (LGBT) History Month in the United Kingdom. In recognition of this event, we are offering a view onto some of our non-English LGBT collections. 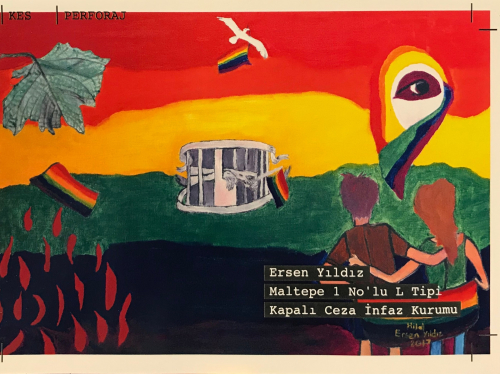 In 1993, Lambda Istanbul was formed to create a safe space for LGBTI [1] people in Turkey, and to fight for their rights. Ten years later, in 2003, Istanbul hosted its first Gay Pride Parade (LGBT Onur Yürüyüşü). A small affair, it was organised by only 30 people. The parade caught on, however, and the next year saw a similar parade in Istanbul and one in Ankara, followed by other cities. By 2013, the Parade ballooned to include an incredible 100,000 people, as supporters and revellers attracted by the parade were joined by those brought out onto the streets by the Gezi Park Protests. This twenty-year span of progress and opening, however, masks a far deeper and more complex history of LGBTI people in Turkey. Although homosexuality has been legal since 1858, LGBTI identities are still deeply socially unacceptable in wide swathes of Turkish society. Istanbul Pride was banned in 2016, and a wider ban on public LGBTI-themed events in Istanbul, Ankara, Mardin, and a host of other cities was introduced the following year. The histories of queer identities in Turkey are rich, but legislative and social pressures have often kept them under the surface.

Over the past two years, the British Library has sought to build up its own small archive of the LGBTI presence in Turkey. Through purchases and donations from a variety of organisations across the country, the collection has grown steadily. In 2017, I wrote about our small holdings of queer-themed items from across the region. Since then, fiction and non-fiction items have poured in, enriching the resources we are now able to offer stakeholders visiting the Library. Many of these came to us from two national organisations: Pembe Hayat and Kaos GL. Both are based in Ankara, the country’s capital and seat of political power. Pembe Hayat is focused largely on the protection and advancement of rights and safe spaces for Turkey’s transgender and non-binary communities, while Kaos GL is an umbrella organisation advocating for people across the sexuality and gender spectra. 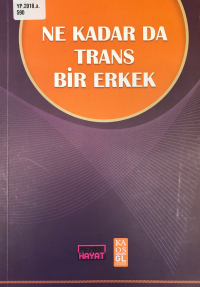 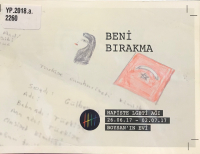 Among the items donated by the two organisations are a number of studies on the lives, rights, and social statuses of LGBT people in the country today. Pembe Hayat has done a considerable amount of work in collecting the stories of trans people living in various Turkish cities. By doing so, they hope to provide a more three-dimensional and complex view of their lives against a backdrop of persistent discrimination and harassment, and to combat stereotypes within the popular imagination. Ne Kadar Da Trans* Bir Erkek (What a Trans* Man) collects the first-person accounts of trans men, allowing them to voice their hopes, dreams and experiences to readers in a compassionate and supportive environment. Similarly, a booklet of postcards featuring the artwork of trans prisoners creates a touching, emotional window onto the daily lives of incarcerated trans men and women. The artwork was originally exhibited at Boysan’ın Evi in Istanbul in the summer of 2017 in a show organised by Ceza İnfaz Sisteminde Sivil Toplum Derneği (CİSST; Civil Society in the Penal System Association), Pembe Hayat, KADAV (Women’s Solidarity Foundation) and Metin Akdemir. Published by Hapiste LGBTİ Ağı (LGBTI Network in Prison) and donated by Pembe Hayat, the collection is entitled Beni Bırakma ( Don’t Leave Me) – a haunting reminder of the social isolation and alienation suffered by many people expressing LGBTI identities. Thanks to Hapiste LGBTİ Ağı and CİSST, the stories of queer prisoners have an outlet in publications such as Beni Bırakma and the Network’s series of reports on prison conditions for LGBTI inmates. 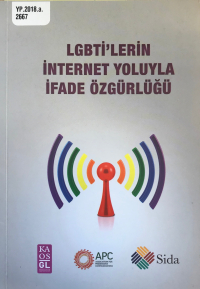 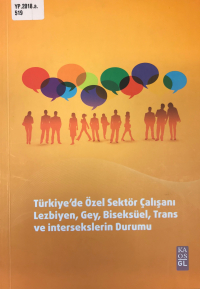 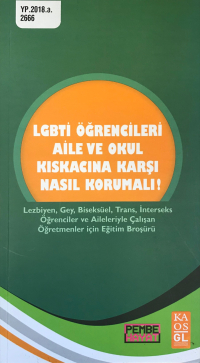 On a more general note, donations from Kaos GL have helped to increase our collection of work devoted to uncovering those aspects of hate speech and homo- and transphobia often missed out in official statistics. These include a report on homophobic and transphobic crimes committed in Turkey in 2015; a booklet on LGBTI freedom of speech on the internet; one on the state LGBTI people in private workplaces, and, importantly, a guide to parents and teachers on how to address homophobia in schools. For those researchers seeking to understand the social status of sexual and gender minorities in the country, and the similarities and differences in legal structure and protections across states, these and other materials in our collections are essential sources of study and analysis. 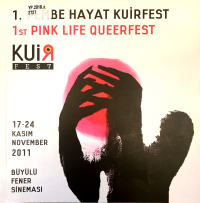 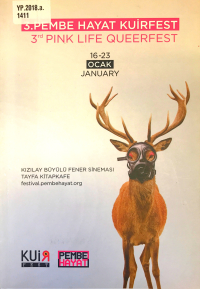 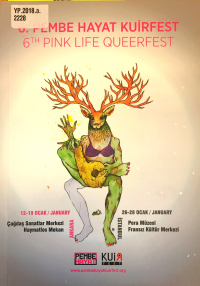 LGBTI existence, however, is not simply a chain of discrimination and struggle, a grey sky without rainbows. Luckily, the Turkish LGBTI collections at the British Library also document moments of celebration and community that reach beyond the confines of common stereotypes. Among the most prominent of these is the LGBTI film festival Kuirfest, organized by Pembe Hayat and hosted in Istanbul on an annual basis since November 2011. The festival features the best of LGBTI cinema from Turkey and around the world, helping to showcase Turkish talent, change public perceptions of queer people, and connect the local community to LGBTI communities and allies around the world. The Library is fortunate to hold a near-complete collection of the festival guides from 2011 until 2017, documenting the development and growth of the event over time. While our collections tilt heavily towards official reports and accounts, we hope to add more material of this nature over the coming years, as a means of providing a more balanced and deeper perspective on everyday life for queer people across the Turkish Republic. 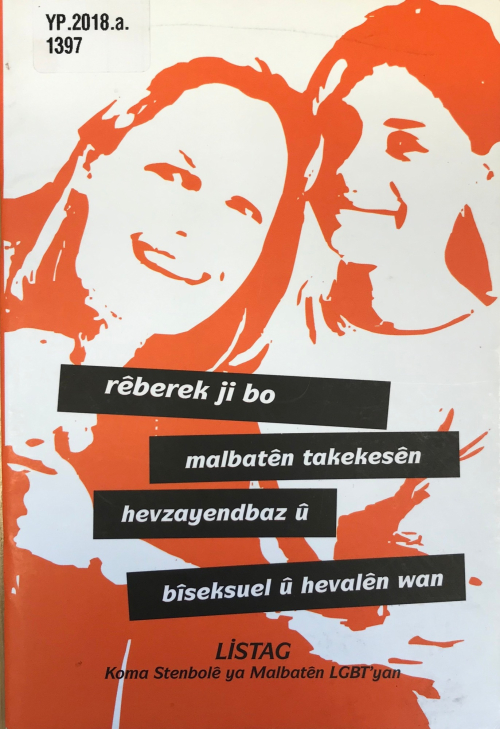 Diversity in Turkey is not just an issue of sexuality and gender. It also reflects the country’s rich tapestry of ethnic and religious groups. Many LGBTI people also belong to linguistic or religious minorities, chief among them the Kurds, Alevis, Armenians, Greeks and Jews. These people, who grapple with the intersectionality of their sexual or gender identities and those of their linguistic, ethnic or religious backgrounds, seek to have all aspects of their make-up recognized as integral parts of their personal experience. Publications by groups that support ethnic- or religious-minority queer people in Turkey are rare, but we have managed to acquire a few. These include translations of materials about LGBTI issues into Kurmanji, the Kurdish language most widely spoken in Turkey. Rêberek ji bo malbatên takekesên hevzayendbaz û biseksual û hevalên wan (A Guide for the Families of Homosexual and Bisexual Individuals and their Friends) is a small pamphlet aimed at assisting the families of LGBTI people during the often-painful experience of coming out. Translated and distributed by LİSTAG it demonstrates the small but growing awareness of the need to address the city’s – and the country’s – Kurdish and Zaza queer communities in their own languages. This work is being carried out by individual groups, such as Hêvî LGBTİ in Istanbul, as well as those working within Pembe Hayat and Kaos GL, which maintains a separate webpage in Kurdish. 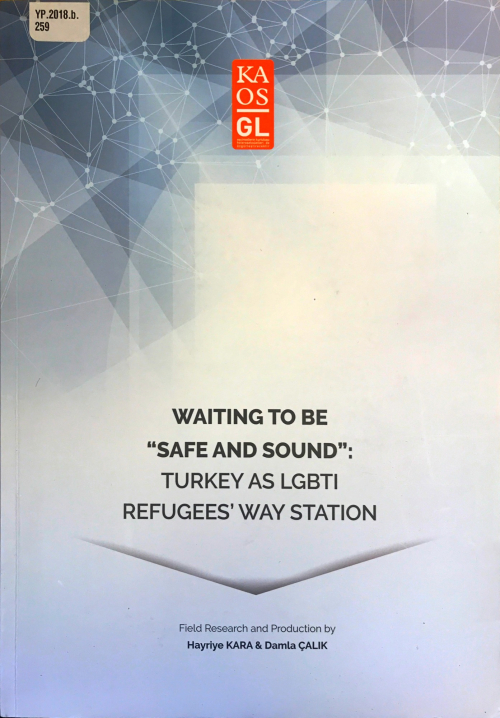 The stories and experiences of Syrian and Iranian LGBTI refugees residing in Turkey. Kaos GL, Waiting to be "Safe and Sound". Ankara, 2016 (BL YP.2018.b.259)

Finally, I’d be remiss if I failed to mention the growing, but often overlooked, community of queer people who have now found refuge inside Turkey. As one of the few countries in the region that does not criminalise homosexuality, Turkey has often hosted those seeking sanctuary from sexuality- and gender-based persecution in their homelands. This trend has been exacerbated by the 8-year civil war in neighbouring Syria, and today many cities host large groups of queer Syrian and Iranian refugees. Turkish LGBTI advocacy groups have sought to work with such people, helping them to navigate bureaucratic systems, deal with the trauma of persecution and flight, and protect themselves in environments not always conducive to sexual and gender diversity. Activists have also sought to collect their stories, to make known the ordeal through which these people have lived, and their hopes and dreams for the future. In 2016, Hayriye Kara and Damla Çalık pulled together such accounts and published them in a small volume entitled Waiting to be “Safe and Sound”. We are fortunate to have it as part of our collections, another part of the rich quilt of queer culture in Turkey.

The representation of diversity is an essential, although not always easy, aspect of building collections at the British Library. This LGBT History Month, we celebrate the steps we have taken to ensure the inclusion of works by and about queer people in some of our non-English collections. Acquisition, however, is only half the battle. Visibility and accessibility are just as important: there’s no point in having something if it can’t be seen and explored by readers from all walks of life. For the Turkish collections, I’ve sought to provide as many access points to these items as possible within the catalogue. But I also recognize that, sometimes, cataloguing can be counterintuitive. That’s why I continue to seek engagement with the community about how to make our collections more discoverable and accessible, regardless of a visitor’s familiarity with the Library’s systems. If you’re interested in learning more about this, and about how to make use of these collections, consider coming out to the Methods in Question: Epistemologies of Gender and Sexuality seminar at Cambridge University on February 28. I’ll be presenting on these LGBTI collections and helping interested users understand how they can make best use of the British Library’s holdings on topics of sexuality and gender in Turkey and the broader Middle East.

Michael Erdman, Curator of Turkish and Turkic Collections at the British Library

[1] The “I” on the end of LGBT stands for Intersex people, who might account for between 0.7% and 1.7% of the general population.

Posted by Ursula Sims-Williams at 12:04 PM