Musicians and Dancers in the India Office Records

This guest post by Katherine Butler Schofield houses the illustrations for the podcast “A Bloody Difficult Woman: Mayalee Dancing Girl vs. The East India Company” produced by Chris Elcombe. It was part of a series of presentations at the British Library in 2018 for Katherine’s British Academy Mid-Career Fellowship programme “Histories of the Ephemeral: Writing on Music in Late Mughal India.” Special thanks to the Fitzwilliam Museum, Cambridge, for permission to reproduce the detail below from MS 380 of the courtesans’ kite dance. 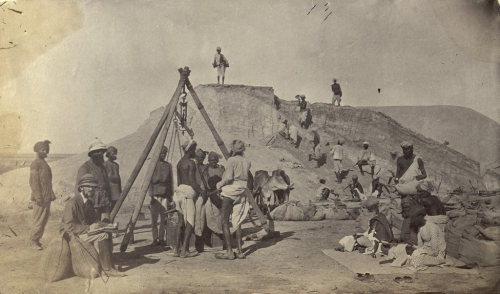 I was going through the East India Company’s Foreign Department Proceedings Index, Volume 1840–49 K–Z, in the National Archives of India, when I first found her: “Pension to Meyalee[1], dancing-girl, from Jeypore share of Sambhur lake funds.” It was my first foray into the official records of British colonial rule in India, and I was there to see if I could find any trace of the Indian singers and dancers that we know, from paintings and travel writings of the time, filled the long nights and dreams of many an East India Company man in the early decades of the nineteenth century. So far I’d had little luck. And yet here she was—Mayalee Dancing Girl. But not just Mayalee: a whole set of musicians, dancers and other performers named as “pensioners” of the salt revenues of Sambhar lake in eastern Rajasthan. 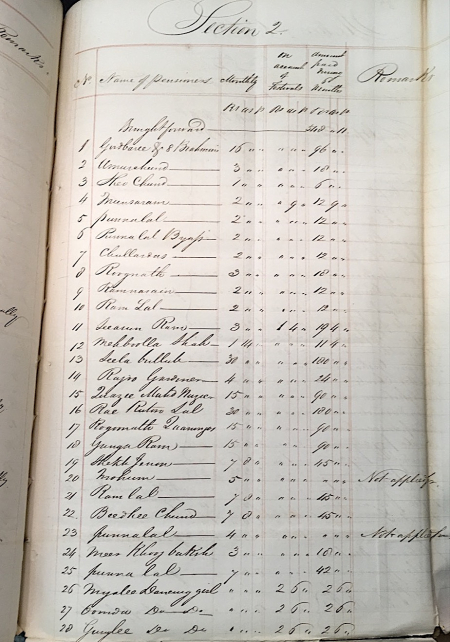 “Statement of pensions and endowments paid from Sambhur Treasury on account of the Jyepoor State from 1 January to 30 June 1839.” Section 2: cash payments monthly and on account of festivals (IOR Board of Control General Records, India Political Department, October 1838–1840)

For a brief period between 1835 and 1842, the East India Company sequestered the revenue and salt factories of the Sambhar salt lake that rightfully belonged to the independent Rajput states of Jaipur and Jodhpur. In 1818, faced with the Company’s overwhelming military might, the major Rajput states signed a treaty in which the British offered them political and military “protection” in exchange for heavy cash tribute. By the early 1830s, Jaipur and Jodhpur were swimming in debt and refusing to cooperate with the British. So, from 1835 until 1842, the Company seized the lake at Sambhar, which is still one of India’s largest commercial sources of salt. The Sambhar lake accounts here in the British Library include long lists of institutions and individuals who had historical rights in the salt revenues of Sambhar, in salt as well as cash. And among the individual recipients of both cash and salt was a courtesan, or “dancing girl”, who was clearly more important than all the other performers at Sambhar. Her name was Mayalee.

What does Mayalee’s appearance in the Company’s official records tell us about interactions between the British colonial state and the Indians whose lives they were increasingly encroaching upon during the 1830s and 40s? In this blogpost, which accompanies my podcast on the Sambhar lake affair, I will look more generally at where musicians and dancers appear in the official records of the East India Company held in the India Office collections of the British Library, and in the National Archives of India.

Indian musicians and dancers appear in official colonial records only rarely, and when they do, what they have to tell us tends not to be about music. Instead, performers’ appearances in the official records open up unusual windows onto much wider concerns.

The British were able…to penetrate and control the upper level of networks of runners and newsletter writers with relative ease…yet they excluded themselves from affective and patrimonial knowledges …British understanding, revealingly, was weakest in regard to music and dance [etc.]…though such concerns are near the heart of any civilization.

Bayly’s statement is not necessarily true of individuals such as Sophia Plowden and her fellow-travellers. But it does seem to have been true of the official colonial state. In the 1830s and 40s, the cultural heartlands of North India’s elite musical traditions remained the Mughal court in Delhi and the autonomous princely states of Lucknow, Rajasthan, Gwalior, etc.—though we mustn’t forget there was thriving demand for these arts in the colonial port cities of Calcutta and Bombay, too. An overview of the indexes to the records of the Company’s dealings with the autonomous states c.1830–58 is telling[2]. It indicates that the colonial state was largely uninterested in performing artists; except when they were:

Criminal and civil cases in which performers faced Company judicial proceedings overwhelmingly seem to have concerned courtesans. This suggests just how wealthy and important courtesans like Mayalee were in the early nineteenth century, but also the general distrust with which they were viewed for their apparently mercenary motives, as well as their physical vulnerability. The British Library’s incomplete set of newsletters (akhbārāt) from Delhi c.1810–30 (Add. 24,038, Add. 23,148–9, Add. 22,624) tell us for example that, on 11 May 1830, the Resident of Delhi, Francis Hawkins (Pernau and Yunus Jaffrey, p.231):

went to the Shish Mahal [in the palace] and held the session of the appeal court. He heard the case of the Raja of Kishangarh and Rasiya, the tawai’f. [The Raja claimed Rs 18,000 from Rasiya and she refused to pay. He] said that he had given her Rs 1,000 and a shawl in advance and that she had no claim to further payment. 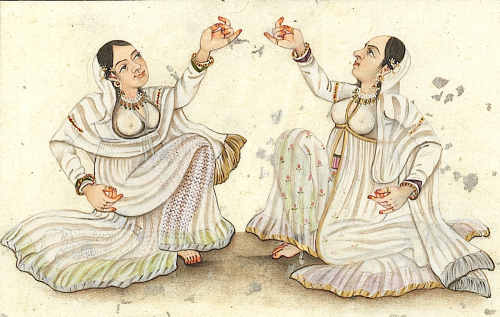 Numerous reports of highway robbery and even murder indicate how vulnerable tawā’ifs were to attack on the bandit-infested roads of Upper India. As itinerant professionals who moved from patron to patron carrying plentiful jewels and cash, they were clearly at risk even when they travelled together in large troupes[3].

Certain groups and individual performers became targets of Company suppression for their supposedly malignant interference in the political affairs of autonomous states. The Company’s most famous intervention was in Lucknow in 1848, when the Resident, Colonel Richmond, forced the last Nawab of Awadh, Wajid ‘Ali Shah, to stop appointing “Singers and other improper persons” to government positions, and made him send his notorious favourite, the sitār-player Ghulam Raza, into exile because of his “evil” influence[4]. But of particular relevance to Jodhpur and Jaipur in the 1830s was the Company’s attempt to destroy the power of the Rajput rulers’ customary bards and praise singers, the Bhatts and Charans, whom the British saw as “rapacious” “extortionists” with far too much sway over Rajput politics (see BL MSS Eur D814. Ludlow papers, c.1855). 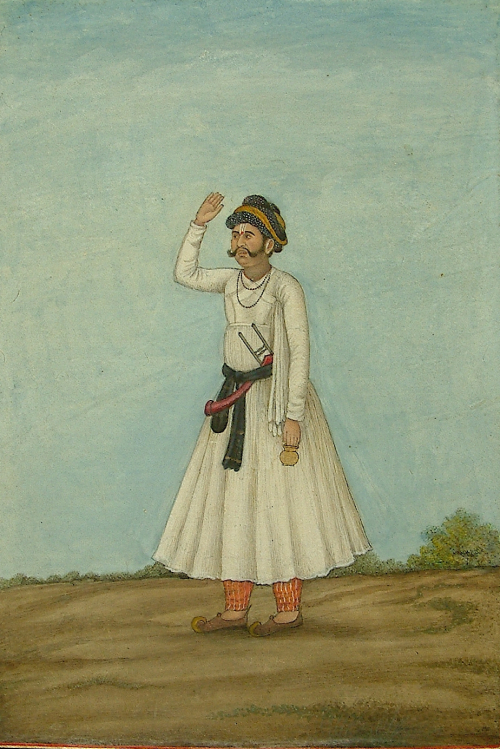 In this case, the British intended to take down these ritual specialists. Elsewhere, the loss of musicians’ livelihoods was probably unintended, though still devastating. What happened to the Nawab Nazim of Murshidabad’s department of entertainment in 1773 is salutary. Music departments existed as bureaucratic units of most princely states long before the British, e.g. the gunijān-khāna or “house of virtuosos” in Jaipur, and the arbāb-i nishāt or “department of entertainment” in Mughal Delhi, Murshidabad, and Hyderabad. They sometimes also appear in Company records as lines in the household accounts of recently deposed rulers, including those for the Nazim of Murshidabad (deposed 1765), which remained a major centre of Mughal musical culture until the 1770s. Besya. The accompanying description of the classes of courtesan includes the bhagtans of the Rajput courts (BL Add. 27,255, f. 137v)

In 1773, the British decided to slash the Nazim’s household expenditure. The young official placed in charge of this process sent a straitened budget back to Calcutta. All department budgets were slightly reduced—except one, which had a swingeing cut from 1393 rupees per annum to just 16: the budget of the “Arbab Neshat Musicians”[5]. With one pen stroke, a culturally illiterate accountant who considered music to be an unnecessary frippery for a deposed Nazim may have destroyed Murshidabad as a musical centre.

Musicians’ livelihoods were thus directly, and often harshly, affected by the Company’s interference, both intentional and unintentional, in older Indian modes of compensation for cultural labour. So what then of charitable grants and pensions: in cash, land, or things the British saw as valuable commodities, like salt? Company officials were clearly not at all averse to meddling in the customary and economic practices of autonomous states when they felt it was warranted, especially where their revenue maximisation was at stake. And as Roy Moxham has observed (The Great Hedge of India. Constable, 2001), where salt revenues were concerned, the Company was insatiably greedy.  But the appearance of Mayalee dancing girl and her colleagues within the salt-revenue records of the Sambhar lake affair—the subject of my next book—also reveals that the Company never had it all their own way.

Mayalee the dancing girl refused point blank to obey the British instruction to accept cash in lieu of the salt stipend that was her traditional due. And Jaipur and Jodhpur defied the Company in order to pay her in salt. To find out why—and what all this meant for Sambhar, Jaipur, Jodhpur, and the Company—you will have to listen to the podcast!

The images in this blogpost accompany the podcast and will help guide your imagination as I explore what the Company records inadvertently reveal about the lives and customs of all those who worked and ate the salt of Jaipur and Jodhpur, through the jarring misunderstandings and unintended consequences of East India Company interference in the operations of Sambhar salt lake. 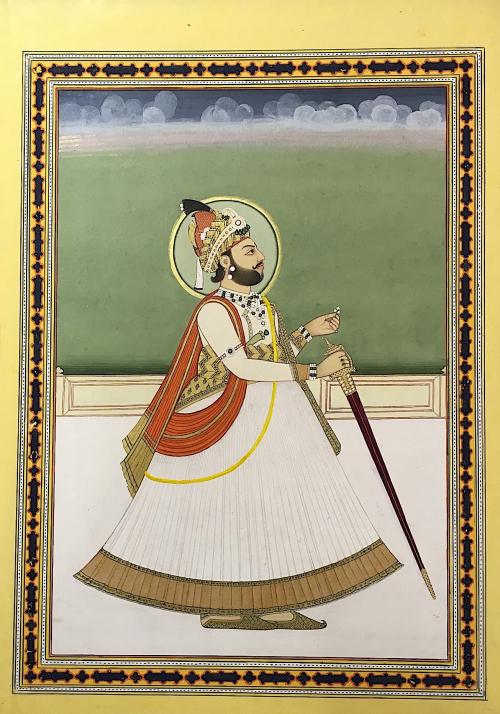 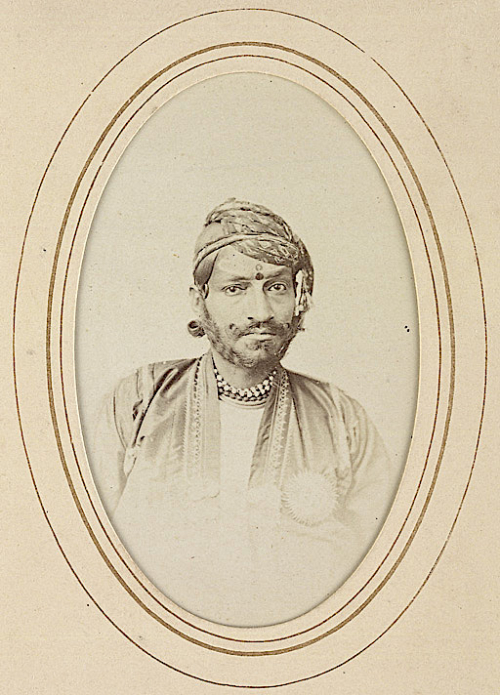 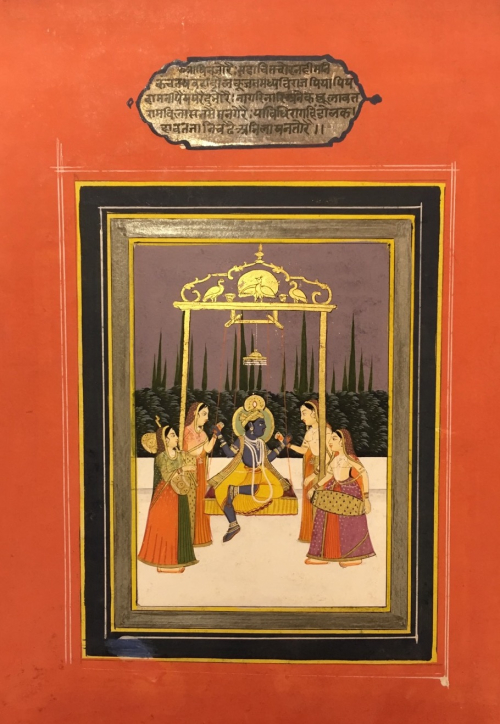 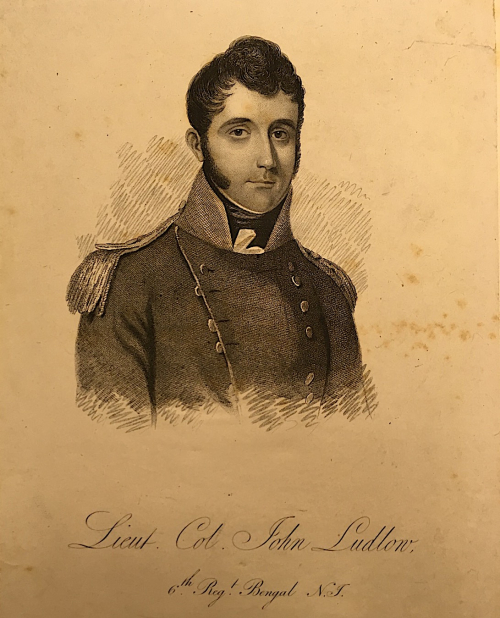 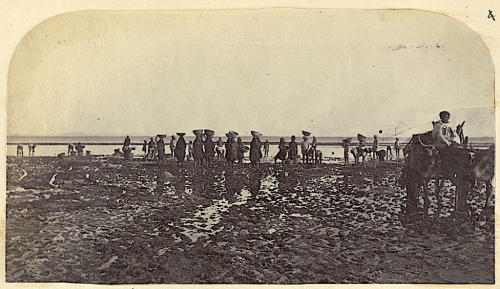 With full credits and thanks on the podcast website

[1] Her name is variously spelled Meyalee, Myalee and Mayalee in the accounts.
[2] The records of the East India Company’s dealings with the autonomous states are found in the Foreign Consultations and Proceedings in the National Archives of India, and the General Correspondence [E] and Board of Control General Records [F] files of the India Office records at the British Library.
[3] Tr. Margrit Pernau and Yunus Jaffrey, Information and the Public Sphere (OUP, 2009), pp. 69, 165, 231, 253–4.
[4] National Archives of India, Foreign Political Consultations (NAI FCP) 8 Jul 1848.
[5] NAI FCP 25 Jan 1773.

Posted by Ursula Sims-Williams at 7:26 PM