A Jesuit Atlas of Asia in Eighteenth-Century China

Today's post is by guest blogger Xue Zhang, PhD candidate, Department of East Asian Studies, Princeton University. Xue Zhang is working on Qing China’s geographical knowledge of Xinjiang in the eighteenth and nineteenth centuries with a special interest in cartography. Here she writes about an important discovery in the British Library India Office Records Map collection

In 1735, Jean-Baptiste Du Halde (1674–1743) thrilled European readers with the news that the Jesuits had made impressive progress in China. His colleagues used a map of Peking to impress the Kangxi emperor (r. 1661-1772) with the accuracy of the European methods and successfully persuaded him to commission the Jesuits to complete a national map of which was to be of vast importance to the empire. In the eighteenth century, a considerable number of Jesuit cartographers worked for the Qing court, and their most important works included the three atlases they presented to the Kangxi, Yongzheng (r. 1722-1735), and Qianlong (r. 1735-1796) emperors. 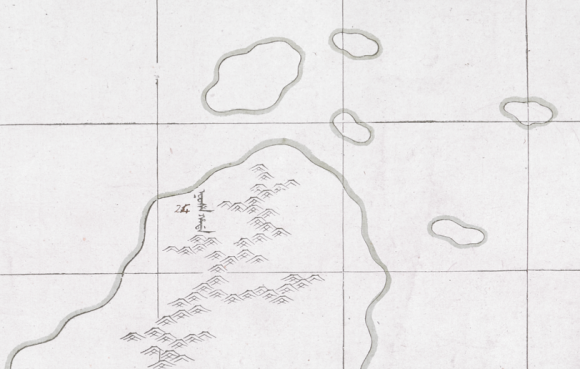 The Jesuit atlas (IOR/X/3265) initially catalogued by the British Library as “Chinese roll maps” is a revision of the Yongzheng Atlas (henceforth the BL edition). A Catalogue of Manuscript and Printed Reports, Field Books, Memoirs, Maps, etc. of the Indian Surveys Deposited in the Map Room of the India Office refers to it as “A Chinese map of the greater part of Asia and part of European Russia,” and includes a detailed entry. As with the Kangxi and Qianlong Atlases, the scope of the Yongzheng Atlas reaches beyond the territories under Qing rule. The northernmost toponym of the BL edition is Noosy Hada off the Russian coast of the Arctic Ocean, and the southmost toponym is the Great Tortoise Shell Shoal ( Da daimao zhou) at the tip of today’s Hainan Island. The atlas extends west to the Red Sea, and east to Gioi Ri li Omo in Russia. Therefore, it is more accurate to regard it as a map of Asia than of the Qing empire. 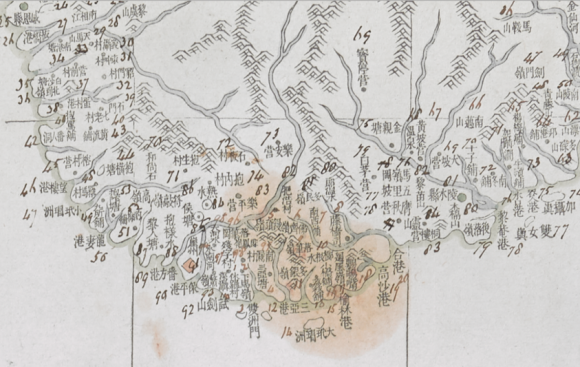 In 1708-1718, under the patronage of the Kangxi emperor, the Jesuits conducted comprehensive surveys of Qing territories, measuring the longitudes and latitudes of 641 sites. Synthesizing their own data and other sources, the Jesuits produced the Kangxi Atlas. In 1756, 1759, and 1772, the Qianlong emperor, Kangxi’s grandson, had the Jesuits map Xinjiang, the former territory of the Zunghars that the Qing had newly acquired. The earliest edition of the Yongzheng Atlas was completed no later than 1726, while the BL edition reflects the territorial changes up through 1760. For most Qing territories, the BL edition consults the results of the land surveys conducted in 1708-1718, 1756, and 1759. For a few borderlands, such as Tibet, and the areas beyond Qing control, the Jesuit cartographers referred to Qing envoys’ records and other materials. 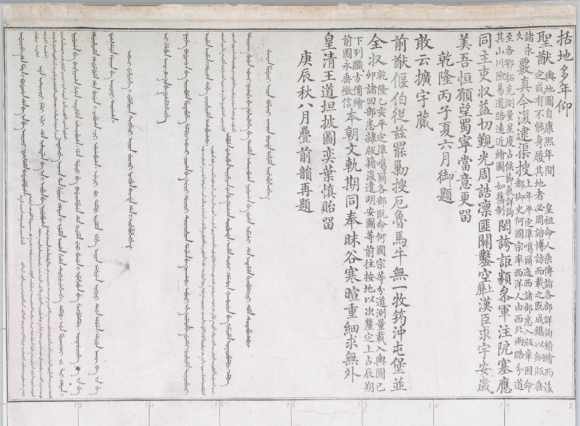 The BL edition of the Yongzheng Atlas is prefaced by two Qianlong’s poems in Chinese and Manchu, which are dated 1756 and 1760. The same poems preface the Qianlong Atlas (BL IOR/X/3265)

The Yongzheng Atlas is characterized by its hybrid style, which distinguishes it from the Kangxi and Qianlong Atlases, which use latitude-longitude coordinates. The BL edition is composed of ten rows of various lengths, and each row is divided into squares of 2.5 inches, by equidistant horizontal and vertical lines. The vertical lines represent meridians with indicators, such as “east one” and “west one,” on the bottom. The prime meridian is based at the Shuntian prefecture, the capital area of the empire. The horizontal lines resemble latitudes but do not note any degree. The coordinates of the Yongzheng Atlas are a hybrid of the latitude-longitude system and the conventional Chinese method of indicating the distance by a network of square grids. The Kangxi and Qianlong Atlases adopt curves, and thus are known as “curved-grid maps” (xiege ditu) in the Qing documents, while the Yongzheng Atlas, featuring straight lines, is referred to as a “rectangular-grid map” (fangge ditu). 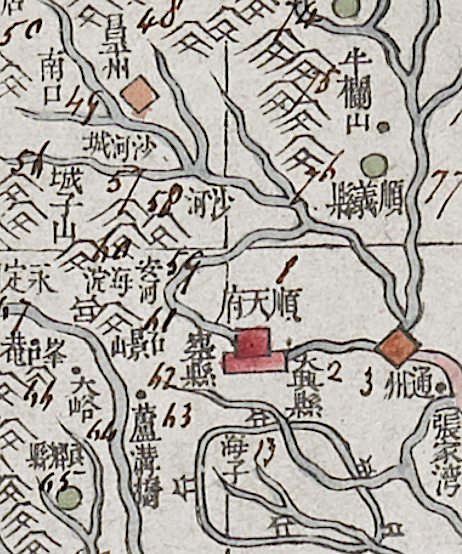 The meridian crosses the Shuntian prefecture (In red)

Imperial cartographers updated the Yongzheng Atlas throughout the eighteenth century to make sure that it reflected the latest territorial changes and cartographical practices, and thus left multiple versions. The currently known nine editions of the Yongzheng Atlas are preserved in five institutions. The xylographic edition in the Chinese Academy of Sciences was printed no later than 1728. The xylographic print and manuscript in the First Historical Archives can be dated to 1729. The two colored xylographic editions in the Palace Museum in Beijing were printed respectively around 1725 and 1729. One manuscript edition in the museum was drawn before 1727, while the other was after 1730. The editions in the National Library of China and the British Library were produced between 1759 and 1761.

In 1825, John Reeves (1774-1865), a British tea merchant in Canton, presented the BL edition of the Yongzheng Atlas to the library of the East India Company in London. During his stay in Canton from 1812 to 1831, Reeves acquired an extensive collection of the specimens and drawings of exotic flora and fauna and his collection ended up in the British Museum’s natural history department. William Huttmann’s report to the Council of the Royal Geographical Society in 1844 briefly described the BL edition. Nevertheless, he mistook the revision of the Yongzheng Atlas for the Qianlong Atlas, which also included depictions of Inner Asian territories gained by the Qing in the 1750. Huttmann claimed that he had translated all the Manchu toponyms and a considerable portion of the Chinese ones in this atlas on behalf of the East India Company. 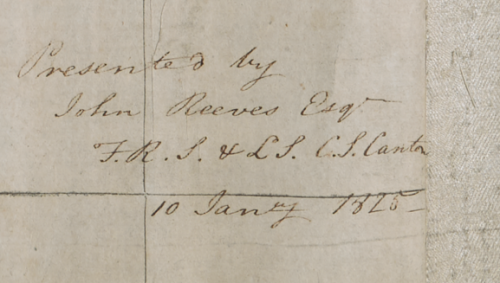 The marginalia in the lower left corner of the third row.

In his magnum opus Science and Civilisation in China, Joseph Needham argued that the Chinese grid tradition was another form of quantitative cartography, which continued to prosper when the European tradition of quantitative mapmaking suffered a great degeneration in the medieval millennium. The Yongzheng Atlas integrates two traditions, pioneering a series of nineteenth-century maps, in which the Chinese rectangular grid system and the latitude-longitude coordinates coexisted.

A Catalogue of Manuscript and Printed Reports, Field Books, Memoirs, Maps, etc. of the Indian Surveys Deposited in the Map Room of the India Office. London: W. H. Allen & Co, 1878.

Millward, James. “Coming onto the Map: ‘Western Regions’ Geography and Cartographic Nomenclature in the Making of Chinese Empire in Xinjiang.” Late Imperial China 20 (1999): 61-98.

Needham, Joseph. Mathematics and the Sciences of the Heavens and Earth, vol. 3 of Science and Civilisation in China. Cambridge: Cambridge University Press, 1959.