Over 30,000 digital images of Javanese manuscripts from Yogyakarta are now fully accessible online through the British Library's Digitised Manuscripts website. The project, generously supported by Mr S P Lohia, has digitised 75 Javanese manuscripts held in the British Library from the collections of John Crawfurd and Colin Mackenzie, who both served in Java under Thomas Stamford Raffles, Lieutenant-Governor from 1811 to 1816. The manuscripts had been identified by historians Peter Carey and Merle Ricklefs as having been taken from the Kraton (palace) of Yogyakarta following a British attack in June 1812, when Crawfurd was Resident of Yogyakarta and Mackenzie was Chief Engineer of the British army in Java. 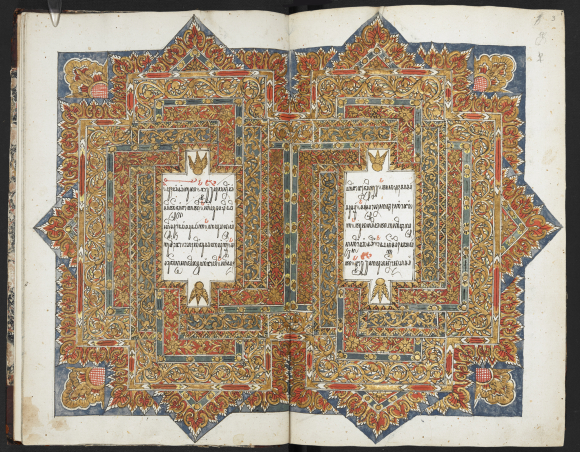 The completion of the digitisation project was celebrated with an impressive ceremony at the Kraton of Yogyakarta on 7 March, on the occasion of the 30th anniversary of the accession to the throne of Sultan Hamengku Buwono X. The British Ambassador to Indonesia, Moazzam Malik, presented complete sets of digital images of the 75 manuscripts to Sri Sultan Hamengku Buwono X, and also to the head of the National Library of Indonesia Mohd. Syarif Bando, and the head of the Libraries and Archives Service of Yogyakarta, Monika Nur Lastiyani. The digitised manuscripts will eventually also be accessible through the Kraton Jogja website. 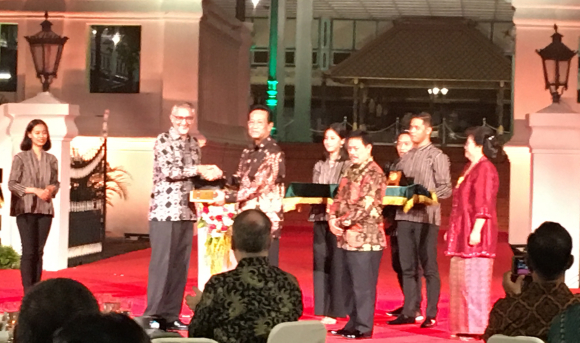 The celebrations also included a two-day International Symposium on Javanese Studies and Manuscripts of Keraton Yogyakarta from 5-6 March 2019, organised by Gusti Kanjeng Ratu Hayu, the fourth daughter of Sri Sultan.  Princess Hayu is an IT specialist, and this was evident in the impressive digital presentation and styling of the Symposium, with the electronic submission of audience questions via an app. 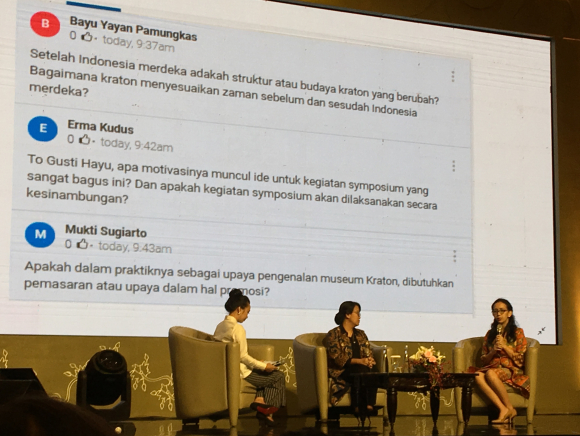 In her opening speech to the Symposium, Princess Hayu noted that even after the calamity of June 1812 - remembered in Yogyakarta as Geger Sepehi, the attack of the Sepoys, after the Indian troops commanded by the British - the Kraton had never ceased to be a centre for the production and reproduction of knowledge. Nevertheless, with the loss of the royal library there had been a definite break in the chain of transmission of knowledge (ada mata rantai yang terputus).

Responding to Princess Hayu's call for the recovery of the 'missing links' of traditional learning from the manuscripts, four of the 16 papers presented at the Symposium were based on newly-digitised manuscripts from the British Library. Ghis Nggar Dwiatmojo of Universitas Negeri Yogyakarta delved into a royal Yogyakarta primbon (divination) manuscript (Add. 12311) on palintangan (astrology), palindhon (earthquakes) and pakedutan (portentous tingling of the nerve-ends), looking specifically at predictions linked to earthquakes and eclipses. This paper was paired with Ahmad Arif's presentation, collating similar fruits of local wisdom born of collective memories of natural disasters from throughout the Indonesian archipelago.  Rudy Wiratama (shown below) of Universitas Gadjah Mada (UGM) found evidence in two manuscripts from the Mackenzie collection, MSS Jav 44 and MSS Jav 62, for the popularity of wayang gedhog - shadow-puppet plays based on the cycle of tales about Prince Panji - at the court of Yogyakarta before 1812. Stefanus K. Setiawan, also from UGM, had completely transliterated the beautiful copy of Jaya Lengkara Wulang pictured above (MSS Jav 24) for his undergraduate dissertatation, and was continuing his study of this manuscript for his masters degree; while Hazmirullah, from Universitas Padjajaran, Bandung, discussed a Malay version of judicial regulations issued by Raffles in Java (MSS Eur D742/1, ff. 155-166). 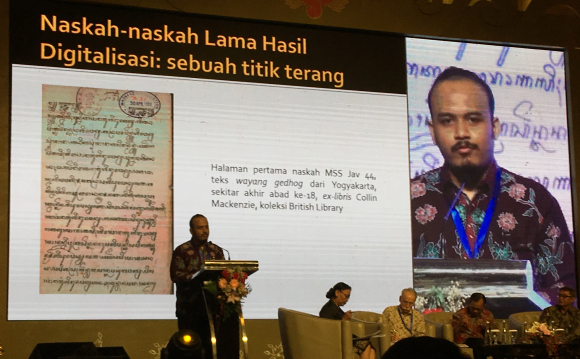 Rudy Wiratama of UGM showing the digitised wayang gedhog manuscript MSS Jav 44 used in his research on wayang performance at the court of Yogyakarta in the late 18th century.

The manuscripts were not only subjects of academic research, but also bore fruit in performance. The Symposium was opened with the Beksan Jebeng, a dance involving a shield-bow, while the ceremony at the Kraton on 7 March was heralded by an impressive performance of the Beksan Lawung Ageng, a martial dance accompanied by the venerable 18th-century gamelan Kiai Kanjeng Guntursari. As explained by Princess Hayu’s husband Prince Notonegoro to Ambassador Malik, both dances - creations of the first sultan of Yogyakarta, Hamengku Buwana I (r.1756-1804) - were being staged in their original form for the first time in two centuries, on the basis of information only now reaccessble through the digitised manuscripts. 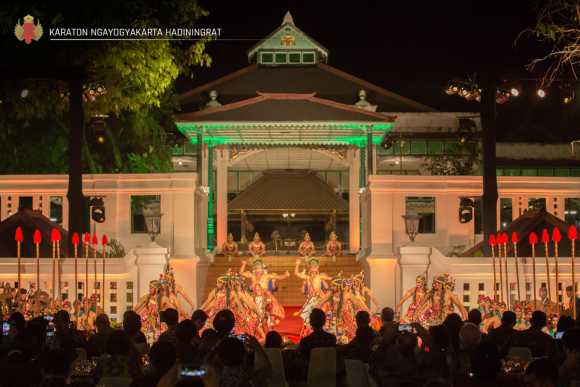 Performance of Beksan Lawung Ageng at the palace of Yogyakarta, 7 March 2019 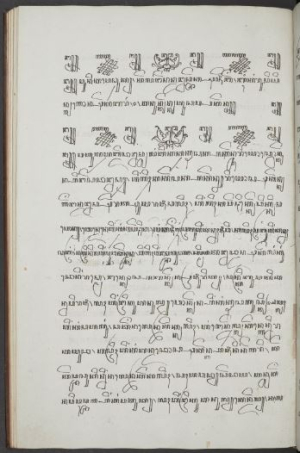 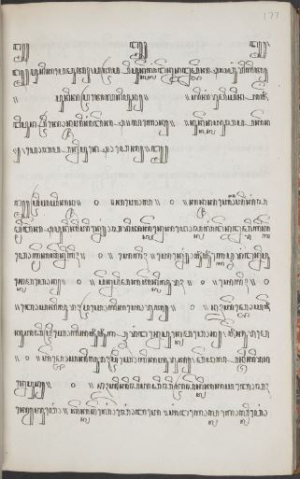 The evening also celebrated the opening of an exhibition at the Kraton of manuscripts from Yogyakarta collections, curated by Fajar Wijanarko of the Sonobudoyo Museum. Fajar noted that the earliest dated manuscript copied after 1812 now found in the Kraton library is the beautifully illuminated first volume of the Babad Ngayogyakarta, written in 1817. 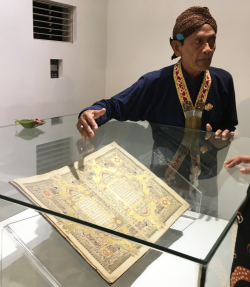 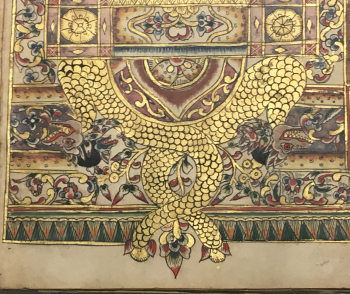 (Left) royal librarian Romo Rinto showing a visitor to the Kraton exhibition a manuscript of Babad Ngoyogyakarta, covering the reigns of Hamengku Buwono III to Hamengku Buwono IV, dated 1854, with (right) a detail of the fine illumination. Widyo Budoyo, W84/A22

Back in London, alongside events marking Indonesia's role as Market Focus Country at the London Book Fair (12-14 March 2019), a small display of the Javanese manuscripts from Yogyakarta was launched in the Treasures exhibition gallery in the British Library. At a talk at the British Library on 12 March entitled Beauty and History: Javanese manuscripts from Yogyakarta, I was joined by maestro Ki Sujarwo Joko Prehatin, who brought the manuscripts to life in song (macapat). Javanese literature is traditionally written in verse, according to set metres, and was designed to be sung aloud to an audience.  To listen to mas Jarwo singing from the Babad bedhah ing Ngayogyakarta by Pangeran Arya Panular, describing the British attack on Yogyakarta (Add 12330, f. 43v), click here (with thanks to Mariska Adamson for this recording). 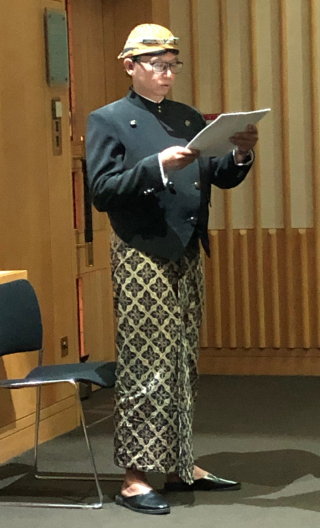 After the British attack on the Kraton of Yogyakarta in 1812, only three manuscripts were left in the royal library: a copy of the Qur'an copied in 1797, a manuscript of Serat Suryaraja written in 1774, and a copy of Arjunwiwaha dated 1778 (Carey 1980: 13 n. 11). During the course of the 19th and early 20th centuries, the palace scriptorium was kept busy with the creation of new literary works as well as the re-copying of classics, and a recent catalogue lists 700 manuscripts now held in the Widyo Budoyo and Krido Mardowo royal libraries (Lindsay, Soetanto & Feinstein 1994: xi-xii). Following the presentation of the digital copies of the Yogyakarta manuscripts from the British Library, Princess Bendoro informed me that Sri Sultan Hamengku Buwono X has decided that rather than printing out paper copies from the digital files, all 75 manuscripts will be recopied again by hand in the Kraton, in a continuation of the centuries-old tradition of inscribing knowledge in the courts of Java.

Posted by Annabel Gallop at 5:33 PM