Why are these Haggadah manuscripts different from all other Hebrew manuscripts?
On all other nights we avoid spilling wine in our books,
But on this particular night, it is unavoidable. 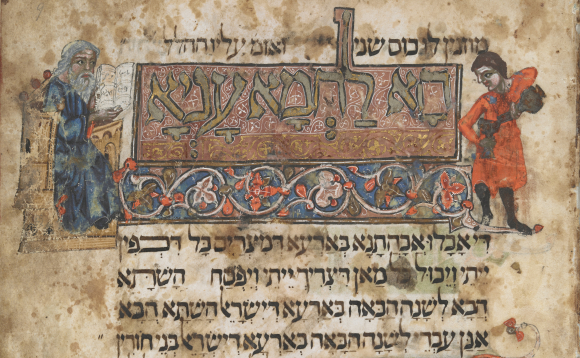 This year the Jewish festival of Passover starts on 19th April. Two years ago we talked about cleaning the house before Passover as illustrated in some of the British Library’s Haggadot, and this year we want to talk about “making a mess” at the Seder table.

Traditionally, on the eve of Passover Jewish families gather together for one or two nights for a special ritual meal called the Seder meaning ‘order’. The Haggadah is a service book which gives 15 steps to celebrate the Israelites' deliverance from Egyptian enslavement as described in the Book of Exodus.

The Haggadah text was originally part of the Hebrew daily prayer book, becoming an independent unit around the 13th century. Its oldest extant version can be found in the prayer book of Saadiah Gaon from the tenth century, and its earliest copy as a separate book dates from the turn of the thirteenth century, the so-called Birds’ Head Haggadah (Jerusalem, Israel Museum Ms. 180/57), which is also the first extant Haggadah in a separate volume to be illustrated. By the fourteenth century, the custom of illuminating the manuscripts of the Haggadah became widespread both in Sephardi as well as Ashkenazi lands.

The Haggadah is one of the most frequently decorated texts in Jewish practice, and the British Library’s Hebrew manuscript collection includes a range of beautifully illuminated Haggadot from around the 14th century.

The exquisite illuminations can be admired online and on display in the Treasures Gallery, but have you ever wondered about the stains in these invaluable manuscripts? Some of these codices were very expensive to produce, but, as these stains prove, their patrons apparently were not as vigilant as we are now about keeping them clean. Even nowadays, many Jewish families have stained books used every year at Passover. Why? 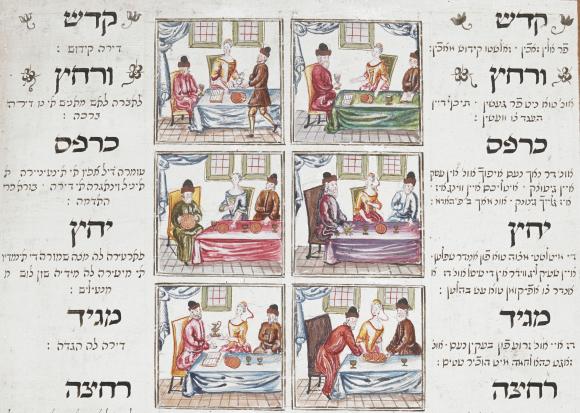 The first six steps of the Passover Seder. The participants are drinking wine and eating matzah, with books on the table. Leipnik Haggadah, Germany, 1740 (Sloane MS 3173, f.2r)

During the evenings of the Passover Seder, it is traditional to drink four cups of wine, and eat or gaze at different foods symbolising certain aspects of the enslavement of the Jews in Egypt and their Exodus. We will take you on a tour through all of the hazardous moments of the Seder, showing how stains and food crumbs become not only inevitable, but when practising the same ritual throughout generations, part of the tradition itself.

Imagine that you are seated at a table with an open Haggadah in front of you. And you pour some wine just like the men shown below in the fourteenth-century Hispano-Moresque Haggadah from Spain ... Wine is often considered a symbol of salvation in Jewish culture (and beyond). The four cups of wine one traditionally has to drink during the Seder are to celebrate Israel’s redemption from Egypt:

‘I am the Lord, I will free you from the labours of the Egyptians and deliver you from their bondage. I will redeem you with an outstretched arm and through extraordinary chastisements. And I will take you to be My people and I will be your God.’ (Ex. 6:6-7).

The four cups match the four verbs that describe how God delivered Israel from Egypt and will deliver Israel from exile at the End of Days: to free, to deliver, to redeem and to take. Of course, there are many more interpretations of the four cups, and the number four returns over and over and again during Seder.

The first cup of wine is used to make Kiddush, the blessing over wine (note the wine hazard!). 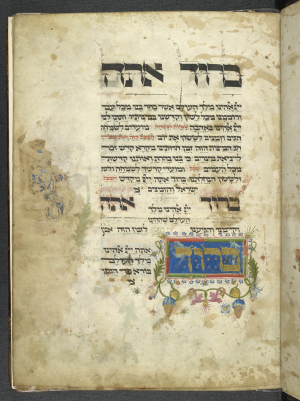 After the first cup of wine, you might wash your hands, and sit down to eat some parsley, or other vegetable (karpas) depending on your tradition, dipped in salty water. Isn’t it just natural to shake the parsley a bit after dipping (food hazard)? Then, the middle matzah (unleavened bread) of the three stacked on the table is broken in half, with one half hidden for later (crumb hazard). The Seder ritual then continues with the retelling of the story of the Exodus. Some communities also have a tradition of raising the Seder plate or matzah stack over their heads (food & crumb hazard). 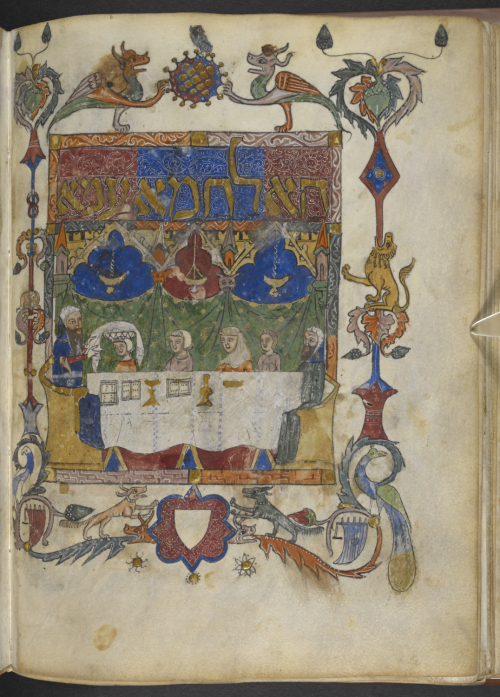 The Seder continues, going through the Haggadah with the retelling of the Exodus story. When listing the Ten Plagues of Egypt, each participant of the Seder removes a drop of wine from their glass with their finger (wine hazard). Then you raise your second cup of wine, and after the recitation of some Psalms (Psalms 113-114), it is customary to drink at least half of the glass each time, and the glass should be filled to the top (wine hazard). Two glasses of wine on an almost empty stomach! It is not surprising that the numbers of stains in the manuscripts increase as the Seder progresses. After this, the participants eat matzah (crumb hazard). Then maror (bitter herb). Then sticky haroset (fruit and nut paste - food hazard) on its own and in crumbly matzah sandwiches (crumb hazard). And you have to turn the pages with those sticky fingers… 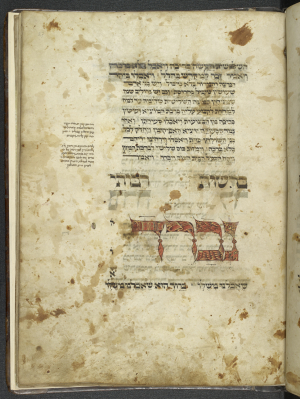 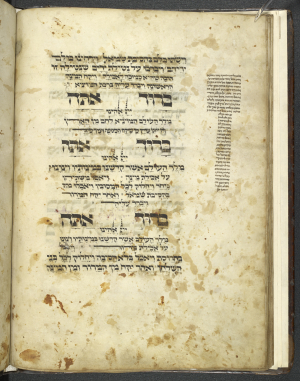 Blessings recited over the matzah and the maror at the beginning of the Seder meal. Ashkenazi Haggadah, Germany, 15th century (Add MS 14762, ff. 26v-27r)

After a ritual washing of the hands, a festive meal is served, followed by the previously hidden afikoman matzah (from the Greek epikomion meaning ’dessert’). After the banquet you have to have two more glasses of wine! The third cup after birkat ha-mazon, the grace after meal and the fourth cup after reciting some more Psalms (wine hazard). 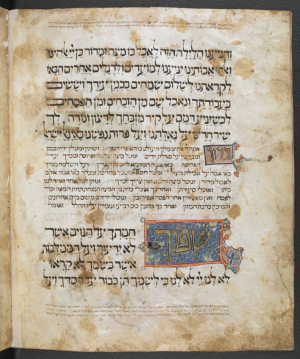 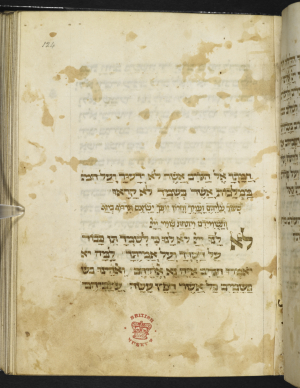 The fourth cup is poured before reciting Psalm 79:6 which begins with Shefokh ḥamatkha (Pour out your wrath). Left: the initial word is missing in a 14th-century Ashkenazi Siddur (Add MS 26954, f. 124r). Right: the Shefokh in the Brother Haggadah, (Or 1404 f. 19v)

Now you can see why it is dangerous to have food and drink around books, and why the British Library’s Reading Room policy is so strict.

Thanks to the Hebrew Manuscript Digitisation Project and BL Labs, you can download one of the illuminated Haggadot from data.bl, print them out and make your own wine stains!
Hag sameaḥ!