The 'Gilbert artist': a possible pupil of Sita Ram

When writing an essay recently on the artist Sita Ram for a forthcoming exhibition in the Wallace Collection in London of great artists of the ‘Company’ period, I started rethinking to what extent he influenced Kolkata artists and indeed artists of other Indian schools. There is of course his obvious influence on the beginnings of the ‘picturesque’ school in Delhi asociated with Ghulam ‘Ali Khan and his circle, but Sita Ram’s own picturesque style, the culmination of the Murshidabad style with its loose, expressive brushwork, seemed to have had no followers (for Sita Ram see Losty 2015); and Kolkata painting thereafter reverted to a harder style exemplified by Shaikh Muhammad Amir and his circle.  Yet there is one artist, little known, who perhaps did work with Sita Ram and followed in his footsteps in producing picturesque topographical drawings with occasional forays into portraiture and natural history painting. This was an as yet anonymous artist who worked for Lieutenant-Colonel Walter Raleigh Gilbert (1785-1853). 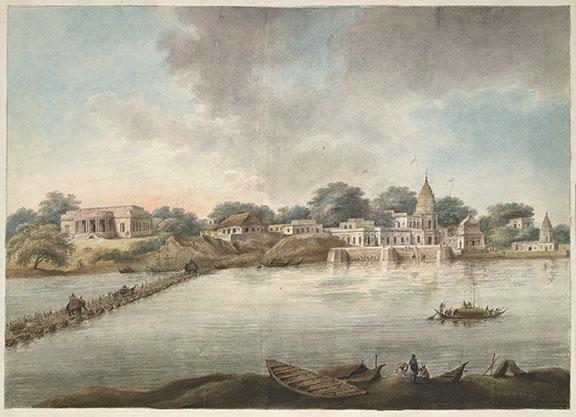 As Mildred Archer remarked in 1972, Gilbert and his wife Isabella belonged to a circle which was intensely interested in drawing and painting. Gilbert began his distinguished career in India with the 15th Bengal Native Infantry in 1801. From June 1812 to May 1813 he was A.D.C. to Sir George Nugent, the Commander-in-Chief, whose wife was an avid collector of paintings by Indian artists (see Add.Or.2593, Add.Or.2600, and the great volume of Agra architectural drawings, Stowe Or. 17).  On 1 June 1814 he married Isabella Ross, whose sister Eliza in the following year married Charles D’Oyly, the skilled amateur artist and later patron of Indian artists in Patna.  The sisters were cousins of Flora Hastings, wife of Lord Hastings, the Governor-General 1813-23, who were soon to embark on their long journey up-country, for which they employed Sita Ram to make a visual record of what they saw.  In 1814 Gilbert was barrack-master at Kanpur when Hastings and his party arrived in October. Indeed Sita Ram included, so the inscription tell us, a view of the Gilberts’ house above the River Ganga when depicting the newly erected bridge of boats to enable easier communication with the encampment of the new Nawab of Awadh, Ghazi al-Din Haidar, who had just arrived on the north bank of the river, which was part of Awadhi territory.

Gilbert and his wife then would certainly have been aware of Sita Ram and his place in the household of his wife’s cousin, and possibly even then they started commissioning their own paintings. Gilbert returned to Kolkata as Commandant of the Calcutta Native Militia, while Charles D’Oyly was the Collector there 1812-21. Besides owning a number of standard sets by Kolkata artists (still in private hands when examined by Mildred Archer), the Gilbert couple’s most interesting collection documented the next stage of their life when Gilbert was Commandant of the Ramgarh Battalion based on Hazaribagh (Jarkhand) from 1822 to 1828.  From 1825 to 1827, he was also Political Agent for the South West Frontier with head-quarters at Sambalpur (Odisha).  The BL has fifteen large drawings from this period, twelve acquired in the early 1960s (Add.Or.2514-25, see Archer 1972, no. 56), while three more were acquired privately by the Archers and entered the collection later (Add.Or.3949-3951). Seven other drawings from the set were acquired by the Victoria and Albert Museum (I.S. 10-1963 to I.S. 16-1963, see Archer 1992, no. 74).

The artist the Gilberts employed was trained in the Murshidabad style as practised at Kolkata, favouring the yellow and blue tonality often found in that style as opposed to the pink and brown favoured by Sita Ram. He must have been part of Sita Ram’s artistic circle in Kolkata and received the same sort of training in watercolour techniques. 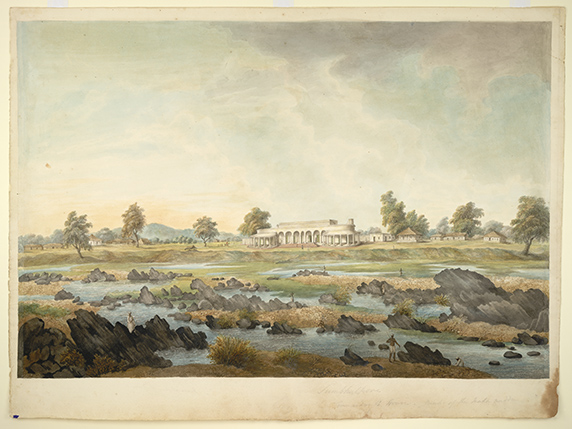 He had already mastered the picturesque style when he makes his first appearance and he uses the same techniques as Sita Ram, of soft, impressionistic brushwork and the tricks of aerial perspective. Unusually he sometimes employs a very low viewpoint showing off his grasp of recession, as in his view towards the Gilberts’ house in Sambalpur on the bank of the Mahanadi, and he uses the same viewpoint in his view of the fort at Sambalpur. 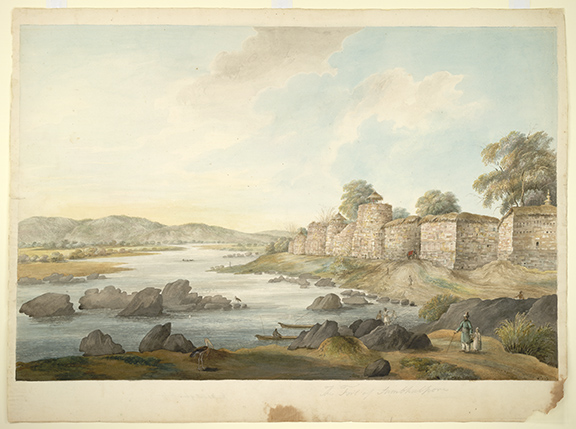 Here the artist is demonstrating his grasp of aerial perspective.  Little now seems to remain of the fort or the palace within it. The Rajas of Sambalpur, Chauhan Rajputs, had been dispossessed by the Marathas in 1797, but the captive Raja Jait Singh was restored by the British in 1817 (see O’Malley 1909 for details of this period in Sambalpur).  His young son Maharaj Sai succeeded in 1820.  The last Raja died without an heir in 1849 and the state lapsed to the government. 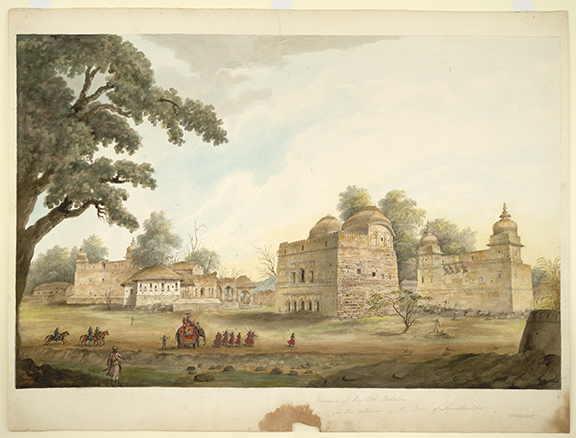 Again in his view of the palace in the fort he uses a typical picturesque device, making use of a tree on the left as a repoussoir to throw the foreground into shadow.  Our artist also follows in Sita Ram’s footsteps in occasionally including his patron in his paintings.  Thus in his view of the palace above, we see Gilbert on a caparisoned elephant approaching the palace for an audience with the young raja and his advisers. 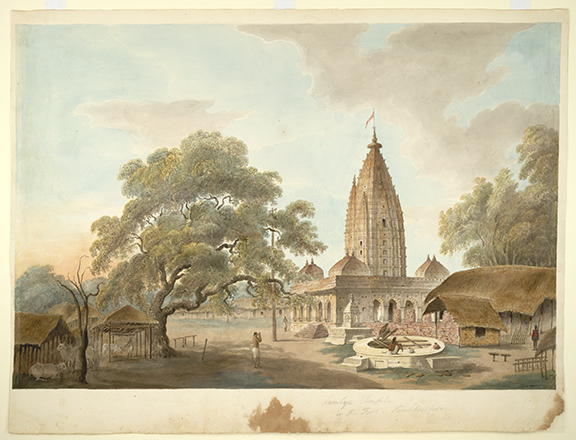 Sambalpur owes its name to Maa Samala or Samaleswari, a mother goddess of great sanctity in western Odisha and Chhatisgarh.   The temple has a square sanctum wherein the goddess resides and a vaulted arcade surrounding it for worshippers to perform pradakshina,features which are carefully depicted by our artist. Here he also includes features of village life – a cattle shelter, a little shrine with a worshipper, men working a well, and a sepoy of the Ramgarh Battalion standing guard outside a hut where other sepoys must have been stationed judging by the rifles stacked neatly outside. 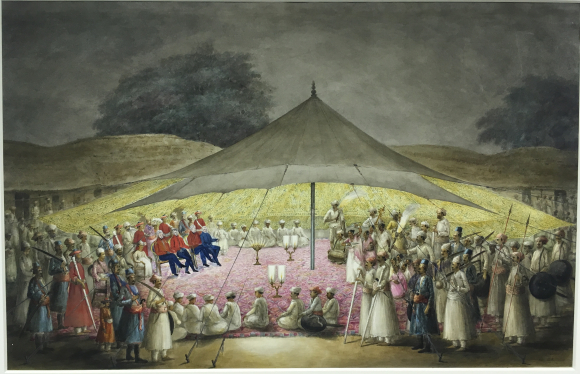 Gilbert and other British officers being entertained with a nautch by the Raja of Sambalpur. By the ‘Gilbert artist’, 1825-27. BL Add.Or.2522

Later in the series is a lively painting of Gilbert and his staff attending a nautch organised by the young Raja, who sits between his guests and his advisers all in European chairs. Our artist’s elongated figures like those of Sita Ram are derived of course from earlier Murshidabad painting, but in his familiarity with internal light sources in his paintings and in his treatment of the dark sky our artist comes close to Sita Ram’s work in his night scenes.

He follows Sita Ram again in his penchant for making great trees the subject of his pictures. A great banyan tree beside a river with villagers bathing, unfortunately uninscribed, dominates another of our paintings.  It recalls in its massive and dominating bulk with small figures scurrying around beneath it Charles D’Oyly’s contemporary painting of the Bodhi tree at Bodh Gaya (Losty 1995, fig. 16) and its associated drawings done in 1824/25.  D’Oyly and his wife passed through Hazaribagh, Gilbert’s permanent station at this time, early in 1823 on their way overland to Patna (sketches in the D’Oyly album BL WD2060, Archer 1969, pp. 163-68) and must have stayed with Lady D’Oyly’s cousin Isabella, since D’Oyly drew her bungalow there. The D’Oylys would have been back again at Christmas 1824 when several drawings of the Bodh Gaya temple and its great tree were added to the album.  All in all it is very likely that our artist saw D’Oyly’s work in this field and was influenced by it.  A second great banyan tree near Surguja (Chhatisgarh) is the subject of another of his pictures (BL Add.Or.2523, Archer 1972, pl. 31), but this is more in Sita Ram’s manner and is less overwhelming. Surguja was another of the small tributary states on the borders of Orissa, Jarkhand and Chhatisgarh – the view of the palace there is in the V&A (I.S. 15-1963). 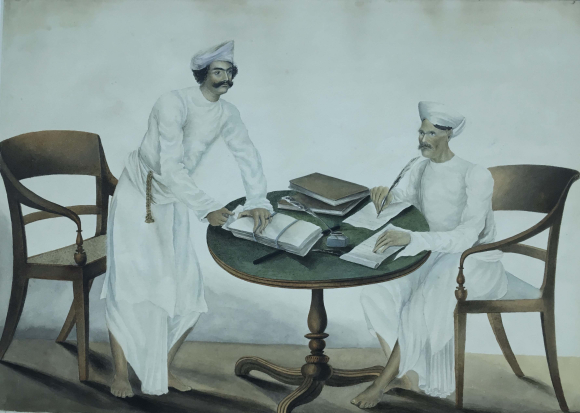 Occasional portraiture too comes within our artist’s purview, albeit less successfully, as in a double portrait of two men who appear to be his diwan and munshi, the men who looked after Gilbert’s official accounts and Persian language correspondence.  Another of his group portraits is of the Gilberts’ ayah and their table servants in red livery (BL Add.Or.2524, Archer 1972, pl. 31). 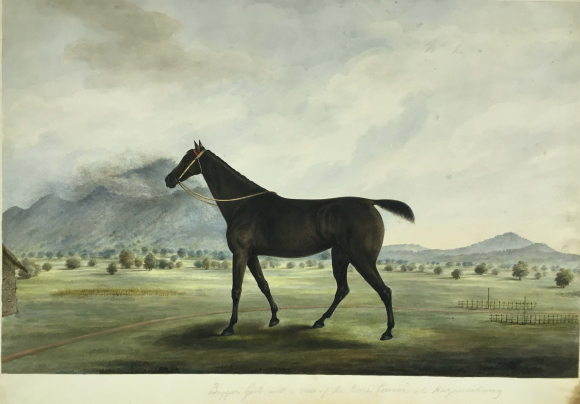 The natural world too could engage our artist’s attention, as in his depiction of Gilbert’s racehorse standing on the course at Hazaribagh. Like Sita Ram he is concerned with a naturalistic approach reproducing the animal’s volume and skin covering rather than anatomical details.  Gilbert was famous as a patron of the turf and could organise races anywhere he found himself posted.  It would seem certain that the walls of the Gilberts’ bungalows would have been covered with prints of famous racehorses posed against landscapes, by artists such as Stubbs and his successors, whose compositions Gilbert would have directed his artist to follow.  This is one of the earliest of the genre in Kolkata painting, and perhaps experimental, in that the right foreleg is wrongly positioned (the legs are often wrongly positioned in traditional Indian horse portraits too), a type that was later brought to perfection by Shaykh Muhammad Amir.

Also in the BL collections are two other drawings of his racehorses which were given to James William Macnabb, son of another Ross cousin Jean Macnabb, when Gilbert was Military Member of the Supreme Council in Kolkata in 1852-53 (BL Add.Or.4305-06). On leaving Hazaribagh in 1828, he took a long leave until 1844.  When he returned to duty he was stationed in the north-west at Agra and Ferozepur and took part in both Sikh wars.  Since both these portraits of horses were done by a Kolkata artist but set against a slightly hilly landscape, he must have taken this artist up-country with him after his return to India.  He does not seem to have been based in Kolkata again until 1852. 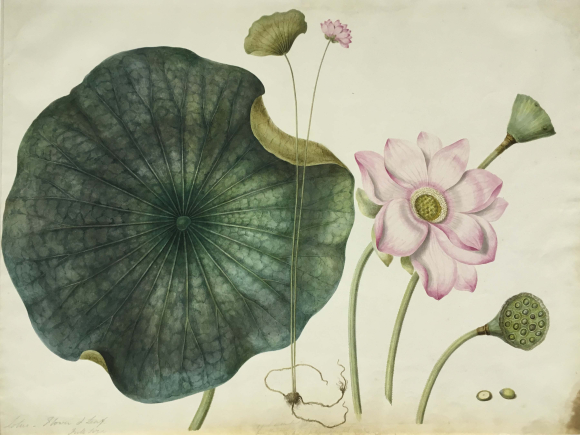 Our artist could also turn his hand to botanical drawings as in his pink lotus. He shows the full plant including stem and root, with close-ups of leaf, flower, fruit and seed of a particularly fine specimen, but like Sita Ram before him he was more interested in endowing the flower and leaf with shade than with the niceties of botanical requirements. His drawing of a maize plant somewhat similarly arranged, showing the full plant with details of leaf, flower and cob, is in the V&A (I.S. 16-1963).

As so often with Indian artists, whether working under Indian or British patronage, we have no documentation to help with the identification of Gilbert’s artist, and his name never appears on any of his works. It seems likely that he was a junior colleague of Sita Ram venturing down the same ‘picturesque’ path, but Sita Ram was a special case whose extraordinary talent accorded him special treatment and recognition; but we still do not know where he was trained before he appears with the Hastings in 1814 and what happened to him after they had both left India by 1823.  The ‘Gilbert artist’ is even more anonymous and we only know of his existence for a tantalisingly brief glimpse from 1822 to 1828.