This is the first of a series of blog posts looking forward to the British Library exhibition on Buddhism, 25 Oct 2019 - 23 Feb 2020

Every full moon day is an auspicious day for Buddhists, but the most important of all is the day of the full moon in May, because three major events in the life of the Gotama Buddha took place on this day. Firstly, the Buddha-to-be, Prince Siddhattha was born at Lumbini Grove on the full moon day in May. Secondly, after six years of hardship, he attained enlightenment under the shade of the Bodhi tree and became Gotama Buddha at Bodh Gaya also on the full moon day of May. Thirdly, after 45 years of teaching the Truth, when he was eighty, at Kusinara, he passed away to nibbana, the cessation of all desire, on the full moon day of May. Therefore, Vesak or Wesak - the day of the full moon in the lunar month of Vesakha, which falls this year on 19 May - is a very important day for Buddhists to celebrate the birth, enlightenment and parinibbana of the Buddha.

The birth of Siddhattha Gotama
The Buddha-to-be was born in about the year 563 BCE in the kingdom of the Sakyas (in present-day southern Nepal) on the full moon day of the month of Vesakha. His father was King Suddhodana and his mother was Queen Maya. They named their son Siddhattha, which means ‘He who achieves his Goal’. Soon after the birth, the king's wise men predicted that the little prince would become either a universal monarch, or a Buddha, ‘awakened one’. His father tried to prevent his son from coming into contact with any religious path, as he wanted his son to be his successor. 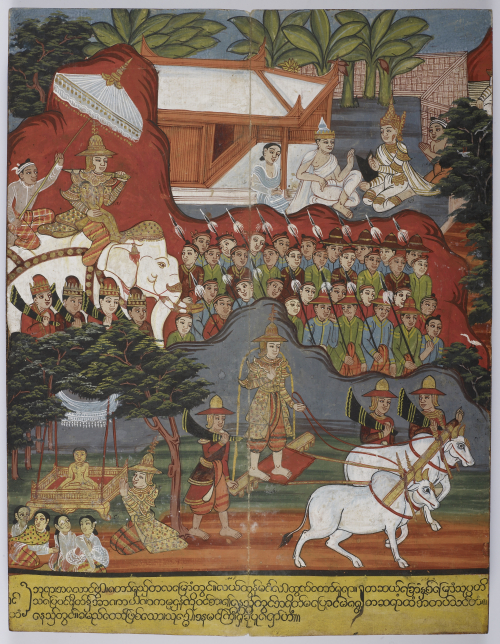 The king took his little son, Prince Siddhattha, to the royal ploughing ceremony and left him to sleep in a tent under a nearby Eugenia tree. Instead, the boy seated himself cross-legged on the bed, and entered into his first state of meditation. On seeing this, the king was amazed, and paid homage to his son. British Library, Or. 14297, f. 8

Enlightenment
The young prince Siddhattha was brought up in great luxury and at the age of 16 married his cousin, princess Yasodhara. At the age of 29, when he encountered four signs - an old man, a sick man, a corpse and an ascetic - he decided to leave his life of luxury, and set out in search of truth and peace. He thus left the city of Kapilavastu and became a wandering ascetic. For nearly six years, in the course of his search for the truth, he practised various forms of severe austerity and extreme self-mortification, until he became weak and realised that such mortifications could not lead him to what he sought. He changed his way of life and followed his own path, the middle way. He sat cross-legged under the foot of the peepal bodhi tree (Ficus religiosa) and determined not to rise without attaining enlightenment. 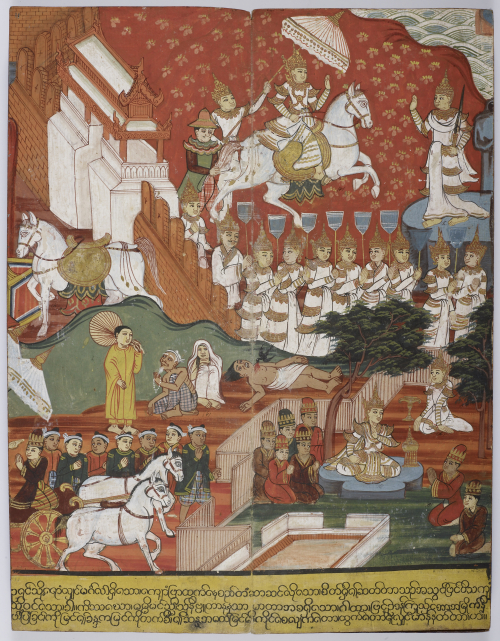 Prince Siddhattha rides out of the palace after encountering the Four Signs: an old man, a sick man, a corpse, and a monk. British Library, Or. 14297, f.11

Siddhattha continued to search for the solution to the true meaning of life. After six years of hardship, working to find the right spiritual path and practising on his own to seek enlightenment, the prince reached his goal. After forty-nine days, at the age of 35, he attained enlightenment and became a supreme Buddha, on the full moon day of the month of Vesakha at Bodh Gaya. He also became known as Siddhattha Gotama, Gotama Buddha, Sakyamuni Buddha or simply the Buddha. 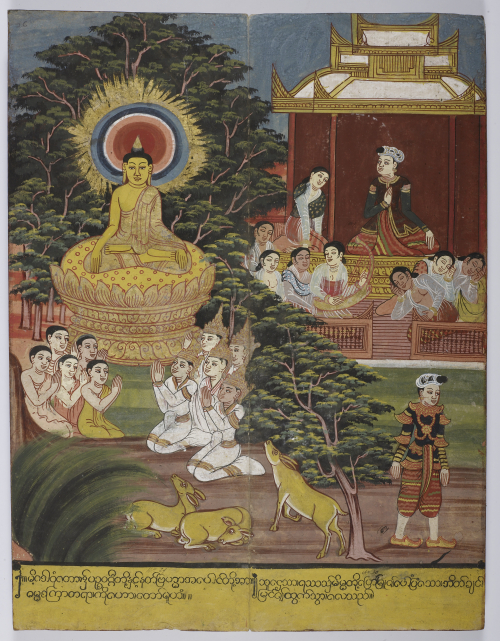 The Buddha preached his first sermon to five ascetics (left) and gods (right) in the deer park at Isipatana. British Library, Or. 14297, f. 26

Soon after his enlightenment he gave his first discourse, Dhammacakkappavattana Sutta or Turning the Wheel of Dhamma, to five ascetics in the deer park at Isipatana in Benares. After hearing his teaching, the five ascetics became his first disciples. His teaching attracted many followers and they joined the Sangha, the community of monks. He then visited his father, who was ill, to preach the Dhamma. After hearing the Buddha’s teachings the king attained arahatta (perfect sanctity) before he passed away. The Buddha then preached the Abhidhamma or the Higher Doctrine to his former mother, who was reborn as a deva with other deities in the Tavatimsa heaven. He also founded the order of Buddhist nuns. During his long ministry of forty-five years, the Buddha walked throughout the northern districts of India, and taught about the suffering of life, how to end it, and how to attain peace and nibbana, to those who would listen.

Mahaparinibbana (Death)
At the age of 80 the Buddha set out on his last journey with Ananda, his cousin and beloved disciple, and a group of bhikkhus from Rajagaha to Kusinara. The Buddha arrived at Vesali and stayed there during the rainy retreat (vassa). After leaving Vesali, on his way to Kusinara, he arrived at Pava where he had an attack of dysentery. The Buddha then arrived at Kusinara and lay down on a couch between two sal trees in the grove of the Malla kings. Though he was very weak, he addressed Ananda and the bhikkhus, and preached the Mahasudasana Sutta and made one last convert. Then the Buddha attained parinibbana or entry into the final nibbana on the full moon day of the month of Vesakha (May). The Buddha’s body was placed in a golden coffin upon a pyre, and a gilded and white umbrella was held above. Mahakassapa, the Buddha’s senior disciple, kneels before the Buddha’s coffin, uncovers the Buddha’s feet and pays homage with full prostrations. The grieving monks are gathered at the Buddha’s funeral in respectful adoration. The Malla kings also gather together to pay their respects to the Buddha with perfume, incense, dancing and music. British Library, Or. 14298, f. 20

The sacred relics of the Buddha were divided and enshrined across Asia in monuments called stupas. These stupas are considered by Buddhists to be the living presence of the Buddha. These sacred places became centres of pilgrimage where people come and honour the Buddha, who taught the Dhamma and established the Sangha.

The Vesak Festival
Vesak, also known as Buddha Day, is observed by Buddhists in South, Southeast and East Asia, as well as in other parts of the world, as "Buddha's Birthday". The festival of Vesak commemorates the birth, enlightenment, and death (parinibbana) of Gotama Buddha in the Buddhist tradition. As the Vesak full moon day is the most important day in the Buddhist calendar, many Buddhists go to the pagodas in procession to pour water at the foot of the sacred tree in remembrance of the Buddha’s Enlightenment. The Peepal Bodhi tree is the most sacred tree for Buddhists as it was under this tree at Bodh Gaya that Siddhattha attained Enlightenment and became a Buddha. Buddhists celebrate these historically significant events by going to monasteries, giving alms, keeping precepts and practising meditation. In return, the monks chant the scriptures, lead periods of meditation and give teachings on the themes of the festival. Vesak is widely celebrated across much of the Buddhist world, but especially in Southeast Asia, where it is considered an especially important time to perform meritorious deeds.

Posted by Annabel Gallop at 3:46 AM