The celebration of a marriage is one of Judaism’s happiest and most joyous communal events.

To mark the occasion a marriage contract – a ketubah [1] (literally ‘a writ’) is drawn up stipulating the couple’s binding obligations and responsibilities. The writing of a ketubah has been an integral part of Jewish weddings for over 2,000 years.

A mandatory deed given to a Jewish bride on her wedding day for safekeeping, the ketubah is considered to be one of the earliest documents granting women legal and financial rights. Its traditional Aramaic text lays down the groom's financial obligations towards the bride, thus ensuring her protection and security, should the marriage dissolve, or the husband pass away. Depending on their geo-cultural area of production, or the social position of the families involved, Jewish marriage contracts might also stipulate: the provision of food and clothing by the husband, his pledge not to take a second wife, the dowry the wife brings to the household.

Since this is effectively a formal transaction, the contract is usually signed by at least two male witnesses, either before or immediately after the marriage ceremony. The ketubah is customarily read out loud to the couple during the wedding service, under the bridal canopy (hupah). The art forms found in Jewish marriage contracts vary from country to country, and reflect the artistic developments and trends of their original locales, at particular periods. Yet more than just being visually appealing objects, ketubot are historical records, revealing social patterns, traditions and values within the Jewish communities they stemmed from.

Few decorated Jewish marriage contracts from the Middle Ages have survived. The earliest examples, dating from around the 10th century CE, were discovered in the Cairo Genizah, a storeroom of discarded religious and secular Jewish documents, which had been preserved for nearly one thousand years, in the attic of the Ben Ezra Synagogue in Fustat, old Cairo.

From around the 14th century CE onwards, the custom of decorating ketubot flourished among communities of the Sephardi diaspora, particularly in Italy, spreading gradually to other Jewish diasporic centres, including those in Asia.

In Italy the art of the ketubah reached its pinnacle in the 17th and 18th centuries CE. Beautifully ornamented specimens were executed by highly skilled scribes and illuminators, on parchment or vellum. Characteristic adornments found in Italian ketubot include: biblical scenes, cherubs, coats of arms, micrographic designs, temple columns, zodiac signs and various others.

Seen here is an elegant, exquisitely decorated contract from Modena, recording the nuptials of Ephraim son of Kalonymus Sanguini, and Luna daughter of Mordecai Faro. The elaborate ketubah features an imposing architectural structure, topped by winged cherubs holding trumpets and leafy branches. The magnificent double border is composed of intricate micrographic lacework, surrounded by cut out patterns on a red ground inhabited by biblical vignettes, and the signs of the zodiac. Perhaps in an attempt to increase its value, the contract’s original date of 1757 was changed to 1557. 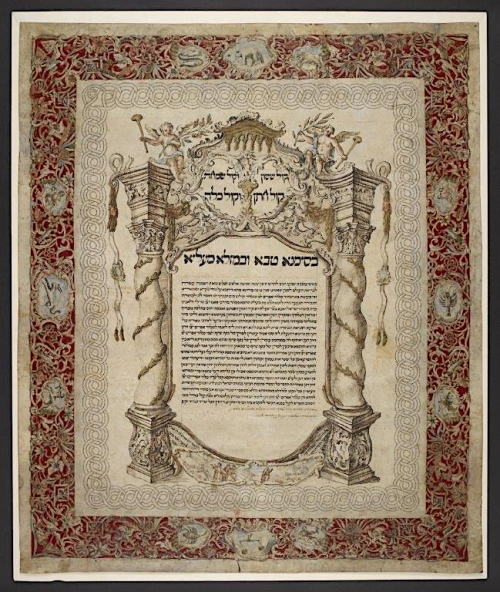 Oriental marriage contracts are scarcer than European ones, and serve as important examples of Jewish art and illumination of the areas they originated from. Some specimens flaunt bold and brilliant colouring and crude designs, while others exhibit native motifs and indigenous symbols. Here are two telling examples from our collection.

The first is a paper ketubah given by Pinḥas, son of Yosef, to Batsheva, daughter of Nethan’el in Herat, on 15th of Sivan, 5649, corresponding to 14th June 1889. The terms follow a fixed Afghani formula that specifies a gift from the groom of 200 and 25 zuzin (ancient Jewish coinage struck 2nd century CE), and his tosefet (additional gift) of 10 zuzin. The bride’s dowry amounts to 80 zehuvim (gold coins). 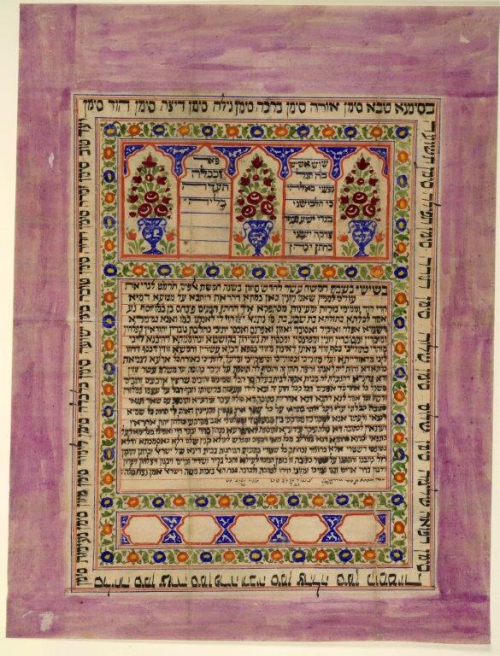 Although Jews have lived in Herat since early Islamic times, it became the largest and most influential Jewish community in Afghanistan during the 19th century CE, when persecuted Jews from the Persian town of Meshed streamed into Herat. As a result, decorated Jewish marriage contracts produced in Herat share many artistic characteristics with contracts from neighbouring Meshed.

The decorative programme is typical of contracts issued in Herat, and displays Islamic and Persian influences. The layout, as a whole, is very reminiscent of Persian carpets with a well-planned, orderly pattern. Written neatly in rows outlined in red ink, the square calligraphic text of the ketubah proper is framed by two concentric narrow bands. The rectangular band closest to the text is embellished with stylised violet and orange flowers and green foliage. The outer border is inscribed with copious good wishes, arranged in alphabetical order, each one beginning with the word siman (Hebrew for omen or sign) – siman orah, siman berakhah, siman gilah and so forth.

There is a conspicuous emphasis on the number five in contracts issued in Herat as in this example. The upper register consists of five arcuated compartments: three of which contain a single floral vase, while the other two are filled with verses from Isaiah 61:10. The lower register is occupied by a frieze made of five blank frames which were customarily reserved for the witnesses’ signatures. Instead, three witnesses signed their names just below the last line of the ketubah text. The use of the five-fold motifs was intentional as the number five (hamsa) is considered to have magical and protective powers in Islamic and Jewish cultures.

The second exemplar on parchment, records the betrothal in 1887 in Calcutta of Ya‘akov Hai Yosef Avraham Ta‘azi to Simhah, the daughter of Natan Yosef Douwek ha-Kohen. The layout is typical of marriage contracts created for the Indian Jewish communities between the 18th and 20th centuries CE, and consists of two distinct sections, the opening formula, or superscription, in the upper register, and the contract itself beneath. The superscription is written in Hebrew square characters, whereas the contract is penned in a semi-cursive Hebrew script. The superscription starts with an invocation to God, followed by blessings and good wishes to the newlyweds, and ends with biblical verses relating to marriage and fertility. The mohar (the groom’s marriage payment), tosefet (additional increment), and dowry specified in the contract amount to 7,555 rupees.

The finely embellished border is densely filled with red birds interspersed with stylised pink flowers and green foliage. The naively painted rampant tigers above the superscription, and the two long-tailed blue peacocks facing each other, are regarded as representatives of Indian fauna. The pair of silvery fish in the centre symbolise fertility. These figurative and decorative motifs are specifically associated with marriage contracts created for the Baghdadi Jews who settled in India. 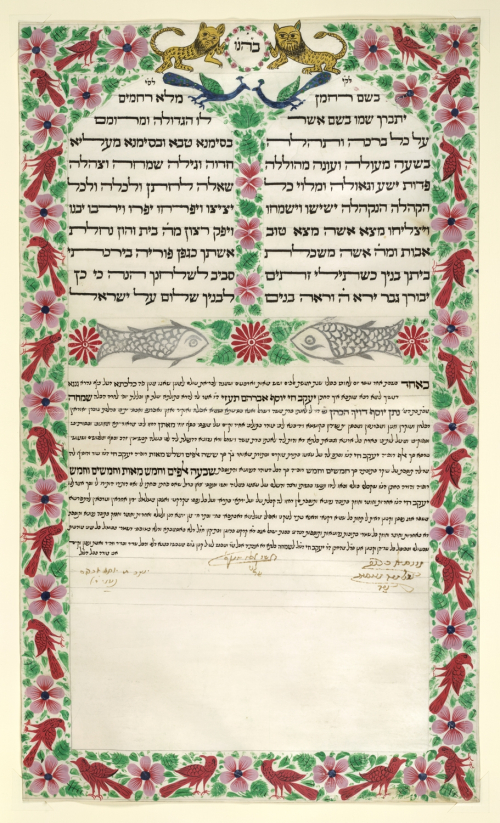 The development of printing brought with it new decorating techniques, which were also employed to embellish Jewish marriage contracts. A case in point is copper plate engraving. Invented in Germany in the 15th century CE, the use of copper engraving for book illustration became widespread only in the mid-16th century CE. From the 17 th century CE onwards, this complex, skilled craft gained greater popularity, becoming widely practised in Holland and other European countries, including England.

The handsome full copper engraved border adorning this London ketubah, was apparently modelled on a plate developed in Amsterdam in 1687. The contract documents the union of Elazar son of David Tsarfati and Rachel daughter of Joseph Cortisos, on 18 Iyar 5562, corresponding to 20 May, 1802. Penned in a semi-cursive Sephardi script the ketubah text is flanked on both sides with leaf-patterned pillars. Each vertical frame features a vase containing floral variations populated with birds. The top right vignette shows a courting couple, the top left features an expectant woman with two children, seemingly a symbol of fertility and motherhood. In the arched upper compartment, two winged putti hold a drapery inscribed: be-siman tov (with a good sign). Below the vase in the right hand border is the name H. Burgh, Sculpt. who appears to be the master printer responsible for the engravings. 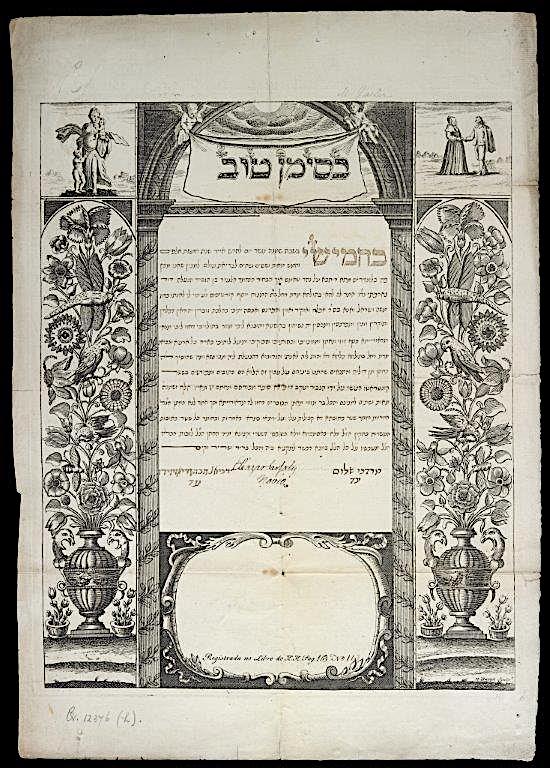 The four Jewish marriage contracts described in this blog represent just a fraction of our significant holdings. As a matter of fact, a cursory survey of the ketubot preserved in the Library’s Hebrew manuscript collection, has generated some very interesting findings:

More will be digitised and published on DM in the months ahead.