Today's guest blog is by Vivek Gupta, a historian of Islamic and South Asian art who is completing his PhD thesis “Wonder Reoriented: Manuscripts and Experience in Islamicate Societies of South Asia (ca. 1450–1600),” at SOAS University of London, History of Art and Archaeology. Vivek is currently based at the British Library for a research placement on illumination in Persian Manuscripts.

The art of the book in sultanate India, particularly of the fourteenth and fifteenth centuries, is notable for its eclecticism. Because of the sultanates’ evolving political terrain, the search for a coherent narrative of manuscript patronage and production is a challenge. In comparison to painting, one relatively overlooked feature of sultanate books is calligraphy. Here, we examine a script found in sultanate manuscripts that scholars have started to call naskhī-dīvānī. 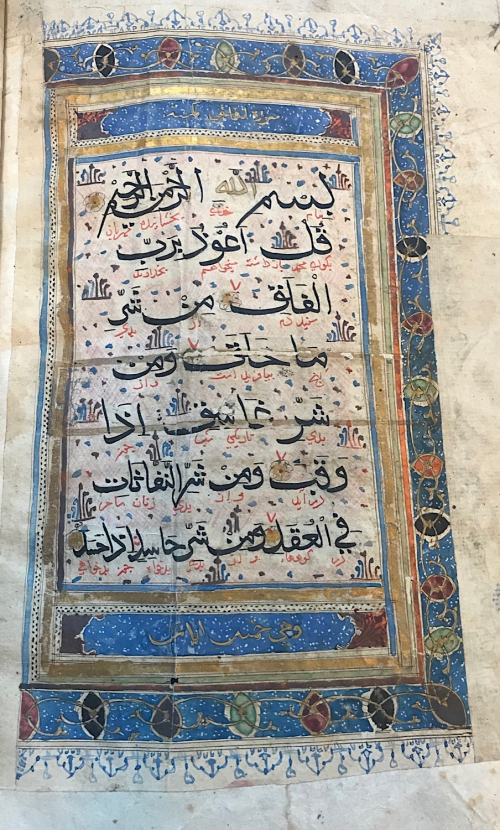 Appearing in the late fourteenth century, two styles of writing seldom seen outside of India are bihārī and naskhī-dīvānī. Bihārī is characterized by thick horizontal strokes specifically in terminating letters and thin verticals; diacritical markers are horizontal, rather than at a slant. In the Indian Qur’an manuscript (ca. 1450-1500) shown in Fig. 1, bihārī is in black. Bihārī evidently associates the script with the northeastern Indian region of Bihar[1], but the name remains a mystery, especially as it appears far beyond Bihar in places such as Bengal and the Deccan; by early-modern times it also reached Ethiopia. The British Museum’s catalogue, published in 1879, describes the script in the example here as “large and angular Naskhi” and dates it to the fourteenth century[2]. The name for this script is also unresolved in the catalogue of Khuda Bakhsh Library, Patna. The first volume of 1918 describes the script of a bihārī Qur’an as thuluth-i kūfī. The third volume of 1965 calls the script baḥr, which means ‘sea,’ while the fourth volume of 1995 designates it as khaṭṭ-i bihār (bihārī calligraphy)[3].

Even less understood than bihārī is naskhī-dīvānī. Naskhī-dīvānī, as the name implies, is a combination of a standard naskh and a dīvānī script often used for chancellery documents. In her pioneering research coining naskhī-dīvānī as a calligraphic style, Éloïse Brac de la Perrière describes it as such:

The bar of the kāf often terminates with a small hook, as with the alif that features a lower tail curving left of its vertical line. Some letters like the kāf are almost angular, however the ḥā’ and khā’ in the initial position and the final ligature of the yā’ with letters preceding it have a rounded appearance with a loop; the dāl is large and open[4]

As seen here in red, naskhī-dīvānī is often used in interlinear Persian translations of Qur’ans in bihārī script. It often appears in marginal glosses of such Qur’ans as well. Since it is frequently diminutive or paratextual to the bihārī script, it has a special affinity with bihārī. In many cases, the scribes responsible for both the bihārī text and naskhī-dīvānī paratext would have been the same individual.

One manuscript copied in a naskh script closely resembling a naskhī-dīvānī is an anthology of Persian poetry (Or.4110) assembled during the reign of the Sharqi Sultan Mubarak Shah of Jaunpur (r. 1399-1402). The manuscript is datable to the beginning of the fifteenth century. In these diagrams for reading poetry the script possesses the angularity of the naskhī-dīvānī and distinctive terminating letters (fig. 2). In the spiraling diagrams shown on the right we see a thick black stroke akin to the bihārī script. The orange and red floral decoration and blue roundels also are typical of bihārī Qur’āns. The craftsmen responsible for this manuscript thus were certainly familiar with the calligraphy and decorative programme of a bihārī manuscript. 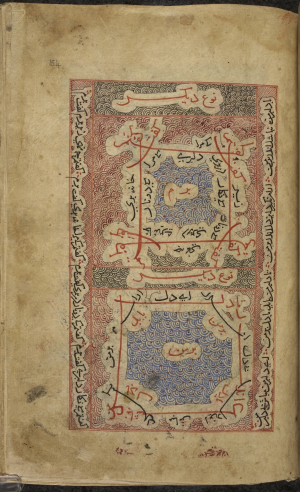 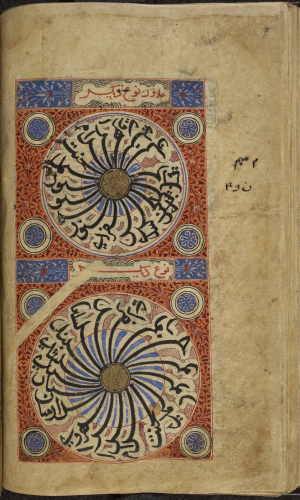 Beyond Arabic and Persian manuscripts, naskhī-dīvānī was also the leading script for the earliest Hindavi vernacular premākhyān, or story of love, the Chāndāyan (1379) of Mullāh Dā’ūd. This was a story told in a highly Sanskritized idiom that borrowed from Persian poetics. Although there has been no critical analysis of the paleography of the Chāndāyan manuscripts to date, it is clear that the script of the majority of these manuscripts is a naskhī-dīvānī adapted for the vernacular (fig. 3). Further, the layout of these texts borrows directly from Persian poetry collections (dīvāns). That these manuscripts were produced in a number of regions (Gujarat, Malwa, Delhi-Agra) over the course of the fifteenth and sixteenth centuries attests to the spread of this script. Here, it is worth questioning whether or not the scribes of these vernacular manuscripts were the scribes of bihārī Qur’ans. If this were the case, this offers evidence of a multilingual literate culture in which trained scribes could produce manuscripts in varying scripts. 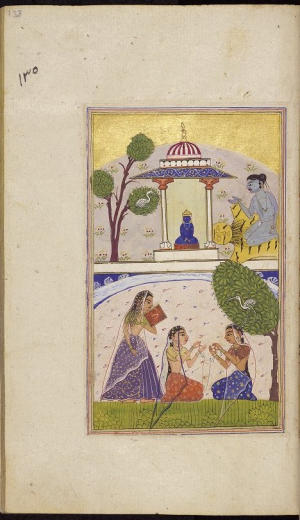 In addition to manuscripts of deluxe quality, naskhī-dīvānī appears in unillustrated and unilluminated books from the sultanate world. For example, a copy of the Tarjumah-i kitāb-i Bārāhī, the fourteenth-century Persian translation of Varāhamihira’s sixth-century Sanskrit encyclopedia the Bṛhatsaṁhitā, is inscribed in naskhī-dīvānī (fig. 4)[5]. We know the manuscript passed through the Deccan sultanate of Golkonda because it bears a seal of Muhammad Qutb Shah (r.1612-26), so it must date from before the end of his reign. 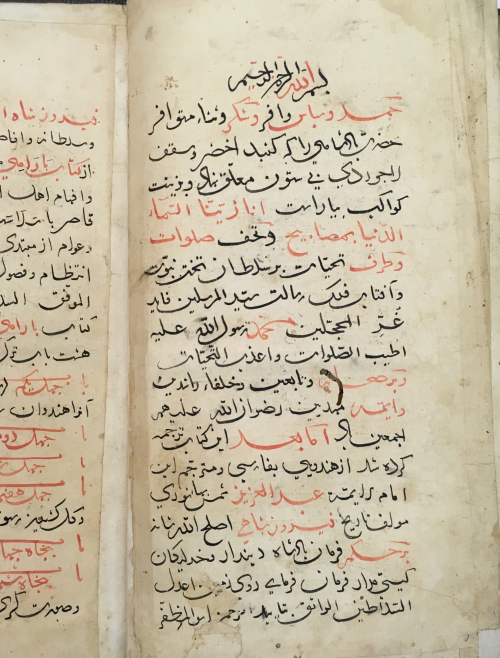 With the substantial and intriguing evidence of naskhī-dīvānī in Qur’ans, Hindavi poetry, and secular works, this script was widespread in a number of languages and genres. This opens up possible lines of inquiry about the scribes’ level of literacy in these languages. For the moment such questions remain unanswered although while it is clear that there are very few cohesive threads in the manuscript culture of sultanate India, naskhī-dīvānī may well prove to be a primary one.

With thanks to Emily Shovelton and Eleanor Sims