June is Pride Month, which means we celebrate the histories and experiences of LGBTQQ2SA+[1] people. A common complaint that we hear during the month is that the acronyms attached to it are unwieldy and incomprehensible; a criticism that’s easily dispelled through a quick explanation of each letter or symbol. But this discussion obscures a far more complex, and trickier, question: what does it mean to be gay (or, for that matter, lesbian, trans, queer or two-spirit)? Is it just a matter of who you fancy, or is it much deeper, a nexus of desire, outlook, self-image and social relations? Answers aren’t always easy to give for those of us who live in the post-Stonewall era, and they’re even thornier when we try to apply contemporary terms to historical content. 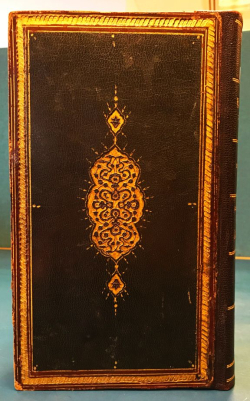 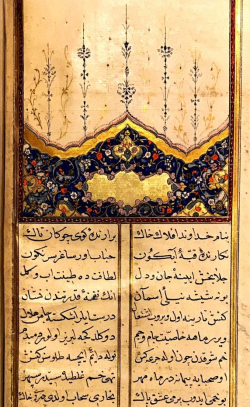 Stamped and gilded binding of the Hamse-i Atā’ī (Or. 13882), alongside f. 1v with one of its magnificent ‘unvāns.

That is, in essence, one of the most perplexing issues in dealing with Or. 13882, an 18th-century Ottoman recension of the Hamse-yi ‘Atā’ī, ‘Atā’ī’s four extant mesnevis. The work is a beautiful specimen of the Ottoman arts of the book, featuring four illuminated ‘unvāns, thirty miniatures, marbled end-papers and black and maroon morocco binding that has been stamped with gilded cartouches and rope patterns. The presence of two seals and three inscriptions attest to the circulation and desirability of this particular volume; hardly surprising, given its beauty and the slightly scandalous nature of the content. The poetry itself is an oblique response to the earlier Khamsah of Nizami, but takes up local themes. Wine and music in the Imperial court; moral and ethical issues; and social mores and values such as heroism are treated in the first three mesnevis, the ‘Alemnüma, the Nefhatül’Ezhar and the Sohbet-ül-Ebkar. While these topics were often raised in mesnevis for the purpose of Sufi education and instruction, it does not appear that this was always the case in ‘Atā’ī’s work. The fourth mesnevi, Heft Han, is perhaps the most interesting for our purposes. Gibb, in the third volume of his A History of Ottoman Poetry, described it as follows: “The Heft Khwán or Seven Courses is more purely mystical in tone… I have never seen this poem, but Von Hammer describes it as a most unhappy work, consisting simply of a series of trivial stories and trite moralities.”[2] As Andrews and Kalpaklı explain in The Age of Beloveds, it contains seven accounts, the first six of which are moralistic tales, while the seventh relates the story of two male lovers. This final installment tells of the two young men’s “frolics” in Istanbul, of their eventual capture and enslavement by Europeans during a pilgrimage by sea to Egypt, and of the two European men who in turn fall in love with them.[3] This is a fairly original text, an example of ‘Atā’ī’s creativity and imagination.[4] 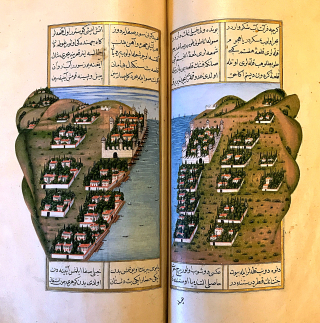 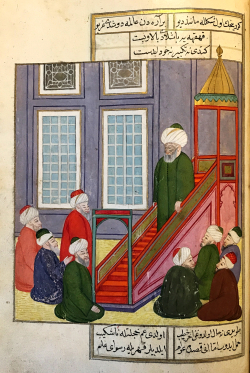 Examples of the colourful, dynamic illustrations of the Bosphorus (left) and of a a group of men in a mosque, gathering around the minbar.

That, however, is the beginning, rather than the end, of this queer tale. The British Library’s acquisition record for the item reads: “Some [miniatures] illustrate historical events and scenes, others various anecdotes. Those on folios 103r, 108v, 158r and v, 161r, 166r and v are of a pornographic nature. The double miniature depicting the Bosporus, ff. 68v-69r, is of fine quality.” Given that the manuscript was purchased in 1979, this mention of “pornographic” material likely relies on an understanding of the term closer to our own usage, rather than that of the Victorian age. Of course, the line between pornography and art is a blurry one. In 1964, it caused US Supreme Court Justice Potter Stewart to explain that a precise definition of the boundary was unnecessary, as “I know it when I see it.” The American philosopher and writer Susan Sontag was perhaps more helpful when, writing about morality and artistic expression, she argued that art appealed to contemplation, while pornography, in turn, sought to excite.[5]

Whether according to Stewart’s guidelines, or those of Sontag, a quick view of some of the illustrations included in the Hamse make it clear that these images would likely be kept behind the 18+ bar of any corner store’s magazine rack. Those highlighted in the acquisition slip contain graphic depictions of female and male genitalia; masturbation and vaginal and anal penetration; and sex between couples and in groups. Of importance for this article, a number of the illustrations narrate encounters between men; some bearded, others not. The pictures themselves often tell a story. One pair shows five men seated to eat together, after which three of them are engaged in a menage-à-trois. Another depicts two men having sex while a large group of onlookers spy on the lovers, ultimately exposing them to the authorities. Given what we know of the plot, these images are doubly queered: first, because they involve sex between men; and secondly, because everyone in them is in Ottoman costume, despite the setting of the tale in Europe. Boone interprets the Heft Han as, partly, an allegorical tale about morality and policing of sexuality in the Ottoman Empire (rather than Europe), and this geographical displacement might be the most visual evidence yet supporting his claim.[6] 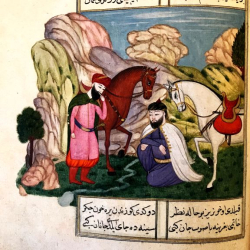 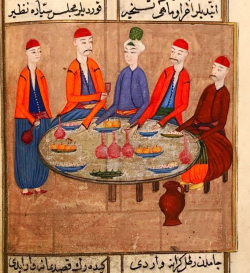 Two horsemen, part of one of the other tales in the Hamse, along with the first part of the infamous dinner scene from the Heft Han.

Moreover, the images raise important questions about sexuality and identity in 17th- and 18th- century Ottoman circles. Were the characters depicted in these stories gay? Were their sex acts deemed to be indicative of their identities and self-perceptions? What of the male readers: can we infer anything about their desires? Did a female audience enjoy these stories too, and how does that inform our understanding of their sexuality? Such questions are hard to answer without the input of the individual readers themselves, highlighting the intensely personal and subjective nature of identity in the first place. What’s more, as Serkan Delice has shown in his work “‘When female friends increase, lovers decrease’: Gender, Sexism and Historiography in the Ottoman Era”, such questions can easily become fodder for those with political agendas about contemporary citizens.[7]

The act of asking such questions isn’t without its pitfalls. To start with, 16th-, 17th- and 18th-century European observers were apt to insist upon a widespread Ottoman practice of pederasty, despite a lack of firm evidence to suggest that it was any more common than in Western Europe.[8] This Islamophobic trope has survived in contemporary discourse, but it was tempered in 19th- and 20th-century scholarship by another trend: that of erasing sexual non-conformity. Translators and commentators have played down the presence of same-sex desire in Ottoman poetry. They instrumentalize authors’ predilection for allusion and allegory, as well as Turkish’s lack of gendered pronouns, to gradually nudge English versions of classical Ottoman poems into the realm of heterosexual love.[9] Similar dynamics are just as visible in 20th-century Turkish scholarship.[10] To paraphrase Shakira, however, these pics don’t lie. Both figurative and literal imagery pointing to same-sex desire and intercourse motivated scholars in the latter part of the 20th century to begin discussing more openly homosexual themes within the Ottoman canon. This is no niche field: a whole genre of Ottoman poetry, the şehrengîz, contains plenty of examples of the male poet’s love or lust for another man. It was interwoven into broader Sufi schools of expression and enunciation, a genre that is not as easily tied to specific segments of the population or identities as would be contemporary LGBT fiction.[11] 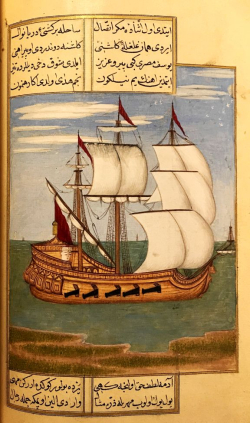 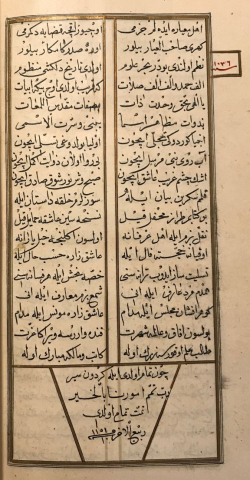 An unlucky ship on the rolling waters of the Mediterranean, alongside the manuscript’s colophon, including date it was copied: 10 Rebiülahir 1151 AH / 28 July 1738 CE).

This leads us back to our original question: is it gay? Who knows if a definitive answer that satisfies everyone will ever be formulated. In some ways, even posing the question says more about us than it does about 17th- or 18th-century Ottomans. Identity is something intensely personal, and the categories that we choose or that we have chosen for us never manage to capture in full the reality of our existence. What is clear, though, is that sexual diversity is not something new; nor is it something that has been enjoyed only in recent years. As the miniatures of this version of the Hamse-i ‘Atā’ī demonstrate, desire has long come in many shapes and forms. As long as we avoid any ill-fated journeys by sea, it’s up to us to describe and celebrate it in any way we choose.