Some new old books on and from the Malay world

Most of my blog posts are about manuscripts from maritime Southeast Asia, but the majority of items in the British Library are printed, including perhaps the most important collection in the world of early Malay printing. The Library also holds printed books in languages such as Javanese, Sundanese, Balinese, Batak and Bugis, dating from the earliest printed examples through to contemporary publications, as well as rare imprints in all languages from Southeast Asia. Occasionally there are opportunities to fill in gaps in our holdings, and presented below is a selection of early or relatively rare printed books from or on the Malay world acquired over the past few years.

Notes on secret societies, compiled by C.T. Dobrée, is a guide to Chinese triads or secret societies operating in Malaya in the post-war era, with information on the secret codes of language and gestures by which members could identify each other.  This book was compiled as a report for the Federation of Malay Police service in 1953, and printed at the Caxton Press in Kuala Lumpur. Charles Thomas Winston Dobree was appointed Superintendent in the Federation of Malaya Police service in 1948, and at the time of writing was Assistant Commissioner. He appears to have become quite an authority on Chinese gambling syndicates, for he also authored Gambling games of Malaya, printed at the Caxton Press in 1955. 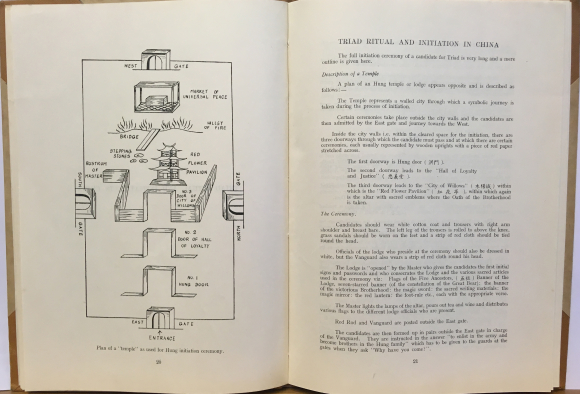 The study of languages is one of the great strengths of British Library collections, and whenever possible I try to add to our collection of early grammars and dictionaries of Austronesian languages. One new acquisition is by G.J. Grashuis, Maleische spraakkunst met vertaaloefeningen, printed in Zwolle in 1898. This copy bears the ex libris inscription of H. Kreemer; it is tempting to wonder if he was a relation of J. Kreemer, author of the Acehnese-Dutch dictionary Atjehsch handwoordenboek: Atjehsch-Nederlandsch, published in Leiden by E.J. Brill in 1931 (British Library, 14635.d.17). H. Kreemer evidently did not find this book of much interest, for the pages are still uncut.

From the following century is a small English-Iban phrase book, by Father Leo J. Barry of the Roman Catholic mission in Sarawak. The work was first printed in Kuching at the Government Press in 1958, and this is an (undated) copy of a later printing, probably of 1962.  As indicated by the title, this book was arranged by whole phrases rather than words, and covered the type of sentences deemed helpful for a European working in Sarawak. 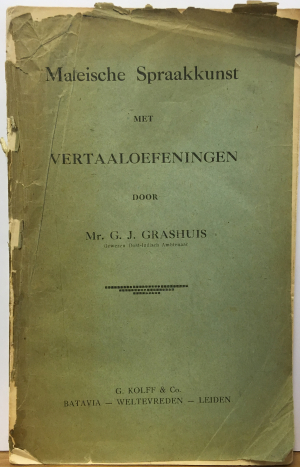 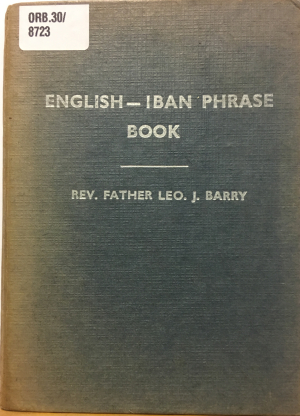 Of interest to print historians, linguists, epigraphers, typographers and graphic designers is a book with samples of type in different scripts from the famous Lettergieterij 'Amsterdam' voorheen N. Tetterode (Type Foundry 'Amsterdam', formerly known as N. Tetterode), entitled Proeven van Oostersche schriften, published in 1910. It contains examples of its types for scripts ranging from Chinese and Japanese to Coptic and Syriac and Hieroglyphic, as well as Malay, Javanese, Old Javanese, Bugis, Makassarese (including a 'cypher' script), Batak and Mandailing. 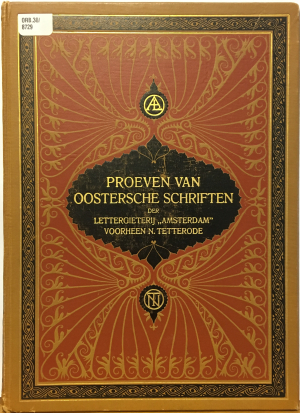 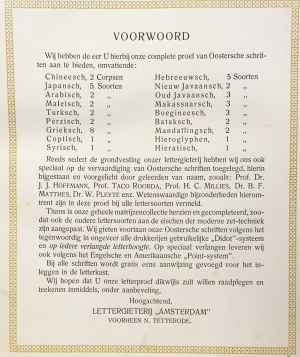 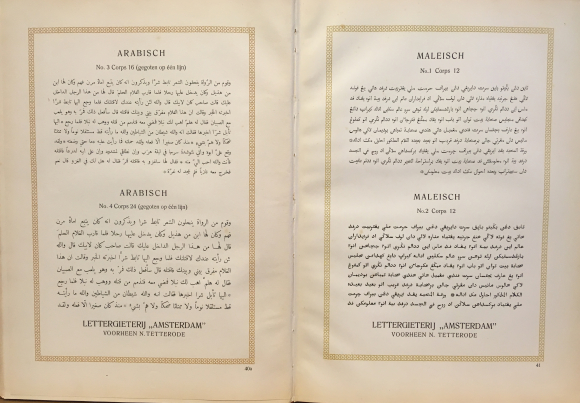 The preferred technology for Muslim printing in Southeast Asia was lithography, but the first Malay newspaper, Jawi Peranakkan, published in Singapore in 1876, was typeset. The small book shown below – Hikayat Aluddin, or the Story of Aladdin – was issued by the prolific publisher Haji Muhammad Siraj in Singapore and printed at the Jawi Peranakkan press, using the same small type familiar from the newspaper.  However, lithography is used for the illustrations and captions within the book. The front cover, with the date 1889, may have been the first part of the book to be prepared, for the colophon on the last page gives the date of completion of printing clearly as 1 Ramadan 1307  equivalent to 20 April 1890 (Proudfoot 1993: 121). 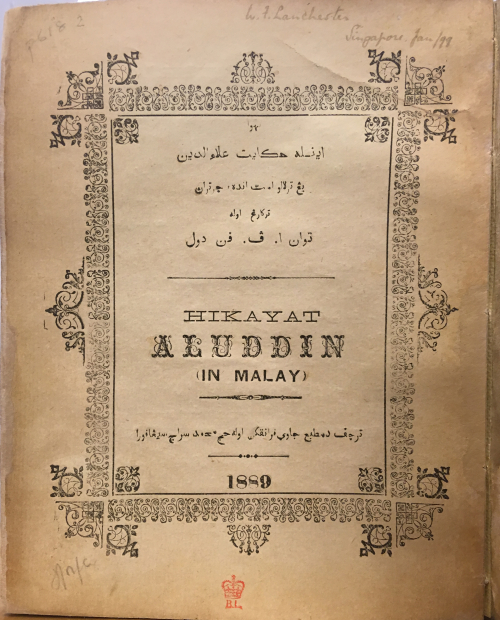 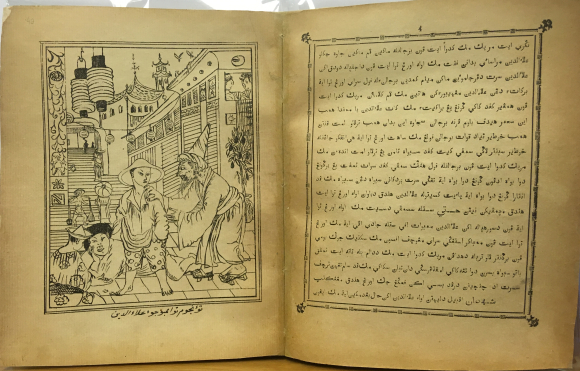 Colophon to Hikayat Aluddin, giving the date of printing at the Jawi Peranakkan press as 20 April 1890 and the name of the publisher as Haji Muhammad Siraj. British Library, ORB.30/5554

As noted above, throughout the second half of the 19th century lithography was the print technology of choice for Muslim publishers because of its ability to reproduce the elegant flowing lines of Arabic calligraphy and to emulate the look of Islamic manuscript books.  Shown below is a typical lithographed publication of this period from a Malay Muslim press, published by Haji Muhammad Taib of Kampung Bali Lane, Singapore, in 1895 (Proudfoot 1993: 483). This is a work on the practice of Islamic law (fiqh), Sullam al-mubtadi fi makrifat tarikat al-muhtadi, composed in 1836 by Syaikh Daud ibn Abdullah al-Fatani (1769-1847), a renowned scholar from Patani in southern Thailand, who spent most of his life studying and writing in Mecca. According to Bradley, this is one of Syaikh Daud's most popular and influential works, and no fewer than 75 manuscript copies are known, in addition to at least eight published editions. The book is inscribed at the beginning and end of the book with the name of its owner, Muhammad Syam bin Abdullah Menjalar, who has also added manuscript annotations in the margin, explaining in Malay certain words in Arabic. 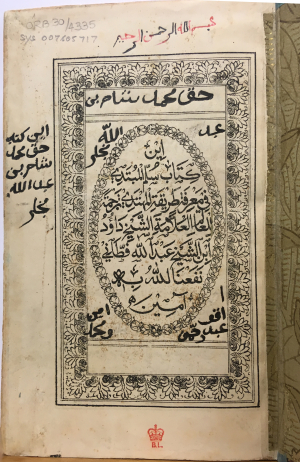 With thanks to my colleagues Sud Chonchirdsin and Marja Kingma for cataloguing these items.