Asalha Puja or Dhamma Day: the start of the Buddhist Lent

This is the third of a series of blog posts looking forward to the British Library exhibition on Buddhism, 25 Oct 2019 – 23 Feb 2020

Buddhists celebrate Dhamma Day on the full moon day of July, signalling the beginning of the period of vassa (rainy season retreat or Buddhist Lent). Dhamma Day reminds Buddhists to express their gratitude to the Buddha and his teachings. It is one of the most important days in Buddhism as it marks the beginning of the Buddha’s teaching, for it was on the full moon day of July that the Buddha preached his first sermon in the deer park at Sarnath to the group of five ascetics who had previously been his companions. In the sermon, Dhammacakkappavattana Sutta, Discourse on Turning the Wheel of the Dhamma, the Buddha advocates a middle way between sensual indulgence and self-mortification. The essence of his teaching concerns: the truth of suffering; the truth of the cause of suffering; the truth of the cessation of suffering; and the truth of the way of life that is free of suffering. The original Teachings are found in the ‘Pali Canon’, the ancient scriptures of Theravada Buddhism written in the Pali language. While listening to his discourse, the ascetic Kondanna achieved the first level of sanctity (Sotapanna), and became the first disciple of the Buddha to take ordination as a monk. Soon afterwards, the other four ascetics followed him into the Buddhist order. Therefore, Asalha Puja or Dhamma Day – which falls this year on 16th July – is a very important day for Buddhists. 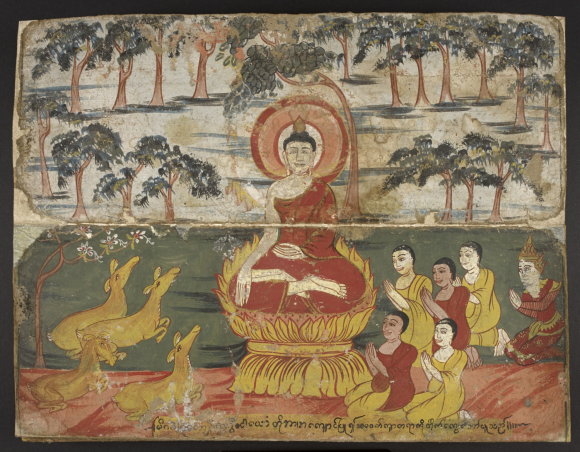 The Buddha gives his first sermon Dhammacakkappavattana Sutta to five ascetics - Kondanna, Vappa, Bhaddiya, Mahanam and Assaji - in the deer park at Sarnath on the full moon day of July. This sermon contains the essential teachings of the Four Noble Truths and the Noble Eightfold Path. After listening to his sermon, the five ascetics became the Buddha’s disciples. British Library, Or. 14823, f. 38

Vassa: the Buddhist Lent
Vassa is an annual monastic retreat practised especially in the Theravada Buddhist tradition, which lasts for three lunar months from July to October. In the early days of the Sangha – the Buddhist monkhood – the monks had no fixed abode, but wandered throughout the year and dwelt under the shade of the forest trees to meditate. After attaining Enlightenment and proclaiming the dhamma, the Buddha spent the first vassa at Sarnath. There are practical reasons for why the Buddha instructed his monks not to make long journeys for the three months of the rainy season. During the monsoon season it was extremely difficult for the monks to travel as the paths and lanes were covered with water and mud, and walking at this time along muddy paths could also damage the grass and kill or injure countless tiny creatures. Therefore the three months rainy retreat, from the full-moon day of July to the full-moon day of October, came to be observed by monks on the recommendation of the Buddha himself.

When the Bodhisatta Siddhattha Gautama had renounced the world, and in the course of walking around accepted offerings of food at Rajagaha, King Bimbisara, ruler of Magadha, requested that he visit him as soon as he achieved his goal. In accordance with this promise the Buddha visited Rajagara after attaining enlightenment. The king donated his bamboo grove and built the Veluvana monastery, or arama, for the Buddha and his monks. The term arama refers to a dwelling place for monks during the annual rains retreat. Veluvana was the first arama accepted by the Buddha, and a rule was passed allowing monks to accept such aramas. After the great donation, the king became the royal patron of the Buddha during his life time. The Buddha spent three rainy seasons in his first monastery of Veluvana, and numerous Jatakas, or birth stories of the Bodhisatta, were recited there. The Buddha’s disciples Sariputta and Moggallana joined the Order at this first monastery. During these three months monks remain inside monasteries, devoting their time to intensive meditation, proclaiming and learning the doctrines, and reciting the patimokkha or teaching dhamma to lay people who come to them to observe the uposatha sila (Eight precepts).

The Buddha ascended to Tavatimsa heaven. He spent three months there in retreat, teaching his mother, who was then reborn as a deva in Tusita heaven to fulfil a debt of gratitude. He expounded the Abhidhamma or higher teachings to his mother deva and other celestial beings at Tavatimsa heaven. He also repeated these teachings to his disciple Sariputta, and Sariputta then became a master of the Abhidhamma. Abhidhamma Pitaka (literally ‘the basket of the Buddha’s Higher Doctrine) is one of the principal sections of the Buddhist canon, or Tipitaka. It explores the profound philosophy of the teaching and is a most important work. 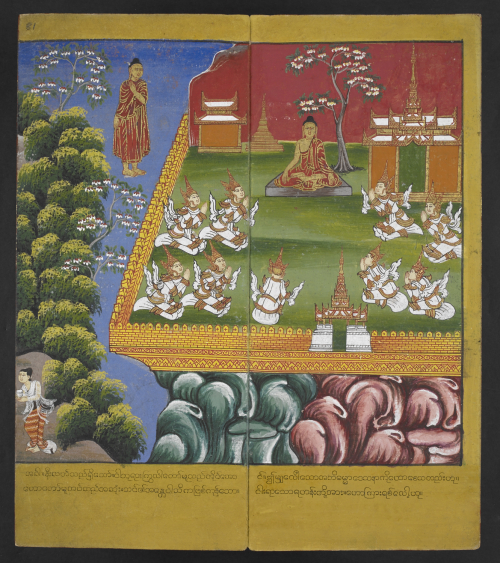 The Buddha spends the seventh vassa at Tavatimsa heaven to preach the Abhidhamma (higher teaching) to his mother, who was reborn as a deva, and other celestial beings. British Library, Or. 14405, f. 81 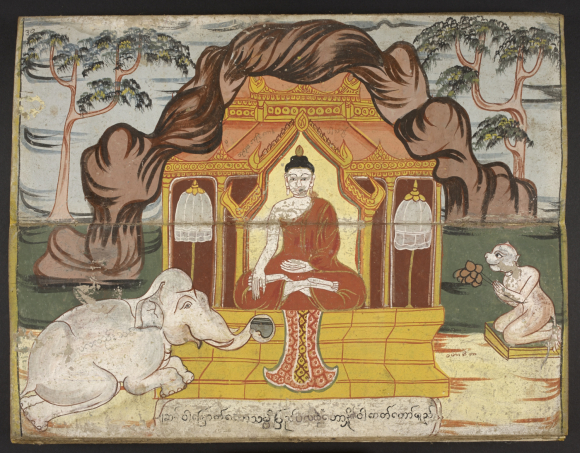 While the Buddha was spending the tenth vassa in the Parileyyaka Forest, an elephant and a monkey ministered to his needs. British Library, Or. 14823, f. 30

Ordination ceremonies
Ordination ceremonies can take place in any month of the year, but are especially important during the Buddhist Lent. The ordination ceremonies take place with all possible kinds of giving. Buddhists believe that the giving of one’s own son to join the Order is the most meritorious act possible. It is also a meritorious deed for the person who enters into the Buddhist monastic order (Sangha) themselves. The ceremony is not necessarily big or grand but the eight requisites are essential. There must be an assembly of five monks who sponsor the ordination. The Kammavaca – the Buddhist ordination text – is uttered at the ceremony by the presiding monk and the novice or candidate monk-to-be.

Soon after attaining enlightenment the Buddha founded the order of monks or Sangha. Yasa came from a wealthy background, but left his home as he was dissatisfied with his life. After hearing the teachings of the Buddha, Yasa became the sixth bhikkhu or monk. After the Buddha ordained Yasa, his closest friends Vimala, Subahu, Punnaji and Gavampati followed him into the Sangha. Within two months a further fifty of Yasa’s friends had joined the Sangha. The Buddha’s son the Venerable Rahula who was still a novice received his Higher Ordination (Upasampada) at the Jetavana Monastery. 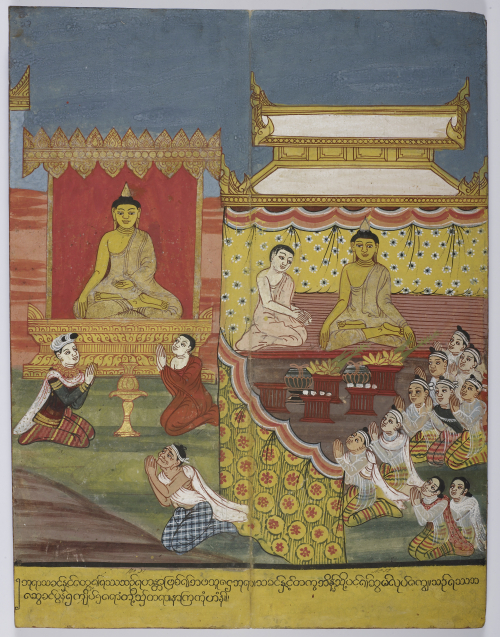 The ordination of Yasa, a son of a rich man who went to the deer park near Varanasi to become a bhikkhu (ordained male monk). Within two months a further fifty of Yasa’s friends had joined the Sangha. British Library, Or. 14297, f. 27

This Lenten season is the time for Buddhists to do meritorious deeds, and to fast and observe special precepts. Lay supporters offer robes to the monks which will be worn during Lent. They also look into the bhikkhus’ other needs. On the full moon day, the processing with offerings of robes and other gifts to the monasteries is another meritorious deed. Young people also join the procession with music troupes to celebrate the giving of offerings to the Sangha as a way of making merit. Lay communities of Buddhists come together at monasteries, and participate in the ceremony of chanting conducted by the monks. 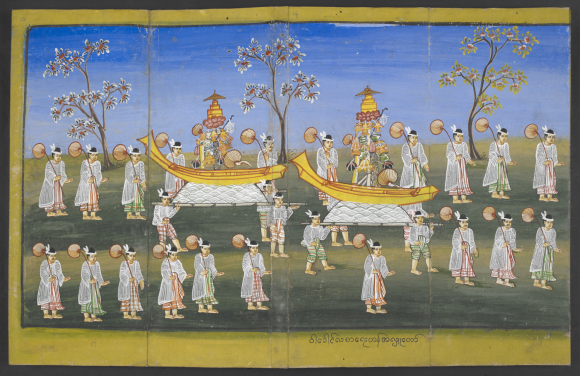 Posted by Annabel Gallop at 2:17 AM