The Iranian-American artist Pantea Karimi’s recent solo exhibition Countdown: Biruni-Galileo-Apollo at the Mercury 20 Gallery in Oakland, California, USA, was inspired by a study of several of the British Library’s scientific manuscripts which she reviewed during an extended visit in 2018. In this guest blog she speaks about this process and her work. 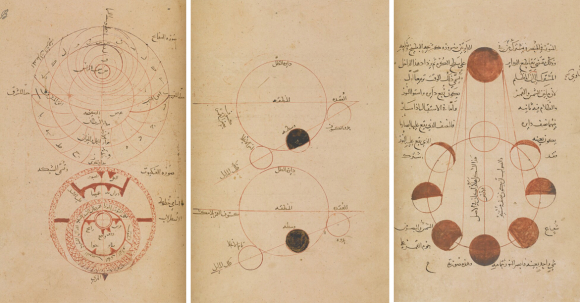 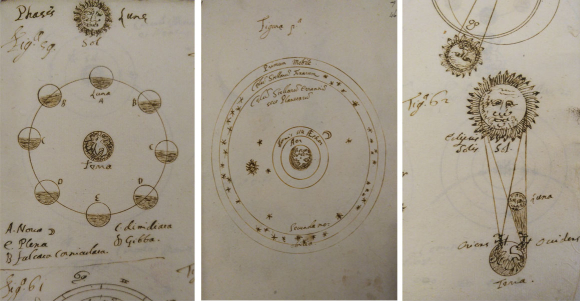 My completed works are large scale digital illustrations combining the abstract lunar diagrams with images of the Moon taken on my cell phone from a hill in California, as well as archival images from the Apollo 11 Lunar Mission in 1969. They are printed on fabric, and titled Moongraph, 01, 02, and 03. Other similarly inspired diagrams and images of the surface of the Moon have been combined with verses of Persian poetry and printed on circular pieces of metal in various sizes. They are presented in an installation on a grey geometric background that references the Moon and its phases. I believe that illustrating abstract ideas, as was done in these early diagrams, indicates how they were used as an important tool to visualize early science and pass down these ideas to later generations.

My exposure to these manuscripts from the early pioneers of astronomy has allowed my artistic interpretation of the science of astronomy. However, it was Persian poetry and its playful use of metaphor that first sparked my imagination and interest in the moon. As a child I was an avid reader of science fiction, especially Jules Verne novels translated into Persian.

The exhibition in many ways revisits my childhood obsession with the moon: from my compositions and illustrations, to the use of medieval Persian poetry that presents the moon metaphorically and symbolically. Verses by poets Attar Nishapuri, Nezami Ganjavi, and poet-scientist Omar Khayyam are included. 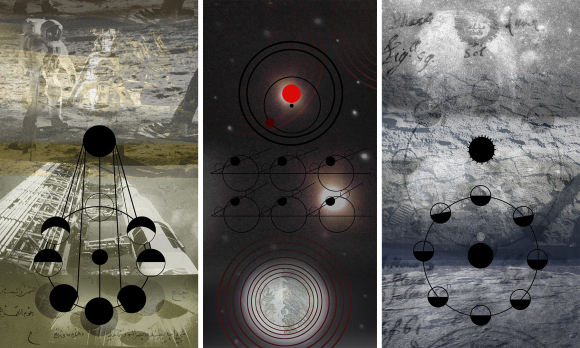 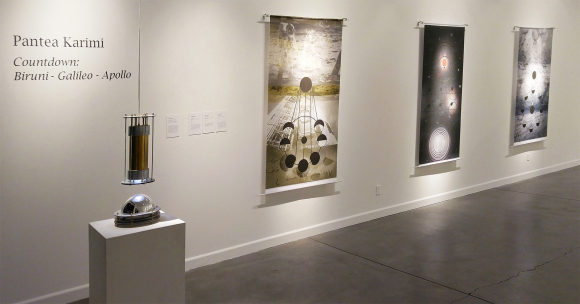 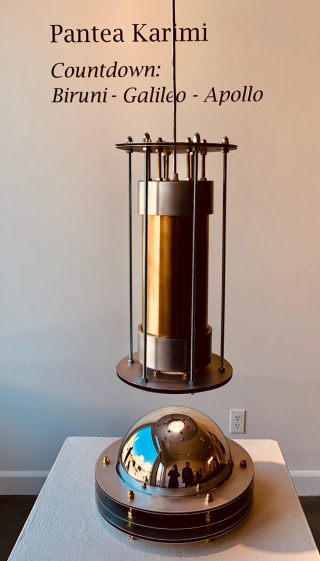 From the Earth to the Moon, 2019, dome mirror, metal disks, cylindrical pipe, screws, the moon transparency and light. After the 1865 novel by Jules Verne.

Pantea Karimi’s work as a multi-disciplinary artist centers around visual representations and textual contents in medieval Persian and Arab and early modern European scientific manuscripts in five categories: mathematics, medicinal botany, anatomy, optics/astronomy and cartography. This recent research project has further broadened her interest in the long-term exchange of knowledge across these cultures. She specifically examines how illustrations in ancient scientific manuscripts played a role in communicating knowledge, and how the broader aesthetic considerations of science were closely linked to art. Her work collectively highlights the significance of visual elements in early science and invites the viewer to observe science and its history through the process of image-making. Karimi works with interactive installations, virtual reality, silkscreen and digital prints on various substrates. She moved from Iran to the UK to study and has lived in the San Francisco Bay Area since 2005.

Countdown: Biruni-Galileo-Apollo will be exhibited in the Fall of 2019 at the Euphrat Museum of Art in De Anza College in Cupertino, California, USA.

Pantea Karimi wishes to thank the British Library and staff for the opportunity to view and study the scientific manuscripts in their care.

Posted by Annabel Gallop at 5:39 AM