Rustam: The Hero with Red Hair

Today's post comes from Dr Peyvand Firouzeh, Postdoctoral Fellow, Getty Foundation & American Council of Learned Societies at the Kunsthistorisches Institut in Florenz, Max-Planck- Institut. Peyvand has been a frequent visitor to our Reading Room during her research on the art and material culture of the Islamic world, especially early modern Iran and India.

The Shahnama (Book of Kings), was completed ca. 1010 by the poet Ferdowsi in Persian. It is the most-popularly copied, illustrated, and circulated epic that has survived in Persianate societies. One of the most frequently depicted, key protagonists of the Shahnama is the hero Rustam, known for his remarkable physical strength and, as Ferdowsi put it, ‘elephant-bodied’ (pil-tan) stature.

In manuscript illustrations, Rustam is known for specific attributes that help distinguish him immediately from others: particularly, his tiger-skin surcoat and leopard headwear, and sometimes his ox-headed mace and leopard-skin saddle. But another feature of Rustam’s appearance has remained rather neglected: his red hair. This detail caught my eye while working on a fifteenth-century manuscript of the Shahnama, Or. 1403, at the British Library. A quick look through the manuscript proved that every depiction but one shows Rustam with red facial hair. 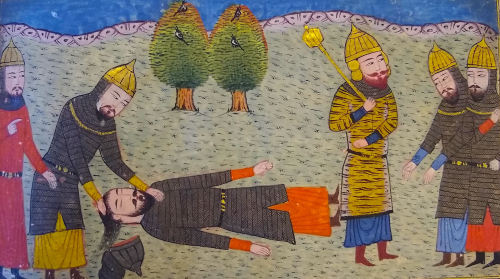 In my attempts to contextualise this feature of Rustam’s appearance, I could only find brief mentions in previous literature: observations that note Rustam’s red hair in a single manuscript (for example, Clinton and Simpson, 178), or associate it with a specific workshop (Goswamy, 25), or with certain periods – for instance the fifteenth-century (Robinson (1951), 83), or the Safavid period (Robinson (2005), 261). It has rarely been acknowledged as a widespread phenomenon (Swietochowski, 186).

Rustam’s red hair, however, crosses geographical and temporal boundaries. It is found in manuscripts attributed to Baghdad, Shiraz, Tabriz, Isfahan, Gilan, Mazandaran, and several workshops in India, starting from some of the earliest surviving illustrated manuscripts of the Shahnama in the fourteenth century. Indeed, the red hair is just as old as other iconographic features like the tiger-skin coat and leopard-skin headwear, which are thought to have emerged, respectively, in fourteenth- and fifteenth-century manuscript paintings (Robinson (2005), 253, 256, and 258). 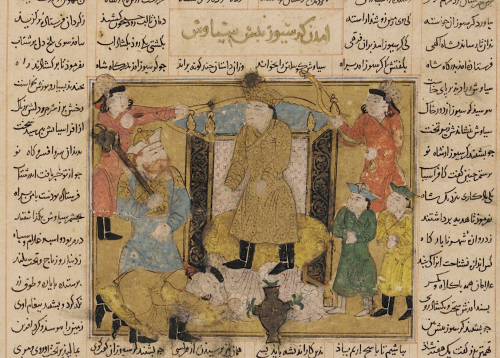 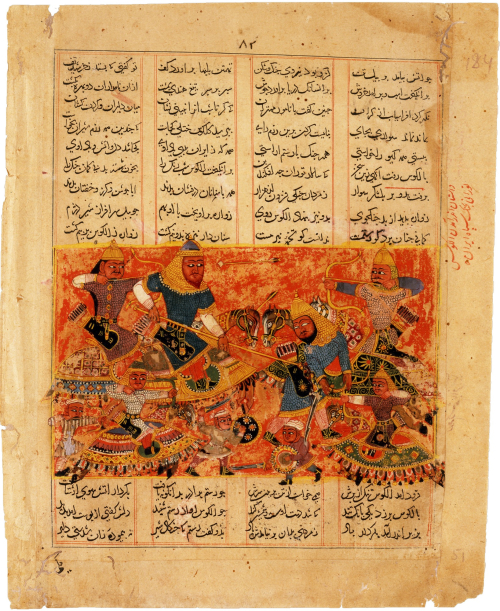 Scene from the Shahnama: Rustam Kills the Turanian Hero Alkus with his Lance. ca. 1450, India (The David Collection, Copenhagen, Inv. no. 3/1988). © Pernille Klemp 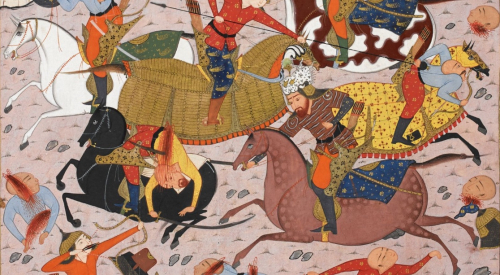 Of course, to understand the full extent of Rustam’s image as a redhead, a complete survey would be necessary. Based on the material surveyed so far, it seems that in the earliest surviving Shahnama manuscripts from the fourteenth century, the hero is predominantly depicted with red hair, though not completely consistently: this is the case in all of the four surviving Shahnamas made under the Inju dynasty (see H. 1479 , Dorn 329), one of the so-called Small Shahnamas, as well as several other Ilkhanid Shahnama paintings. The red hair features quite regularly in illustrated Shahnamas of the fifteenth century, while the ratio of the hero’s image with red hair to his total surviving depictions seems to drop increasingly from the Safavid period forward. 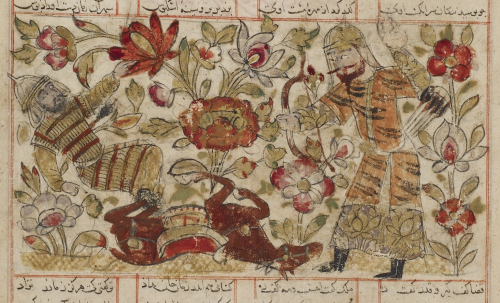 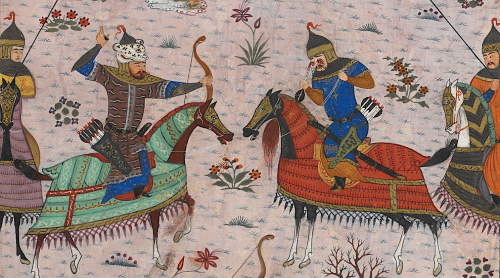 With some exceptions, there is usually a good degree of consistency throughout a single manuscript, and some of the inconsistencies could be due to later repairs and repainting. In general, there are also common scenes that eliminate the facial hair to show Rustam in his youth, or depict white hair to indicate old age.

The emergence of red hair in paintings requires more in-depth study of medieval physiognomy. Christ, too, was commonly depicted with red hair, especially in the fourteenth century. Apart from the connection with blood and bloodshed, there also seems to have been a connection between physical strength and red hair, which Robinson and Swietochowski mention in passing (Robinson (2005), 261; Swietochowski, 186). That ideas about this connection were circulating in the medieval Islamic world can, for instance, be witnessed in descriptions of the Sufi writer Shaykh Ahmad-i Jam (d.1141), who is recorded to have red hair, wine-coloured beard, tall stature, and striking physical strength, which earned him the title Zhanda-pil (Moayyad and Lewis, 8), a term used commonly by Ferdowsi to describe things, animals, and people – including Rustam – that were awe-inspiring.

Unlike the tiger-skin coat (babr-i bayan), which is mentioned by Ferdowsi in the Shahnama, and similar to the leopard headwear, it has been noted in passing that there is no indication of Rustam’s red hair in the text of the Shahnama (Swietochowski, 186). This seems to be the case for most copies. However, in some versions of the epic, there are two lines that do note Rustam’s red hair, and raise interesting questions about the relationship between text and image. The lines occur in the section on the birth of Rustam where Rudaba, Rustam’s mother, had to have a caesarean to deliver the immense baby. The lines in question are among the first that describe Rustam at the moment of birth, bringing together metaphors of light, blood, and the colour red: 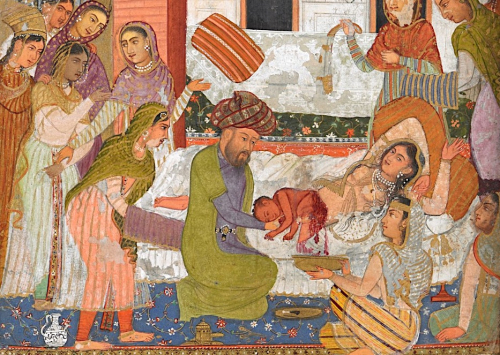 Interestingly, the authenticity of these two lines has been questioned. Djalal Khaleghi-Motlagh leaves them out (Khaleghi-Motlagh, vol.I, 267-8), while Dabir Siyaqi includes them in the main text (Dabir Siyaqi, 136), and Ashtiani and others record them in footnotes (Khalifeh, vol.I, 213). I have not yet come across any illustrated manuscripts – even those depicting Rustam with red hair – which include these lines. Yet, the existence of these verses attests that at some or multiple points there was a written – and perhaps oral – dimension to such iconography.

Explaining this disparity between text and image requires more in-depth research into the iconography and textual variations of the Shahnama. Whether the text predates or was inspired by the image remains unclear for the time being, but two preliminary points can be mentioned here.

First, it is possible that earlier texts, images, and oral traditions that have not survived led to the choice of this iconography for Rustam. There is both textual and visual evidence for the transmission of the legends of Rustam dating back to the eighth and ninth centuries, before the completion of the Shahnama by Ferdowsi in the eleventh century (Eighth and ninth century versions of the Rustam cycle and Sims-Williams & Sims-Williams (2015), 252-254). Moreover, several depictions of Shahnama scenes on pre-1300 objects and architecture attest to the transmission of the hero’s visualisations prior to the earliest illustrated Shahnama manuscripts that have reached us.

But there is no reason to assume that images of the Shahnama were strictly dependant on texts, either of Ferdowsi’s Shahnama or related legends. Images of a hero like Rustam – like many other people and narratives in the Shahnama – were popular beyond the medium of the book and had a life of their own. Visual traditions of the Shahnama offer multiple examples of artists who took the liberty to depict extra-textual details. Another way to explain the text-image disparity in the case of Rustam is the possibility that his image as a redhead came first, and subsequently found its way into written traditions, either directly or by way of oral traditions. If so, this could be an interesting case where the pictorial, verbal and textual forms of the Shahnama converge on a single figure, and the former informs the latter.

My sincere thanks to Rachel Parikh and Charles Melville for their help with this blog post.

Goswamy, B. N. A Jainesque Sultanate Shahnama and the Context of pre-Mughal Painting . Zürich: Museum Rietberg, 1988.

Sims-Williams, Nicholas and Ursula. “Rustam and his zīn-i palang.” In: From Aṣl to Zāʼid: Essays in Honour of Éva M. Jeremiaś, edited by I. Szánto, 249-58. Piliscsaba: Avicenna Institute of Middle Eastern Studies, 2015.