Suanplu Chorus from Thailand performs at the British Library

This week the British Library welcomed the world-renowned Suanplu Chorus from Thailand, which performed traditional and contemporary songs that present the beauty of Thai culture expressed through vibrant vocal techniques. The special free lunchtime concert that took place at the British Library on 9 July 2019 was organized in collaboration with the Royal Thai Embassy in London. The 38 singers harmonised beautifully, and the stunning acoustics of the Library’s foyer brought out the best in their vocals. The Suanplu Chorus came to the British Library fresh from their triumph at the Llangollen International Musical Eisteddfod 2019 in Wales, where on 6 July 2019 they had won the First Award in the Open Choirs category. 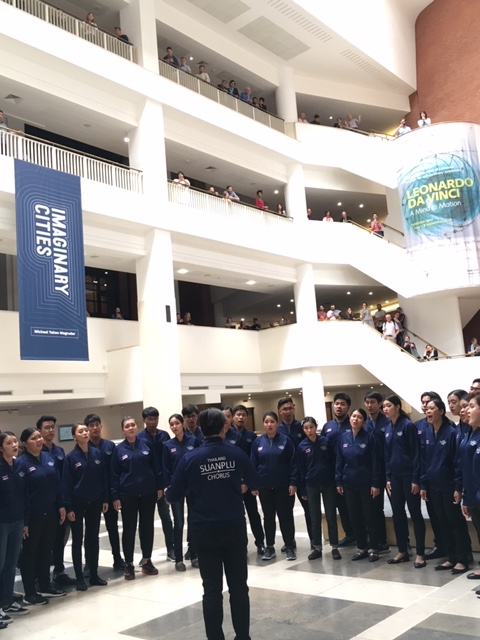 The Suanplu Chorus from Thailand in concert at the British Library on 9 July 2019, attracting enthusiastic applause from the many visitors in the Library’s foyer, and even enticing many readers out of the reading rooms and onto the surrounding balconies.

Formally established in 2000 by Thai National Artist Dusdi Banomyong, Suanplu Chorus has been a pioneer of combining the beauty of Thai music with Western choral traditions. Their repertoire ranges from classical, contemporary and traditional Thai songs to original compositions written for them. At the British Library, the eclectic programme started with a superb performance of the Gloria by Joshua Himes, sung in Latin, followed by popular musical hits and American gospel songs before moving on to a wide range of Thai classical and folk songs. 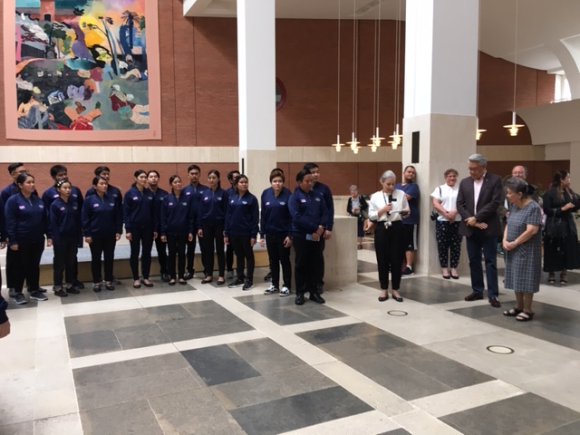 Dr Luisa Mengoni, Head of Asian and African Collections, thanked HE Pisanu Suvanajata, Ambassador of Thailand to the UK, and National Artist Dusdi Banomyong, founder of Suanplu Chorus, for making this concert possible through their support and dedication.

The concert cemented yet further the long-standing good relationship that the Library has enjoyed with Thailand for over four decades. The British Library hosted visits by Her Royal Highness Princess Sirindhorn in 1991 and 2005, as well as visits by delegations from the Thai Library Association, the Office of the Ombudsman Thailand, SEAMEO SPAFA and from various Thai universities. In 1996, to mark the Golden Jubilee of His Majesty King Bhumiphol, and the state visit to Thailand of Her Majesty Queen Elizabeth II, a British Library exhibition of Thai manuscripts and early printed works travelled to Bangkok under the auspices of the British Council, and was exhibited for two months at the Thailand Cultural Centre in Bangkok.

Rich collections relating to Thai music are held in the British Library’s Sound and Moving Image Archive. These encompass nearly 2000 recordings from Thailand including the John Moore music collection, classical music, folk and pop music, recordings of religious ceremonies and Tom Vater’s field recordings. There are also recordings of wildlife, documentary films and Thai feature films. These resources are accessible through the Sound Archive catalogue. 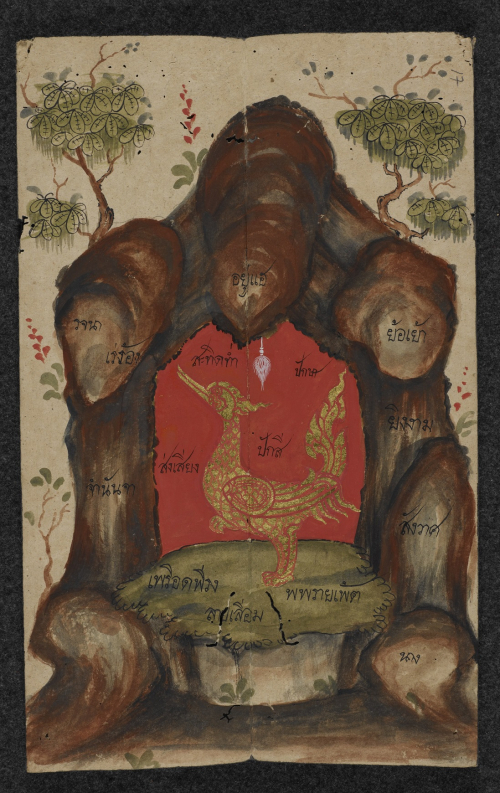 The Library’s Thai collection consists of approximately 400 manuscripts in Thai, Northern Thai and Pali languages. Most of the manuscripts are paper folding books and palm leaf manuscripts, but there are also some textiles and wooden manuscript boxes and cabinets. The Library also holds more than 5000 printed books and periodicals in Thai language, dating from the mid-19th century onwards (mostly searchable in the Library’s online catalogue Explore). The earliest period of Thai printing, from ca.1840-1890, is well represented due to a gift by Christian missionaries of about 100 books and pamphlets, some of which are unique copies including the only known copy of the first Thai book ever printed in Thailand, a Christian text published in 1838 (ORB.30/894). 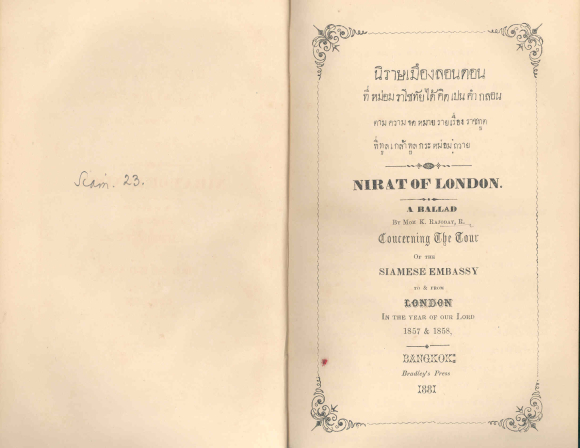 ‘Nirat of London, a Ballad Concerning the Tour of the Siamese Embassy to and from London in the Year of Our Lord 1857 and 1858’ by Mom K. Rajoday (in Thai). Published in Bangkok, Bradley’s Press, 1881. British Library, Siam.23

A selection of the finest and most important Buddhist manuscripts and printed Buddhist scriptures from Thailand will feature in the upcoming Buddhism exhibition at the British Library (25 October 2019-23 February 2020), which will be accompanied by a full programme of cultural events.

A Thai folding book containing extracts from the Buddhist canon and the legend of Phra Malai. Depicted are devata, deities residing in the Buddhist heavens. Central Thailand, 19th century. British Library, Or. 14115

Further reading on the Thai collection in the British Library

Posted by Annabel Gallop at 7:07 PM