Todays guest blogger is Borna Izadpanah, PhD Candidate, University of Reading. Borna is a typeface designer and researcher based in London. He is currently a PhD candidate at the Department of Typography & Graphic Communication, University of Reading working on the history of typographic representation of the Persian language. 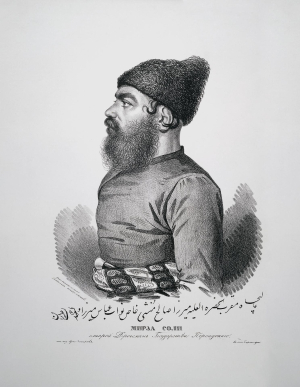 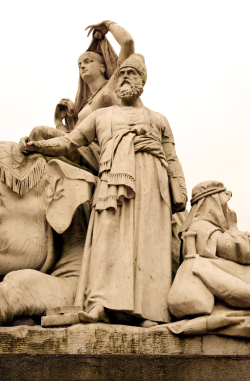 In 1837, the first Iranian newspaper was published in Tehran by Mīrzā Muḥammad Ṣāliḥ Shīrāzī, one of five students dispatched to England under the patronage of the crown prince ʻAbbās Mīrzā with the mission to acquire a knowledge of modern European sciences. Mīrzā Ṣāliḥ kept a journal of his time in England that lasted from 1815 to 1819, a manuscript of which is currently held at the British Library (BL Add. 24,034).

Mīrzā Ṣāliḥ’s journal reveals significant information regarding his interest in the ‘art of printing’, which led him to an apprenticeship under an English printer and typefounder (most likely Richard Watts). He also recorded an account of his encounter with newspapers in London. Mīrzā Ṣāliḥ translated the word newspaper into Kāghaz-i akhbār [literary news-paper]. Perhaps, for this reason, Kāghaz-i akhbār (and often Akhbār-i vaqāyiʿ [news of events]) is used in most sources to refer to his untitled newspaper. 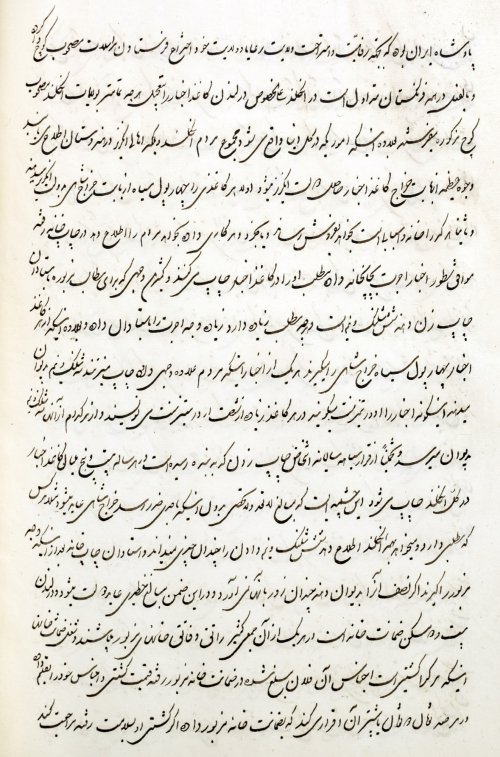 Before his return to Iran in 1819, Mīrzā Ṣāliḥ, with the help of Richard Watts, purchased a typographic press to be shipped to Iran. Later he established a lithographic press in Tabriz, with a press and equipment that were imported from Russia. A single copy of the first publication from the latter press, a lithographed Qurʼān (Ramaḍān 1249/1834), has only recently come to light and is now preserved at the Majlis Library in Tehran. 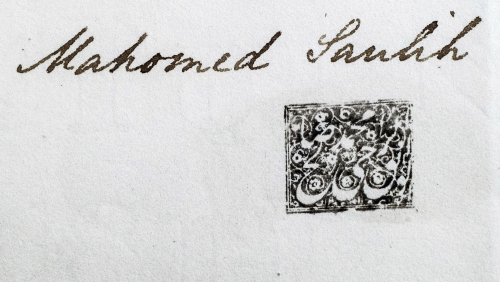 A few years later, Mīrzā Ṣāliḥ published a newspaper in Tehran under the royal decree of Muḥammad Shāh Qājār. Initially a lithographed Ṭalīʿa [pre-publication advice] of this newspaper appeared between 29 December 1836 and 8 January 1837. In 1945, the Persian journal Yādigār published the entire content of the Ṭalīʿa, the only known copy of which was reportedly in the possession of Ḥāj Muḥammad Āqā Nakhjavānī. According to this Ṭalīʿa, one of the main missions of this monthly newspaper was to educate and inform the residents of the mamālik-i maḥrūsa-i īrān [the guarded domain of Iran] about the news of the Eastern and Western nations. This newspaper was to be distributed to different parts of the country (See Yādigār, 1945).

In 1839, the Journal of the Royal Asiatic Society published an article entitled ‘Persian newspaper and translation’ in which the entire content of Kāghaz-i Akhbār from Muḥarram 1253 (7 April - 6 May 1837) was printed with movable type followed by an English translation. This article also provided a brief description of the newspaper and its editor: ‘lithographed and printed at Tehran … under the editorship of Mirza Salih, one of the public secretaries of H. M. the Shah of Persia … two large folios, printed on one side only; it is closely written in a plain hand, and is surmounted by the Persian emblem of the Lion and Sun’ (JRAS, 1839, p. 355). Unfortunately no copy of this newspaper survives today in the archive of the Royal Asiatic Society in London. 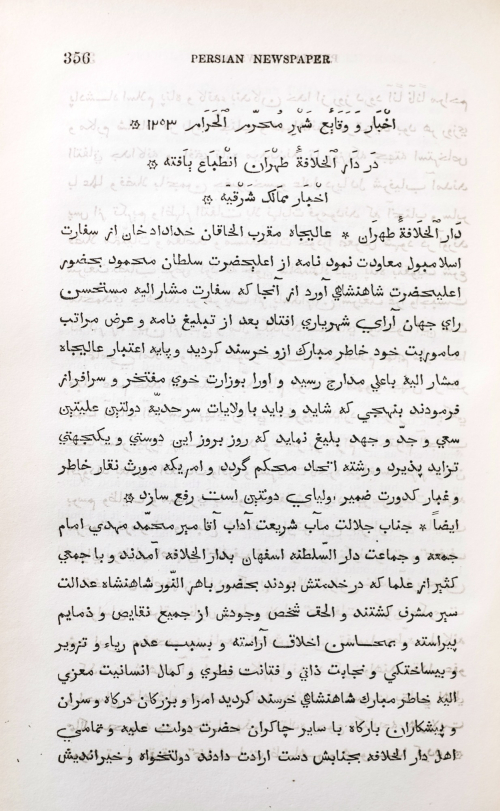 Also, in 1839, Richard Wilbraham in his Travels in the Trans-Caucasian Provinces of Russia reported that ‘a lithographic press has been established of late year in Tehran … within the past year a newspaper has been printed in the capital’ (Wilbraham, 1839, p. 46).

Perhaps the first Persian source that mentioned an existing copy of the Kāghaz-i akhbār was an article entitled ‘Gāzit-i āntīka-yi īrān’ [antique Iranian gazette] in the Persian newspaper Akhtar, printed in Istanbul in 1876. According to this report, an ‘Iranian merchant’, had provided Akhtar with an imperfect copy (lacking the first page) of ‘an antique Iranian gazette’ from approximately 40 years earlier, which contained news of foreign nations including Russia, Turkey, Egypt, Spain, England, and France (See Akhtar, 1876, pp. 2–3).

Finally, in 1968, the leading Iranian newspaper Kayhān for the first time published a rather unclear ‘picture of the first and oldest Iranian newspaper’. According to Kayhān, the Iranian scholar Hamīd Mowlānā was granted permission to photograph this ‘unique copy’ of Kāghaz-i akhbār at the British Museum (Kayhān, 1968). In the following year, a clearer reproduction of the front page of a British Museum copy of Kāghaz-i akhbār (Jumādá al-Ūlá 1253/3 August 1837 - 1 September 1837) appeared in the first published edition of Mīrzā Ṣāliḥ’s travelogue, as ‘the only extant copy of the newspaper’ (See Rāʼīn, 1969, p. 27). In fact, this was perhaps the first time that a reproduction of an issue of Kāghaz-i akhbār, which was previously only known through secondary sources, was published. 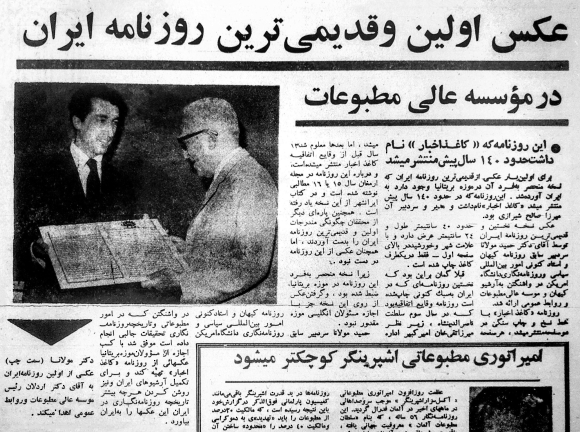 With regard to the ‘discovery’ of the Kāghaz-i akhbār at the British Museum there are some conflicting statements. Hamīd Mowlānā later claimed to have ‘discovered’ two copies of the Kāghaz-i akhbār at the British Museum in 1963 (Mowlānā, 1979, p. 15). However, in his PhD thesis –submitted in the same year– Mowlānā writes that ‘today, unfortunately no copy of Akhbar Vaghayeh is extant’ (Mowlānā, 1963, p. 200). Moreover, the only copy of Kāghaz-i akhbār that appears in Mowlānā’s studies, and seemingly all the subsequent studies of this newspaper, is the same issue from Jumādá al-Ūlá; no visual representation of the second issue of Kāghaz-i akhbār seem to have appeared in any publication to this day. 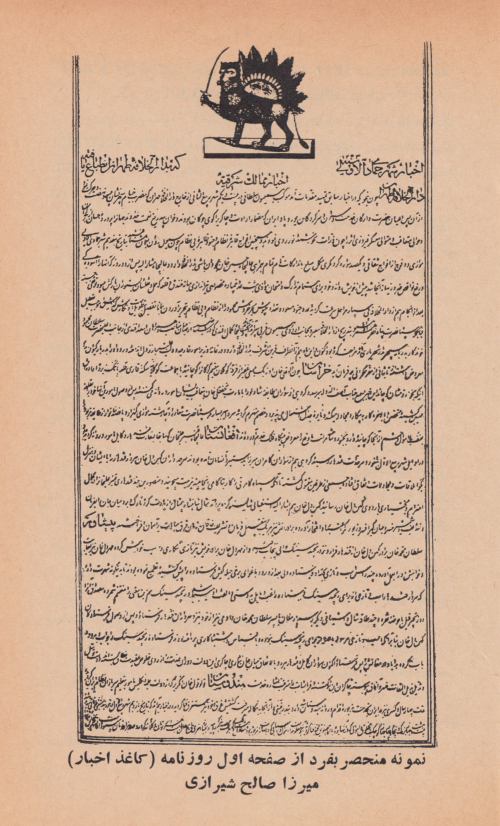 In recent years I have tried to trace the cited copies of the Kāghaz-i akhbār in order to study their printing quality and other aspects of their production which could not be deduced from the existing reproductions. According to my investigation, no archive or library catalogue bears any record of an extant copy of Kāghaz-i akhbār –apart from a microfilm at British Library (Or.Mic.4776) which proves that the British Museum at some point possessed two copies of this newspaper. However, I was unable to find a shelfmark or any reference concerning the current location of these two issues. Thus, this led to the assumption that these copies had been lost or even destroyed.

Ultimately, however, and thanks to Dr Goel Cohen who drew my attention to the studies of another Iranian scholar Alī Mushīrī, I was able to locate the copies of the newspaper, which had been moved from the British Museum to the British Library. This investigation led me to the shelfmark O.P. 3 (13), cited in two Persian articles by Alī Mushīrī (Mushīrī, 1963 & 1964) which are probably the earliest sources to introduce the British Museum copies although they did not actually include any visual representation of Kāghaz-i akhbār.

This post is notably perhaps the first report in which the both known copies of the Kāghaz-i akhbār are shown – particularly in their present condition. They were inserted into a large anonymous volume containing miscellaneous newspapers in Arabic, Armenian, Hebrew, Turkish, Sinhala, Japanese, etc. The two issues are from Rabīʿ al-Thānī 1253 (5 July 1837 - 2 August 1837) and Jumādá al-Ūlá 1253 (3 August 1837 - 1 September 1837). They are completely intact and have been layered by Japanese tissue paper that has stiffened the original paper. This, however, has also desaturated the black printing ink which only appears on one side of the paper. 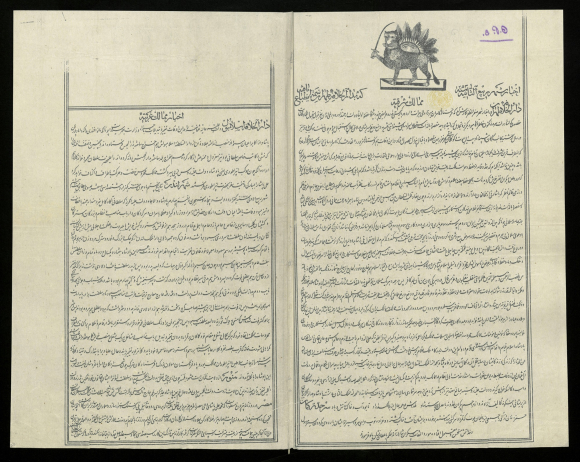 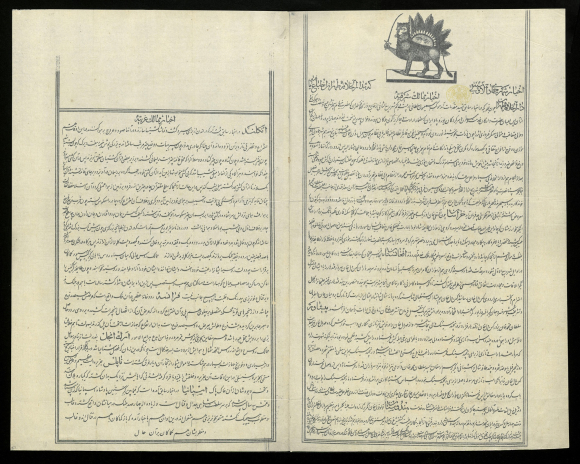 The illustration of the emblem of Iran Shīr va khurshīd [Lion and Sun] with minor variations appears on both issues. The main headline, which is written in riqaʻ style, reads ‘news of the month of … of the year … that was printed in Dār al-khilāfa [the abode of the caliphate] of Tehran’. As what seems to be a general rule, the right-hand folio contains the ‘news of the Eastern nations’ and the left-hand folio contains the ‘news of the Western nations.’ The main text is written in an elegant nastaʻlīq hand, with the name of cities and countries highlighted in riqaʻ style. The approximate size of a single page is 42 in 27 centimetres. 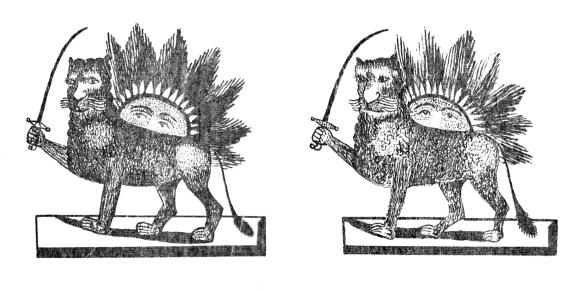 Some Persian sources have stated that these issues of Kāghaz-i akhbār were sent to the British Museum by an employee of the British legation in Tehran since they contained the news of the death of the King William IV and the coronation of the Queen Victoria (this is reflected in the Rabīʿ al-Thānī issue). Alī Mushīrī mentions a certain ‘Charles Sundt’ as the person responsible for sending the papers to England (Mushīrī, 1964, p. 609). I have not been able to find anyone fitting that description, but, it is possible that the person in question, whose name might have been misspelled in the Persian transliteration, is Charles Stuart, the secretary to the British Envoy to Persia, and the author of Journal of a residence in northern Persia and the adjacent provinces of Turkey .