Today’s guest blogger is Komal Pande, who was the Charles Wallace Trust Fellow at the British Library from February to May 2019. Komal is also the Assistant Curator for Numismatics and Epigraphy at the National Museum in New Delhi.

As part of my research fellowship in the Visual Arts section, I had the opportunity to research and arrange as a set of hand-drawn Modi letters. Modi, is the vernacular script used to write the Marathi language spoken predominantly in Maharashtra, India. The Peshwas, the ruling class of the Maratha empire from the mid-17th to early 19th centuries, used Modi script for administrative purposes ‘as preserved in the many parcels (rumals) of official documents in the Maharashtra State Archives in Mumbai’. Marathi merchants also used the script for their business transactions. In 1917, Modi was replaced with Devanagari. Since few people can read Modi, these hand-drawn letters are important to India’s vernacular cultural past. The orientalist Sir Charles Wilkins (1749-1836) prepared this set of Modi letters in the early 1800s. 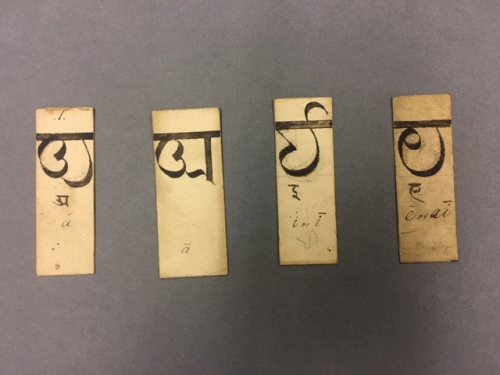 Cards with the Modi script for vowels, British Libary, Foster 5702

Wilkins, an employee of the East India Company, was assigned as the superintendent of the Company’s factories in Malda (western Bengal) from 1770. Wilkins studied a range of languages and became proficient in Sanskrit, Bengali and Persian. Based on his expertise and knowledge of Bengali, the Governor-General of Bengal, Warren Hastings commissioned Wilkins ‘to undertake a set of Bengal types’. Wilkins manufactured a set of metal printing founts or typefaces, that could be used to mechanical print the Bengali language as exemplified in Nathanial Halhed’s instructional volume, A Grammar of the Bengal Language (Hoogly, 1778). Wilkins returned to England in 1786.

The set of sixty-nine hand-drawn Modi letters was prepared after Wilkins returned to England. According to Graham Shaw (formerly, Head of Asian and African Collections, British Library), ‘they may well be associated with [Wilkins] connection to the East India Company’s Haileybury College from 1805, perhaps to be used in printing text-books for the Company’s new recruits to learn the Modi script’.

Each card features one Modi letter: its transliteration in English and Hindi written below it, making the cards bi or trilingual. A card may contain vowels or consonants, along with some variations of half, conjunct and compound consonants. While each card measures approximately 75 x 25mm,  slight variations can be noticed in width of these cards. While the vowels and consonants are of similar size, the half letter cards are written on narrower pieces of card. The cards for the compound consonants are broader to accommodate the form and clarity of the fount. 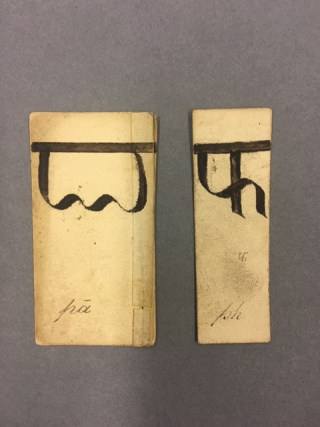 An example, showing the difference in the width of the cards, British Library, Foster 5702.

The letters are written in black ink. The calligraphy on these cards is particularly intriguing as its purpose is more utilitarian than ornamental. The stylization of these letters was created to understand the fount in three dimensions, as these cards were prepared as functional typeface that had the potential to be used for creating matrices and punches.

Interestingly, the set also includes some blank, unfinished and cancelled cards. These cards are as important as the complete cards, as they elucidate Wilkins’ method of scribing. On the card, the pencil rules were drawn in the upper centre creating a space for the Modi letter. Since the card was to be bi or trilingual, keeping Modi as the prime script, a Modi letter of 35x25 mm dimensions was drawn in pencil. Once the form of the letter was decided, the outline was made in ink and its transliterations was scribed under the letter. Finally, the outlines of the letter were filled in black ink giving it dimension and volume. Most of the complete cards show, voluminous Modi letter in the centre along with its transliteration in small Devanagari and Roman scripts for the purpose of identification of each letter.

Alongside the process of scribing, it is equally interesting to study the method of corrections carried out by Wilkins. A few of the cards in the set show the process of how the corrections were made on the inscribed Modi letters. These include correcting the form of the letters and reflect how the three dimensionality of the letter was rectified by adjusting angles and curves by scraping off all imperfections. The cancelled signs, the scalpel marks and the pencil ruled lines inform us of Wilkins’ efforts to achieve perfect typefaces.

According to Graham Shaw, ‘as far as it is known, no work was ever printed using a Wilkins Modi fount. When James Robert Ballantyne published his A grammar of the Mahratta language’ in Edinburgh in 1839 (for use at Haileybury), he noted in the preface “The lithographic press has been employed because no fount of Mahratta [i.e. Modi] types was to be found in London”. The only other early Modi fount cast was at the Serampore Mission Press in Bengal, used in 1808 to print the second edition of the Baptist Missionary William Carey’s A grammar of the Mahratta language’ (after criticism for the use of the Devanagari script in the 1805 first edition.’

With thanks to Graham Shaw for his invaluable comments for this blog post.