‘Bold script of wildness and beauty’ is Jan Just Witkam's evocative description of the calligraphy of a manuscript from Daghistan in the collection of Leiden University Library (Cod.Or. 11964), a characterisation which seems supremely well suited for a product of this mountainous and fiercely proud region in the Caucasus mountains. Today, Dagestan is a republic located in the Russian Federation, bounded to the east by the Caspian sea and to the south by Azerbaijan and Georgia, and  home to a rich and distinctive manuscript culture.  The British Library holds a small collection of ten Qur’an manuscripts from Daghistan, and in this blog each manuscript will be pictured to illustrate some of the many distinctive features of this impressive but little-known manuscript tradition. 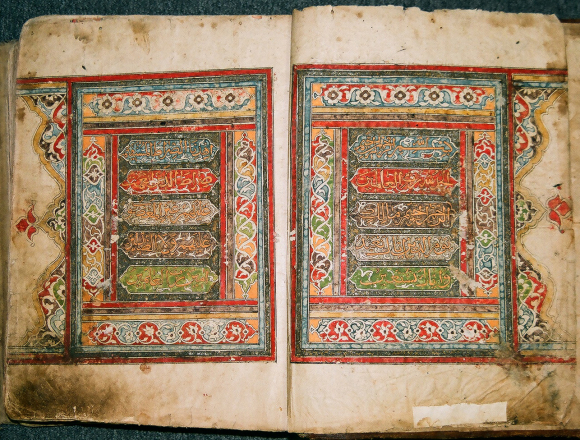 The most immediately striking feature of Daghistani manuscript illumination is the vibrant palette of red, yellow, green, purple and brown, which contrasts strongly with the predominantly blue and gold nexus of the Ottoman and Indo-Persianate manuscript traditions to the south. There is considerable variation in the architecture of decorated frames, perhaps relating to sub-regional origin or some other underlying classificatory structure: in a significant proportion of manuscripts rectangular frames are extended horizontally into the outer margins (see above), while in other manuscripts, double headpieces predominate. Characteristic motifs include double/triple scrolls and concave diamond-shaped lozenges, and the presence of ‘eyelets’ within these motifs. 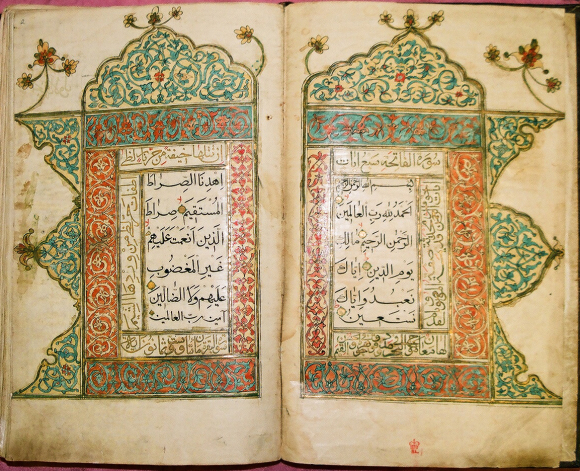 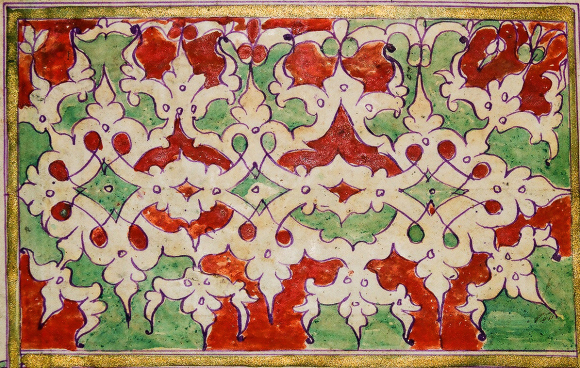 Detail of characteristically Daghistani decorative motifs with concave diamond-shaped lozenges studded with ‘eyelets’, from the initial double illuminated frames of a Qur'an shown below. British Library, Or 15955, f. 5r (detail)

When surah headings are set in decorated rectangular panels, these may also be extended horizontally into the outer margin with a palmette or other ornamental device.  An especially distinctive and rare feature of Daghistani manuscripts is that the petalled floral verse markers are often stamped in black ink, and then hand-coloured.

Heading for Surat al-Mulk extending vertically into the margin with a decorative finial, adjoining a marginal ornament for the start of the 29th juz'; note also the stamped verse markers in black ink, coloured in with red and yellow. Qur’an, Daghistan, ca. 1800. British Library, Or. 15913, f. 258r 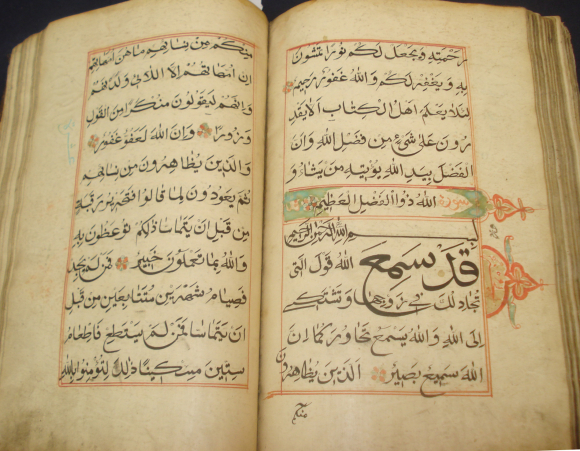 Heading for Surah al-Mujadilah extended into the margin, with below it an ornamental marker for the start of the 28th juz’. Qur’an, Daghistan, 19th century. British Library, Or. 16771 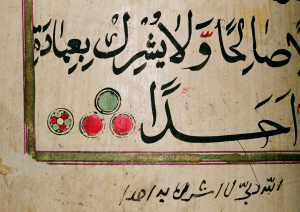 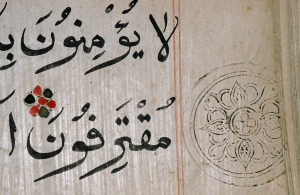 Confirming Witkam's characterisation of Daghistani calligraphy, the Qur’anic text is generally written in a large, bold, confident and widely-spaced hand, tending towards the monumental. In Daghistani Qur’ans, the index of artistry is clearly the calibre of the calligraphy rather than the decoration, but perhaps the most unusual feature is the sense of scribal bravado or even swagger.  Elements of the text of a Qur’an traditionally highlighted calligraphically, such as the marginal annotations, or the first few words of a juz’ or beginning of a surah, are often approached with gusto. The letter ta’ marbuta is often presented decoratively as a knot surmounted by a bud.   The calligraphic treatment applied to certain words, such as the exuberant ‘amma at the start of the final juz’ of the Qur’an, or the elan of the presentation of ‘mysterious letters’ like the ha-mim, bespeak an individualism not normally associated with Qur’an manuscripts, and to an extent not encountered in any other known Qur’anic tradition.  Contrasting with the big bold Qur’anic text, catchwords and other paratextual notes are generally written in a very distinctive small cursive hand with overlining, with a pronounced slope to the right, associated with Daghistani manuscripts in the Avar language as well as Arabic. 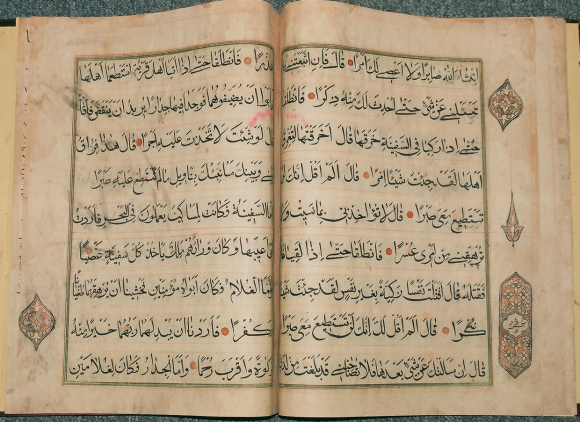 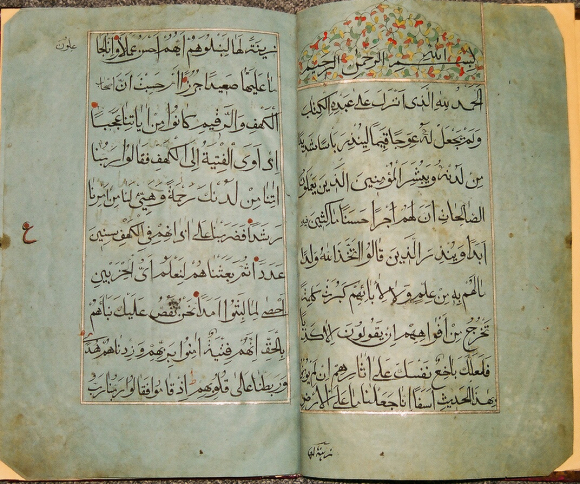 Qur’an, on blue paper, Daghistan, 19th century. Note the catchwords written in a small sloping cursive hand with overlining at the bottom of the right-hand page. Or. 16760, ff. 1v-2r.

In many schools of Qur’anic manuscript art, the layout and divisions of the Qur’anic text tend to adhere to longstanding regional preferences.  In Daghistani Qur’ans, especially those with illuminated frames, the Surat al-Fatihah usually occupies the whole of the first two facing pages. This is in striking contrast to many other traditions, including the Ottoman and Southeast Asian world, where Surat al-Fatihah usually occupies a right-hand page, with the beginning of Surat al-Baqarah on the left.  When decorated frames occur in the middle of a Daghistani Qur'an, they invariably mark the start  of Surat Maryam, and the several manuscripts in the British Library of Daghistani Qur’ans produced in two volumes are also divided at the start of Surat Maryam. 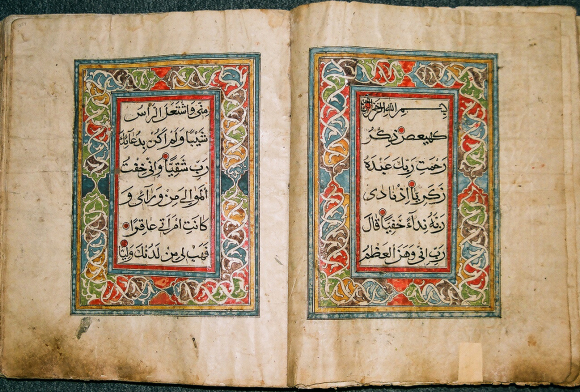 The start of Surat Maryam, with exhuberant calligraphic treatment of the 'mysterious letters', at the beginning of the second volume of a two-volume Qur’an, Daghistan, 19th century. Or. 16595, ff. 1v-2r 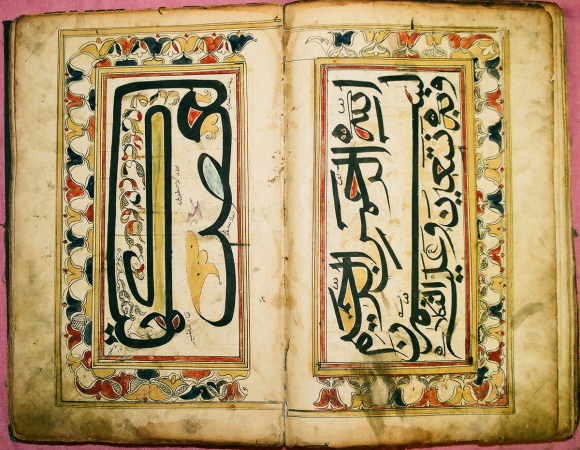 Another highly characteristic feature of many Daghistani Qur’ans is the addition of a pious phrase at the end of the first surah, al-Fatihah, the word amin or a longer phrase such as amin ya rabb al-‘alamin may be inscribed, and especially after the final word of the Qur’anic text, al-nas, when the words of praise Allahu akbar are frequently added.  While it is not unknown to find the addition of amin at the end of Surat al-Fatihah in Qur'an manuscripts worldwide, the longer phrases are rarely encountered. 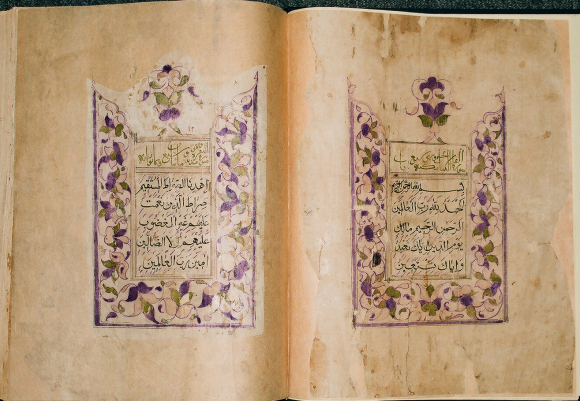 The divisions of the text into Qur’an into thirty parts of equal length (juz’, plural ajza’), and sub-divisions thereof, is an important navigational aid in Qur’an manuscripts all over the Islamic world, especially since manuscript Qur’ans generally did not bear page, surah or verse numbers.  Most Daghistani Qur’ans bear marginal ornaments marking each juz’, with further ornaments for half (nisf), quarter (rub‘) and eighths (thumn) of each juz’. Other marginal annotations, commonly found in many Qur’ans, are the letter ‘ayn to indicate ruku’ or places for genuflection, and the word sajdah, indicating places for prostration.  But so far unique to Daghistani Qur’ans appears to be the marginal annotation wird, which perhaps might be understood to mark specific portions of the Qur’an for devotional recitation associated with Sufism. 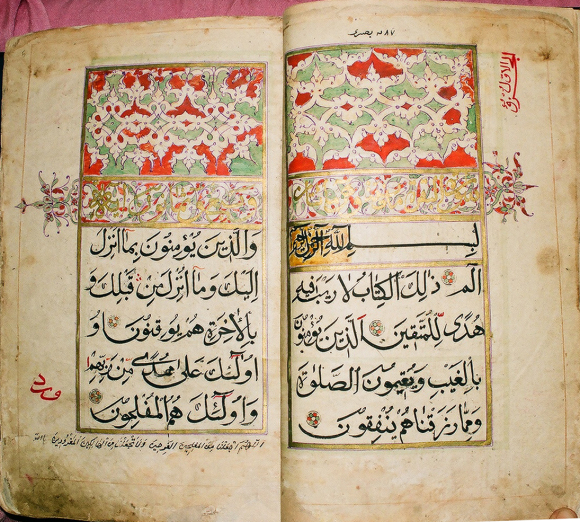 Beginning of Surat al-Baqarah, annotated in the margin al-juz’ al-awwal, and with the ornamental surah heading extending horizontally in the margin. Note the strong, bold script of the Qur’anic text, contrasting with the characteristic small backward-sloping cursive hand of the note at the bottom of the left-hand page. The marginal annotation in red on the left-hand page reads wird. The illuminated panel at the top of each page includes typically Daghistani motifs with ‘eyelets’. Qur’an, Daghistan, ca. 19th century. British Library, Or. 15955, ff. 4v-5r

Many of these Daghistani Qur’ans are large manuscripts, written on burnished paper of Russian manufacture, as evidenced in watermarks or embossed factory stamps. Bindings are usually plain and relatively ‘rustic’ in appearance, of dark brown leather without envelope flaps. Simple tooled frame lines are often joined by straight lines along the horizontal, vertical and diagonal axes, with stamped corner pieces and central medallions.  Particularly characteristic is the frequent use of small circular stamps along the ruled axes.

Two major programmes are currently digitising manuscripts in Dagestan: the Factum Foundation has been working with the Institute of History, Archaeology and Ethnography (IHAE) in Makhachkala, the capital of Dagestan, to digitise the manuscript collections held in the IHAE, while a British Library Endangered Archives Programme project 'Digitising Dagestan's Manuscript Heritage: Manuscripts from the Library of 'Alī al-Ghumūqī (1878-1943)' is currently underway (EAP957).

Blog: From Caucasia, not from Southeast Asia: Daghistani Qur'ans with spurious colophons