This is the fifth of a series of blog posts looking forward to the British Library exhibition on Buddhism, 25 Oct 2019 – 23 Feb 2020

One of the distinctive features of the Mahayana (Eng: Great vehicle; Chi: 大乘) school of Buddhism is the emphasis on practising the compassion of bodhisattvas and acting for the benefit of not only individual but all sentient beings. One popular type of practice that embraces other sentient beings is that of offering food. The prime reason for offering food is to extend Dharma teachings to hungry beings while providing them with meals and releasing them from their suffering. As a result they can connect with the Dharma and be reborn in a better realm. This blog post will look at four items held in the British Library that are related to one of the most popular food offering services: the Yogacara Food Offering Service.

The Yogacara Offering Service or Yogacara Burning-Mouth Service (Chi: 瑜伽焰口法會) is a Dharma service that offers food to beings in the hungry ghost realm (Chi: 餓鬼). Yogacara (Skt: Yogācāra; Chi: 瑜伽) is the name of a school of Buddhism and was interpreted by Master Deji (Chi: 德基大師) in the Qing Dynasty (1644-1911) as “the forming of gestures (mudra), together with the chanting of dharanis and mantras, and the mind in contemplation. When the body, mouth and mind connect, it is the Yogacara.” Burning-Mouth describes the appearance of the hungry ghost. According to the book Faxiang by the Venerable Tzu Chuang, there are ten negative behaviours that lead a being to be reborn as a hungry ghost: minor acts of negative physical, verbal, and mental karma, having many desires, having an ill-intentioned desire, jealousy, holding wrong views, dying while still attached to the necessities of life, dying from hunger, and dying from thirst. Negative karma furthermore results in three ways that hungry ghosts becomes unable to take food: water transforms into blood which they cannot consume; their narrow throats and burning-mouths prevent swallowing; and anything they try to eat will turn into charcoal. Only by relying on the Dharma (or ending the cycle of suffering) can these beings be rescued and leave the realm. 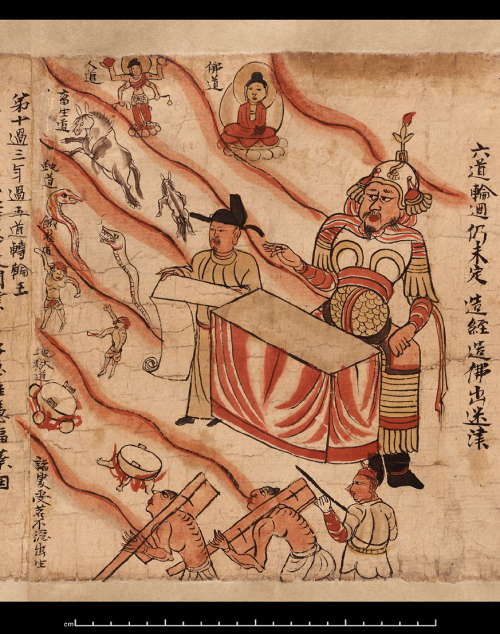 The Sutra of Ten Kings showing different realms a sentient being can be reborn into, including the Hungry Ghost Realm (5th path from the right) (BL Or.8210/S.3961)

The origin of the offering can be traced back to the Dharani Sutra for Saving the Burning-Mouth Hungry Ghosts (Skt: Pretamukhāgnivālāyaśarakāra-dhāraṇī; Chi: 佛說救拔焰口餓鬼陀羅尼經). One day, Ananda, one of the Buddha’s ten great disciples, was studying until late at night. Suddenly, a horrifying ghost named burning mouth (Chi: 焰口) appeared and said to Ananda: “You will die in three days and will fall into the realm of hungry ghost.” The ghost was extremely hideous – his body was emaciated, in his mouth burned a hot and foul-smelling fire, his neck was thin as a needle, his hair was messy, and he had claws that were long and sharp. Ananda asked the ghost how he could escape from this suffering. The ghost said: “You need to offer food to all the hungry ghosts and make offerings to the Triple Gem for me, then you can earn more years to live.” After hearing from the ghost, Ananda immediately went to see the Buddha and asked for help. The Buddha consoled Ananda and taught him the Dharani which holds significant power and can fulfil the ghost's request. The origins of most food offering services can be traced back to this sutra. 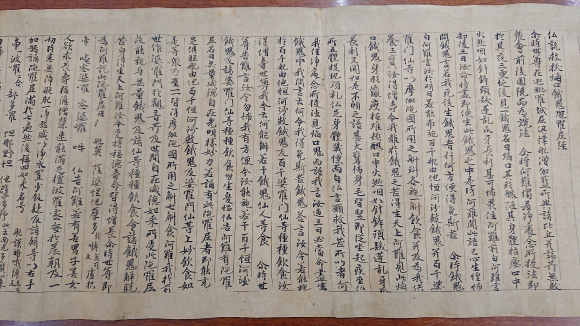 The fundamental content of the Yogacara food offering are the mantras from the Dharani Sutra for Saving the Burning-Mouth Hungry Ghosts and the Ambrosia Sutra (Skt: Amṛta-rāja; Chi: 甘露經), which was translated into Chinese by Master Shichanantuo (Skt: Śikṣānanda; Chi: 實叉難陀) (652-710) during the Tang Dynasty (618-907). However, due to various factors including turbulent social conditions and the rising of different schools of Buddhism, it was not until the Ming Dynasty (1368-1644) that more standard procedures of the food offering service started to be documented with commentaries by some popular branches. One of the well-known versions of this text was compiled by Master Tianji (Chi: 天機禪師) and was commonly known as the Tianji Burning-Mouth Service (Chi: 天機焰口). Afterwards, Master Zhuhong (Chi: 袾宏大師) (1535-1615) added annotations and explanations to the Tianji version in the Altar Etiquette of Yogacara Food Offering (Chi: 修設瑜伽集要施食壇儀). In the Qing Dynasty, Master Deji (Chi: 德基大師) deleted some parts of Master Zhuhong’s version and made some changes based on his own school. This became commonly known as the Huashan Burning-Mouth Service (Chi: 華山焰口). Both the Tianji and Huashan versions are widespread, and are probably the main sources for the practice in circulation today. 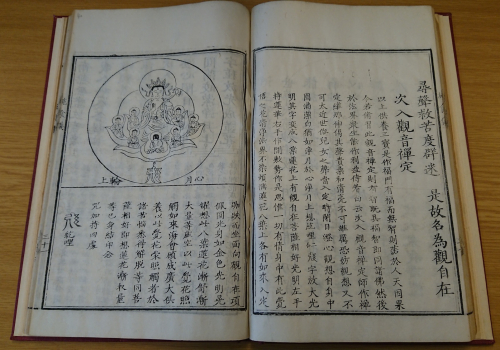 Although different schools might have different approaches to the food offering Dharma service, the central core of the content is mostly fixed. The principle components are as follows: 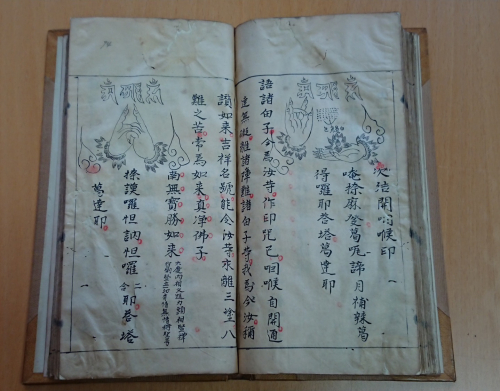 Opening the throat section in the Altar Etiquette of Yogacara Offering Service demonstrating the hand gestures (mudra) and mantras (BL Or.2179)

It is evident that the purpose of this Dharma service is to feed the hungry ghosts. However, the deeper significance is giving those who are suffering a chance to listen to the Dharma, initiate their Bodhi mind and liberate themselves from the realm. In addition, the service also gives the opportunity for practitioners to cultivate their Bodhi mind. This is an embodiment of the great compassion from all the Buddhas and Bodhisattvas that Buddhists need to learn about and practice as well.