Marking the bicentenary of the birth of the Bāb

Today's post coincides with the launch of  the British Library's new learning resource Discovering Sacred Texts  and exhibition of Sacred highlights in the British Library’s permanent Treasures Gallery. Our guest writer is the Baha'i scholar Dr. Moojan Momen who writes about the three unique works of the Bāb and Bahā’u’llāh, the twin founders of the Baha'i Faith which are on display for the first time. 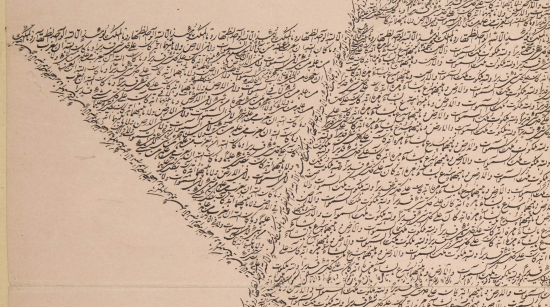 A section of a tablet hand written by the Bāb in the form of a five pointed star (BL Or 6887). Public Domain

October 2019 marks 200 years since the birth of Sayyid ‘Alī Muḥammad Shīrāzī (1819-1850), known as the Bāb (the Gate), one of the two founders of the Baha'i Faith. A merchant from Shiraz, Iran, the Bāb founded his own distinctive religious movement as well as preparing his followers for the coming of  “Him whom God shall make manifest,” Bahā’u’llāh (1817-1892). Both the Bāb and Bahā’u’llāh are considered by Baha'is as Manifestations of God, intermediaries between God and humanity, who reveal God’s will for the age in which they come. Muhammad, Jesus Christ, Moses, Zoroaster, Krishna and the Buddha are also considered by Baha'is as Manifestations.

Western responses to the Bāb

Accounts of the life of the Bāb and the brutal treatment meted out to his followers, made a profound impression both in Iran and further afield, especially in the West, where many thought the story of the Bāb reminiscent of that of Christ. Gobineau’s Religions et Philosophies dans l’Asie Centrale (1865) was the most influential volume in carrying the story to Western minds. The poet Matthew Arnold wrote in 1871 that “most people in England have a least heard the name” of the Bāb,[1] an indication of how deeply his fame had penetrated into far-off societies. An ongoing survey has discovered that almost 1,400 articles about the Bāb movement appeared in the Western press between 1845 and 1859. With his books such as A Year Among the Persians (1893), Cambridge orientalist Edward G. Browne did much to familiarise readers with the Bāb’s “gentleness and patience, the cruel fate which had overtaken him, and the unflinching courage wherewith he and his followers, from the greatest to the least, had endured the merciless torments inflicted upon them by their enemies.”[2]

All Europe was stirred to pity and indignation over the martyrdom of the Bāb…among the littérateurs of my generation, in the Paris of 1890 the martyrdom of the Bāb was still as fresh a topic as had been the first news of his death. We wrote poems about him. Sarah Bernhardt entreated Catulle Mendès for a play on the theme of this historic tragedy…[3]

Another influential figure whose attention was captured by the Bāb and Bahā’u’llāh was Tolstoy, who wrote that the Baha'is

have a great future…because they have thrown away the artificial superstructures which separate [the religions] from one another and are aiming at uniting all mankind in one religion…And therefore, in that it educates men to brotherhood and equality and to the sacrificing of their sensual desires in God's service, I sympathize with [it] with all my heart.[4]

The religion founded by the Bāb and Bahā’u’llāh is very much a religion of the Book. Baha'is believe that central to all the world’s great faiths, the power of the “Word” inspires human beings to develop their noblest qualities and create new patterns of society. Baha'i scriptures consist of the words of the Bāb and Bahā’u’llāh that were immediately written down, authenticated, and shared far and wide.

Iranians considered calligraphy the highest art form and the Bāb’s own calligraphy is of exceptional quality. His works were often composed in the shape of a five-pointed star, called a “Temple” (ḥaykal) because of its resemblance to the human form. The British Library holds an example of such a manuscript in the Bāb’s own handwriting, the only known copy of this work. 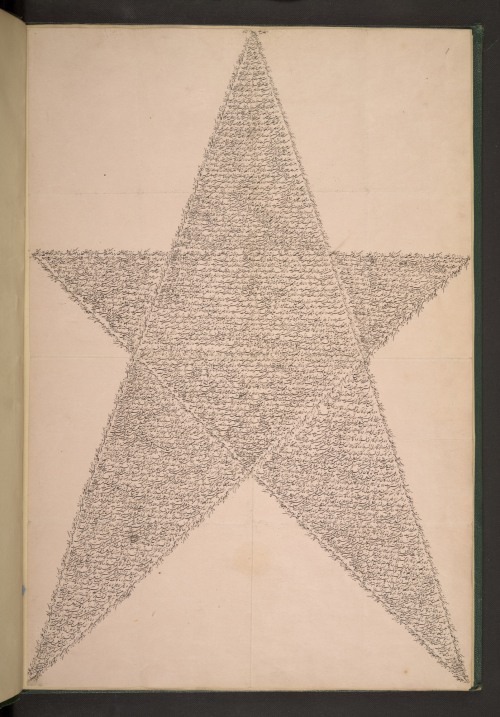 The handwriting of the Bāb in the form of a five pointed star, the ḥaykal  (BL Or 6887). Public Domain

The Bāb placed a great emphasis on perfection and refinement. “Whoever possesseth power over anything,” He wrote, “must elevate it to its uttermost perfection that it not be deprived of its own paradise.”[5] He gave the example of a piece of paper upon which some words have been written. The ‘paradise’ of that paper is to be adorned with gold illumination and patterns. In trying to bring all things to perfection, a human being is replicating the work of God, who brought into being the whole of creation in such a state. These ideas of the Bāb continue to influence the Bahā’ī community, especially in the building of Bahā’ī houses of worship around the world. 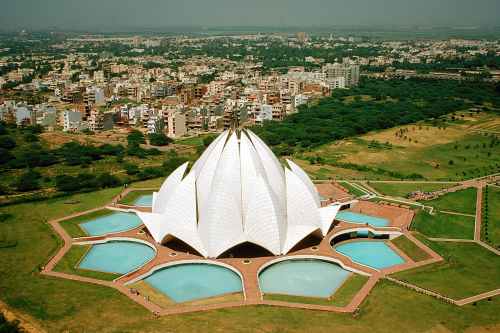 Encounter with an Irish doctor

Considered a heretic, the Bāb was put on trial in July 1848 and bastinadoed. An Irish physician resident in Tabriz, Dr. William Cormick treated the Bāb’s wounds and left this account of him:

He was a very mild and delicate looking man, rather small in stature and very fair for a Persian, with a melodious soft voice, which struck me much…In fact his whole look and deportment went far to dispose one in his favour.[6] 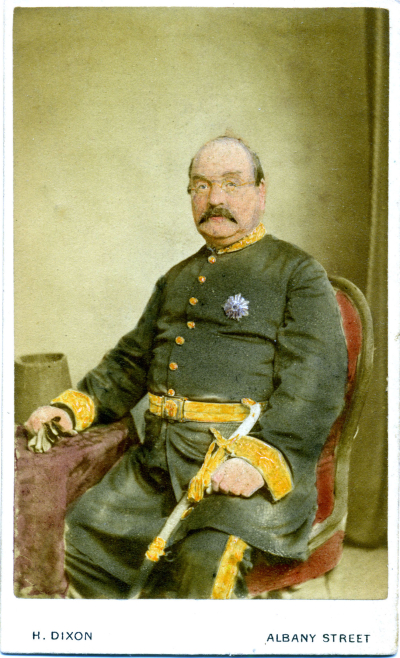 The Bāb was executed in 1850. Thousands of Babis were also killed, many of them in the most gruesome ways.

It was while incarcerated in 1852 in a subterranean dungeon in Tehran that one of the most distinguished of the Bāb’s followers, Bahā’u’llāh (his title means “the Glory of God”), had a spiritual experience that is regarded as the birth of his own prophetic mission. He was subsequently exiled to Baghdad, beginning a 40 year period of banishment and imprisonment at the hands of the Persian and Ottoman authorities.

In Baghdad, Bahā’u’llāh wrote a number of major works, such as The Seven Valleys and The Hidden Words, as well as his foremost theological treatise, the Kitāb-i Īqān (the Book of Certitude). After ten years, ahead of a further exile, Bahā’u’llāh declared himself to be “He whom God shall make manifest” that the Bāb had foretold. From Edirne in what is now European Turkey, Bahā’u’llāh announced himself to be the Promised One prophesied in all religions and proclaimed his mission in letters to the world’s major kings and leaders, including Queen Victoria, Napoleon III, Tsar Alexander II and Pope Pius IX.

Bahā’u’llāh too was an exceptional calligrapher. The British Library has in its collection an example of some of his handwriting exercises as a child. 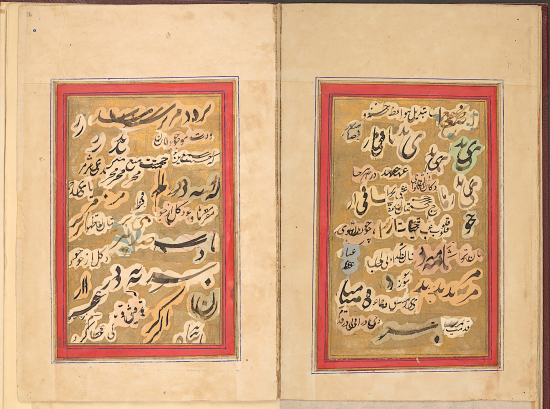 Calligraphic exercises of Bahā’u’llāh when a child (BL Or 11098). Public Domain

On many occasions his writings came into being in an extraordinary manner. Firstly, his secretary would have ready a number of reed pens and stacks of large sheets of paper. Bahā’u’llāh would then dictate to his secretary, speaking rapidly or chanting without pause. Such was the speed with which these verses had to be captured on the paper that they were only readable by the scribe himself. 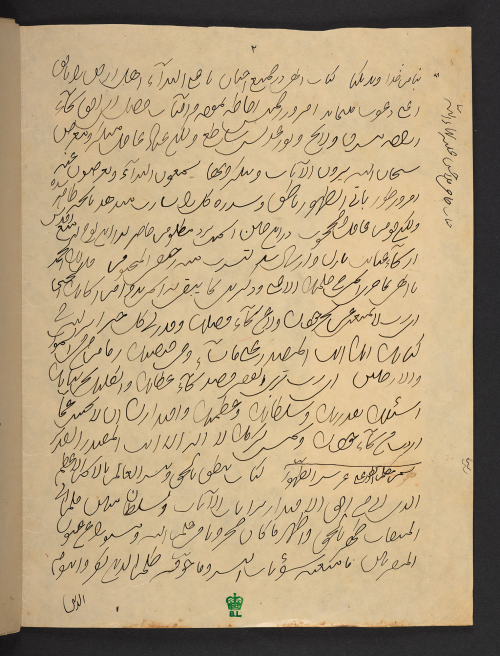 Revelation Writing: the script developed by Bahā’u’llāh’s secretary as a shorthand for taking his dictation (BL Or 16641). Public Domain

Later, the secretary would copy out what he had written in a legible handwriting. Bahā’u’llāh then approved the text. This version would then be copied and shared throughout the Middle East, and even as far afield as India, Burma (Myanmar) and China. Many Bahā’īs would bind collections of these writings into finely decorated volumes. 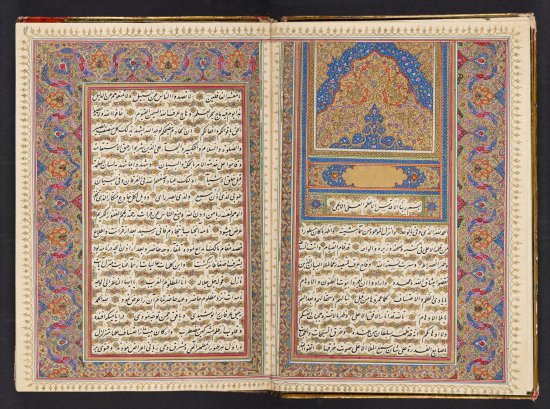 Finally imprisoned by the Ottoman authorities in the walled city of Akka (Acco), Bahā’u’llāh, wrote the most important of his works, the Kitab-i Aqdas (the Most Holy Book). In 1877, he moved to a mansion outside the city where he was visited in 1890 by Professor Edward G. Browne, who described the impression Bahā’u’llāh made upon him: 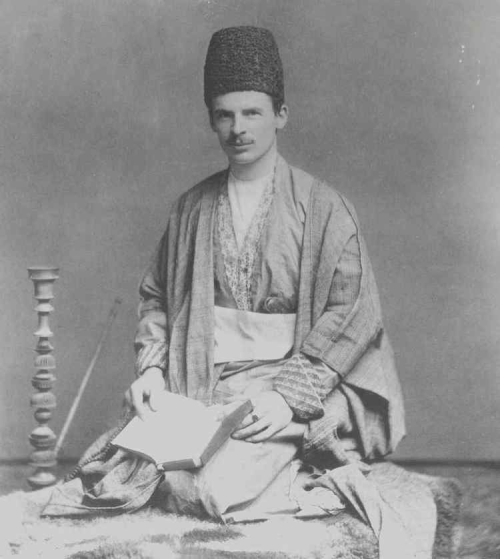 Portrait of Prof. E.G. Browne at about the time he visited Bahā’u’llāh. Public Domain, Courtesy of Moojan Momen

The face of him on whom I gazed I can never forget, though I cannot describe it. Those piercing eyes seemed to read one's very soul; power and authority sat on that ample brow; while the deep lines on the forehead and face implied an age which the jet-black hair and beard flowing down in indistinguishable luxuriance almost to the waist seemed to belie. No need to ask in whose presence I stood, as I bowed myself before one who is the object of a devotion and love which kings might envy and emperors sigh for in vain!

A mild dignified voice bade me be seated, and then continued:- “Praise be to God that thou hast attained!... Thou hast come to see a prisoner and an exile.... We desire but the good of the world and the happiness of the nations; yet they deem us a stirrer up of strife and sedition worthy of bondage and banishment.... That all nations should become one in faith and all men as brothers; that the bonds of affection and unity between the sons of men should be strengthened; that diversity of religion should cease, and differences of race be annulled—what harm is there in this?... Yet so it shall be; these fruitless strifes, these ruinous wars shall pass away, and the ‘Most Great Peace’ shall come...” [7]

Bahā’u’llāh’s shrine outside of Akka is considered the holiest place in the world by Baha'is. On Bahā’u’llāh’s instruction, the remains of the Bāb, which had been hidden in Iran for 50 years, were transferred to the Holy Land. In 1909 they were interred in a simple mausoleum on the slopes of Mount Carmel across the bay from Akka. They now rest beneath a majestic golden domed shrine, surrounded by exquisite terraced gardens. 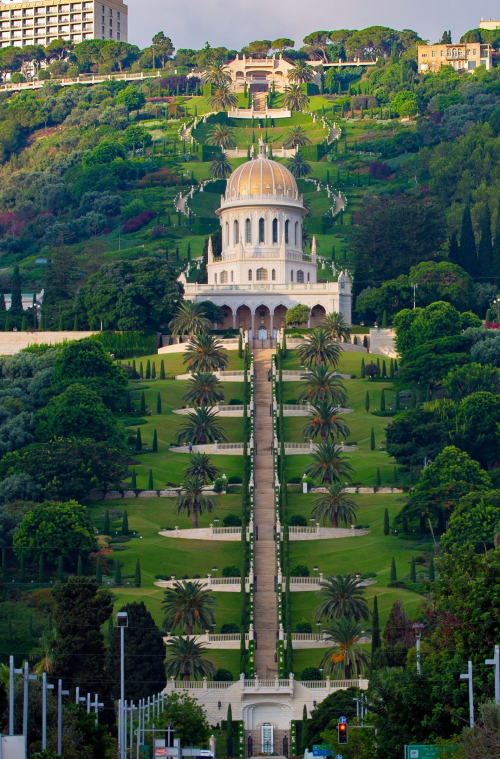 The Shrine of the Bāb on Mount Carmel. Copyright © Bahá'í International Community

Today, Baha'is, who number several millions and live in nearly every country in the world, are engaged with their friends and neighbours in a collaborative programme that aims to develop the spiritual and material prosperity of their communities.