BUDDHISM at the British Library

This is the seventh of a series of blog posts accompanying the British Library exhibition on Buddhism, 25 Oct 2019 – 23 Feb 2020

Buddhism is a new British Library exhibition exploring the origins, philosophy and contemporary relevance of one of the world’s major religions, from its beginnings in north India over 2500 years ago, to having around 500 million followers across the world today. The show has just opened its doors to the public following an opening ceremony with blessings from two Buddhist temples, Amaravati Buddhist Monastery in Hemel Hempstead and London Fo Guang Shan Temple. 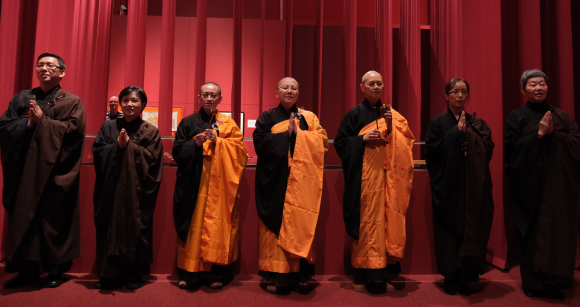 Blessings from members of the London Fo Guang Shan temple, at the opening ceremony of the Buddhism exhibition on 24 October 2019 at the British Library. Photo courtesy of D Meng.

Displaying over 120 exhibits, this is the first major exhibition in the UK with Buddhist scriptures and manuscript art at its heart. Colourful scrolls containing Buddhist texts, embellished books, painted silk banners and rare artefacts invite the visitors to discover the story of the Buddha and his teachings, and to go on a meditative journey through 2000 years and twenty countries. 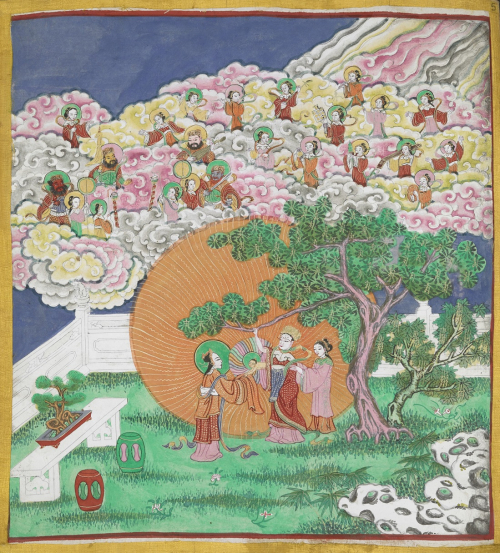 Prince Siddhartha’s birth in a block-printed book illustrating the Life of the Buddha, China, 1808. British Library, Or. 13217 f. 5

Early texts like sutras written on tree bark in the first century CE in the ancient kingdom of Gandhara, or scriptures composed in multiple languages during the first millennium CE found in caves near Dunhuang in northwest China, tell how Buddhism spread from its heartland in north India across Asia and beyond. 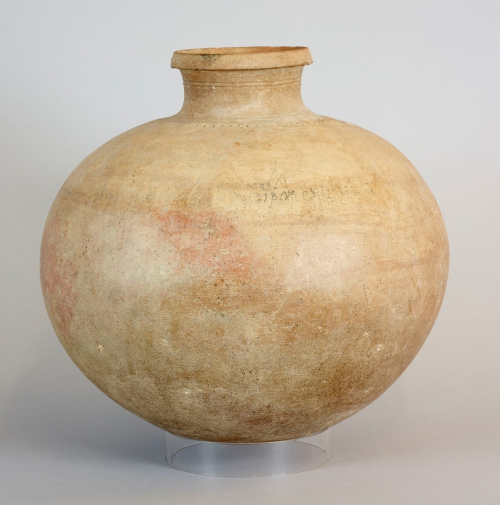 Water vessel with an offering inscription, that contained some of the oldest surviving Buddhist texts written on birch bark, Gandhara, 1st century. British Library, Or. 14915B (2)

Represented in the exhibition are the three main schools of Buddhism, each of which have their own version of the Buddhist canon: Theravada mainly practised in Sri Lanka and Southeast Asia, Mahayana in East Asia, and Vajrayana in Central Asia. Illuminated manuscripts and fine works of art from all three schools show how Buddhism tolerated and integrated local art forms, ideas and practices. They reflect the great diversity of Buddhist art across Asia, and at the same time the continuity of the Buddha’s teachings. 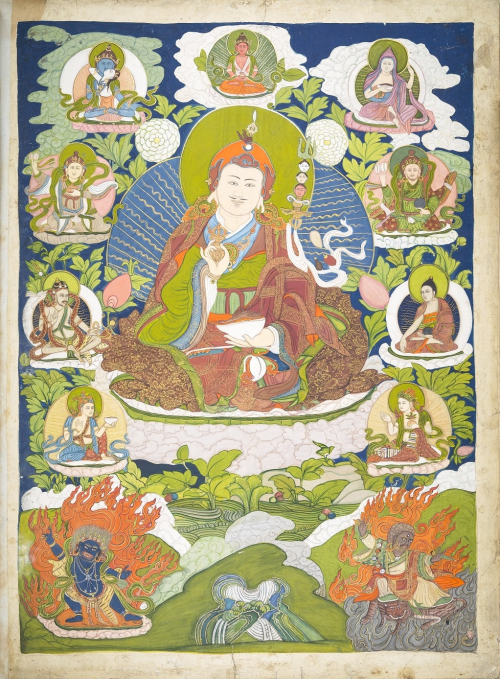 Thangka painting of Padmasambhava, the ‘Lotus-Born’, who is one of the most popular teacher figures in Tibet. India 1788-1805. British Library, Add. Or. 3048, from the collection of Sir Gore Ousely

The first part of the exhibition highlights the Buddha narrative and the concept of being a Buddha or “Enlightened Person”, which play a major role in all Buddhist traditions. Although the Buddha was initially not depicted in human form but symbolically, throughout the first millennium CE a rich artistic tradition emerged of depicting not only the Buddha, but also Bodhisattvas (persons seeking enlightenment), and important monastics and Buddhist teachers. Painted wall hangings and illustrated books from Nepal, China, Thailand and Burma reveal events in the life of the historical Buddha and his previous incarnations. 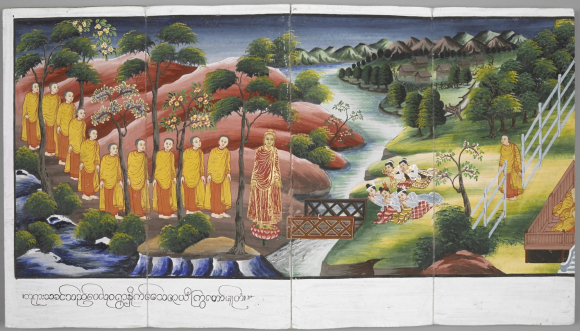 Illustration in a Burmese folding book depicting a scene from the Life of the Buddha, Burma, 19th century. British Library, Or. 13534, ff. 23-24

Buddhist doctrine developed from philosophical and cosmological concepts of ancient India which are represented in cosmology treatises and paintings displayed in the second part of the exhibition. The Buddha’s teachings are based on the idea of Karma, the principle of cause and effect. Karma determines the cycle of birth, death and rebirth (Samsara), which is regarded as a continuation of worldly suffering. His teachings about the Four Noble Truths and the “Middle Way” that leads to liberation from suffering are laid down in the Buddhist canon, Tripitaka. Some of the most important texts are written in outstanding calligraphy on gilded scrolls and in elaborately decorated books from East Asia, others are incised on palm leaves, gold, silver or ivory from Nepal, Bengal, Sri Lanka and Southeast Asia. 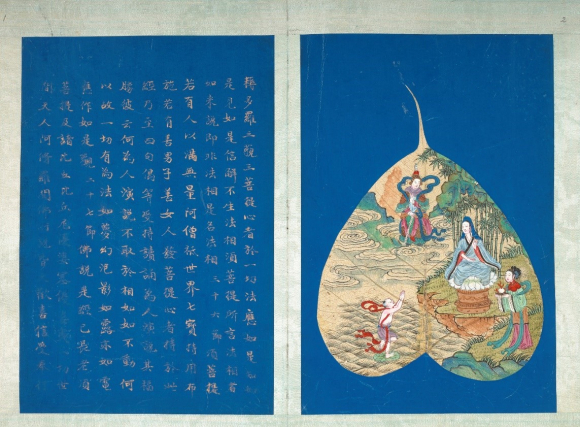 Painting of Guanyin (Bodhisattva Avalokiteshvara) on a leaf from a Bodhi tree in a book containing the Heart Sutra and the Diamond Sutra, two of the most popular texts of Mahayana Buddhism. China, 18th or 19th century. British Library, Add. 11746, f. 2

For 2000 years the creation of manuscripts and printed books has been an important religious activity to preserve and to disseminate the Buddha’s words. Buddhists continue to be keen adopters of new technologies, with monasteries being centres of research, translation and the production of scriptures. Early printed scrolls and books from China, Korea and Japan demonstrate the importance of the printing technology in the spread of Buddhism. 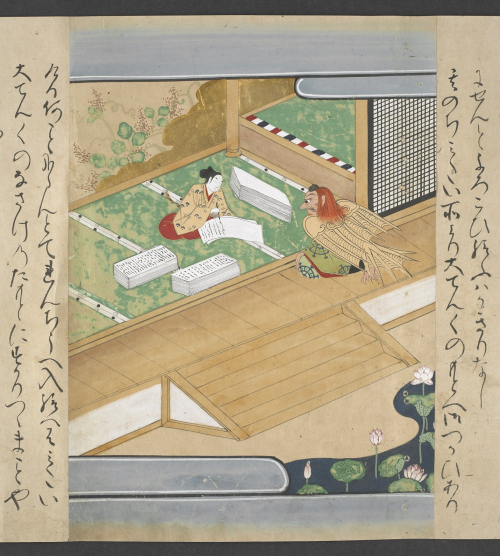 Illustration from the Japanese story Tengu no dairi depicting the tragic hero Minamoto no Yoshitsune while copying sutras. Japan, 1560-1600. British Library, Or. 13839 vol. 1

One of the many highlights of this exhibition is an arrangement of intricately gilded and lacquered manuscript furniture which gives an impression of a monastic library in Southeast Asia. Calm soundscapes from the Library’s Sound Archive and a light installation specially created for this show will take visitors on an immersive journey into the world of Buddhism. Contemporary art from Hong Kong, Taiwan and Singapore, as well as short films and interviews, illustrate why Buddhism is relevant in our time as many people are seeking alternative ways of life. The popularity of Buddhist art, and publications on Buddhist themes, has increased immensely in the past hundred years, and Buddhism is now part of the UK national curriculum. Mindfulness and meditation practices have become mainstream and are practised by many not only at home, but also in the workplace, in health care and in education. 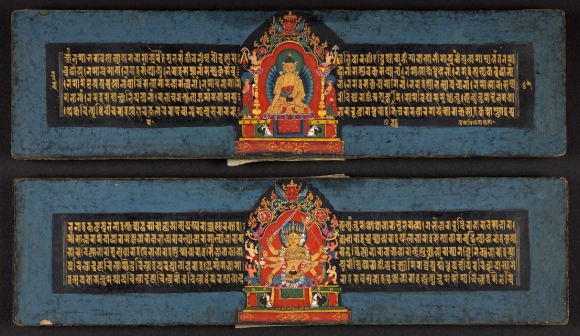 Illustrations of Buddha Ratnasambhava (top) and Bodhisattva Mahamayuri (below) in a manuscript containing the Pancharaksha, a collection of Sanskrit texts relating to five protective goddesses, Nepal, 1677. British Library, Or. 13946, ff. 62r-62v

Thanks to digitisation and international cooperation, as for example in the International Dunhuang Project, the Lotus Sutra Manuscript Digitisation project, and the Endangered Archives Programme, numerous Buddhist scriptures have recently been identified and described in detail. Many have also been translated into Western languages and published. The exhibition is the outcome of the combined effort of scholars and Buddhist practitioners from across the world who have been working with the Library’s curators for many years. 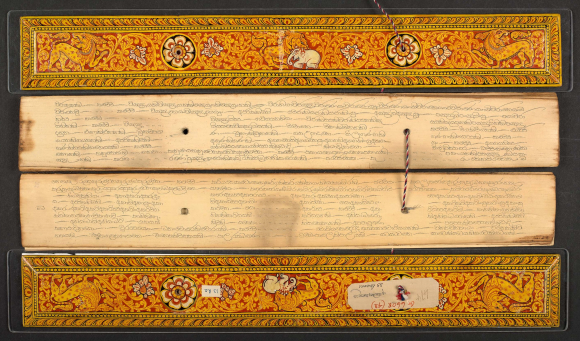 The exhibition is accompanied by a wide range of events including performances, workshops on art and mindfulness, talks on the history of Buddhism and aspects of contemporary practice, as well as a family day, the creation of a sand mandala and an early morning meditation session followed by musical performance. The exhibition book, which is available from the British Library shop, provides deeper insights into the origins, traditions, material culture and contemporary practice of Buddhism in five main chapters and twelve short essays written by leading scholars, Buddhist practitioners and Library curators. 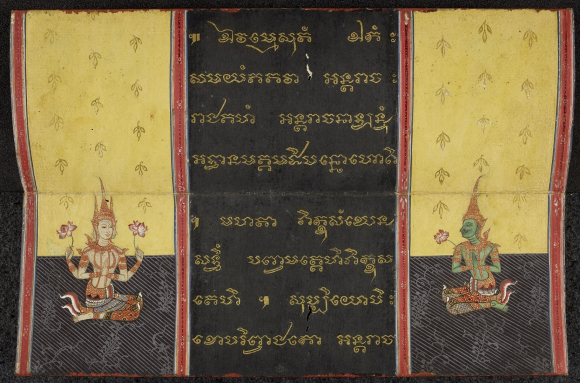 Thai folding book containing selected suttas and other extracts from the Pali Tipitaka written in Khmer script, with illustrations of the gods Brahma and Indra (Sakka) who asked the Buddha to reveal his insights to all sentient beings. Central Thailand, 19th century. British Library, Or. 16009 f. 5