This is the sixth of a series of blog posts looking forward to the British Library exhibition on Buddhism, 25 Oct 2019 – 23 Feb 2020

This month, October, marks the end of vassa or the Buddhist Lent, the three months rainy season retreat observed by the Sangha or Buddhist monastic communities. The end of vassa is celebrated by Buddhists with Pavarana, the inviting ceremony, followed by Kathina, the robe offering ceremony, which take place on Uposatha (Observance) day. At the end of Buddhist Lent, Buddhist monks are free to travel again, but before parting they should maintain monastic discipline and punish offenders, in order to purify the Sangha. At the Pavarana ceremony, each monk invites the other monks to point out to him any faults he has committed during the vassa retreat period.

Kathina robe-offering ceremony
The word kathina denotes a cotton cloth offered by lay people to bhikkhus (monks) annually, after the end of the vassa rainy retreat, for the purpose of making robes. On the termination of vassa, the Kathina robe offering ceremony is usually held at the monastery. This practice started quite early in Buddhist society, with the approval of the Buddha himself. When the Buddha was staying at Jetavana monastery at Savatthi, he granted permission for the bhikkhus to accept kathina robes from the laity, as several bhikkhus only had old and torn robes. It is the Sangha as a whole which receives these gifts of robes or plain cloth from the laity: the cloth must be offered to the whole Sangha, and not to individuals, and the bhikkhus will then decide which of the monks should receive the gifts. If the kathina offered is plain cloth, selected monks will do the cutting, sewing, and dying of the cloth in a single day. The gifts are then distributed to the individual monastics who have properly observed the rainy retreat. 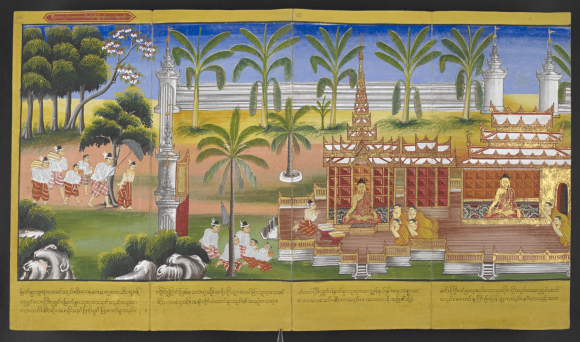 Jivaka, the Buddha’s physician, is described as the first layman to offer robes to Buddhist monks. Before that, Buddhist monks made their robes themselves from pieces of rag cloth. Jivaka also requested the Buddha to allow the monks to accept robes donated by lay people. The Buddha appreciated that it was very hard for the monks to make their robes themselves and he allowed his monks to accept kathina robes donated by the laity. British Library, Or. 14405, f. 32 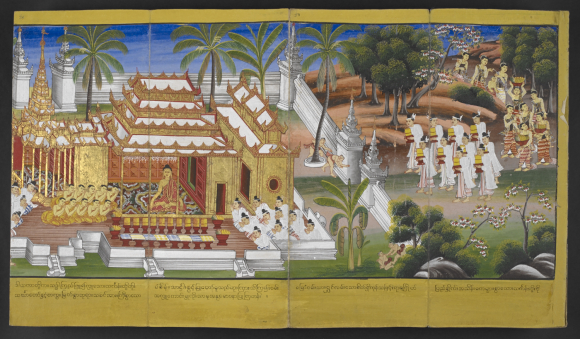 When the Buddha granted his disciples permission to accept kathina robes, lay people from the city of Rajagaha brought the garments and other requisites to the monastery. The Buddha is sitting at the centre, surrounded by monks and lay people. Rows of monastic gifts, such as kathina robes and other requisites, are depicted in front of the Buddha. British Library, Or. 14405, ff. 36-37

Dana, or giving, is a practice essential to Buddhism, and the offering of kathina robes is considered to be one of the most meritorious deeds. Offering kathina robes to the Sangha is thus valued as a way of keeping alive the true spirit of offering, as taught by the Buddha, and at the Kathina ceremony monks will chant the Kammavaca for Kathina robes. Kammavaca is a Pali term and it refers to collections of passages from the Tipitaka concerning ordination, the bestowing of robes and other rituals of monastic life. A Kammavaca is a highly ornamental type of manuscript, usually commissioned by lay members of society as a work of merit.

A leaf of a Kammavaca manuscript in Pali in Burmese square script, on lacquered cloth with gilded and lacquered boards. British Library, Or. 12010A, f. 1r

The Festival of Light
This festival celebrates the anniversary of the Buddha’s return from the celestial abode where he had spent Lent, giving the sermon on Abhidhamma or the Higher Doctrines to celestial beings and his former mother, who had been reborn as a deva. It was on the full moon day of the month of October that the Buddha descended from the Tavatimsa heaven to the abode of humans. Humans on earth therefore illuminate their homes, and paper lanterns dazzle the streets, to welcome back the Buddha, and candles and lighted little bowls of oil are placed on the terraces of the pagodas. The event is celebrated with lights, which is why it is called the Festival of Light. People pay obeisance to their parents and elders, following the example of the Buddha who paid a visit to his former mother to repay his debt of gratitude. 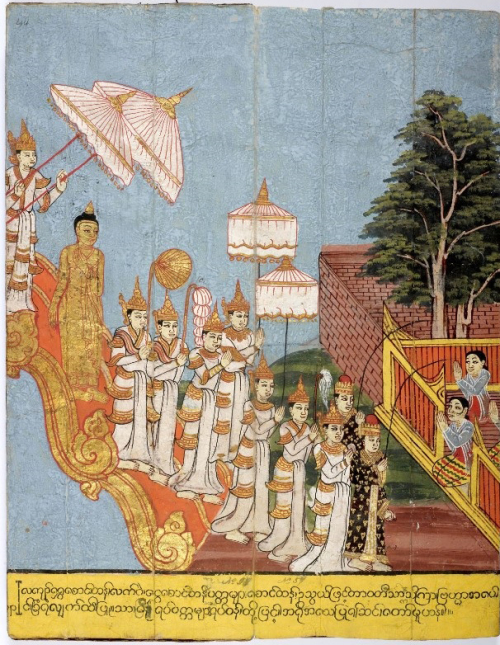 On the full moon day at the end of vassa, the Buddha was ready to descend to the human world. Sakka, the god who rules over Tavatimsa heaven, created a triple stairway of gold, silver and jewels. At the base of the stairway lay people from the city of Sankassa on earth wait to pay obeisance to the Buddha. British Library, Or. 14297, f. 44

The Kathina festival held at the conclusion of the rainy retreat originated 2,500 years ago and is still celebrated by Buddhists, with alms giving and offering of robes to the monks who observed the retreat. Buddhists believe that the offering of kathina robes is a great act, but in addition to giving robes, lay supporters also consider the bhikkhus’ other needs. The bhikkhus who receive the kathina robes deliver sermons to the lay supporters. The Festivals thus bring ordinary people together with the Buddhist orders, in a joyful spirit of shared devotion. In some places fire balloons rise up in the sky in order to pay homage to the Culamani Pagoda in Tavatimsa heaven, where the relic of the Buddha’s hair is believed to be enshrined. According to Theravada tradition, these offerings take place over a period of one month, from 19th October to 16 November.

Posted by Annabel Gallop at 1:56 AM