A testament to diversity: Kurdish manuscript collections at the British Library

In the exhibition Writing: Making Your Mark, we explored the connections between power and the written word. The use of writing can be an exceptionally efficient means of expanding a state's sovereignty far beyond the reach of its armies. Similarly, when a particular community or government chooses to use a particular script or language, it bestows upon that means of expression a sheen of officialdom and prestige synonymous with state sponsorship. 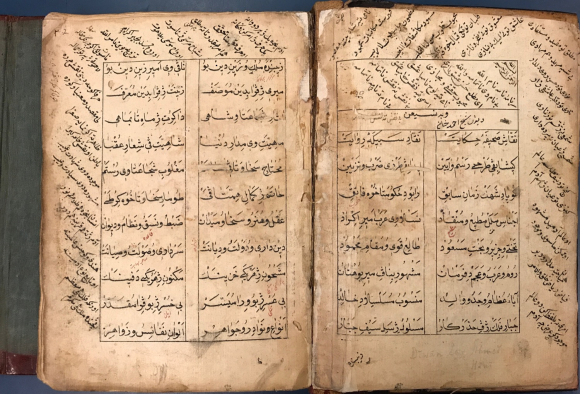 What does this have to do with the British Library's holdings of Kurdish manuscripts? For starters, it helps us to understand the context within which they were created. Unlike Ottoman Turkish, Arabic or Persian, Kurdish was not the language of a widespread, long-lasting Imperial power. As a result, prior to the end of the 20th century, it was not employed over long periods of time as a vehicle for the creation of state documents, or a state-sponsored literary corpus. Moreover, Kurdish was not the liturgical language of a large religious community with a long tradition of written cultural production. Hebrew might not have been a state language for thousands of years before the creation of the State of Israel, but its use as a liturgical language by Jews around the world helped ensure the creation of a hefty corpus of both religious and secular material in it. The same can be said, to a lesser extent, for Syriac. Kurdish was thus doubly disadvantaged in finding patronage for the creation of a large written canon prior to the 20th century, and as a result, we are left with relatively fewer manuscripts in it than compared to Ottoman Turkish, Arabic, Persian, Armenian, Hebrew or Syriac.

Indeed, the British Library holds a total of 8 manuscript texts in Kurdish, compared to the estimated 4000 items in Turkic languages. Of these, only 6 are volumes composed entirely, or nearly entirely, of poetry written in Kurdish. The best known of these is Or. 6444, a codex of Gorani poetry, which was transliterated and translated by Mr. Anwar Soltani, and eventually published as a bilingual edition entitled Anthology of Gorani Kurdish Poetry (YC.1999.b.8850). Some of the poetry included in the volume was composed by well-known Kurdish authors. None of them, however, is as famous as Ehmed Xanî, the author of the Kurdish epic Mam û Zîn, which the Library holds in manuscript form under the shelfmark Or. 11996. This work is a meditation on forbidden love, but it also encapsulates some of the core themes of a nascent Kurdish national identity. Mam û Zîn has been copied and published numerous times, especially since the creation of a de-facto Kurdish entity in Northern Iraq following the first Gulf War, when the Kurdish publishing industry blossomed. Nonetheless, this manuscript recension brings to life a historical dimension of the development of Kurdish literacy in the Middle East, while also acting as a window onto Xanî's poetical genius. 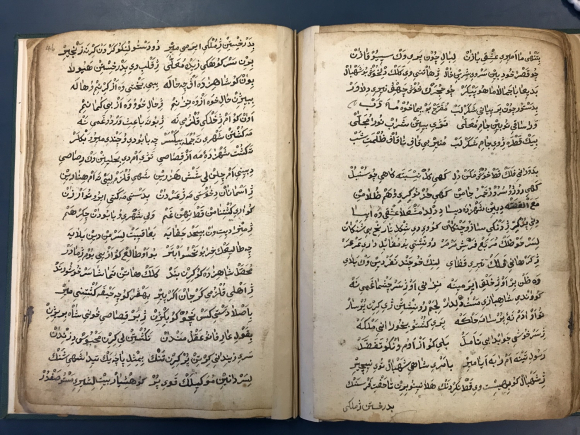 Among the other Kurmanji Kurdish manuscipts is Or. 8208, a poem known as Seyfu'l-Mulûk, or The Sword of Kings. The Library's copy is badly damaged, and although the text is largely legible, many of the pages have lost their edges, in some cases depriving readers of complete words of phrases. This story is set in Egypt, where the action revolves around the adventures of a particular prince, but the origins of the tale are Persian. Versions of the Seyfu'l-Mulûk can be found across the Islamic world, and this Kurdish version attests to the manner in which such texts were accepted and assimilated into broader Kurdish creative culture. 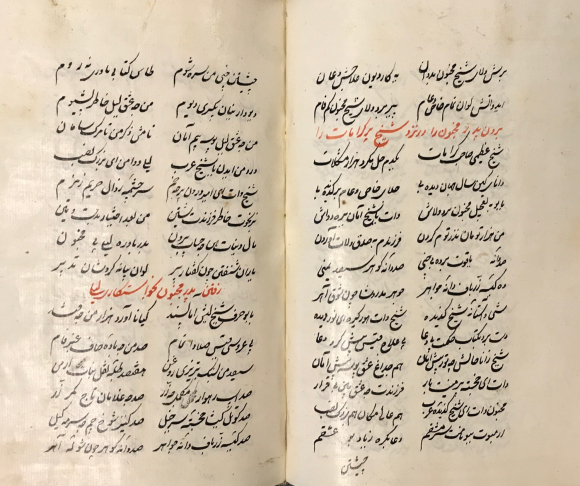 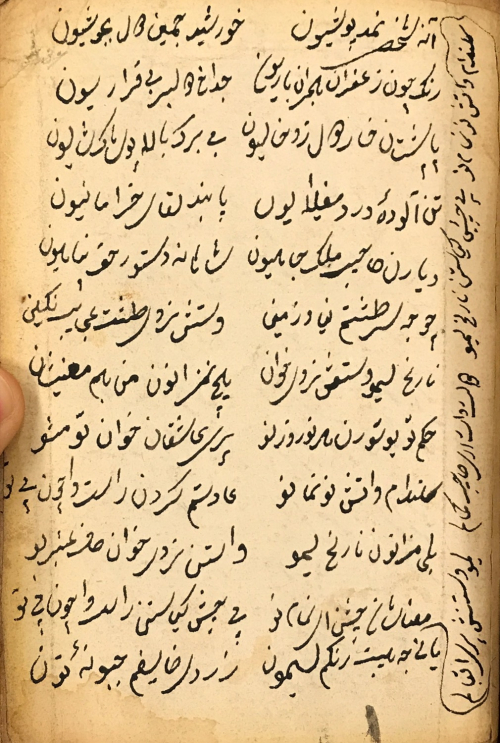 Other items within the Kurdish collections are translations of well-known Persian works into the Gorani dialect. Add MS 7829 presents us with two stories: that of Leyla and Mecnun; and another of Khvurshīd-i Khāvar. Add MS 7826, in contrast, is a Gorani translation of Khusraw va Shīrīn. Finally, Add MS 23554 is the story of Bahrām va Gulandām, yet another Persian epic of reasonable fame amongst Middle Eastern communities. The simple production of all three manuscripts, as well as the lack of information about the copyist or where they were created, lead us to believe that they were part of a broader reading culture among Kurdish speakers. They might not be remarkable items of art and luxury, but their construction and formatting provide us with valuable information about the manner in which Kurds read and shared literature in their native tongue, all while remaining part of a broader West Asian cultural space. 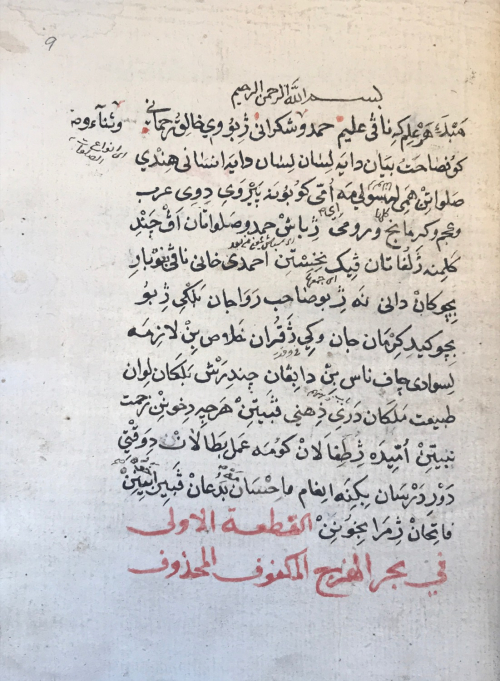 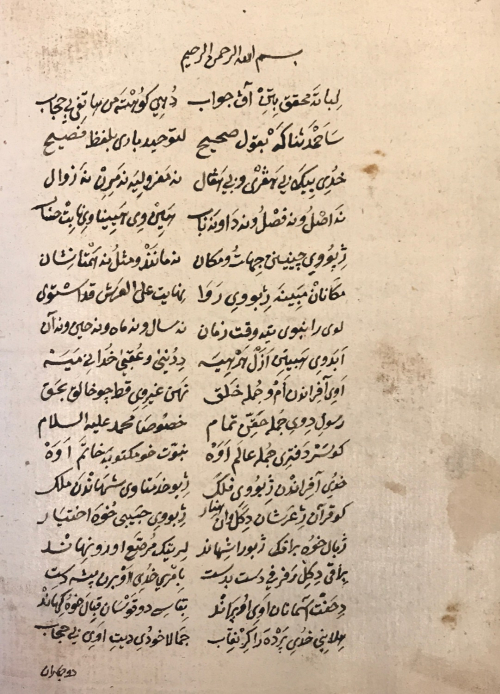 The last item in the collections containing Kurdish poetry is Or. 5932. It contains two Kurmanji Kurdish poems among various other works in Arabic, Ottoman Turkish and Persian. The first Kurmanji Kurdish work is the Nûbihara Biçûkan, composed by Ehmed Xanî as a means of teaching the Arabic language to Kurdish students at madrasas. The second is known as the Edîqeya Îmanî, another didactic work originally composed by Ehmed Xanî. The Edîqeya was also traditionally used as a starter text by Kurdish students at madrasas. The inclusion of these two particular poems in the codex is apt, given that the final text is an Arabic didactic poem aimed at helping Persian-speaking students learn the Arabic language; a mandatory subject for anyone studying the Qur'an.

One of the most challenging aspects of creating a cohesive and cogent collection of Kurdish works is the dialectical differences that exist between Kurdish speech communities. Today, there are two main dialects, or languages (the distinction is far from hard and fast), spoken and written across the Middle East. Kurmanji is the dominant Kurdish language in North and West Kurdistan, primarily spoken by Kurds in Turkey, Syria and Armenia, as well as parts of northern Iraq and north-eastern Iran. Sorani, by contrast, is used primarily in Central and East Kurdistan, covering northern Iraq and western Iran. Today, Kurmanji in Turkey and Armenia is written in Latin script, while Sorani in Iraq and Iran is written in Arabic script (as is Kurmanji in Syria). Cyrillic script was used in Armenia prior to 1991, but Armenian Kurds and Yezidis have since switched to the Latin standard. Add to this a plethora of local dialects that differ, in various degrees, from the commonly used lects of Amed (Diyarbakır), Slêmanî and Hêwler, and the related but distinct Zazaki and Gorani languages, and you get the totality of the Kurdophone sphere. All of this leads to a situation of remarkable diversity within the written corpus, one not usually seen in that of a state language. All texts in the British Library's Kurdish manuscript collections are written in Arabic script, which bedevils the task of the cataloguer. They are faced with the exceptionally difficult task of properly identifying the dialect of the text, in addition to the other pertinent information relating to the manuscripts, without the handy tool of state-sponsored standardization usually employed when cataloguing published works. 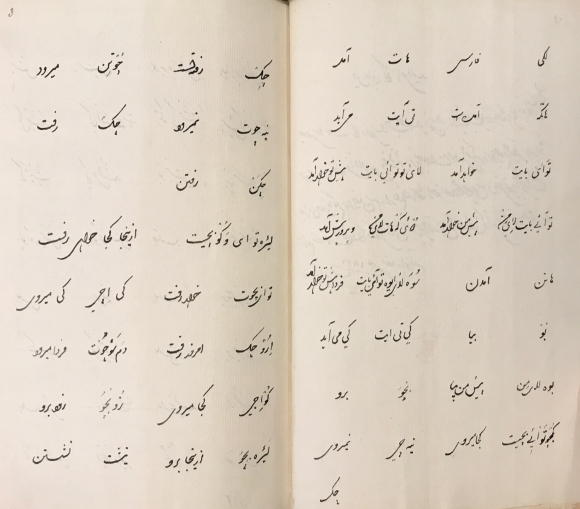 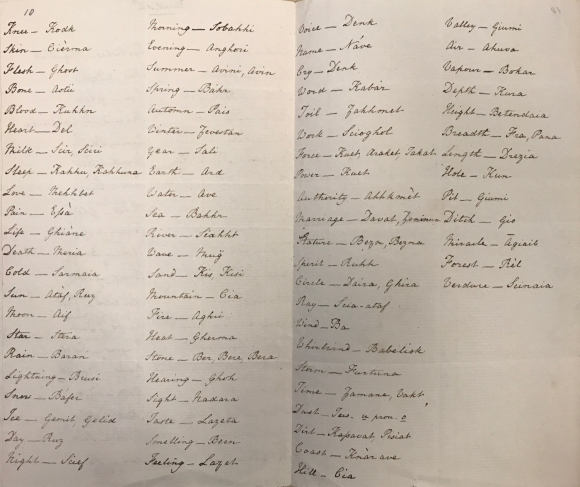 Linguistic diversity, far from being a hindrance, enriches our collections. In addition to the variety of dialects reflected in the poetic works, the British Library also holds a number of handwritten wordlists of Kurdish dialects in Iraq and Iran. The first of these, found under the shelf mark Add MS 26319, round out the collections and help to bolster our corpus of scholarly material relating to the Kurdish linguistic space. The codex is one that was created by the last owner of the manuscripts - C. J. Erskine - prior to its purchase by the British Museum in 1865. It holds an English-Kurdish glossary, as well as Persian-Laki Kurdish and Persian-Ardalani Kurdish (possibly a reference to Gorani) wordlists. While far from serious linguistic treatises on Kurdish dialectology or grammar, they do nonetheless provide a look at some of the pre-standardization aspects of Kurdish speech communities. They point to the ways in which linguistic diversity among the Kurds was conceived, sometimes by Western Orientalists, and sometimes by Kurds themselves. Such glossaries were a common phenomenon among British military and colonial officials, and more official versions were often published by governmental agencies. One need only look at IOR/L/MIL/17/15/52, a mass-produced multilingual volume entitled "Vocabularies: English, Arabic, Persian, Turkish, Armenian, Kurdish, Syriac" (digitised as part of the Qatar Digital Library), to see their importance within the context of the late British Empire.

Together, this motley collection of holdings produced by Kurds and colonial administrators provides a unique entry point to pre-20th century Kurdish cultural life. A lack of state sponsorship deprived Kurdish communities of some of the resources needed to create a written canon on the scale of the Persian, Arabic or Ottoman Turkish ones. It did not, however, stops the Kurds from seeking to write down, share and disseminate texts, and to preserve their cultural production for future generations. The British Library is lucky to be custodian of a small snapshot of such dynamics, which it aims to make available to all those seeking to understand better the history of Kurdish cultural expression.

The author would like to thank Mr. Yakup Aykaç of Artuklu Mardin Üniversitesi for his great help in the identification and description of Kurmanji Kurdish works within the British Library's collections.

Posted by Ursula Sims-Williams at 1:14 AM