Malay Seals from the Islamic World of Southeast Asia

The Malay world of maritime Southeast Asia has long been connected by political, economic, and cultural networks, the lingua franca of the Malay language, and the faith of Islam.  Malay seals – defined as seals from Southeast Asia or used by Southeast Asians, with  inscriptions in Arabic script –  constitute a treasure trove of data that can throw light on myriad aspects of the history of the Malay world, ranging from the nature of kingship to the form of Islamic thought embraced. As small but highly visible and symbolic emblems of their users, Malay seals were designed to portray the image of the self that the seal holder wished to project, but they were also no less strongly shaped by the prevailing cultural, religious, and artistic norms of their time. It is these multiple layers of identity, both consciously and subconsciously revealed in seals, that are recorded, explored, and interpreted in a new catalogue of Malay seals. 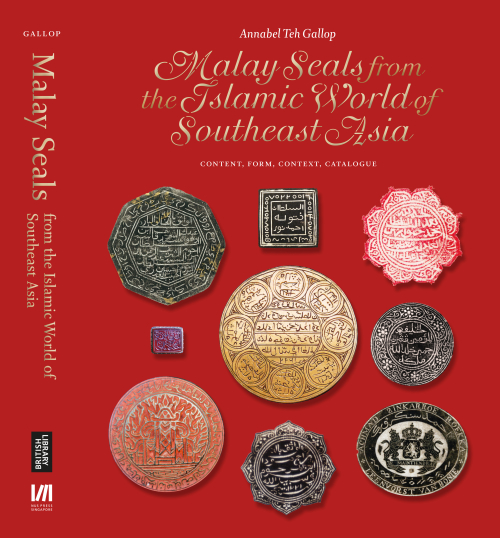 Malay seals from the Islamic world of Southeast Asia  (Singapore:  NUS Press, in association with the British Library, 2019)

Malay seals from the Islamic world of Southeast Asia, published in Singapore by NUS Press in association with the British Library, and in Indonesia by the Lontar Foundation, comprises a catalogue of 2,168 seals sourced from more than 70 public institutions and 60 private collections worldwide. The seals are primarily recorded from impressions stamped in lampblack, ink or wax on manuscript letters, treaties and other documents, but around 300 seal matrices made of silver, brass or stone are also documented. These Malay seals originate from the present-day territories of Malaysia, Brunei, Singapore, Indonesia and the southern parts of Thailand, Cambodia and the Philippines, and date from the second half of the 16th century to the early twentieth century. 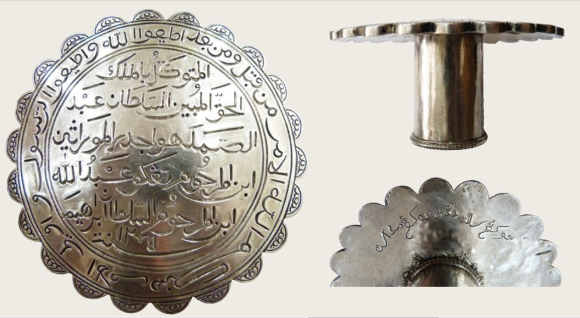 In the catalogue, elegantly designed by Paul Luna - Emeritus Professor of Typography at Reading University, and an expert in the design of ‘complex text’ – each seal is illustrated and the inscription presented in transcription, transliteration and English translation.  Also noted is biographical information on the seal holder (when available); the size, shape and medium of the seal; information on the manuscript on which the seal was found; and the locations of all other known impressions. A statistical overview hints at both the wealth of data encountered and the fragility of survival: over 10,000 impressions of Malay seals have been documented, but more than half the seals in the catalogue are only known from a single impression.

The catalogue began life two decades ago as a handlist of Malay seals in the British Library, and then evolved to include seals from other collections, mainly impressed on letters, treaties, edicts, and legal and commercial documents. In the Malay world, seals were a royal prerogative, their use restricted to the ruler and court officials, and most Malay seals known today are found on correspondence with European officials. In the British Library, the main sources of original Malay seals are letters from the collection of Thomas Stamford Raffles, and documents relating to the East India Company held in the India Office Records. The Endangered Archives Programme has also provided digital access to seal on manuscripts held in Indonesian collections.  Shown below are a few examples of manuscripts bearing Malay seals in the British Library, accompanied by the catalogue entry. 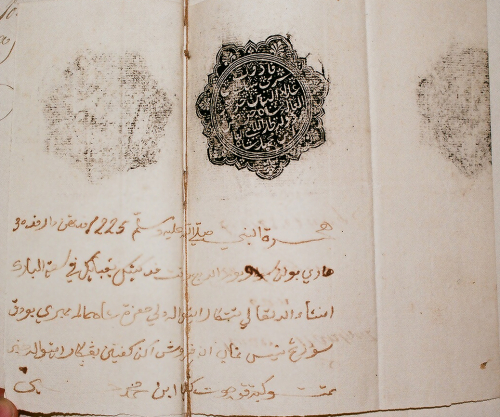 Document recording the gift of a slave from Sultan Johar al-Alam Syah of Aceh to Captain Baumgarten, 30 Syawal 1225 (28 November 1810).  Melaka Records, British Library IOR R/9/22/45, f. 50r.  Like most Malay seals, the seal was stamped in lampblack, which has smudged when the paper was folded. 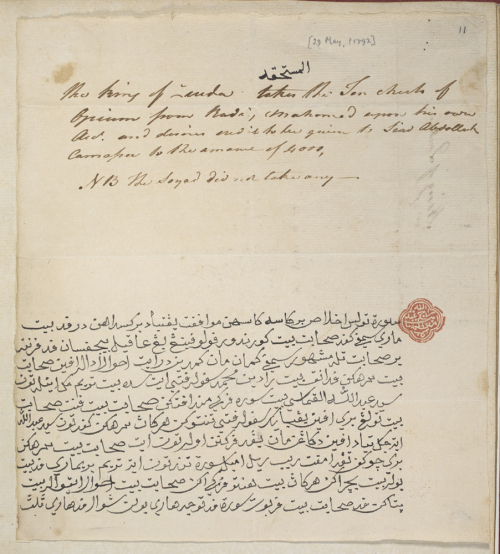 Due to Siamese influence, Kedah seals were generally stamped in red ink and not the lampblack favoured in most Malay states. The seal on this letter is the sultan's small private seal, rather than his official seal of state. 150 examples of this seal have been documented, mostly from Sultan Abdullah's correspondence with Light, as noted in the catalogue entry below. 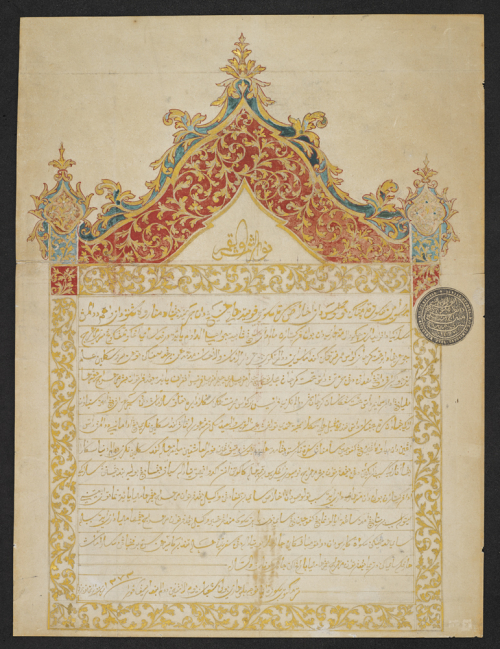 It is often assumed that the most important Malay letters were illuminated, but in fact only a small number of courts ever produced illuminated letters, including Aceh, Johor, Pontianak, and Palembang. This finely decorated letter from Johor is the only Malay letter known written in gold ink. The seal, stamped in black ink, is catalogued below. 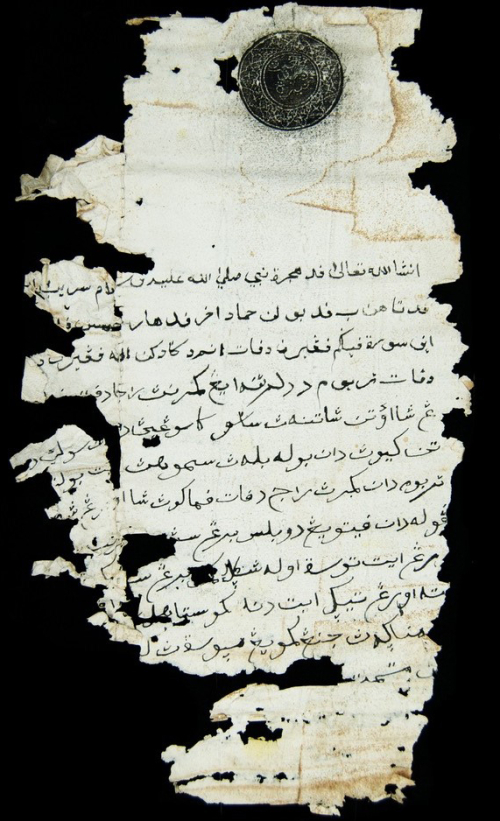 Edict (surat piagam) from Pangiran Dipati Anum of Jambi, Sumatra, to Dipati Terbumi, dated Thursday in Jumadilakhir 10--.  This letter may date from the 17th century: although the date is incomplete as the paper is torn down the left side after the word seribu (one thousand), the next word appears to start with alif, and hence is most likely empat (four) or enam (six), and not seratus or dua ratus (one or two hundreds), giving a date in the first century of the second Hijrah millennium.  British Library, EAP117/51/1/10, Collection of Depati Atur Bumi, Hiang Tinggi, Kerinci, Jambi. The seal is catalogued below.

The majority of the over 2,000 seals in the new catalogue have been sourced from documents similar to those shown about.  Unlike in many other parts of the Islamic world, Malay seals are rarely encountered in manuscript books. However, perhaps two of the most unusual seals in the catalogue are those of Princess Ambung of Riau, attesting her ownership of prized items of silverware. 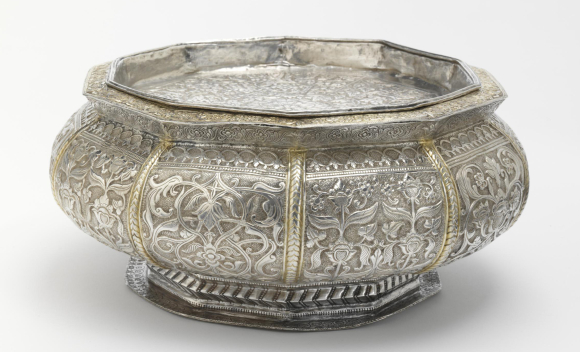 10-sided betel box (tepak sirih) with an inset tray lid, chased silver and partly gilded, Riau islands, 19th century. Stamped on the base with the ownership seal of Tengku Ambung. V&A I.S. 268-1950.A.  One of Tengku Ambung's two seals is catalogued below:

The picture that emerges from a consideration of this wealth of data is of a Malay sealing tradition, involving the regular chancery use of locally manufactured seals with inscriptions in Arabic script, which probably evolved only in the 16th and early 17th centuries in the Muslim courts of the archipelago. Although seals had certainly been present in maritime Southeast Asia over the preceding millennium – the signet ring of the king of Srivijaya was reported in Song records of the 11th century, and Ibn Battuta noted the use of seals in Pasai during his visit in the 13th century – there does not appear to have been a consistent and coherent usage of seals in any part of the Malay world before the 17th century, except in Java. A possible impetus for the increasing use of Malay seals may have been the arrival on the scene of the Dutch East India Company (VOC) around 1600, and the emphasis the Dutch placed on the use of seals in treaties, in a way that the earlier wave of Portuguese and Spanish emissaries did not.  The well-established sealing culture in Islamic lands to the west provided the Malay world with the means of response to this sigillographic challenge, but Malay seals were nonetheless designed primarily to strike a chord within the region itself, while still clearly identifying their owners as full members of the international Islamic community.

Malay seals from the Islamic world of Southeast Asia, by Annabel Teh Gallop.
Singapore: NUS Press in association with the British Library, 2019.
852 pp.  ISBN: 978-981-3250-86-4
Distributed in North and South America by Chicago University Press
Distributed in the UK by Bernard Quaritch Ltd

The catalogue is published in Indonesia by the Lontar Foundation, with a jacket design based on the illuminated Johor letter shown above. 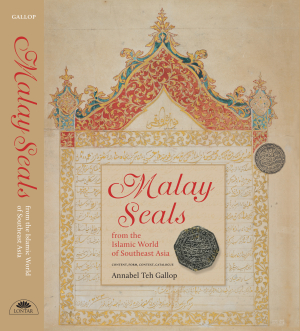 Posted by Annabel Gallop at 3:50 AM