The Ring of Solomon in Southeast Asia

Batak manuscript books from north Sumatra, written on tree-bark and then folded accordion-style, are known as pustaha. These generally contain texts on divination and spells, and were compiled by a shaman known in Batak as a datu.  Many pustaha contains magical diagrams in red and black ink, and a symbol that frequently appears in these Batak books is a design of two overlapping squares, the smaller one rotated by 45 degrees and set within the other, with eight looped corners.  The upright square is called bindu matoga, and the diagonal one bindu matogu.  In some pustaha this symbol is shown enclosing a turtle, and is itself surrounded by a snake.

A small diagram of two overlapping squares, bindu matoga and bindu matogu, can be seen on the open page at the right, alongside a representation of a labyrinth, in a Batak pustaha, containing a text on divination. British Library, Add. 19381

This design of two overlapping squares with eight looped corners is extremely old: the earliest example known is engraved on an amulet from Mohenjo-Daro in the Indus valley, and thus probably dates from not later than ca. 1300 BC, and slightly variant forms are found as threshold designs in India and Sri Lanka.  The symbol was the subject of a very detailed study by Carl Schuster (1975), who showed convincingly that this composition can be linked to the Indian myth of creation, the Churning of the Ocean of Milk, when the snake Vasuki was used as a rope to turn the churning pole on the back of a cosmic turtle.  Consistent with this cosmic interpretation is the suggestion by the renowned scholar of Batak manuscripts, Petrus Voorhoeve, that the two bindu represented the four cardinal and four intermediate points, and were therefore a symbol of the earth.

In mainland Southeast Asia, the design is widely found in esoteric contexts in Thai and Khmer manuscripts, particularly associated with yantras or magical symbols that were often used as tattooes or drawn on amuletic clothing.  Numerous variants of this symbol can be seen in a 19th century manuscript held in the British Library of yantras in Thai in Khom (a variant of Khmer) script, Or. 15568. 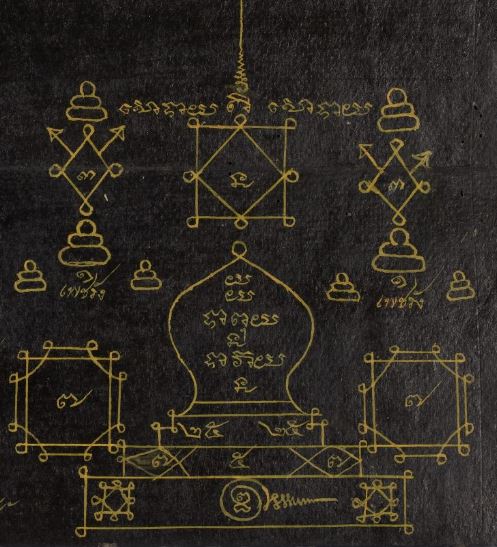 Several examples of a yantra of two overlapping squares can be seen in a 19th century manuscript in Thai in Khom script, British Library, Or. 15568, f. 6v (detail)

More unusually,the symbol is also seen depicted in a Buddhist text.  In a Thai illustrated manuscript of the Bhuridatta Jataka, one of the Birth Tales of the Buddha, an evil-minded Brahman and snake charmer captures Bhuridatta (the Buddha in one of his former existences as a serpent) using magic spells (mantra). In the picture shown below, the magic symbol (yantra) on the fan and the tattoo on his leg are both accompanied by letters in the sacred Khmer Khom script (with thanks to Jana Igunma for this explanation). 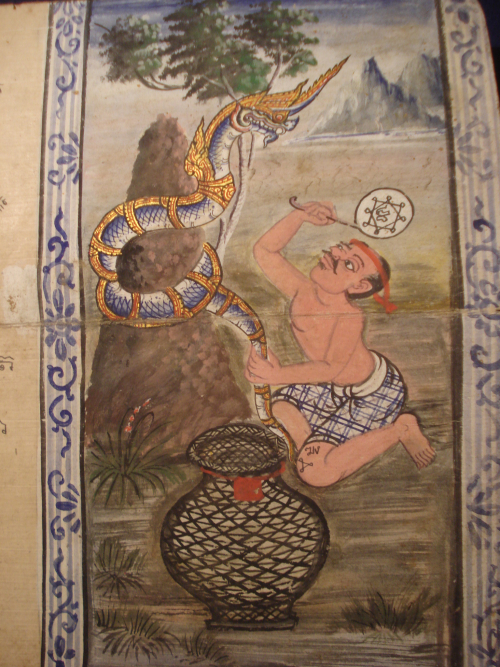 A scene from the Bhuridatta Jataka, one of the Birth Tales of the Buddha, where the two overlapping squares with eight looped corners can be seen on the fan held by the evil Brahman. British Library, Or. 16710, f. 6.

The overlapping squares also appear frequently in Islamic texts from all over the Malay archipelago. The name of this amulet, and a concise explication of its power, is given in a mystical notebook from west Sumatra said to have belonged to the Padri leader Tuanku Imam Bonjol (1796-1864), now held in Leiden University Library (Cod. Or. 1751).  Shown below is a coloured diagram with the two overlapping squares, containing the word Allāh written twice, and with a pentagram in each of the five compartments, while around it is written the shahādah, the Muslim confession of faith.  Alongside reads the following caption in Malay: Inilah syarh cincin Sulaiman ‘alayhi al-salām, barangsiapa memakai dia rezekinya pun tiada berkurang, tamat, ‘This is an explanation of the ring of Solomon, peace be upon him: whoever wears it will never lack for fortune, the end’. 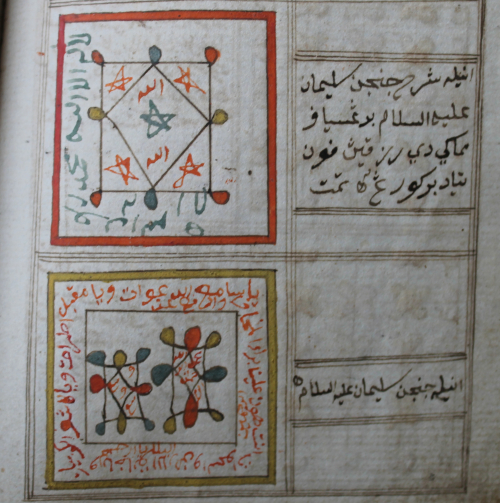 ‘The ring of Solomon’, from the notebook of Tuanku Imam Bonjol, west Sumatra. Leiden University Library, Cod. Or. 1751, p. 121.

The name ‘Sulaiman’ refers to the Islamic prophet Sulaymān bin Dāwūd, known from earlier Christian and Jewish tradition and sacred texts as King Solomon, son of King David.  Sulaymān is frequently mentioned in the Qur’an, with many descriptions of his esoteric knowledge granted by God: he could understand the speech of birds and animals (Q. 27:16, 19), and he was able to command legions of jinn (Q. 21:82, 34: 12).  His magic power was believed to be effected by the means of a talismanic ring engraved with ‘the most great name’ of God, which in Arabic magical texts and on amulets is represented by seven symbols, ‘the seven seals of Solomon’.  One of the symbols which makes up the ‘seven seals of Solomon’ is a five or six-pointed star.   The star alone, whether a pentagram or hexagram, is a very common amulet encountered in Islamic magic which is itself called ‘the seal of Solomon', khātam Sulaymān.  Very occasionally, the star is eight-pointed, and this may have been a crucial link with the eight-looped symbol, which has become known in Malay as ‘the ring of Solomon', cincin Sulaiman. 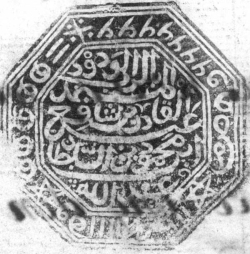 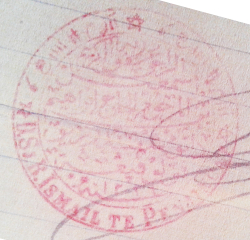 Although the 'Seven Seals of Solomon' are occasionally found in Malay manuscripts and seals, as shown above, the name of Solomon or Sulaiman is much more closely linked with the 8-looped ‘ring of Solomon’ amulet. This occurs all over Southeast Asia, but it seems to have a particularly strong association with the cultural zone stretching through the islands of Maluku up to the southern Philippines.  In Maranao communities in Mindanao, this symbol is called sising Raja Solaiman, ‘King Solomon’s ring’, and is very commonly used in amulets for driving away evil spirits, for palimonan charms to make the wearer vanish from sight, and for kebel (invulnerability) charms, to protect against other amulets or other sources of danger.  It has also been noted as a marginal design in a Qur’an manuscript from Taraka, Mindanao, and inscribed on a small piece of paper containing a prayer, found inside another Qur'an manuscript from Mindanao. 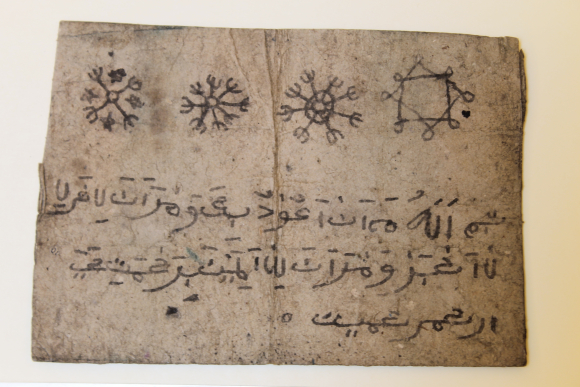 The 'ring of Solomon', inscribed with other symbols above a prayer, found inside a Qur'an manuscript from Mindanao. University of Virginia Library, MSS 13296 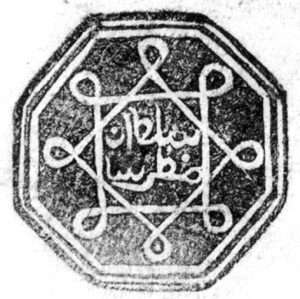 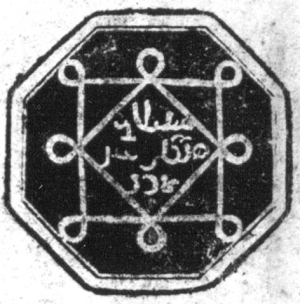 Thus the label of a powerful Islamic talisman, the 'Seven Seals of Solomon', and of the pentagram known as the ‘Seal of Solomon’, was in the Malay Muslim world applied to an design of two overlapping 8-looped squares, an amulet already deeply embedded throughout the archipelagic world of Southeast Asia, which became known as the 'Ring of Solomon'.

This study of the 'Ring of Solomon' was initiated as part of a research project on Mindanao manuscripts coordinated by Prof. Midori Kawashim, which resulted in the publication: A.T.Gallop, Cultural interactions in Islamic manuscript art: a scholar's library from Mindanao.  The library of an Islamic scholar of Mindanao: the collection of Sheik Muhammad Said bin Imam sa Bayang at the Al-Imam As-Sadiq (A.S.) Library, Marawi City, Philippines:  an annotated catalogue with essays, edited by Oman Fathurahman, Kawashima Midori and Labi Sarip Riwarung.  Tokyo: Institute of Asian, African and Middle Eastern Studies, Sophia University; pp. 205-248.

The cat. numbers of the Malay seals reproduced above refer to: A.T. Gallop, Malay seals from the Islamic world of Southeast Asia: content, form, context, catalogue. Singapore: NUS Press in association with the British Library, 2019.