World Aids Day was first marked on 1 December 1988, an historic event commemorated by the issue of postage stamps all over the world, including in Asia, Africa and the Middle East. As noted in the first of this two-part blog post, issued on 1 December 2019, the philatelic material produced then and in subsequent years can thus provide important insights into Black, Asian and Minority Ethnic (BAME) contributions towards art and design, and more examples are presented in the second part of this post. 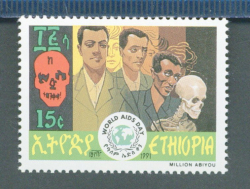 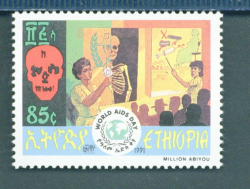 British Library, Philatelic Collections: UPU Collection, Ethiopia
The 15c stamp charts the decline of a young Ethiopian man’s heath until his death after contracting HIV and Aids. The 85c stamp depicts a lecturer teaching an unspecified audience about Aids prevention. 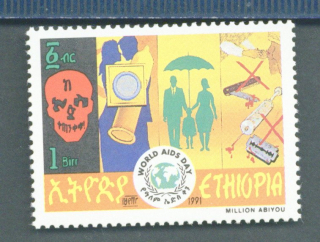 British Library, Philatelic Collections: UPU Collection, Ethiopia
This 1b stamp depicts preventative measures to reduce the risk of contracting HIV and Aids, including practicing ‘safe sex’ as well as avoiding needles, razors and other items containing blood possibly contaminated with HIV and Aids. It also depicts a family sheltered underneath an umbrella symbolising protection. 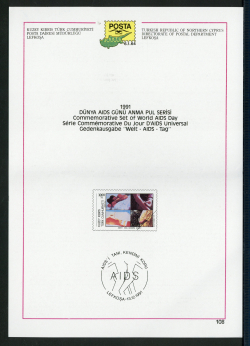 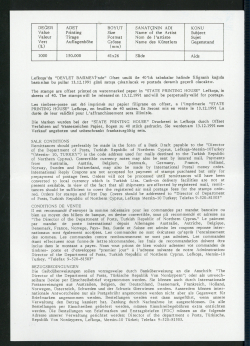 British Library, Philatelic Collections: Publicity Material, Cyprus
On 13 December 1991, the Turkish Cypriot Post issued a 1000 TL stamp commemorating World Aids Day. Designed by Sanatcinin Adi it depicts four different sources of infection including safe sex, drug, transmission of infected blood and an unborn baby contracting the disease of an infected mother. The British Library’s Philatelic Collections does not hold an example of the stamp but does have the publicity leaflet released by the Postal Authority containing information on its manufacture, production and sale. 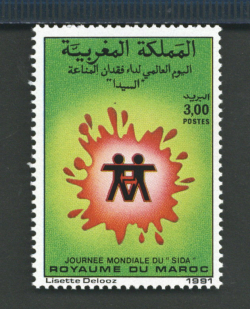 On 31 January 1992, Kenya issued four stamps lithograph-printed by Cartor as part of an Anti-Aids Campaign. Each one has a separate design created by designer H. Mogul. 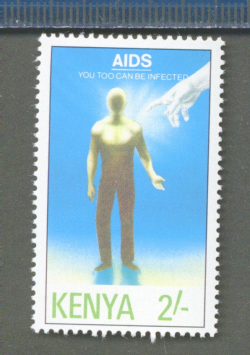 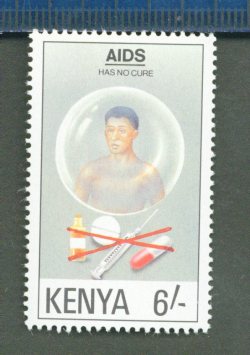 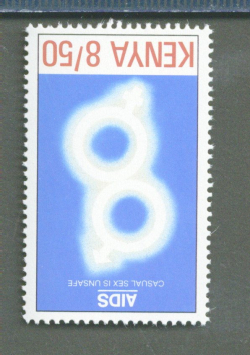 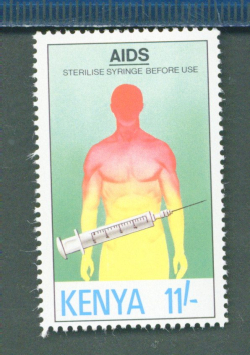 British Library, Philatelic Collections: Crown Agents Philatelic & Security Printing Archive, Kenya
This 8/50 stamp depicts the male and female symbol representing a heterosexual couple accompanied by the statement ‘AIDS. CASUAL SEX IS UNSAFE.’ The 11/- stamp depicts a generic male figure standing behind a hypodermic syringe in the foreground with the text ‘AIDS. STERILISE SYRINGE BEFORE USE.’ 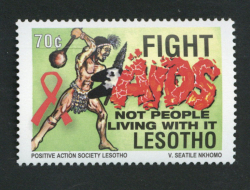 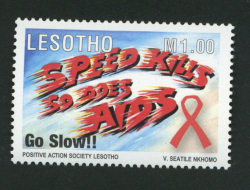 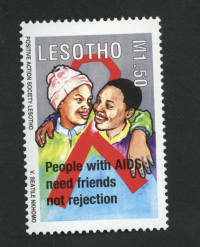 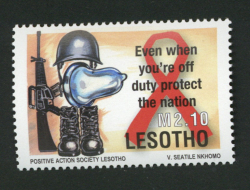 British Library, Philatelic Collections: General Collection
The 1m.50 stamp depicts two women with the statement ‘People with AIDS need friends not rejection’; and the 2m.10 stamp illustrates a rifle, military helmet, unused condom and boots beside the text ‘Even when you’re off duty protect the nation.’ 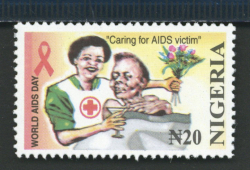 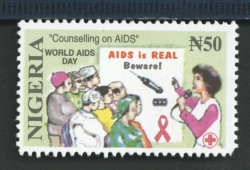 British Library, Philatelic Collections: Crown Agents Philatelic & Security Printing Archive, Nigeria
The 20N stamp illustrates a nurse tending to a seriously ill patient accompanied by the text ‘Caring for Aids victim.’ On the left side of the stamp can be seen the iconic World Aids Day ribbon. Meanwhile, the 50N stamp depicts a woman using a microphone addressing a crowd whilst gesturing towards a poster with the text ‘AIDS is REAL Beware!’

The philatelic materials discussed from Africa, Asia and the Middle East show how important stamps are in researching consistent contributions from the BAME community towards art and design. An obvious question remains: where is the original design and artwork located? Sadly, it is impossible to answer this question at present. We suspect such artwork and design material will exist within various official archival and unofficial private collections scattered globally. As its cultural value becomes increasingly recognised, the locations of such material will hopefully become known.

According to the Bill and Melinda Gates Foundation, almost thirty seven million individuals around the globe live with the HIV virus whilst nearly as many people have died from HIV-related complications, including Aids, since the 1980s. Such figures of course fail to take into account the stigma that individuals who have contracted Aids can suffer. Sub-Saharan Africa is the hardest hit region, with more than seventy percent of the world’s people living with HIV. The study of Aids can therefore extend way beyond medical science and incorporate intensely personal cultural and historic perspectives, a deserving issue demanding further research.

In addition to surveying the British Library’s Philatelic Collections, both authors conducted a wider scoping exercise to identify Aids-related material in various languages held within the British Library’s collections. From a visual and textual culture perspective, our rich holdings include journals, monographs, research papers, pamphlets, NGO publications and audio material. We call upon curators and academics to research this important subject further, to develop a resource for mainstream audiences in a more sustainable form.

Posted by Annabel Gallop at 2:22 AM