Mass reproduced for global dissemination and consumption, postage stamps play an important role in promoting awareness and raising revenues for a wide range of public health issues on the national and international stage. To mark the thirty-first World Aids Day on 1 December 2019, this two-part blog post will illustrate stamp issues from Africa, Asia and the Middle East promoting Aids awareness. It is also important to remember that numerous far-sighted postcolonial nation states commissioned national artists and designers to produce the rich visual imagery on many of the stamps now under discussion. Consequently, such philatelic material also provides important insights into Black, Asian and Minority Ethnic (BAME) contributions towards art and design, bridging the gap between art and science within a public health context and raising Aids awareness. 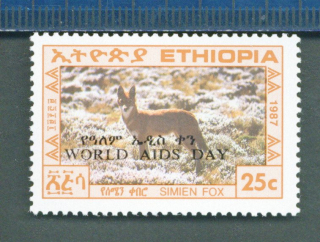 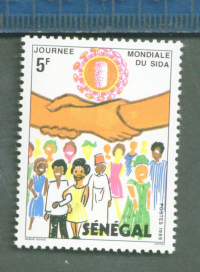 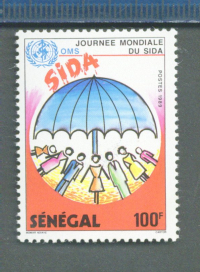 The 5f stamp depicts the Aids virus above two clasped hands, shielding people of different races. Adopting a similar theme, the 100f stamp depicts men, women and children beneath an umbrella shielding them from the French word ‘SIDA’ (AIDS) written in blood. 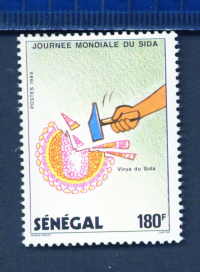 The 145f stamp depicts a sleeved arm with the UN symbol smashing and breaking up the Aids virus; likewise, the 180f stamp depicts a hand grasping a hammer that is smashing into the Aids virus.
Zaïre issued three stamps and a mini-sheet in 1989 commemorating a Red Cross Anti-Aids Campaign, produced by various African designers and printed by the English security-printing firm Harrisons & Sons Ltd. 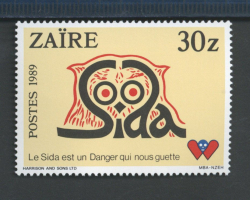 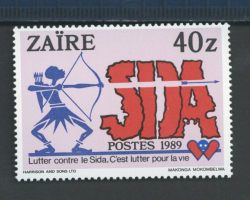 The 30Z stamp designed by Mba-Nzeh depicts the French word for Aids forming the face of an owl, accompanied with the French text ‘La Sida est un Danger qui nous quette’ (Aids is a danger that lurks). For the 40Z stamp, designer Makonga Mokombelwa produced an image of an African bowman firing an arrow through the word SIDA, accompanied with the French text ‘Lutter contre le Sida, C’est lutter pour la vie’ (Fight against Aids, it’s the fight for life). 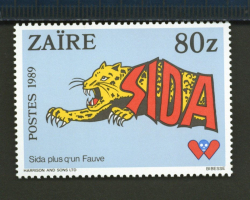 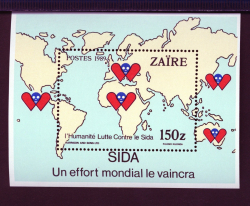 The design for the 80Z stamp designed by Bibesse depicts the word SIDA making up the body of a leopard with the statement ‘Sida plus q’un Fauve’ (Aids more than a fawn). The mini-sheet containing a 150Z stamp designed by Nkomo Nkonda comprises a map of the world dotted with the campaign logo comprising a red heart split in two by a blue skull and the statements ‘l’humanitie Lutte Contre le Sida’ (Humanity fights against Aids) and ‘Un effort Mondial le Vaincra’ (A world effort will overcome it). 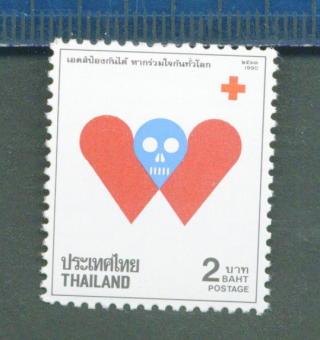 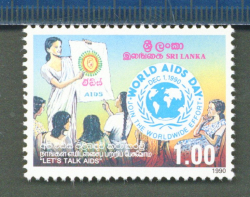 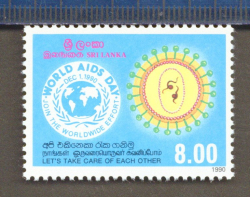 The 1 rupee stamp promotes Aids Education, depicting a female health worker talking to villagers about Aids as indicated by the poster she holds up depicting an image of the HIV virus with the word Aids in two languages. Meanwhile, the 8 rupees stamp promotes worldwide scientific engagement to combat Aids by depicting of an official emblem for the campaign next to a HIV virus. 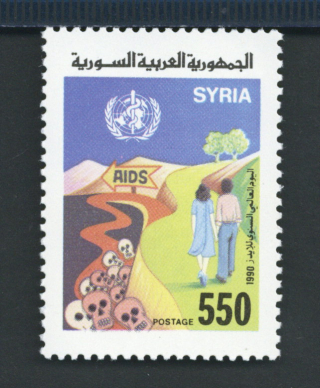 Syria issued a 500p stamp commemorating World Aids Day on 24 December 1990. The design exhorts individuals to conduct themselves in a particular manner to reduce the risk of contracting AIDS.

In the second part of this blog, to be published next week, we will feature stamps from a range of African countries incluing Ethiopia, Lesotho and Kenya.

Posted by Annabel Gallop at 2:21 AM