Rita dal Martello is completing her doctorate at UCL and has completed a doctoral placement at the British Library in November 2019.

In 2019 the Visual Arts team has been pleased to welcome Rita Dal Martello as the section’s PhD placement focusing on Chinese works on paper. Rita has primarily been working on translating, identifying and cataloguing a collection of over 300 watercolour painting of botanical subjects along with additional paintings related to Chinese furniture and interiors, methods of torture and also the Macartney Embassy to China in 1792-1794. This blog will explore some of Rita’s research related to the Chinese botanical paintings cared for by the Visual Arts team.

In 1975, a collection of Chinese botanical paintings was received from the Foreign and Commonwealth Office comprising of 6 volumes of mostly quarto-size sheets of watercolour illustrations. On four different types of paper, the majority of the paintings are on paper watermarked Whatman 1794 II or Whatman 1794 I, whilst a small percentage are on cartridge type paper and a few on a very thin paper.

The paintings are provisionally dated to c. 1800, and are by unknown Chinese artists. 234 of the paintings represent flowering plants belonging to over 60 families, which have now been identified as including Rosaceae, Orchidaceae, Rutaceae, Fabaceae, Lythraceae, Ericaceae, Theaceae, Malvaceae, Magnoliaceae, Annonaceae, Apocynaceae, Asteraceae, Myrtaceae, Paeoniaceae, and Sapindaceae families, which have multiple examples across the collection. The remaining 76 illustrations in the collection are of unidentified flowering plants.

Over half of the identified plants are Asian ornamental flowers, such as orchids, azaleas, camellias, roses, chrysanthemums, peonies, magnolias and lilies among other. 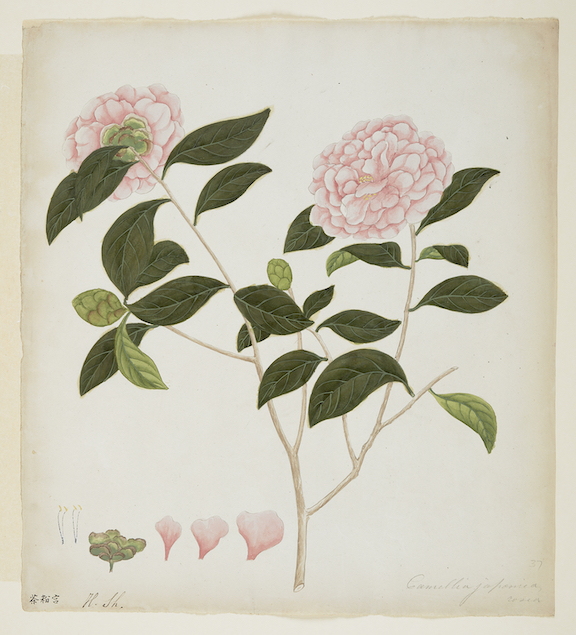 The rest of the paintings illustrate mostly Asian economic fruit and legume species, such as oranges, peaches, pears, persimmons, wampees, kumquat, litchi, longan, Bauhinia, and rosary pea among other. Finally, a few examples of Asian trees are illustrated in the later volumes of this collection, including one example of a willow tree, Japanese oaks, pines, and tallow trees. 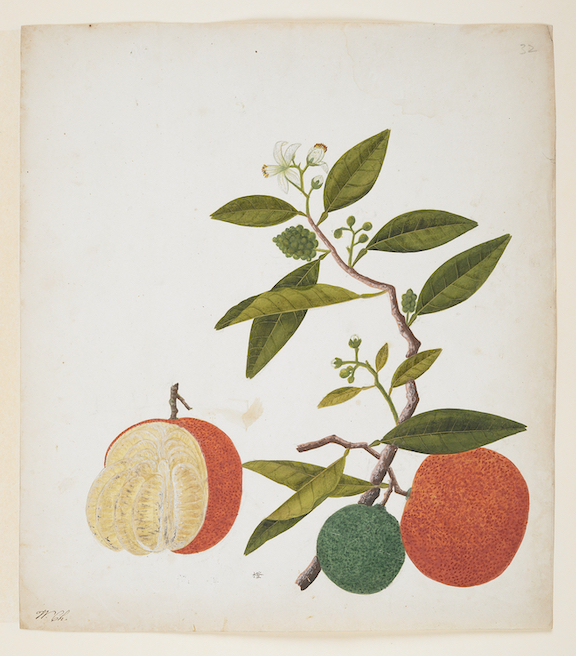 Most of the paintings show one or multiple flowering leafy branches, with fruits illustrated on a separate, smaller branch on the side. The drawings and colouring are accurate, with detailed illustration of individual petals and stamens, and veins on the leaves’ surface.

The floral and fruit dissections are meticulously illustrated on the lower corners of the paintings; individual pedicels, sepals, pistils, stamens and petals are all represented in these dissected illustrations; for fruit dissections fleshy interiors and seeds are often represented both within the fruit and separately on the side, often dissected themselves. Leaves, flowers, and fruits are illustrated at different stages of their life cycle, including in buds, at full bloom, and decaying, as well as immature and mature for fruits.

The depiction of floral and fruit dissections was becoming the norm in botanical paintings and allowed botanists to accurately identify different plant species from illustrations rather than from living or dried specimens, which could die or become damaged in transit.

At least one third of the paintings present visible pencil underdrawings; these most often represent changes in the final painted outcome, but rarely whole flowers and fruits are drawn in pencil on front and have not been painted. One instance of upside-down pencil sketches mirroring the front painting is found on the reverse of NHD56/49.

Numerous inscriptions are present on the front and reverse of the paintings. On the front, these usually include a set of Chinese characters, written in ink either on the lower right or lower left hand corner; these typically relate to the Chinese common name of the illustrated plant, some have folkloristic names which have now become obsolete. On the front, always written in ink on the lower left hand corner, there is one of two sets of initials – ‘W. Ch.’ on 152 paintings, and ‘H. Sh.’ on 129 paintings. Additionally, about a third of the paintings also have Latin plant names, rarely with English translation, written in pencil on the front lower right hand corner.

On a number of paintings, flowering times are indicated through Chinese characters written in ink on the reverse lower left hand corner; this is present only in paintings that bear the front inscription of H. Sh.; flowering times are given in individual months, and these match current known flowering times of the species illustrated in South China.

During my time at the British Library, I spent many hours transcribing and translating all the different inscriptions on the paintings, including updating plant Latin names according to the most recent scientific knowledge. I also compared the British Library collection with other Chinese botanical paintings such as the William Kerr collection held at the Royal Botanic Gardens at Kew, as well as consulted online and printed Chinese floras. This allowed for the accurate taxonomic identification of many of the plant depicted which were previously catalogued as unidentified botanical illustrations. This will enhance greatly future research and discoverability of this collection.

The records of each individual painting, including detailed information regarding plant species depicted (both common English names and Latin names when available), painting composition, and inscriptions (both front and reverse) can be found on the British Library Explore Archives and Manuscripts catalogue, by searching for the specific references of the collection (NHD52, NHD53, NHD54, NHD55, NHD56, NHD57), or otherwise by searching for specific plant names.

These paintings are also available for consultation on appointment only, through contacting the Asian and African Studies Print Room Staff in advance.