Christmas from Bethlehem to Bethnahrein

On December 25, Christians around the world (except most Orthodox Christians) will mark the birth of Jesus Christ, whom they believe to be the son of God and the Messiah. Jesus, who was born in a manger in Bethlehem, grew up speaking a dialect of Aramaic, once the lingua franca of West Asia. The Gospels, which relate Jesus’ life and teachings, were written in Greek, but the language that Jesus spoke continued to be used long past his death. Aramaic gradually evolved into various languages, with different speech communities surviving to the present day, albeit none of them in the vicinity of Jesus’ birthplace. Linguistic retention has been most tenacious in Mesopotamia, known as Beth-Nahrein (ܒܝܬ ܢܗܪܝܢ; "Between the Rivers"). For those groups that still speak it, language and culture continue to be important aspects of identity, including in the birthday celebrations of the world’s most famous Aramaic speaker, Jesus of Nazareth.

A recording of a 2016 Assyrian Church of the East Christmas celebration in Baghdad. (YouTube, uploaded by Rev. Shmoel Maqdis)

From the 1st century CE, an Aramaic language, Syriac, rose to become an important vehicle for Christianity and Christian philosophy in the Middle East. Based on the dialect of Urfa (Edessa/Εδεσσα in Greek, Urhoi/ܐܘܪܗܝ in Syriac), it has been used continuously by Syriac Christians in their liturgy and theological writings, as well as their secular histories and literature, for over a millennium and a half. Syriac Christianity is a rich and varied collection of faith practices, one that incorporates some 11 different churches of various theological and cultural orientations. Some, such as the Syriac Orthodox Church, are in communion with the Armenian, Coptic and Ethiopian Orthodox Churches. The Syriac Maronite Church and the Chaldean Catholic Church are in communion with the Catholic Church based in Rome. Other groups, such as the Assyrian Church of the East, are completely independent of broader structures, while the Mar Thoma Syrian Church of Kerala, India is in communion with the Anglican Church. What they all have in common, however, is their use of one of two Syriac rites, continuing on the religious significance of this Aramaic dialect, even in communities where it was never spoken as a daily language. 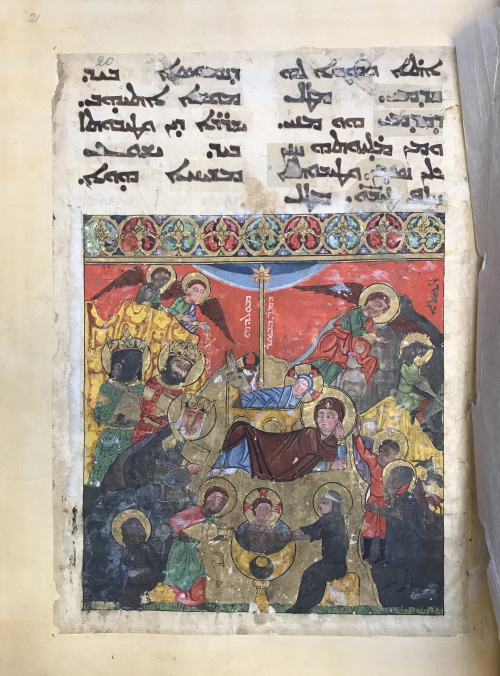 An illustration of the Nativity from a 13th century Syriac lectionary copied in Syria or northern Iraq. (Syriac Lectionary, Add MS 7170)

It should be no surprise, then, that Christmas too is described and celebrated in this linguistic relative of Jesus’ speech, whether in India, Lebanon, Iraq, or among the diaspora. The story of Jesus’ birth is found in the Peshitta, or simplified Syriac translation of the Gospels. Just as in the King James Bible, the Peshitta version provides us with a description of the manger in Luke 2:1, while Matthew 2:11 tells of the visit of the Magi. The British Library holds one of the largest and richest – if not the largest and richest – collections of Syriac manuscripts in the world, which include many copies of the Peshitta. Given the importance of the birth of the Christian Messiah as a milestone in Christian history, some of the works within our collections contain beautifully illuminated and illustrated narrations of the Nativity. One of the most spectacular depictions of the event comes from the manuscript Add MS 7170, a 13th century Lectionary that was copied in northern Iraq near the city of Mosul. The painting shows the Virgin Mary and the infant Jesus lying side by side and watched over by angels, while the Magi arrive bearing gifts. Their presence in a manger is noted by the fact that both a donkey and an ox look down upon the infant, just as enraptured by his being as the humans. 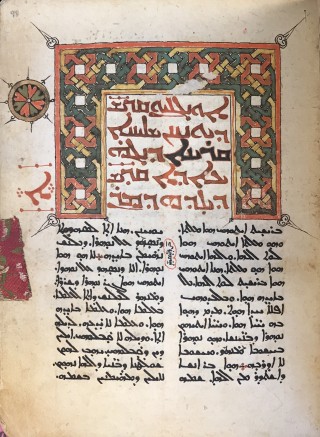 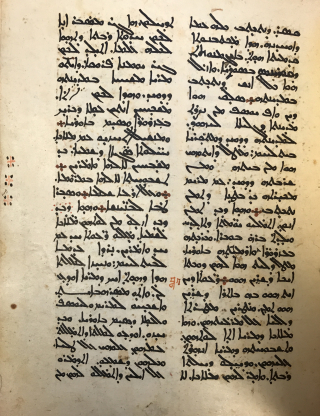 The start of the Gospel of John, with instructions that it is to be read for Christmas, as well as the story of the Nativity in the Gospel of Matthew, from a 15th century Peshitta from Tur Abdin, Turkey (Peshiṭtā, Or. 14365).

The story of the Nativity appears in all of copies of the Peshitta that contain all four of the Gospels, just as it does in all versions of the New Testament copied or published in other languages. As time went on, not only the event but its commemoration too became an important part of organizing the teachings and life of the Church and its faithful. In addition to the passages in both Luke and Matthew, whole sections of the Gospels were assigned for reading during the Christmas season. Excerpts from Or. 14365, a 15th century manuscript produced in Tur Abdin, Turkey, show not only Luke 2:1-10, telling the story of the Nativity, but also the header of the Gospel of John, which is intended to be read at Christmas. It features an intricate geometrical pattern of interlacing red, green and yellow bands, and is accompanied by a cloth thumb-tab, indicating that this section was indeed meant to be found and actively read by literate believers. Christianity has been a cornerstone of Aramaic-speakers’ identities right up to the present. As Adam H. Becker has explored in his book Revival and Awakening: American Evangelical Missionaries in Iran and the Origins of Assyrian Nationalism, the 19th century brought an onslaught of American and British Protestant missionaries to northern Iraq and western Iran. This added a new layer to the relationship between history, language, religion and ethnicity in the region. European and American insistence on linking the ancient Assyrian Empire with contemporary Aramaic speakers, as well as the importation of European Christmas traditions, allowed for new means of celebrating the holiday alongside traditional ones. The British Library holds small but notable collections of contemporary poetry and prose works in Classical Syriac as well as the neo-Aramaic languages Turoyo and Swadaya. Within these, some include works dedicated to the celebration of Christmas. Writing targeted at children is especially rich with examples, as the holiday – beloved by children – also provides a good opportunity to teach these endangered languages to future generations. Some poems come with imagery that is clearly influenced by Western European symbolism, including Christmas trees and a portly, jolly and bearded Santa Claus. In mid-20th century works, such as the pamphlet above produced in Tehran, this is a reflection of the influence of British and American missionaries in the homeland of many neo-Aramaic speakers. Christmas stories were translated from English into the Swadaya dialect of the Urmia Region, ensuring a transfer of Euro-American Christmas traditions and symbols to a part of the Assyrian people. 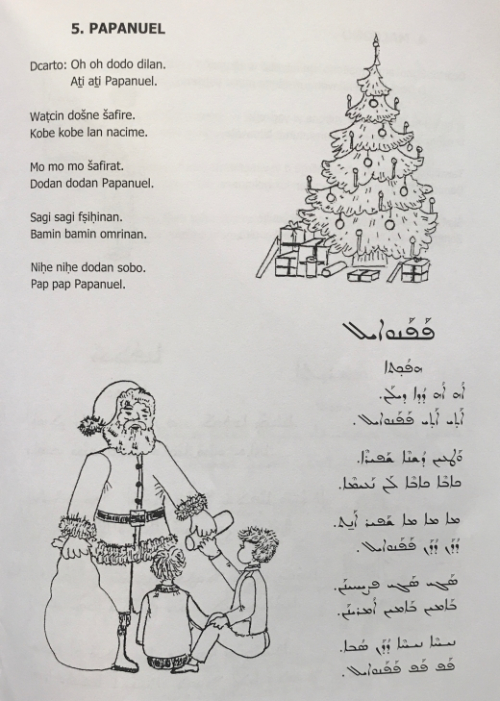 The gradual infiltration of European ideas about Christmas also occurred because of the geography of Syriac Christian communities. Although originally from West Asia, more people who identify as Assyrians or Syriacs might live in the diaspora than do in the homeland. Conservative guesses are that half the community live outside of West Asia, with the United States and Sweden the largest populations. The British Library’s collections feature numerous works published by authors or community groups in Sweden, the Netherlands and Germany, many of them focused on the preservation and promulgation of culture and language. The example above, sourced from the Netherlands, shows the use of images familiar to anyone who might have grown up in Western Europe or North America, alongside a Turoyo song about Father Christmas. 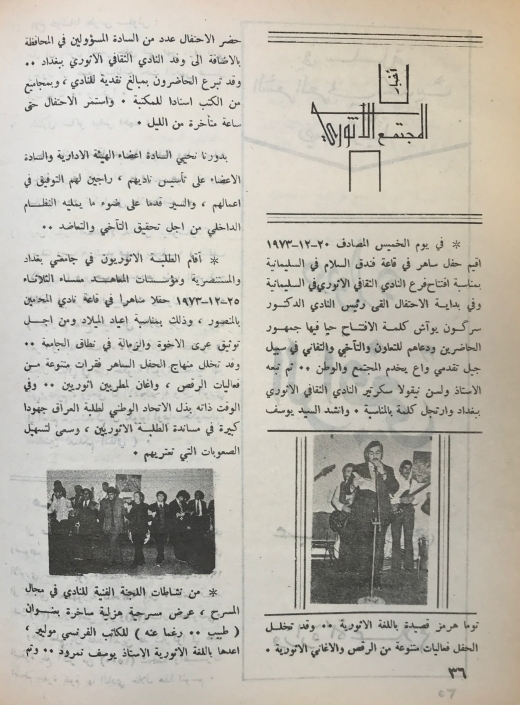 In the homeland, Christmas continues to be celebrated and woven into contemporary culture, despite the numerous pressures exerted on Aramaic speakers to go into hiding or depart. In the 1970s, the Assyrians of Baghdad openly celebrated Christmas as a group event, as seen in the community news section of the periodical Múrdinā Aturāyā (The Educated Assyrian). In December 1973, female Assyrian students marked the occasion with a party that included dance and song, among other entertainment. Christmas was not only a chance to mark the passage of time and to celebrate the birth of Christ, but also an opportunity to take stock and look towards the community's future.

The Iran-Iraq War, decades of sanctions, unrest in the south-east of Turkey, and, eventually, the rise of Islamic State in Syria and Iraq have all led to a drastic reduction in the presence of Syriac Christians in their homeland, as well as the celebration of Christian festivities there. Nonetheless, communities remain, and occasionally grow, allowing for Christmas Mass to be sung across the region. This year, too, the Nativity will be celebrated, in Syriac, in churches from Ainkawa to Adelaide, Mardin to Malmö, and Qamishlo to Kerala. Neither time nor distance can erase the sense of hope and yearning for peace represented by the celebration of Christmas.