The Avar Miscellany, a rare manuscript from the North Caucasus: (1) Historical background

The first appearance of Muslims in the Caucasus region dates back to the first century of the Islamic era; but their presence developed gradually over many hundreds of years. The variegation of Islam as practised in this region reflects the divergence of cultural and other traditions between the peoples of a land where immense peaks and valleys separate neighbouring communities whose languages are often not mutually intelligible, but where Arabic has long acted as the common language of the learned.

In the nineteenth century, as in the twentieth, the northern regions of Caucasia, including Chechnia and Daghistan, were frequently riven by conflict. For a few short years in mid-century, while the Imperial Russian Army was engaged in the Crimean War against Britain and her allies, the pressure on the Chechens in their forests and the Daghistanis in their mountain fastnesses was relaxed to a certain degree. Yet they were unable to profit to any great extent from the situation, at least partly because of limitations on communication with the outside world.

That short-lived respite is, however, reflected in the existence of a very special survivor, now preserved in the British Library as Or. 16389: a manuscript of great rarity. This manuscript was previously MS. 39 in the collection of C.S. Mundy, a British Turcologist who was a lecturer at the School of Oriental and African Studies, University of London. Many of the most important items in Mundy’s manuscript collection were eventually acquired, in uneasy instalments, by the British Library. His books, regrettably, were entirely dispersed; Graham Shaw, former Head of Asian and African Collections, noticed some of them on sale on a street stall in Greenwich, southeast London. 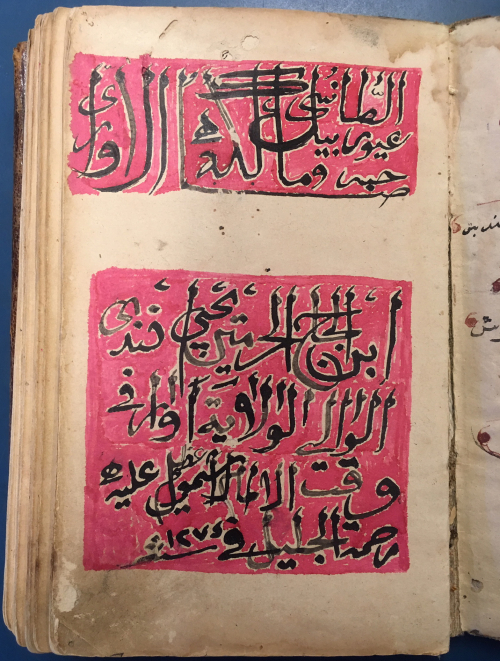 The Avar Miscellany, as BL manuscript Or. 16389 has been named, is a majmū‘a (or in Turkish mecmua), or composite volume, of Islamic religious texts in Arabic, Ottoman Turkish, and Avar, one of the languages of the Northeast Caucasus region. It was copied for al-Amīr al-Muhājir Dāniyāl Sulṭān by Ghāzī Muḥammad in 1270/1853-4. According to an inscription in Arabic on f. 84v, the manuscript was given to Dāniyāl in that year by a man named Muḥammad Beg al-Ākhidī (or al-Āżidī?) who describes himself as al-gharīb al-ghabī, literally meaning ‘the strange’ (or, perhaps, ‘the stranger’), ‘the stupid’. The calligraphed main ex libris page (f. 1r) with highly distinctive ornamentation in puce and black – a rather surprising colour scheme, found also on the second ex libris page (f. 8r) – states that this volume was owned by (ṣāḥibuh wa mālikuh) Ghayūr Beg al-Ṭānusī al-Awarī, son of Ḥājj al-Ḥaramayn Yaḥyà Efendi. Surprising, too, is the latter’s title, which means ‘Pilgrim to the Two Sanctuaries’). Although most Ḥājjīs visit Madīna as well as Makka, that visit does not count as part of the Ḥajj. Possibly he had also visited Jerusalem, which for Greek Christians at least gave them the right to prefix their names with the epithet ‘Khatzi’. Another interesting feature of the volume is the binding, which is in brown goatskin and is broadly similar to medium-quality Ottoman bindings of the period. The front and back covers, and also the spine, contain impressed inscribed cartouches. Those on the right, as one looks from the side, contain a name which begins ‘Mullā Muḥammad’; this is followed by a name which is probably a nisba, or affiliation name, connected to a place or region. Those on the left appear to begin with the words ‘Ṣāḥib hādhā’ (‘The owner of this…’) and to end with the name ‘Mullā ‘Alī’. These readings are altogether tentative. More adept readers will, one hopes, be able to solve these epigraphic puzzles. 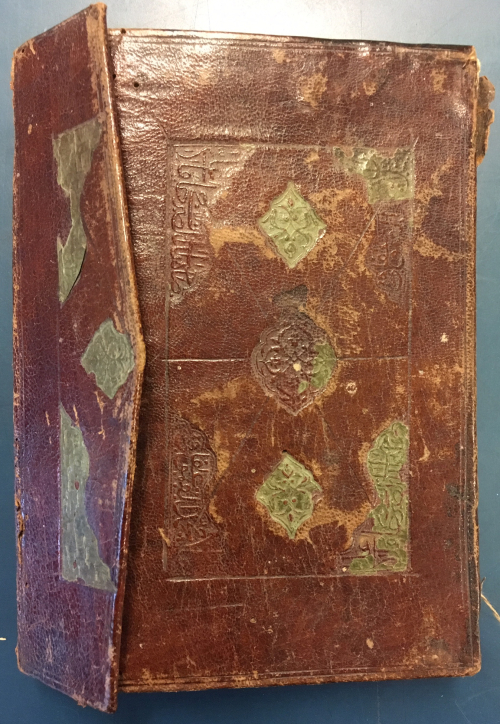 Binding of the Avar Miscellany, with inscribed cartouches. British Library, Or. 16389

Several different copyists seem to have been involved in the production of this manuscript, at one stage or another. Ghayūr Beg himself appears to have copied two of the brief texts included in the volume. The text describes him as governor (vālī) of the Avaria region of the Caucasus in the time of Imam Shamū’īl (1797-1871), commonly known as Imam Shamyl, the overlord of Daghistan and Chechenia (and leading shaykh of the Naqshbandī Sufi Order there) from 1834 to 1859. The actual situation, however, was not so straightforward. Ghayūr was the Imam’s nā’ib or deputy in the region of Aukh, there being other na’ibs elsewhere. Ghāzī Muḥammad, who was the son of Shamyl and the son-in-law of Dāniyāl Sulṭān, claims in this manuscript (in text 3) to be the Mujaddid, or Renewer of Islam, in his time. Dāniyāl Sulṭān, described in this volume as ‘The Commander, the Emigrant [for the Faith]’, was ruler of Elisu and a major-general in the Russian army when in 1844 he defected (this being his ‘emigration’) to join forces with Shamyl; in 1859, however, he capitulated to the Russian invading force together with all his men. By the time of Shamyl’s capture by the Russians, he considered Dāniyāl a traitor who had deserted him.

Ghayūr Beg himself (called Gairbek in Russian) came from a place called Burtuna and was among the four nā’ibs to whom Imam Shamyl addressed a stern letter dated 17 Ṣafar 1269/30 November 1852, enjoining them to be zealous in upholding Islamic prohibitions, curbing worldly inclinations, and other matters – and threatening to send representatives to investigate whether his instructions were being followed. [See Sharafutdinova (2001), pp. 120-123, 199; for an earlier (1267/1850-51) letter from Shamyl to his followers, to much the same effect, see pp. 84-85.]

The texts included in the Avar anthology reflect, inter alia, a concern to direct the Muslims of the region towards theological orthodoxy and strict observance of Sharī‘a rulings and away from the adherence to ‘urf, or local custom, which was prevalent among these fiercely independent-minded mountain people.

The second part of this blog post will describe the contents of the manuscript.

Posted by Annabel Gallop at 2:00 AM