Three fish with one head: (1) Sufi sources from Southeast Asia

This two-part blog post will examine a striking motif of three interlocking fish with one head, which is found in widely varied locations all over the world. This first post looks at examples in Javanese mystical manuscripts; in the second post, the motif will be traced from ancient Egypt through medieval France to modern Japan.

The motif of three fish with one head is familiar from manuscripts on mystical practices from Java, where it is referred to in Javanese as iwak telu sirah sanunggal, ‘three fish with a single head’.  All known examples occur in texts relating to the Shaṭṭārīyah brotherhood, a Sufi order founded in Persia by Shaykh Sirajuddin Abdullah Shattar (d. 1406) and which spread to Southeast Asia through disciples of the eminent Meccan teacher Shaykh Ahmad al-Qushāshī (d. 1660).  Presented here are a number of examples from Javanese manuscripts in the British Library and also from manuscripts still held in Java digitised through the British Library’s Endangered Archives Programme.

The earliest dateable examples of this motif from Java are in two manuscripts from the collection of Col. Colin Mackenzie, who served in the British administration of Java from 1811 to 1813. Both manuscripts containing Shaṭṭārīyah silsilah or spiritual genealogies, one of which is dated 1790, originate from Mataraman in Batavia, present-day Jakarta, situated on the north-west coast of Java. 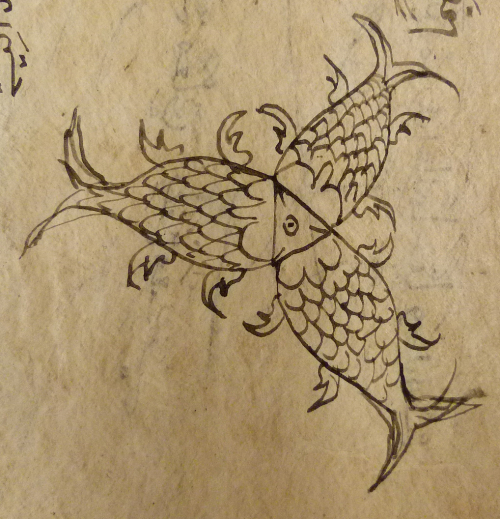 Two later manuscripts containing this motif are from Lamongan on the north coast of East Java, both of which have been digitised through the Endangered Archives programme.  The manuscripts are held in the Islamic boarding school Pondok Pesantren Tarbiyyah al-Thalabah at Kranji, near the tomb of Sunan Drajat, one of the nine wali credited with bringing Islam to Java.  In both the Batavia and Lamongan manuscripts the diagram is used to illustrate the Oneness (tawhid) of God, by visualising graphically the unity of the first three stages of the ‘seven grades of being’ (martabat tujuh), and making this reference explicit through accompanying captions:  aḥadīyah - Allāh / waḥdah - Muḥammad / wāḥidīyah - Adam. 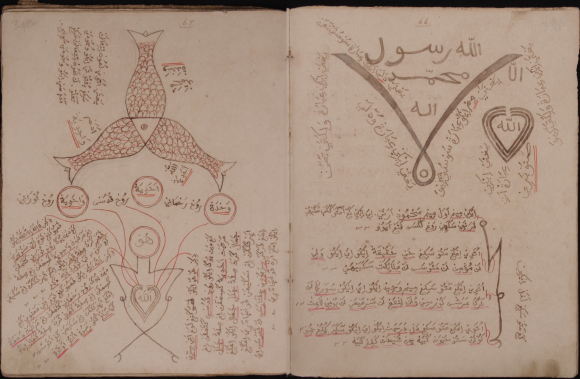 The second manuscript from Lamongan (EAP061/2/55-61), which is undated but probably also dates from around the late 19th or early 20th century, has a very finely executed drawing of the three fish with one head.  In contrast to nearly all known diagrams of this motif where the three fish are depicted identically, in the undated Lamongan manuscript, while the two fish labelled Muhammad and Adam are decorated with delicate scales, the fish labelled Allah is left plain and unadorned, most likely to reflect the 'emptiness' associated with the first of the seven grades of being, aḥadīyah. 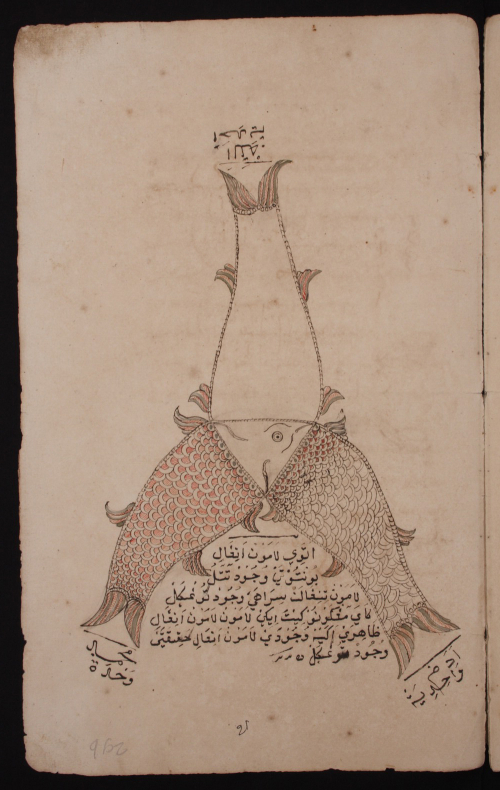 Three fish with one head in a manuscript containing Sufi texts, ca. late 19th c.; this is the only known example where the three fish are differentiated from one another visually. Pondok Pesantren Tarbiyyah al-Thalabah, Kranji, Lamongan, East Java, EAP061/2/59, f.29b   [This page has been rotated through 180 degrees to allow the reading of the Javanese text.]

According to Mahrus eL-Mahwa, who has carried out a study of this motif in the Cirebon region of north Java, there are three late-19th century manuscripts which are all copies of a text of the Shaṭṭārīyah wa-Muḥammadīyah Sufi order closely linked to the Kaprabonan court (one of the three princely houses of Cirebon which emerged from the sultanate in 1677 following a succession dispute).  In all three Cirebon manuscripts, each fish is labelled with a different descriptor of the stage represented: zat ‘ibarat Allāh - ṣifat ‘ibarat rūḥ/Muḥammad - af‘āl ‘ibarat jasad/Adam (Essence symbolising God / attributes symbolising the soul/Muḥammad / Deeds symbolising the body/Adam).  It was thus probably one such Cirebon manuscript which was cited by the scholar Karel Steenbrink in his discussion of how simple figures and diagrams were used in the Malay world to elucidate ideas about the mystical reality: ‘A quite peculiar example of this style of summarising the totality of being is that of the three fishes, as found in a 19th century Malay tract on the unity of being, according to the Shattariyah brotherhood, composed in Java. The three fishes were given the names of Essence of Allah, Deeds (af’āl) and Attributes (sifāt). The drawing symbolises the unity of the original essence and the first emanations within the divine being … When looked upon from the tails, the figures seem to be different, but in their heads, they are identical. Difference and change have disappeared as so often in the neo-Platonic reasoning that has since long dominated Islamic mystical thinking about God’ (Steenbrink 2009: 69-79).

Mahrus eL-Mawa has suggested that the iwak telu sirah sanunggal diagram has a particular association with the Shaṭṭārīyah order in Cirebon, where it functioned as a suluk or an aid to mystical practice.  There may be a particular association with court culture in Cirebon: the motif of three fish with one head is currently the symbol of the Kacirebonan, the fourth and youngest princely house of Cirebon, which was founded in 1808, while Mahrus’s research also reveals that the past five heads of the Kaprabonan court have all been initiated into the Shaṭṭārīyah wa-Muḥammadīyah order. 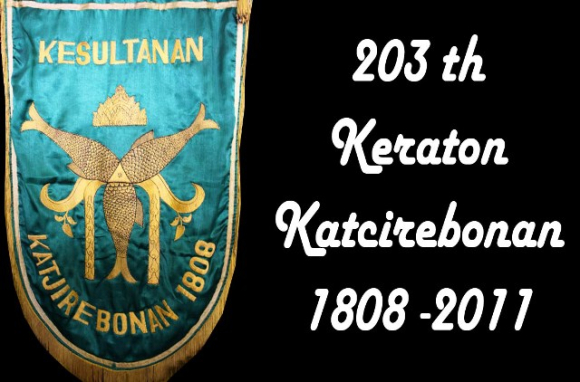 Three fish with one head as the symbol of the Kacirebonan court, Cirebon, founded in 1808. Source: Cirebon Insight, 3 June 2011

The motif does appear to be particularly strongly associated with Cirebon: in addition to its appearance in manuscripts it also occurs on batik, wood carvings  and glass paintings.  The ‘three fish with one head’ also appears frolicking alongside ‘ordinary’ fish in two separate scenes in a delightful illustrated late 18th-century Javanese manuscript of the Serat Damar Wulan probably from Cirebon; this is the only known appearance of the motif in a non-mystical manuscript, and may reflect a deep entrenchment in the repertoire of local artists . 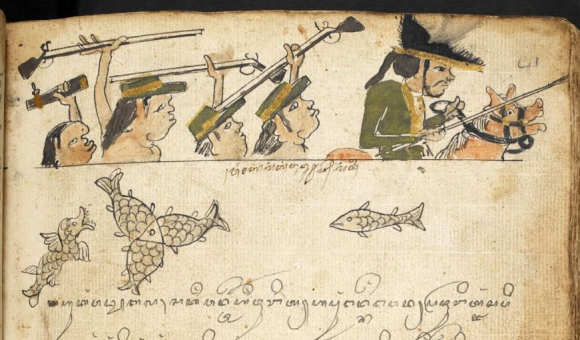 The ‘three-in-one’ fish depicted with soldiers crossing a river, in a Javanese manuscript of the Serat Damar Wulan,  late 18th century. The manuscript was given to the India Office Library in 1815 by Lt. Col. Raban, who had been Resident of Cirebon from 1812 to 1814.  British Library, MSS Jav 89, f. 41r

Yet the origin and meaning of this motif remains obscure. Even within Cirebon the diagram of three fish with one head is not found in all Shaṭṭārīyah manuscripts, while outside Java, apart from one manuscript in Malay from the Lanao area of Mindanao, the diagram is not encountered in any Shaṭṭārīyah manuscripts from other parts of the Malay world, for example from Aceh or west Sumatra, or in mystical manuscripts in Arabic, Turkish or Persian from the broader Islamic world.   The reason may lie in differing lines of transmission of Shaṭṭārīyah teachings, as traced through the spiritual genealogies (silsilah) contained in manuscripts.  A recent detailed philological study of Shaṭṭārīyah silsilah in Aceh, Java and Mindanao by Oman Fathurahman (2016) reveals four main lines of descent from Aḥmad Qushāshī, most notably demonstrating that not all adherents traced their spiritual genealogy from the famous Acehnese scholar and Sufi Shaykh ‘Abd al-Ra’ūf of Singkil (d. 1661), who is usually associated with the introduction of the Shaṭṭārīyah to the Malay world.

The proposition that the diagram of ‘three fish with one head’ used to illustrate the Unity of God is linked with one particular descent line of the Shaṭṭārīyah would explain why this motif is only found in a small number of manuscripts found along the north coast of Java, particularly centred on Cirebon.  Nonetheless it remains puzzling that the motif of three fish with one head is unknown in either manuscript or other material cultural manifestations in other parts of the archipelago and even in mainland Southeast Asia, when, as will be shown in the second part of this blog post, it has in fact an exceptionally long history in many far-flung parts of the world, dating back thousands of years. 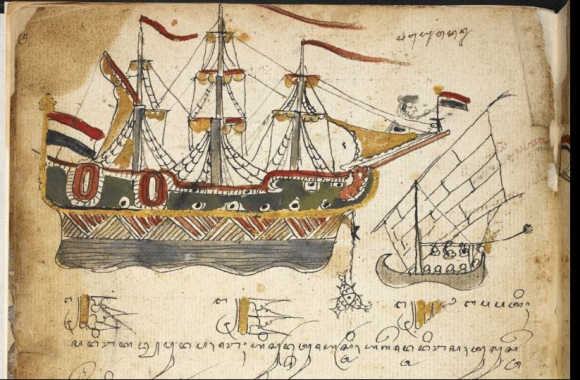 The ‘three fish with one head' depicted clustered around the anchor of a ship, at the start of a Javanese manuscript of the Serat Damar Wulan, probably from Cirebon, late 18th century.  British Library, MSS Jav 89, f. 3v

This study of the motif of ‘three fish with one head’ was initiated as part of a research project on Mindanao manuscripts coordinated by Prof. Midori Kawashima, which resulted in the publication: A.T.Gallop, Cultural interactions in Islamic manuscript art: a scholar's library from Mindanao.  The library of an Islamic scholar of Mindanao: the collection of Sheik Muhammad Said bin Imam sa Bayang at the Al-Imam As-Sadiq (A.S.) Library, Marawi City, Philippines:  an annotated catalogue with essays, edited by Oman Fathurahman, Kawashima Midori and Labi Sarip Riwarung.  Tokyo: Institute of Asian, African and Middle Eastern Studies, Sophia University; pp. 205-248.