Three fish with one head (2): from the Buddha’s footprints to Beat poetry

The first part of this blog post explored diagrams of three fish with one head in manuscripts association with the Shattariyah Sufi order in Java. In this second part the motif is traced through nearly four thousand years, from ancient Egypt to contemporary Buddhist Japan via the Beat poet Allen Ginsberg.

The earliest known manifestation of the three-fish-one-head symbol is in ancient Egypt, where it was a familar motif on ceramic dishes from the New Kingdom period between the 16th to 11th centuries BC. Representing the tilapia fish and found together with depictions of the lotus, it is associated with the Goddess Hathor. 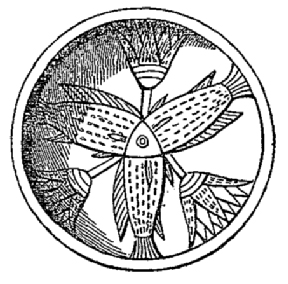 Two millenia later the motif appears well entrenched in Christian contexts in Europe: it is clearly portrayed in the famous album of Villard de Honnecourt, a French architect active between 1225 and 1250 who worked for the Cistercian Order of monks, and who left a sketchbook full of architectural drawings and geometrical diagrams now held in the. Bibliothèque nationale, Paris, MS 19093. In Christian circles the fish is a symbol of Christ, and the three fish were believed to represent the Trinity. 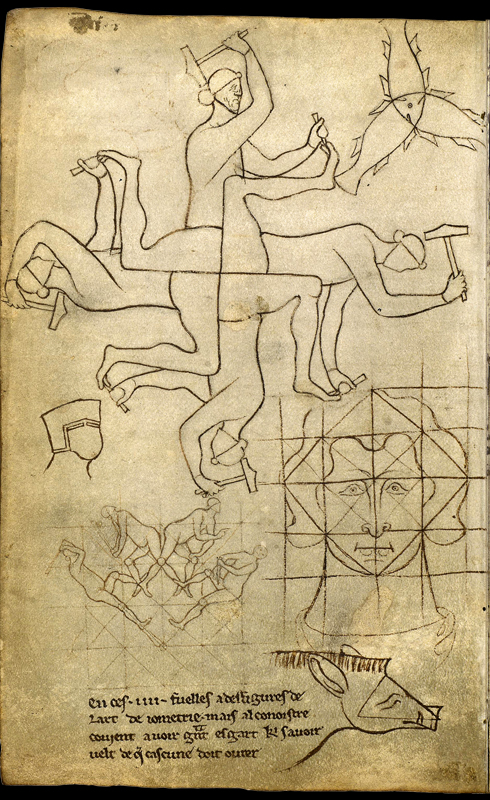 Three fish with one head, together with other geometrical patterns in the sketchbook of Villard de Honnecourt, ca. 1240.  Bibliotheque nationale, MS 19093, f. 19v.

Around the same period the motif was also known in Yuan China, as attested by a brown-glazed stoneware jar excavated at Hancheng City, and now on display at the Shaanxi History Museum in Xi'an. Intriguingly, what may be an early Buddhist use of this motif seems to have been brought to attention by the American Beat poet Allen Ginsberg (1926-1997), who adopted it as his logo.  According to Ginsberg, he first saw this symbol in 1962, engraved on a stone sculpture of the footprint of the Buddha at Bodh Gaya in India.  He describes the incident in a letter published in the Catholic Worker in May 1967, along with his sketch: ‘I saw the three fish one head, carved on insole of naked Buddha Footprint stone at Bodh-Gaya under the Bo-tree. Large – 6 or 10 foot size – feet or soles made of stone are a traditional form of votive marker. Mythologically the 32 signs – stigmata, like – of the Buddha include chakaras (magic wheels symbolic of energy) on hands and feet. This is a sort of a fish chakra.’ In 1982, Ginsberg’s sketch was reworked by Harry Smith and in this form appeared on the front cover of his books. [Source of quote and images below: The Allen Ginsburg Project: Buddha's Footprint, 1 April 2010). 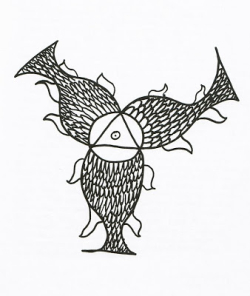 In recent years, there has been an upsurge of interest in Buddhist circles in Japan in this particular manifestation of the Buddha’s footprint at Bodh Gaya – said to be dated to the 5th century AD – and some replicas have been created; one such Buddhapada was erected in 2010 at Nanshoin temple at Kasaoka City in Okayama Prefecture. 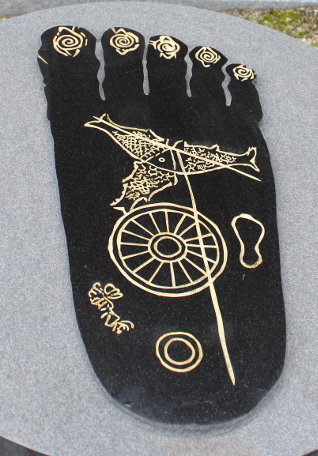 There are many unanswered questions though, for while the fish by itself or in pairs is commonly encountered in Buddhist iconography, the three fish with one head is not a standard Buddhist symbol, and the footprint at Bodh Gaya does not appear to be firmly established in the scholarly literature. Nor is the ‘three fish’ symbol mentioned in a study of footprints of the Buddha by Anna Quagliotti, who found no early stone footprints of the Buddha in Indonesia.

In fact, a different origin altogether for Allen Ginsberg’s logo is asserted by Malay Roy Chaudhury (b. 1939), one of the Bengali ‘Hungryalist’ poets of the 1960s who influenced Ginsberg during his Indian travels.  According to Roy Choudhury, it was he who pointed out to Ginsberg the design of three fishes with one head on the floor of the tomb of the Mughal emperor Akbar, and they later saw the same design in Patna Khudabaksh Library on the leather cover of a Persian book on Akbar's 'composite' faith, Din-i Ilahi, combining the major tenets of Hinduism, Buddhism and Islam (Tridib & Alo Mitra, Hungryalist influence on Allen Ginsberg, 9 May 2008). However, these references to the motif on the floor of Akbar's mausoleum and on the book binding appear just as elusive as the Buddha footprint at Bodh Gaya, for no corroborative documentation can be found.

The symbol of three fish with one head does, however, appear occasionally in a variety of later non-Buddhist contexts in India, notably in the southern region of Karnataka.  It is found on the 13th-century Hindu Harihareshwara temple in Harihar and in a flat schematic depiction on the wall of the  Bangalore Fort - fortified between the 16th and 18th centuries, latterly by Hyder Ali and Tipu Sultan - as well as in a few other visible architectural contexts linked to the Muslim ascendency in the south. 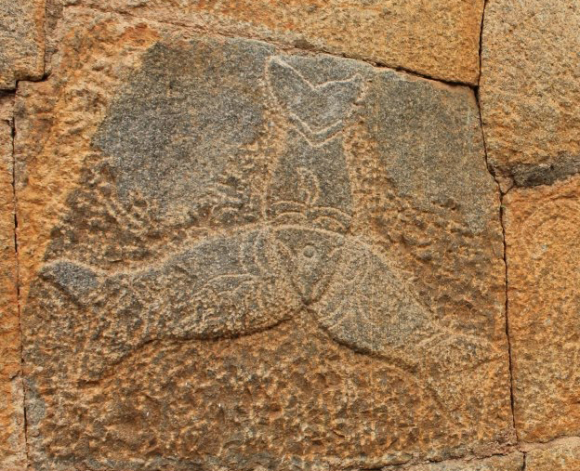 Three fish with one head, low relief on the wall of Bangalore Fort.  Photograph of 2012, reproduced courtesy of Siddeshwar Prasad, from his evocative blog, ‘Journeys across Karnataka’

In two examples from Hindu contexts - carved in stone, in the Hanuman temple in Munvalli Fort, and in a 19th-century drawing from Oudh (Awadh) of Krishna with two Gopis, standing on a lotus - the fish are depicted with wavy tails, unlike all the other straight-tailed examples shown. 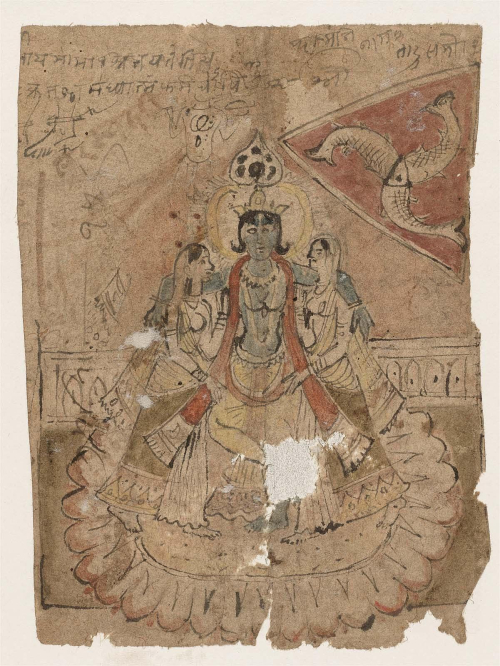 Krishna with two Gopis, standing on a lotus, with a design of three fish on a triangle, watercolour on paper, Oudh, 19th century. Museum of Fine Arts, Boston, Ross-Coomaraswamy Collection, 17.2680

Returning to Southeast Asia, the question remains about how and when this motif of three fish with one head reached Sufi circles in Java.  If it was indeed familiar as an early Buddhist or Hindu symbol, we would expect to find manifestations in pre-Islamic antiquities from Java, but none are known so far.  Perhaps the image was introduced from southern India through mystical networks, but it is also equally possible that a chance encounter with this motif resonated so deeply with one individual in the Shaṭṭārīyah chain of transmission in Southeast Asia that it was incorporated into the guidance texts. Indeed, citing the 16th-century Malay mystical poet Hamzah Fansuri, the scholar Karel Steenbrink noted the profound attachment to fish imagery in the region: ‘The fishes, of course, remind us of the frequent use of the symbolism of the ocean, the waves and the fishes in the mystical poetry of the Southeast Asian divines. […] This is imagery far away from the sand of the Arabian Desert: it developed when the Indian Ocean became an Islamic Mediterranean and the Indonesian archipelago the most populous Islamic civilisation’ (Steenbrink 2009: 70). 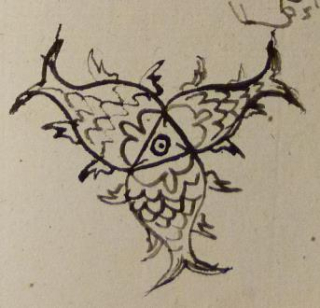 In short, just like the equally enigmatic 'three hares', the motif of ‘three fish with one head’, which may have originated in ancient Egypt, appears to have so been universally appreciated as such a perfect graphical manifestation of threefold unity that at certain times and in certain places it has been appropriated by almost every great world religion – Christianity, Buddhism, Hinduism and Islam – yet without ever having evolved into a recognized essential component of the respective religious iconography.

This study of the motif of ‘three fish with one head’ was initiated as part of a research project on Mindanao manuscripts coordinated by Prof. Midori Kawashim, which resulted in the publication: A.T.Gallop, Cultural interactions in Islamic manuscript art: a scholar's library from Mindanao.  The library of an Islamic scholar of Mindanao: the collection of Sheik Muhammad Said bin Imam sa Bayang at the Al-Imam As-Sadiq (A.S.) Library, Marawi City, Philippines:  an annotated catalogue with essays, edited by Oman Fathurahman, Kawashima Midori and Labi Sarip Riwarung.  Tokyo: Institute of Asian, African and Middle Eastern Studies, Sophia University; pp. 205-248.

Following the publication of Part 1 of this blog post, through Twitter I was alerted to the images of the Yuan jar and the drawing of Krishna shown above, for which I would like to thank Alfan Firman @alfanfirmanto and Sanjeev Khandekaar @Chemburstudio.