Sacred images made to be trampled on: kami fumi-e from Japan

In this guest post, Dr Pia Maria Jolliffe, who teaches Japanese history at the University of Oxford, and Mahli Knutson, a student of International Politics and Economics at Middlebury College, Vermont, investigate whether a mysterious image recently acquired by the British Library was really an original item used to test the faith of Japanese Christians during the Tokugawa period (1603-1867). 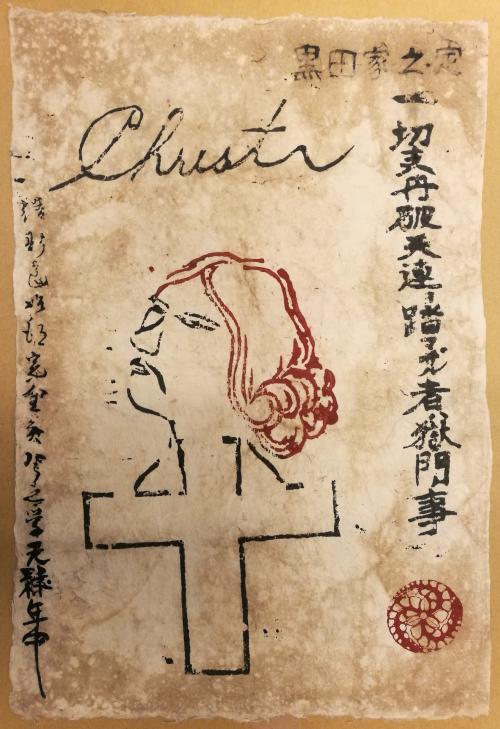 The image in the British Library was sold as a kami fumi-e, or paper image made to be trampled on, supposedly used in the systemic persecution of Christians stemming from Tokugawa Ieyasu’s 1614 anti-Christian edict. Indeed, from around 1634 onwards men, women, girls and boys were required to gather for annual ceremonies in which they were asked to trample (fumu) on images (e) depicting the Passion of Jesus Christ. Even the sick and bedridden had to commit this act of blasphemy and images were carried into their homes (Kataoka 2014: 48; Marega 1939: 281, 285). In this way, the authorities hoped to identify Christians who were supposed to refuse to blaspheme against what is considered most holy in their faith.

The material of these images changed over time. Whilst the images preserved today are mostly made of brass, there also existed images with wooden frames and some made of paper (Yasutaka 2018: 242). The image recently acquired by the British Library claims to be one such paper image from the mid-Genroku era (i.e. around 1697). Many other versions of this image exist in places such as at the Ricci Institute for Chinese-Western Cultural History at the University of San Franscisco*, at the 26 Martyrs Museum in Nagasaki and at Seinan Daigakuin Museum in Fukuoka, as shown below. 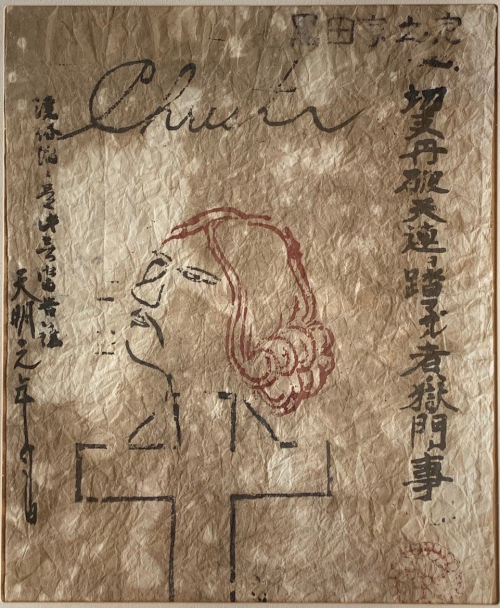 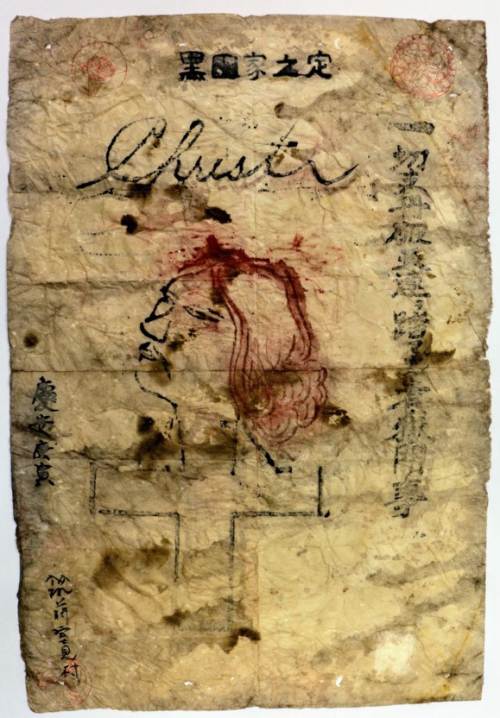 Image 26 Martyrs Museum (Nagasaki), no shelf mark, claims to be from the year Keian Kōin (1650) (permission granted by Domenico Vitali SJ, director of the Museum)

Although the item now in the British Library claims to be from the mid Genroku era, there are good reasons to assume it is a replica from a later period. Indeed, Japanese scholars who have analysed the phenomenon of paper fumi-e suggest that it is difficult today to distinguish “real” copies (produced during the Tokugawa period) from fake copies (produced after the ban on Christianity was lifted in 1873). For example, Kataoka discussed the occurence of such images as long ago as 1979. He noted that he saw different versions of these image at three different times. At one point, in 1965, even in the house of the Kiyama family whose ancestors were village headmen (shōya). Kataoka (2014: 41) provides an image of the house and notes that the then head of family told him that the image has belonged to the household ever since it was created (monogokoro tsuita koro). Because fumi-e procedures happened in the Kiyama household, one supposes that the paper image with a male head on a cross had been used as a kami fumi-e. More recently, Yasutaka (2018) also commented on the occurrence of this image. In his view most of these images are reproductions that have either been made in the Edo Period itself or afterwards to satisfy the demand for “Kirishitan” objects in a so-called Kirishitan boom. Moreover, there are replica that have been produced for contemporary museums (Yasutaka 2018: 241-242). For example, the museum of Seinan Gakuin University holds such a replica (shown below) which was supposedly reproduced in the Meiji period as a souvenir for foreigners. In a comment on this piece, Mr Churei of the Seinan-Gakuin Museum, suggests that it is quite unlikely people during the Tokugawa period were asked to trample on paper showing the kamon (emblem) of the influential Kuroda family (Churei 2017). This comment is also relevant to the image obtained by the British Library which also shows the emblem of the Kuroda family. 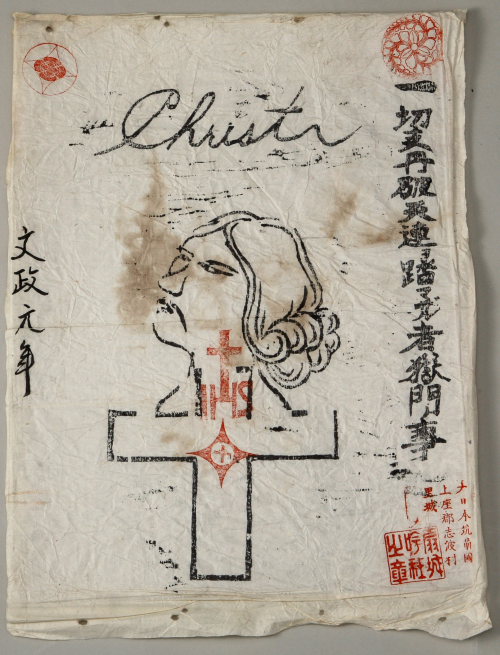 Image at the Seinan Gakuin University Museum (Fukuoka), claims to be from Bunsei Gannen (1818), shelfmark N-b-005 (permission granted by Shimozono Tomoya, curator of the Museum)

The second mystery of this image lies in whether it is a fumi-e at all. Indeed, there is the possibility that these images may not have been used as fumi-e. Instead, they are likely to depict the severed head of a Dutchman who refused to “trample on” (or object to?) Christian priests. How did we get this idea?

First of all, the text on the right hand side suggests this. Here, above the kamon of the Kuroda family, we can read: 黒田家の定一切支丹破天連ヲ踏マザル者ハ獄門ノ事 (Kuroda-ke no sadame (jō). Hitotsu Kirishitan Bateren wo fumazaru mono ha gokumon no koto) which can literally be translated as “1. Decree of the Kuroda family: Those who don't trample on the Christian bateren will be punished by gokumon [exposure of the severed head for several days”.

Gokumon (“gate of the gaol”) was a punishment that consisted of the public exposure of a severed head. Before the 17th century, a severed head was sometimes hung above gaols. During the Tokugawa period, however, the severed heads of those sentenced to gokumon were taken from the gaol (where the beheading took place) to an official execution ground. There, the severed heads were left on a stand for a couple of days, as a kind of humiliation beyond death, as shown in the illustration below. 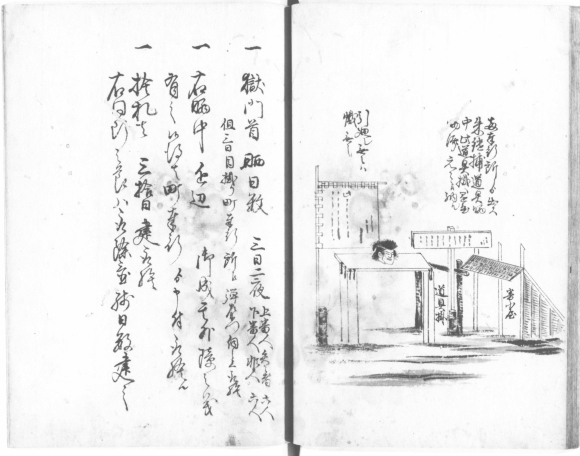 It is also noteworthy that this punishment was more common than burning at stake or crucifixion which were two severe punishments for Christians (Botsman 2005: 20). Is it likely that the image of the British Library is about a Dutchman who was sentenced to gokumon for not trampling on (or opposing) Christian priests?

Why do we think it may be the depiction of a Dutchman? It is the red curly hair of the depicted person that makes us wonder whether it is a Dutch person’s head that is depicted here. During the Tokugawa period, Dutch people were generally referred to as kōmō jin (紅毛人, red -haired people) and Edo popular literature accordingly portrayed Dutch men with curly red hair. 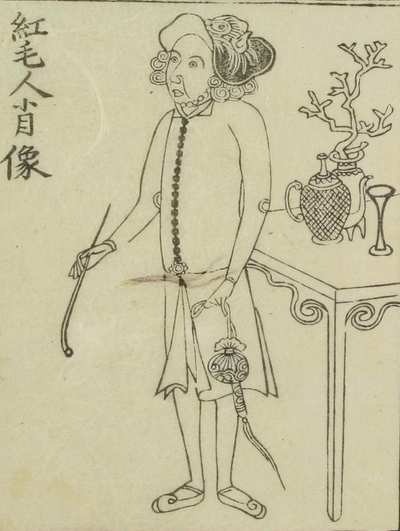 In sum, through the acquisition of this doubly mysterious item, the British Library has joined the community of other institutions that hold images of this kind. Whether these are “real” Tokugawa period or “fake” Meiji period kami fumi-e images is an interesting question and the answers give different but nonetheless fascinating information about the history of Christianity in Japan. Likewise, interpreting the images as depictions of a Dutchman who was punished for not being in opposition to Christian priests opens up a series of new questions.

We are very grateful to Alessandro Bianchi, Hanaoka Kiyoko, Miyata Kazuo and Hamish Todd for commenting on earlier drafts of this paper.

* Since 2022 the Ricci Institute for Chinese-Western Cultural History has been housed at Boston College.

Posted by Annabel Gallop at 2:35 AM