The Vessantara Jataka on the move

This is the ninth of a series of blog posts accompanying the British Library exhibition on Buddhism, 25 Oct 2019 – 23 Feb 2020.

Stories about the Buddha and Buddhism are depicted not only in illustrated manuscripts, but also in other media such as wall paintings, vertical hangings and thousands of long, painted, narrative scrolls that are part of the Lao and Thai-Lao tradition. These scrolls, found in Laos and Northeast Thailand, usually depict the story of Prince Vessantara, the penultimate incarnation of Prince Siddhartha. Prince Vessantara’s life was dedicated to donating whatever was requested of him, most notably the gift to beseeching Brahmins of the white elephant that ensured the prosperity of his own kingdom. Later, while Vessantara was in exile due to this gift, the Brahmin Chuchok, who lived as a beggar, asked for his children, while the god Indra, disguised as Chuchok, asked for his wife. 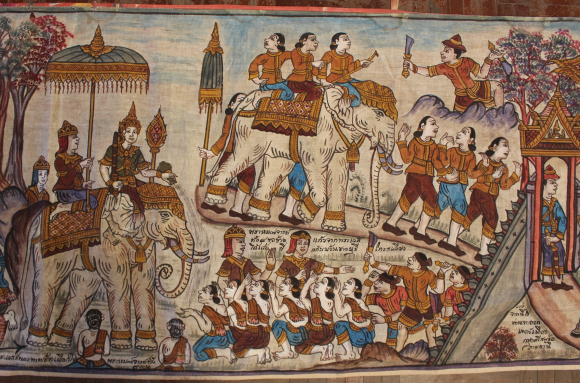 Vessantara’s gift of the white elephant, illustrated on a scroll from Kalasin, Thailand, 1975. At the lower left, Prince Vessantara pours water onto the eight Brahmins, sealing the gift of the white elephant. On the upper right, the eight Brahmins ride the elephant out of the city’s gate, threatened by a soldier disputing the gift’s authenticity. Photograph by Leedom Lefferts, courtesy of Ajaan Somroay Yencheuy. 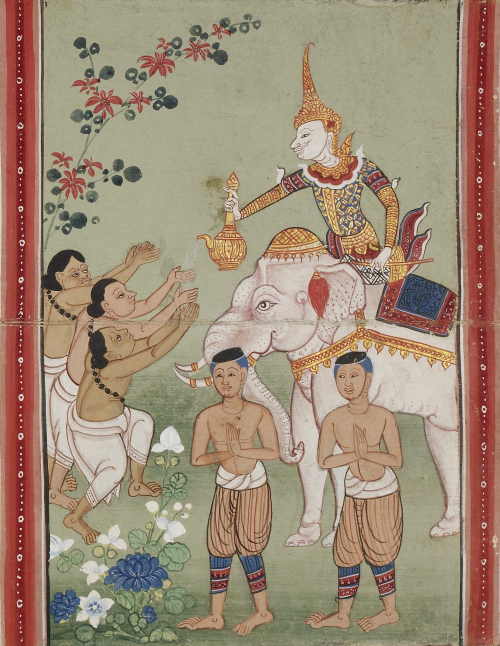 Scene of Vessantara sealing the gift of the white elephant by pouring water onto the hands of the recipients. Illustrated in a Thai folding book containing extracts from the Tipitaka and the Mahabuddhaguna. Thailand, 19th century. British Library, Or. 16552, f. 24

Dr. Sandra Cate and I have termed these long painted scrolls – which are about a meter wide and can extend from 15 to 45 and more meters in length – “murals on the move”, because they translate the Vessantara story painted on the walls of Buddhist temples (wat) into a portable version, and parade it through the community to display it. We can also see these scrolls as “manuscripts on the move”, not only because most have captions and other details written on them to explain the story, but also because the painting itself allows people to “read” the story in its narrative totality. 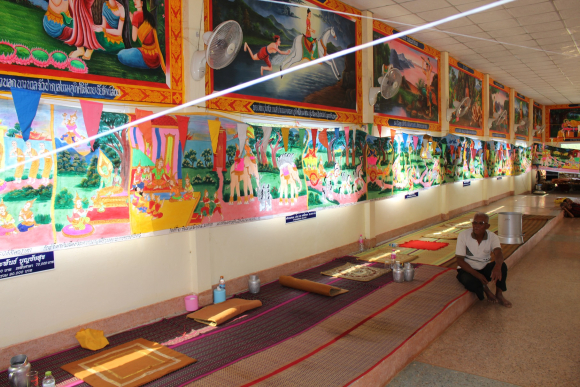 A painted scroll of the Vessantara Jataka is shown hung below a mural painting of the Last Ten Jatakas. Photographed at a temple in Buriram, Thailand, 2016, by Leedom Lefferts

Illustrated manuscripts are rare outside major cities, and the usual medium for Buddhist sacred texts is narrow palm leaf manuscripts which are usually not illustrated. Older Northeast Thai-Lao and Lao wat were almost entirely constructed of easily available wood which is not amenable to murals. The oldest illustrated materials now found in Northeast Thai and Lao wat are colored lithographs produced by the S. Thammapakdi company, dating to the early 1900’s, and sets of these prints depicting the lives of the Buddha and of Prince Vessantara are often found mounted on the walls of wooden preaching halls. But the tradition of long portable painted scrolls is arguably earlier, and may have been brought to the Lao through long-standing connections with India.

Illustration of a monk giving a sermon in a Thai manuscript containing extracts from the Tipitaka, the legend of Phra Malai and illustrations of the Last Ten Birth Tales. Thailand, 1894. British Library, Or. 16101, f. 89 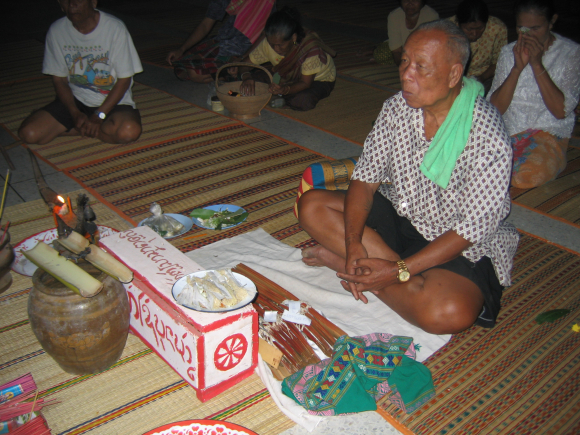 Bundled palm leaf manuscripts kept in a wooden box are distributed to monks to recite their section. Roi-et, Thailand, 2005. Photograph by Leedom Lefferts.

The ingenuity of the Lao is that they have taken these scrolls, best seen “in motion”, and incorporated them into a two-day merit-making festival, the Bun Phra Wet (the Merit-making Festival for Prince Vessantara, Phra Wet). The first day, muu hom (Lao; Thai, wan ruam), the day of coming together, includes visits by friends and relatives from more distant villages to the celebrating community. More importantly, it culminates in welcoming the return to the community of Prince Vessantara and his family, the Prince embodied in the scroll which the people in procession carry aloft. In this way, the people re-enact the beginning of the story’s climax, when they recognize their belief in the justice of Prince Vessantara’s actions and invite him to return home. 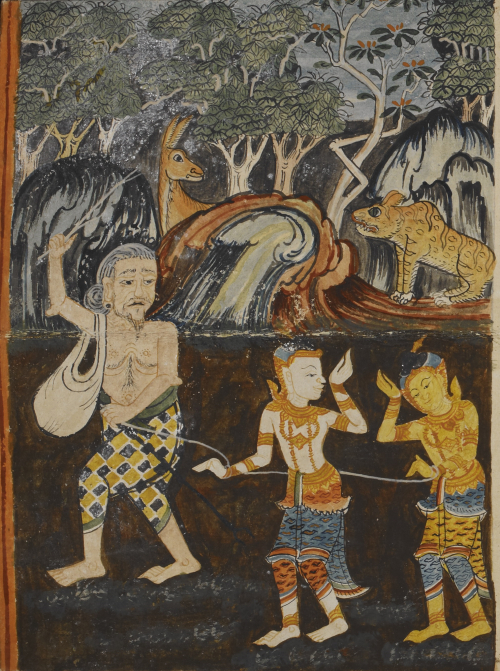 Scene of Chuchok leading Vessantara’s children away through the forest. Illustration in a folding book containing the Mahabuddhaguna, Thailand, 1841. British Library, Or. 15925, f. 43 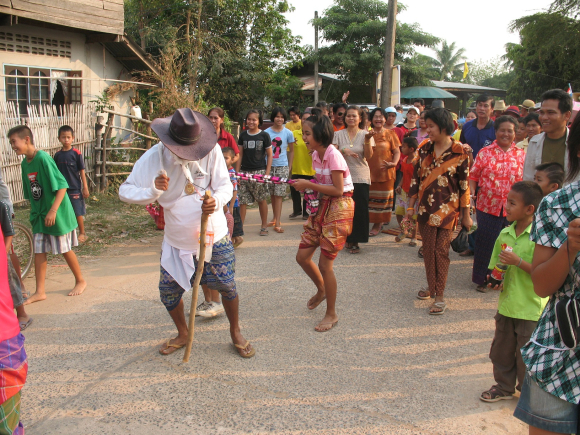 Chuchok leading the children of Vessantara away, performed by lay people during a procession in Khon Kaen, Thailand, 2008. Photograph by Leedom Lefferts.

In the cooler late afternoon of muu hom the rolled-up long scroll is taken from its storage place in the wat to a nearby water source outside the village, monks are invited to attend, and villagers gather, sitting on the ground on mats. The water source replicates the surroundings of Vessantara and his family’s hermitage in their place of exile, on Mazeway Mountain. The villagers then begin the story’s celebratory end. The Prince’s children have returned to the palace, ransomed by their grandparents; Vessantara sits in meditation, accompanied by his wife, Matsi. An elderly man initiates the invocation to the Buddha, Dhamma, and Sangha and the receipt of the five precepts, and then recites a special request, asking Phra Wet to return home. The elder’s recitation apologizes on behalf of the citizens who asked Vessantara’s father, the King, to exile his son. Sometimes a monk acting as Phra Wet, rejects the invitation two times, finally accepting it, reluctantly; sometimes a layman accepts it. A dish holding candles, incense, and leaves and flowers, meant as a token of the city, is offered. Phra Wet is reluctant to accept because he has found success and peace at the hermitage in this wild place “hidden in the mountains”; he finally agrees because it has been foretold that it is his duty to become king.

Vessantara is asked to return home and the family is reunited. Illustrated in a Thai folding book containing extracts from the Tipitaka and the Mahabuddhaguna. Thailand, 19th century. Or. 16552, f. 78 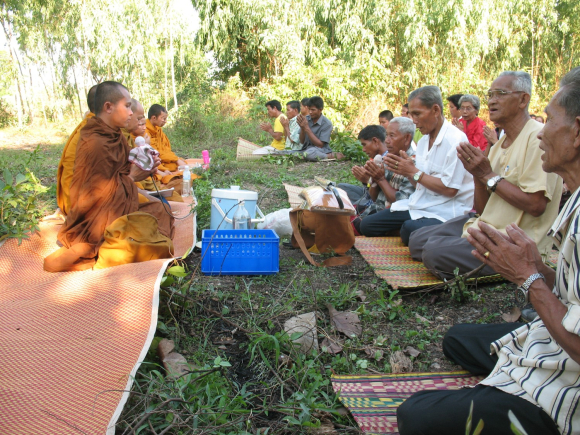 Lay people and monks re-enact the scene in which Vessantara is asked to return to the Kingdom. Photograph taken in Khon Kaen, Thailand, 2014, by Leedom Lefferts.

At this point, the village’s celebration echoes the story. In the Jataka tale, the celebratory procession wends its way city-ward for thirty days. The village procession mimics this, walking from the water source outside the village with the long scroll unfurled and held high on sticks or by its upper edge, as participants proceed with laughter and jollity. Villagers say Phra Wet is in the scroll; “Vessantara comes home”, as the day’s name signifies. As the procession enters the community, more and more people join it, holding the scroll while dancing, singing, and generally exclaiming, bringing branches and flowers from the forest to the wat. The festive congregation enters the temple grounds and circles the preaching hall three times, placing the branches and flowers in baskets under waving flags. They carry scroll into the preaching hall and fasten it to pillars so that it surrounds the preaching and audience area, converting it into a transformative space. 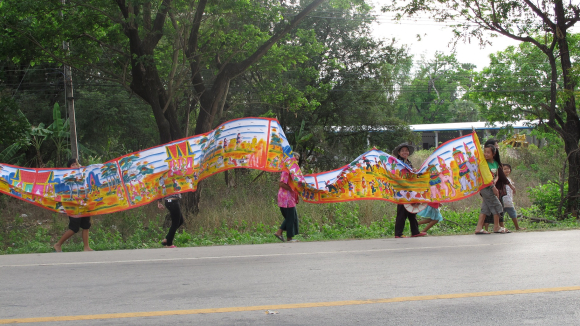 That evening, the Phra Malai legend is read to the audience, ensuring that they know the importance of listening to the complete Vessantara Jataka. Phra Malai, a monk who had accumulated much merit, travels to the various Buddhist hells and to Tavatimsa heaven to worship the Culamani Cetiya, in which is enshrined the hair of Siddhartha, the Buddha-to-be, which he had cut off when he entered his seven years of exile. There Phra Malai meets Indra, King of the Gods, and Maitreya, the incarnation who will follow the Buddha of the present era. Maitreya enjoins Phra Malai to return to the human world and inform its citizens that, in order to be reborn when Maitreya comes, they must listen to the complete recitation of the Vessantara Jataka. 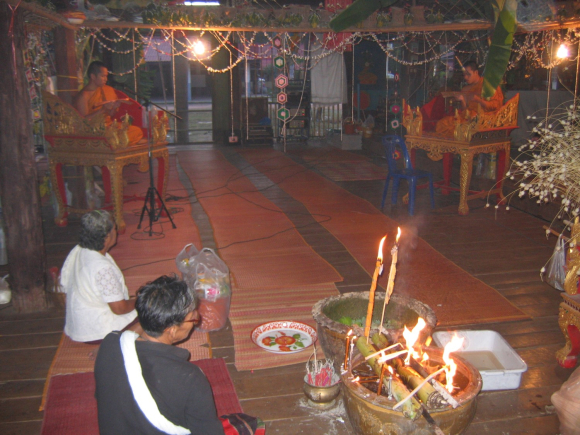 Audience listening to the Phra Malai story, burning candles and incense over water in the transformative space created by the scroll and other meaningful objects. The sacralized water will be taken home to infuse bath water for children and older adults. Photograph taken by Leedom Lefferts, Khon Kaen Province, Thailand, 2006.

The next day, muu thet, the day of the sermon, monks recite the complete story from palm leaf manuscripts. This takes place in the transformative space created by the hanging scroll. Indeed, since he is present in the scroll, people say that Prince Vessantara hears the recitation of the story of his own life.

After the day-long recitation, villagers clean the preaching hall, and the scroll is taken down and rolled and stored for the ceremony the following year. A scroll endures considerable wear and tear in the course of the procession and while hanging. Most new scrolls are produced in just two villages in Northeast Thailand, but the fluorescence of scroll production by local artists appears to have occurred in the period following World War II to the mid-1980’s. The Buddhist year 2500 (1957CE) seems to have resulted in a peak of production, as Buddhists realized that the 2,500 years to follow have been predicted to witness a decline in the following of the Dharma. The continuing popularity of annual Bun Phra Wet festivals in the thousands of Northeast Thai and Lowland Lao temples indicates the vibrancy of this religious practice among these people. 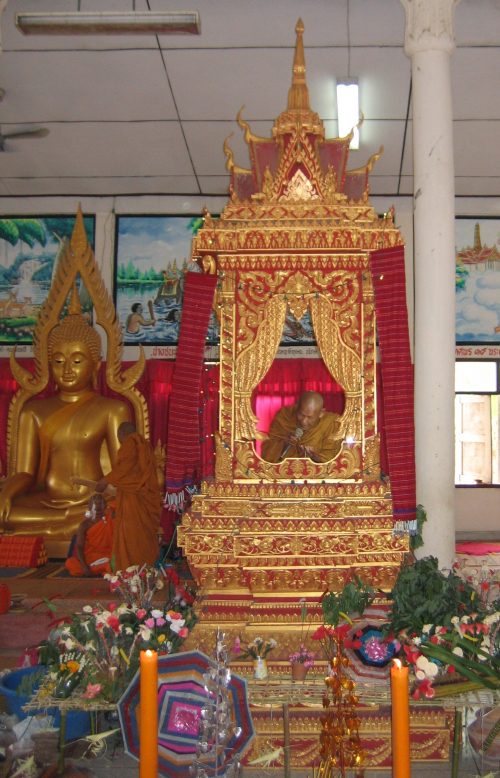 Leedom Lefferts is Professor Emeritus of Anthropology at Drew University, Madison, New Jersey, and Visiting Scholar at the Carolina Asia Center, The University of North Carolina. His studies have focused on Northeast Thai Lao and Southeast Asian material culture, including indigenous pottery production, the Vessantara epic and its scrolls, and issues of rural development and political inclusion.

Posted by Annabel Gallop at 4:09 PM