Women in Buddhism at the time of the Buddha

The Canon of Buddhist teachings in Pali, called the Tipitaka, records the practice of loving kindness taught by the Buddha, directed at all human beings. This blog post recalls episodes from the Life of the Buddha highlighting the role of women in Buddhism at the time of the historical Buddha Gotama, with illustrations from Burmese manuscripts.

King Pasenadi Kosala, a close devotee of the Buddha, was displeased when he was informed that his queen had given birth to a daughter. The Buddha taught the king that Buddhism does not consider the birth of a daughter a cause for worry and despair, for Buddhism considers men and women to be equally useful to society. The Buddha elevated the status of women by pointing out that a woman is the mother of man, and no person is worthy of greater reverence and veneration than one’s mother.

After renouncing the world, for six years Siddhattha Gotama tried to find release from the weariness of existence but he could not reach his goal. While Prince Siddhattha was sitting under a Banyan tree, Sujata, a rich man’s daughter, offered him a golden cup containing milky rice. This gift provided the ascetic Buddha-to-be Siddhattha with enough strength to practise meditation and to achieve enlightenment. Later Sujata became a bhikkhuni (an ordained female monastic). 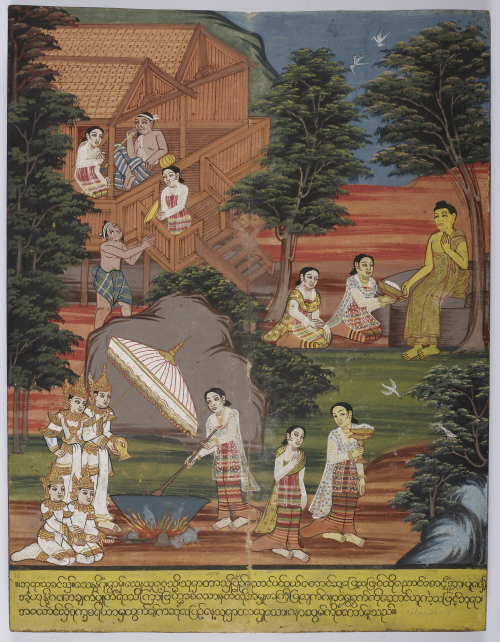 The Bodhisatta receiving the milky rice pudding from Sujata. He accepted his first food after realizing that extreme asceticism was not suitable for achieving enlightenment. British Library, Or. 14297, f. 16

Vasundhara is an earth goddess and her name literally translates to ‘flow of wealth’. Boddhisatta Siddhattha’s moment of enlightenment came when he touched the earth to bear witness to the virtues and great offerings he had made, while Mara (the demon of illusion) assaulted him with his armies. The earth goddess was summoned to help the Boddhisatta by wringing water from her hair to wash away Mara’s armies. The Buddha’s victory is presented with a gesture of his hand downward toward the earth. This gesture, called the Bhumisparsha mudra, or "the earth witness" mudra, commemorates the Buddha's victory over temptation by the demon Mara, and his attainment of enlightenment. 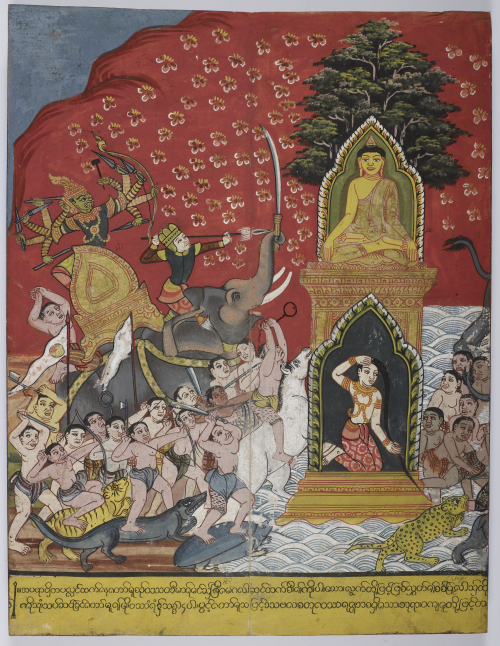 Siddhattha, seated in a cross-legged posture, decided not to arise until he became a Buddha, and he meditated. Mara, the Evil One, then arrived, riding on a ferocious elephant and appearing to have a thousand arms, each bearing a weapon. In response the prince called the earth to witness. When the kneeling figure of the earth goddess replied, Mara and his army found all their efforts to no avail, and therefore fled. British Library, Or. 14297, f. 20

Queen Maya was married to the Buddha’s father, King Suddhodana, the king of Kapilavatthu. After ten lunar months, she returned to her parents for the impending birth. On the way, she gave birth to the prince Siddhattha at the Lumbini garden on Friday, on the full-moon day of May. She died seven days after the birth of the Buddha. During the seventh rainy season the Buddha went to Tavatimsa heaven and preached the Abhidhamma (higher teaching) for three months to his mother, who had been reborn as a deva, as a mark of gratitude for his former mother. After hearing the Dhamma from the Buddha, she became a Sotapanna (Stream-winner) and entered the first stage on the path to enlightenment. 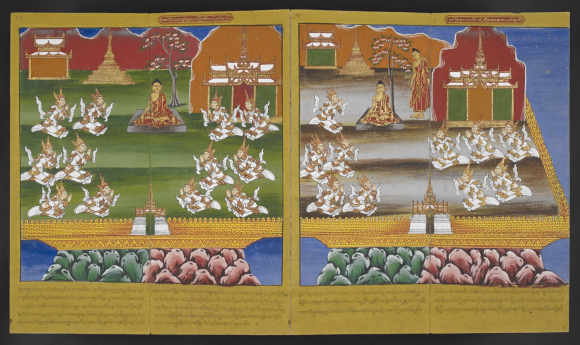 The Buddha teaching the Abhidhamma in Tavatimsa heaven to assembled gods. British Library, Or. 14405, f. 77

After the death of the Buddha’s father, King Suddhodana, the widowed queen Gotami, the Buddha’s foster mother, approached the Buddha with a request to join the Sangha or monkhood.  However, at the beginning the Buddha did not permit the admission of women into the Order. Although the Buddha initially declined, after the intercession of Ananda, he later granted his foster mother’s wish. The ordination of Gotami and the establishment of the Order of Buddhist Nuns or bhikkhunis is the one of the great stories in Buddhist literature. Gotami was the first ordained bhikkhuni and the foremost female disciple of the Buddha. It was the first time in the history of the religion that the Order of Nuns was established and women were admitted to the monastic life.

Yasodhara was the mother of Rahula and the wife of the Bodhisatta Siddhattha Gotama. When she heard about her husband’s ascetic life she took to wearing yellow robes, taking one meal a day, and rejecting comfortable beds. After the ordination of Pajapati Gotami, Yasodhara was ordained as well, and many other women also followed in her footsteps to become bhikkhunis.

The Dhammapada commentary includes a story of a bhikkhuni called Janapadakalyani Rupananada who was engaged to be married to Nanda, the brother of the Buddha. After Nanda became a bhikkhu she went to the Buddha to hear him preach and she also became an arahant (a perfected person). 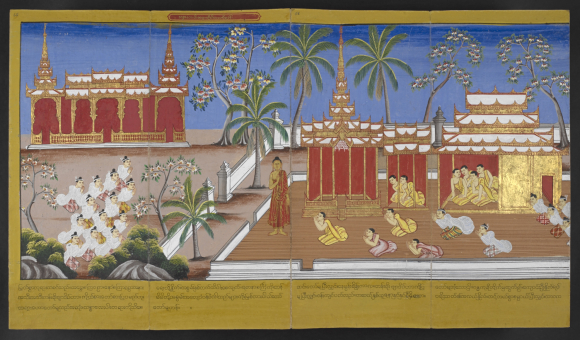 The followers of the Buddha including Bhikkhuni Patisambhidapattacira, and Bhikkhuni Uppalavanna pay respects to the Buddha. British Library, Or. 14405, f. 65

There were many more bhikkhunis during the Buddha’s time. Uppalavanna was the daughter of a wealthy merchant from Savatthi. She became a bhikkhuni and was the foremost model amongst bhikkhunis.

Patisambhidapattacira was the daughter of another wealthy man who went mad with grief when she lost her family. After hearing the Buddha’s teaching she became a bhikkhuni and she was an eminent female arahant declared by the Buddha.

Visakha was one of the chief female lay followers of the Buddha. Her father was the king’s treasurer and her husband was a wealthy man. When she was seven years old she attained the first stage of sanctity after hearing the Buddha’s teachings. She donated the Pubbarama monastery to the Buddha and his disciples. She offered daily alms to the monks and nuns, and also played an important role in the affairs of the Order of Nuns.

Kisagotami from Savatthi experienced the profound pain of grief when her little son died. After the Buddha had taught to her about impermanence, as death comes to all beings, she requested the Buddha to admit her to the order of Bhikkhunis.

When the Buddha arrived at Vesali, the courtesan Ambapalika approached the Buddha and invited him to a meal. The Buddha accepted the invitation of the courtesan. The next day, after the Buddha received another meal from her, Ambapalika also donated her mango grove. After hearing the Buddha’s teachings she entered the order of nuns and became an arahant (a perfected person). 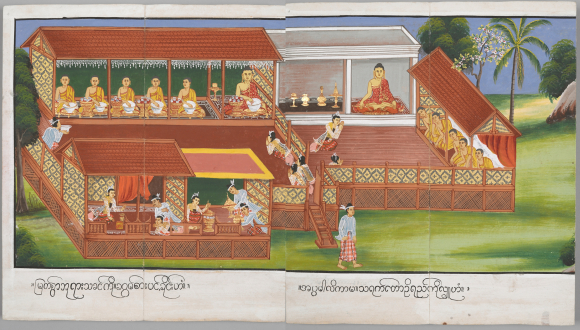 Ambapalika offering a meal to the Buddha and his disciples, and donating a mango grove. British Library, Or. 13534, f. 18-19

Just like Buddhist monks, Buddhist nuns also left their family life to practise the Buddha’s teachings. After the passing away of the Buddha, all his Bhikkhus and Bhikkhunis, male and female disciples, continued teaching the Dhamma to the people to maintain the Buddha’s teachings. The Apadana provides all these rich biographical details with great poetic flourish. The Therigatha (Verses of Elder Nuns), a section of the Khuddaka Nikaya, contains numerious stanzas that clearly express the feelings of joy experienced by saintly bhikkhunis at their ability to enter the Order and realize the Truth. The Anguttara Nikaya gives a very comprehensive record of Buddhist women, bhikkhunis and upasikas (nuns and laywomen), who did great work not only as followers of the Dhamma but as preachers of the Buddha’s teachings. Each woman, like each man, had in her the potentiality of becoming an arahant.

This is the final blog post by San San May, assistant Curator of the Buddhism exhibition, who joined the British Library as Curator for Burmese in 2000, and retired in October 2019. 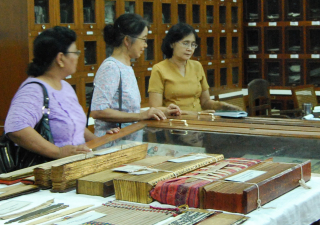 San San May (in the centre) viewing manuscripts in the Universities Central Library in Yangon, during an official visit to Myanmar in May 2011 on behalf of the British Library. 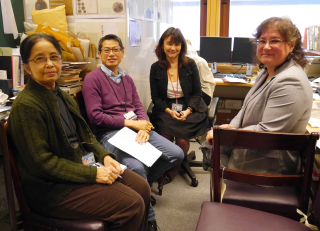 Posted by Annabel Gallop at 1:38 AM