This is the twelfth of a series of blog posts celebrating the British Library exhibition on Buddhism, 25 Oct 2019 – 23 Feb 2020.

With over five hundred million practising Buddhists, Buddhism is the fourth largest faith in the world. Consequently, numerous countries produce stamps with Buddhist themes and imagery. Stamps may now largely be viewed as a superseded technology, and are certainly less commonly encountered than in the past, but they remain an intrinsic part of our global visual and material culture. This raises the question of whether such stamps depicting Buddhist themes have any inherent didactic religious purpose, or whether they are merely pieces of visual ephemera? The following selection of late 20th century Sri Lankan stamps issued for Vesak, celebrating the Buddha’s birth, enlightenment and death, may provide some tentative answers.

Since Buddhists start their path to enlightenment seeking refuge in the Tiratana or three jewels, this subject will form the focus of the present discussion. The Tiratana comprise the life of the Gotama Buddha, his teachings known in Pali as Dhamma (Sanskrit: Dharma) and the community of his disciples known as the Sangha. A range of stamps narrating the Buddha have been issued focusing on his birth and life as Prince Siddhattha Gotama, his unhappiness and eventual rejection of this royal lifestyle in favour of an ascetic existence, as well as his obtaining enlightenment to become the Buddha. 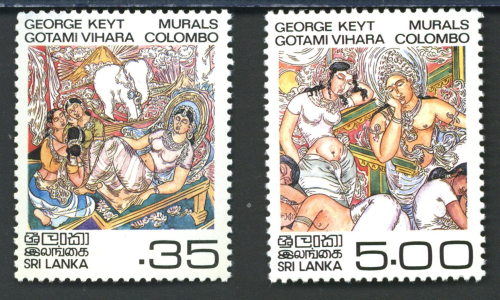 The two stamps shown above come from a set of four released for sale on 13 May 1983, designed by George Keyt and A. Dharmasiri, illustrating scenes from the life of Prince Siddhattha, based on temple murals in the Gotami Vihara, Colombo. The 0.35 c stamp (Figure 1) shows Prince Siddhattha’s mother, Queen Mahamaya, dreaming that a white elephant entered her side, foretelling the birth of the prince destined to become a great earthly or spiritual ruler. The 5.00 r stamp (Figure 2) depicts Prince Siddhattha and the sleeping dancers recounting how he renounced the throne on his twenty-ninth birthday intending to leave the palace and embark on a spiritual life. That day the Prince’s wife, Yasodhara gave birth to his only son Rahula, and King Suddhodana hoped to distract his son from leaving by holding a celebratory banquet inviting the best dancers and musicians to perform. During the festivities Prince Siddhattha slept, and upon waking up left the palace whilst everybody was asleep, taking the first step of his journey towards enlightenment.

Numerous stamps also depict scenes from the Buddha’s previous lives based upon a body of literature known as Jataka tales. The next two examples come from a set of four stamps issued for sale on 23 April 1982 depicting scenes from the Vessantara Jataka, about a compassionate prince named Vessantara who gave away everything he owned including his own children, thereby displaying the virtue of perfect generosity. Designed by A. Dharmasiri, the stamps depict images from a cloth painting at the Arattana Rajamaha Vihara in the Hanguranketa District of Nuwara Eliya.

The 0.35 c stamp (Figure 3) illustrates Prince Vessantara giving away a magical rain-making white elephant to envoys from Kalinga, which was then facing a serious drought. The citizens - fearing the handover of the elephant would cause a drought in their own kingdom - were dismayed at Vessantara’s act of generosity and convinced King Sanjaya to banish his son. The 2.50 stamp (Figure 4) recalls the pivotal moment of the story when Prince Vessantara hands his two children over to the old Brahmin beggar Jujaka to be enslaved.

On his death, the Buddha’s cremated remains were enshrined and worshipped in Stupas in various localities. The third Emperor of India’s Mauryan Dynasty, Ashoka, exhumed the relics and redistributed them, in addition to sending out saplings from the original Bodhi tree that the Buddha meditated under and obtained enlightenment. These relics form a continuation of the Gotama Buddha story and are a theme represented on stamps. The two examples shown below come from a set of three postage stamps issued on 3 May 1979. A. Dharmasiri’s designs based upon the painting in the Kelaniya Temple recount how Sri Lanka acquired two of its most important Buddhist relics.
The 0.25c stamp (Figure 5) highlights how the Buddha’s Sacred Tooth was conveyed out of Kalinga to Sri Lanka by Prince Danta and Princess Hema Mala upon King Guhasiva’ orders. The 1.00 r stamp (Figure 6) narrates how the Emperor Ashoka’s eldest daughter and missionary, Sanghamitta, transported the right south branch of the Bodhi-tree, under which the Buddha had meditated, to the island. 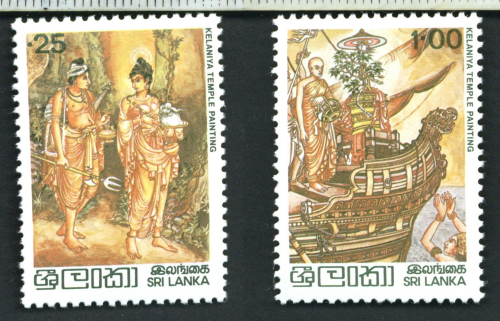 The Buddha’s teachings or Dhamma are also illustrated on stamps. Designed by S. Silva and released for sale on 30 April 1993, the following four examples and mini-sheet are based upon specific verses from the Dhammapada (Sayings of the Buddha), one of the most widely read and best known of the Buddhist scriptures. The 0.75 c stamp (Figure 7) is based on a verse recounting the story of the Brahmin Magandiya, who unsuccessfully tried to offer his beautiful daughter as a wife for the Buddha. The 1.00 stamp (Figure 8) is based on a verse recounting the story of Kisa Gotami, a mother almost driven mad by the loss of her child. Advised that the Buddha could help bring the child back, she sought him out. The Buddha promised he would do so provided she obtained some white mustard seeds from a family where no one had died. Unsuccessful in her search Kisa Gotami soon realised that no home is ever free from death, and returned to the Buddha who comforted and preached to her, whereupon she became a devoted disciple. 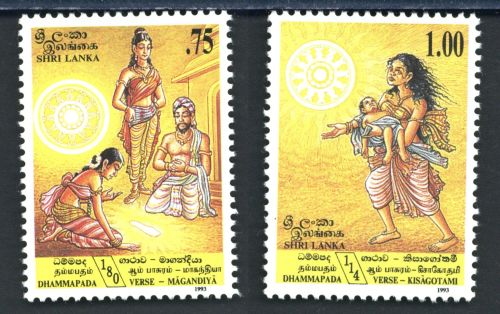 The design of the 3.00 r stamp (Figure 9) comes from a verse about Patacara, the beautiful daughter of a wealthy merchant, who fell pregnant and eloped with one of her father’s servants named Amarsh to live on a farm. Against her husband’s wishes, she tried to return to her parents to give birth to her first son, who was born on the way, enabling the couple to return home. Some time later she fell pregnant once more and again left to return to her family. Amarsh followed her and en route Patacara went into labour at the onset of a storm. Her husband was bitten by a snake and killed instantly whilst trying to build some shelter. Carrying on, she reached a swollen river compelling her to cross the river with one child at a time. Leaving her oldest child on the riverbank she carried her baby across the river. On her return to retrieve her oldest child, a vulture carried the baby off. When she screamed for the baby, the oldest child entered the water thinking she was calling for him, and drowned. Encountering the Buddha and telling him about the tragic loss of her family, he taught her about impermanence, whereupon she became a disciple.

The 10.00 stamp (Figure 10) is based upon the verse about the murderous brigand Angulimala, who killed nine hundred and ninety nine people, taking their fingers as trophies which he wore round his body. The Buddha’s intervention and teachings not only prevented Angulimala from making his own mother a victim, but enabled Angulimala to convert to Buddhism and cancel his bad Kamma with meditation. 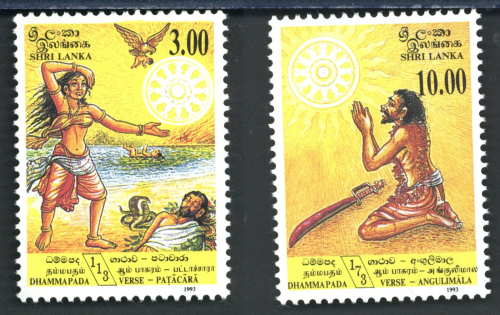 Other stamp issues offer clear advice on how to set out on the path of enlightenment. On 29 April 1995, Sri Lanka released a set of four stamps and a mini-sheet detailing a selection of the Paramita, ten noble characteristics or qualities associated with enlightened beings. Designed by S. Silva, the 1 r stamp reveals a scene representing Viriya Paramitava, loosely defined as an attitude whereby an individual gladly engages in wholesome activities to accomplish wholesome or virtuous actions. The design of the 2 r stamp depicts a Boddhisatva catching a person falling from the sky representing Khanti Paramitava or the practice of patience, forbearance and forgiveness. The 10 r stamp reveals a figure teaching two students representing Sacca Paramitava or truth in reference to the Buddha’s four noble truths. The 16 r stamp depicts a scene with a Boddhisatva representing Adhitthana Paramitava or resolution, self-determination and will (Figure 11). 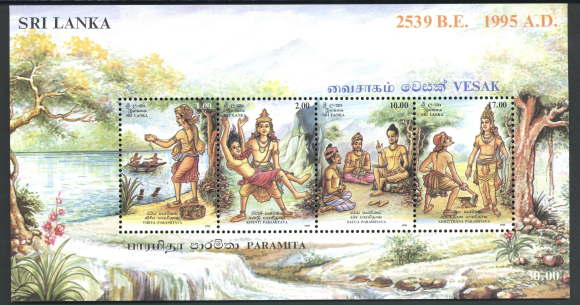 Turning to stamps about the Sangha or community of disciplines, the 22 May 1991 National Hero Issue designed by S. Silva includes a 1 r stamp commemorating the notable Buddhist Missionary, Narada Thero (Figure 12). 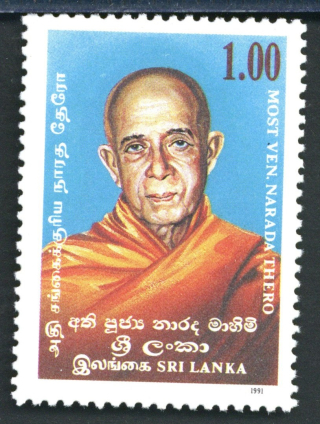 Another stamp issued on 1 January 1988 designed by W. Rohama marks the 30th Anniversary of the Buddhist Publication Society in Kandy (Figure 13). The 18 June 1989 0.75 c stamp by the same designer notes the establishment of the Ministry of Buddha Sasana, a Sri Lankan state department overseeing the governance of Buddhism nationwide. Modern Buddhist Studies are also commemorated on stamps, including this one issued on 14 July 1981 designed by P. Jaratillake celebrating the centenary of the Pali Text Society (Figure 14).

The material discussed here represents merely a fraction of stamps depicting Buddhist subject matter and is far from unique, whether from Sri Lanka or across the wider Buddhist world. In Buddhist societies, it is believed that the reproduction and dissemination of manuscript or printed Buddhist texts can accrue good Kamma (Sanskrit: karma) for their creators and sponsors, if done conscientiously with the right motives. Would it be appropriate to interpret such carefully designed stamps on Buddhist themes as an extension of this existing Buddhist manuscript and print tradition? Could the same Kamma-generating qualities accrue to individuals involved producing and disseminating such stamps?

Finally, it is interesting to consider that stamps used to pre-pay mail are defaced when dispatched to the recipient, disposed of on a letter’s receipt, and finally destroyed in the rubbish or recycling plant. Such use renders them impermanent, temporary pieces of visual mnemonics similar to the tradition of Buddhist Mandalas.

Perhaps there is a theological aspect to philately after all?

Image sources
The stamps reproduced in this blog post come from Sri Lankan material within the Crown Agent’s Philatelic and Security Printing Archive housed in the British Library’s Philatelic Collections.