Exquisite patterns: Japanese Textile Design Books, a new exhibition of images from the British Library’s Japanese collection, runs from 14 February to 17 May 2020 in the Library’s Second Floor Gallery. In the first of a series of blog posts, curator Hamish Todd introduces the exhibition and some of the highlights. 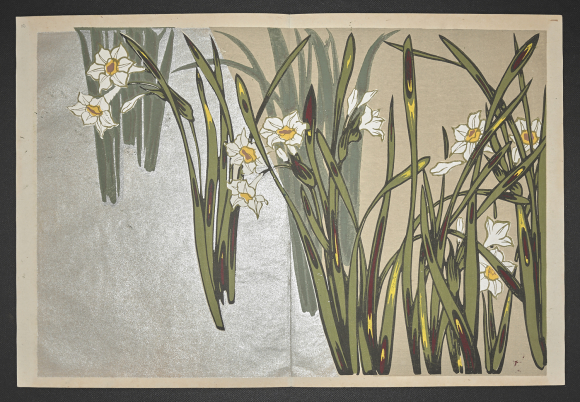 With the help of a grant from the Great Britain Sasakawa Foundation, the British Library is digitising its collection of Japanese pattern books and making these available online. This exhibition of selected images has been created to display the variety and vibrancy of these works, from their origins in the mid-17th century until the early 20th century.

Textiles and in particular the kimono in its various forms, have been a focus for artistic creativity in Japan for centuries. Following decades of civil war, the Edo Period (1603-1868) saw the re-establishment of peace and stable government under the Tokugawa shogunate. As the economy prospered, large urban populations developed in Kyoto, Edo (Tokyo) and Osaka. Alongside the Imperial Court and aristocracy in Kyoto, the samurai and increasingly prosperous merchant classes of Edo formed a sophisticated, fashion-conscious audience and many aspects of Japanese culture, notably the arts and crafts, flourished.

The desire among the fashionable for variety and novelty led to the publication of the first pattern books, hinagata-bon 雛形本, in the 1660s. These early works were printed using traditional woodblock technology in black and white, but often included notes describing the intended colour and type of fabric. They were practical in nature, serving as manuals for textile designers and kimono merchants, or fashion magazines and catalogues for the discerning customer. 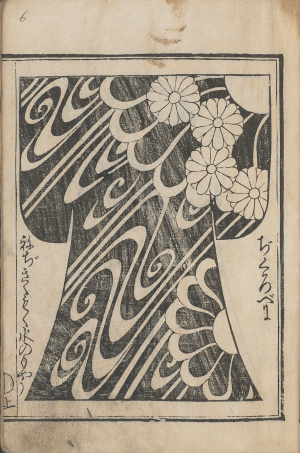 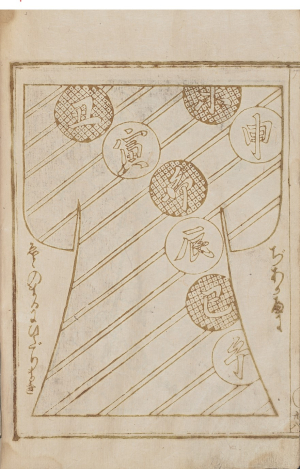 The first kimono pattern book. Shinsen o-hiinagata 新撰御ひいながた by Asai Ryōi 浅井了意. British Library, Or.74.cc.8. On the left a pattern of chrysanthemums and on the right, printed in red, the characters representing the names of the animals of the Chinese zodiac.

Shinsen o-hiinagata 新撰御ひいながた’A New Selection of Patterns’, the first pattern book, was published in 1666. Initially printed solely in black and white, the following year another edition, shown here, appeared with some pages also printed in single colours of blue, green or red. Early pattern books normally depict the kosode (forerunner of the modern kimono) in a T-shape with the back and sleeves forming the focus of the striking designs.

This novel type of publication proved very popular and new titles appeared in quick succession as publishers sought to capitalise on the new trends. Textile designers and artists drew inspiration from a wide range of sources, notably, the natural world, folklore, history, signs of the zodiac, auspicious symbols and the written word.

For example, in this design, a carp fights its way up a powerful waterfall, a popular symbol of energy and determination drawn from a Chinese legend in which a carp crossed the Dragon Gate rapids on the Yellow River and turned into a dragon. 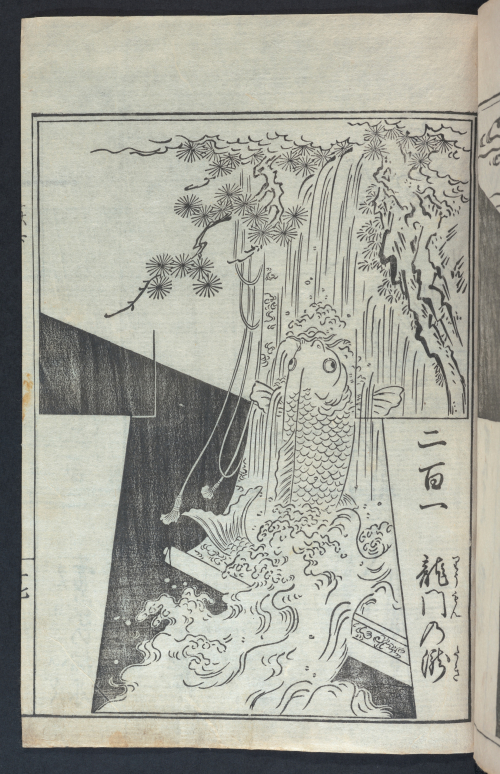 In this design from Shin moyō yaegasumi 新模様八重霞, the artist Kōyōken Charanshi 紅葉軒茶藍子 has depicted a herd of lively horses. Published in 1784, this work brings an added level of sophistication to the pattern book by the addition of delicate hand-colouring and the inclusion of images of the whole design and of a detail. 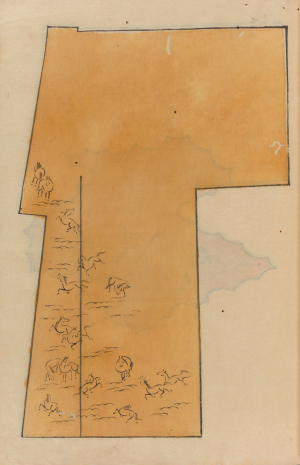 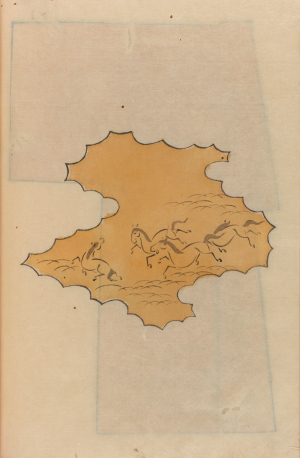 Symbols of good fortune and longevity were, and remain, popular motifs for textiles. In Japanese folklore, the crane represents 1,000 years of life, the tortoise 10,000 years. In Tennen hyakkaku 天年百寉 (‘Tennen’s One Hundred Cranes’) Kaigai Tennen, explored the theme with depictions of these auspicious birds in a variety of styles, settings and combinations with other propitious symbols. 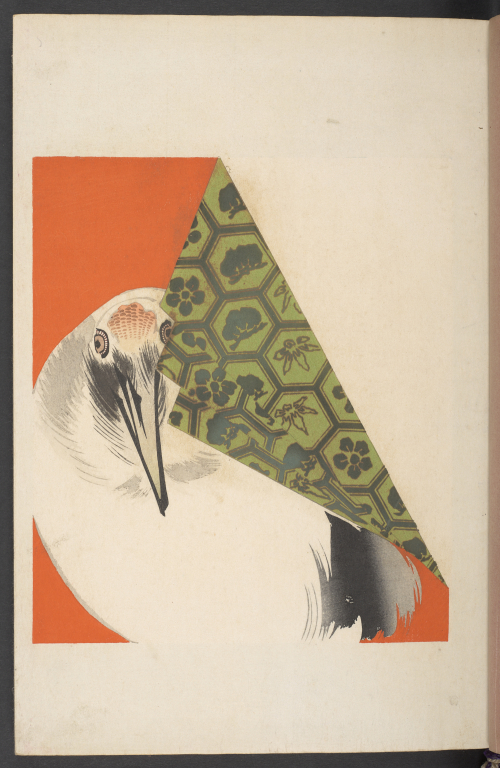 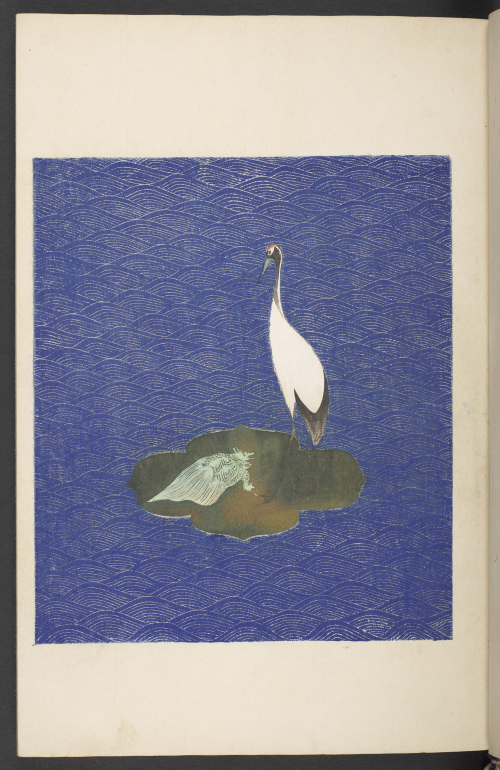 Enterprising kimono merchants were quick to see the potential of pattern books as a means of attracting customers and promoting their wares to a wider clientele. An example is the lavish Kuretake 呉竹, produced in 1902 by Ichida Yaichirō 市田弥一郎, proprietor of the Kyoto kimono emporium Ichida Shoten. It includes 120 spectacular designs as well as 47 textile samples from which clients could choose their preferred colours and fabrics. 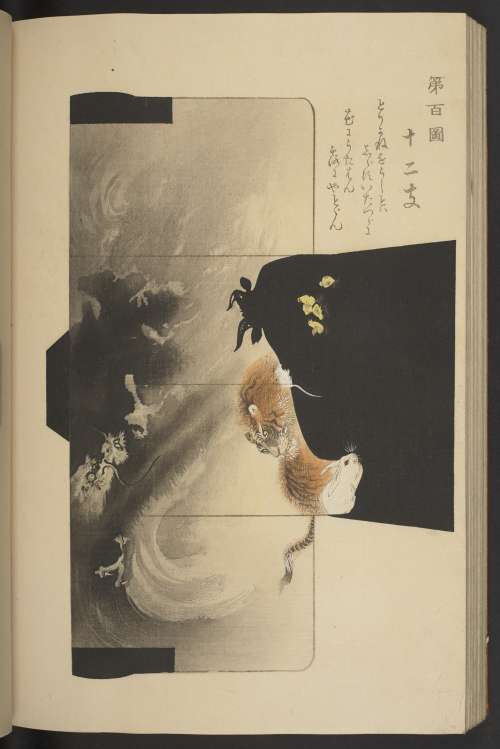 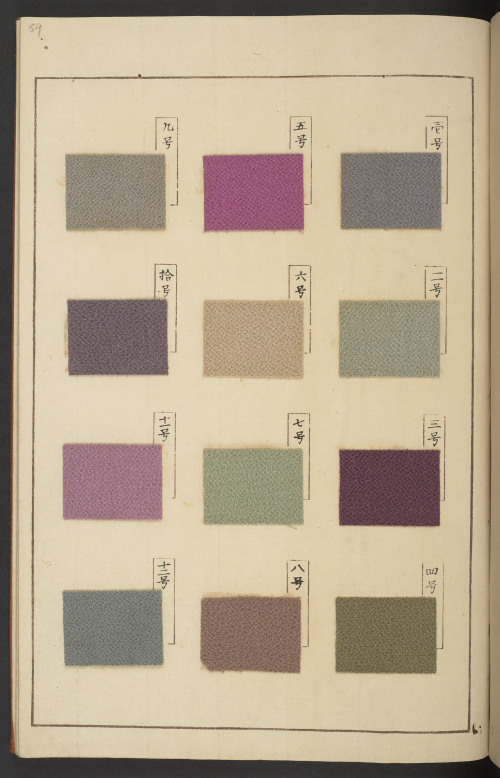 The British Library collection also contains a slightly more ‘homespun’ version of this sort of ‘catalogue’. It is in the form of a scrapbook into which paper cutouts of kimono designs have been pasted. Some of these are reminiscent of the clothes made for Japanese paper dolls (anesama ningyō 姉様人形 ‘big sister dolls’). 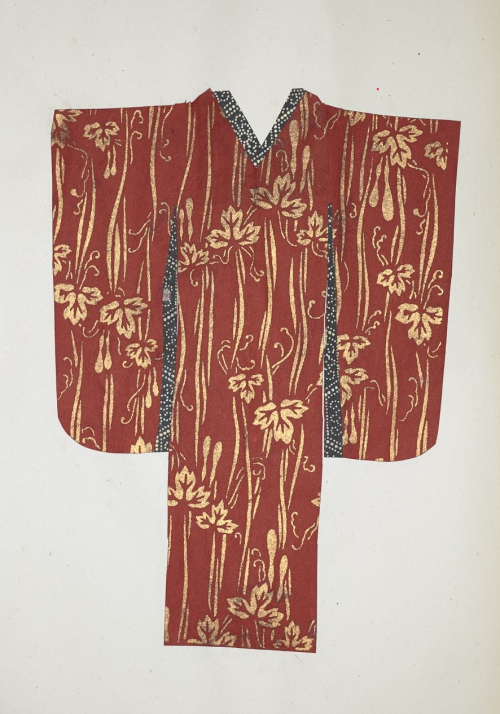 As colour-printing became more sophisticated, so did pattern books. By the late 19th century publishers, led by Kyoto-based Unsōdō and Unkindō, were collaborating with talented artists, among them Kamisaka Sekka, Furuya Kōrin and Tsuda Seifū, to produce superb design albums or zuan-chō 図案帳. While some of these were meant as source books for artisans, others were conceived as beautiful objects to be enjoyed for their own sake. We will look at these later works in the following blog.

Posted by Annabel Gallop at 2:30 AM