Guanyin: the Bodhisattva of Great Compassion

This is the thirteenth of a series of blog posts celebrating the British Library exhibition on Buddhism, 25 Oct 2019 - 23 Feb 2020.

Bodhisattvas are sentient beings that seek enlightenment and embrace the principle of compassion to liberate others from suffering. In Buddhist practice, suffering is part of the cycle of rebirth and the level you are reborn is in a cause and effect relationship with your actions in previous lives. There are many levels that sentient beings need to attain before they achieve enlightenment and become a Buddha: the Bodhisattva level is the last step before Buddhahood. This blog post will introduce one of the most famous Boddhisattvas in Mahayana Buddhism: Avalokiteśvara Bodhisattva, also known as Guanyin. It is important to highlight that Guanyin had actually become a Buddha known as 正法明如來 (“The Buddha who clearly understands the true law”) in the past. However, in order to make direct contact with sentient beings and lead them from suffering, this Buddha decided to step down and return as a Boddhisattva. This decision is known as 倒駕慈航 (Turning back the Ferry of Compassion). This blog will discuss the great compassion of this Bodhisattva from three perspectives: the name, the form, and the practice, all of which are centred around the needs of sentient beings.

The name: caring for all sentient beings

As Buddhism spread eastwards from its Indian heartland, Buddhist terminology in Sanskrit was adapted to other languages using either a sense-for-sense translation or a transliteration derived from the original pronunciation. For example, the name of Amitābha Buddha underwent transliteration to become ‘Amituo’ in Chinese. By contrast, Avalokiteśvara’s name was translated into Chinese based on its meaning and certain aspects of the Bodhisattva’s nature. This approach leaves more room for interpretation and, as a result, there are two common versions of the name, Guanshiyin and Guanzizai.

Guanshiyin, also known as Guanyin, is the name for this Boddhisattva that is seen in most sutras, such as the Etiquette of Great Compassion Repentance. This translation comes from the Sanskrit “Avalokita”, which means to observe (觀[guan]), and “svara”, which means sound (音[yin]). In other words, the Bodhisattva is “the sound-perceiver” or the one who hears the sounds (of sentient beings) of the world (世[shi]). This name is also referred to the Universal Gate Chapter of Lotus Sutra, which says: “Avalokiteśvara Bodhisattva will instantly perceive the sound of their cries, and they (the suffering) will all be liberated”. One possible explanation for this name sometimes being abbreviated is that, in order to avoid the name of Emperor Taizong (598-649) of Tang: 李世民 (Li, Shimin), people took out the second character and shortened the name from Guanshiyin to Guanyin. Either way, this reflects the fact that Guanyin is conscious of the voices of the suffering calling for help and is committed to rescuing these beings in various ways. 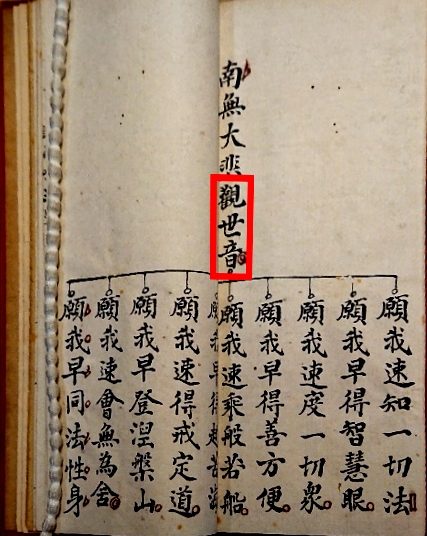 The second name for this Boddhisattva, Guanzizai, is an interpretation based on the characteristics of the Bodhisattva and the path that practitioners need to follow. It comes from a different, but more common Sanskrit root “Avalokita” + “iśvara” from which it is possible to derive the meaning of ‘one who can observe unimpeded’. This name appears in the Heart Sutra which is the condensed, but nonetheless sacred, text of the Sutra of Great Wisdom. It reveals the concept of emptiness and the fundamental truth that nothing is permanent. This Bodhisattva is the one who perfectly understands (or perceives: 觀[guan]) this rule of emptiness, leaves aside their worldly attachments, and attains the great freedom (自在[zizai]) that comes with this realisation. In this way, this Bodhisattva can hold all sentient beings in his heart and rescue them without any obstacles. Therefore, when the Heart Sutra was translated by Master Xuanzang (c.602-664) in the Tang Dynasty, Guanzizai was used in order to reveal this Boddhisattva’s nature and hopefully to encourage practitioners to follow the same path. 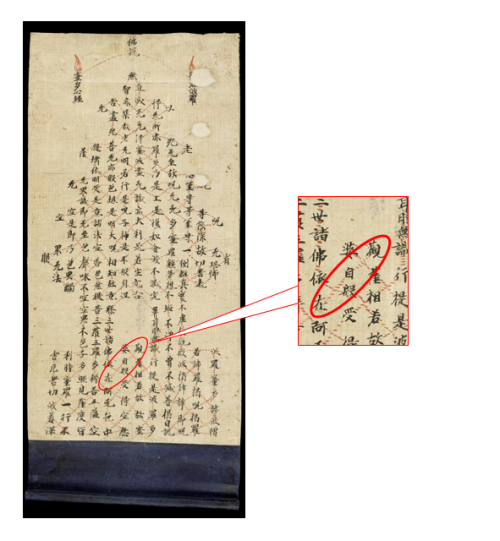 The name of the Bodhisattva: Guanzizai (觀自在) shows in the lower middle part of the stupa of Heart Sutra (Heart Sutra, Or.8210/S.4289).

The form: depictions of Guanyin

While there are a few different names to refer to this Bodhisattva, there are even more different forms that Guanyin can take when appearing to sentient beings in order to guide them away from suffering.

One interesting development of Guanyin’s form is the way in which gender is represented. In general, the gender of deities in Buddhism are neutral and rarely discussed. Early depictions show Guanyin with a more masculine appearance, creating the impression that the original gender of Guanyin was male. However, the female form becomes more popular later in Mahayana Buddhism, particularly in China. The reasons for this are linked to the historical context. Traditionally, China was a very patriarchal society; a system reinforced by Confucian principles which put pressure on women to obey their husbands and give birth to sons (instead of daughters). As a result, women were generally the ones asking for Guanyin’s help in order to achieve these goals. In addition, it was thought that a woman must commit to one man for her whole life (even after his death), therefore it seemed more appropriate for a woman to worship a deity in female form. In this way, Guanyin starts to take on more feminine qualities such as kindness and grace and, in female form, she is seen as more accessible to women. So far we have discussed the work of Guanyin in isolation, but this Bodhisattva does not go it alone in the rescue business; Guanyin also works with Amitābha Buddha and Mahāsthāmaprāpta Bodhisattva to guide the dead to the Western Pure Land. This trio is known as the Three Noble Ones of the West. When pictured together, it would be easy to recognise the Amitābha Buddha as he is always in the middle but sometimes it can be a bit difficult to work out which attendant is Guanyin since the basic style of Bodhisattvas is the same. One clue would be the plant they hold in their hand; Mahāsthāmaprāpta holds a lotus and Guanyin holds a willow. The other indication is the item on their head; it is a vase containing his parents’ ashes on Mahāsthāmaprāpta’s head and a statue of seated Amitābha Buddha on Guanyin’s. In this case, when a person approaches death, they can call upon not only Amitābha, but also Guanyin to ask for guidance. 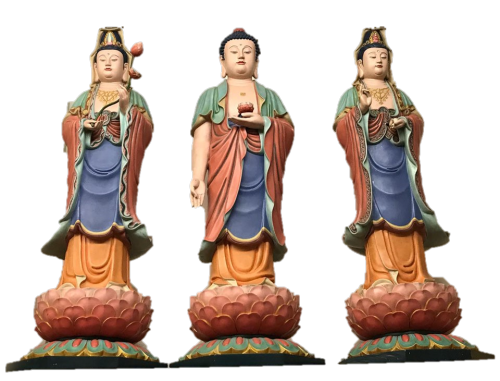 The Three Noble Ones of the West (Photo credit: London Fo Guang Shan; posted with permission).

The practice: Guanyin as a guide

There are many different forms of Buddhist practice including meditation and chanting of texts such as dharanis or sutras. Certain dharanis and sutras can relate to a particular Buddha or Bodhisattva. The most notable ones featuring Guanyin are the Great Compassion Dharnai and the Universal Gate Chapter on Avalokiteśvara Bodhisattva.

Generally speaking, a dharani is a phrase or mantra, recited as sounds based on the original Sanskrit, which is believed to be powerful and protective. When someone chants the dharani, the related deity will come to provide their support. The Great Compassion Dharani, also known as Great Compassion Heart Dharani contains the power of Guanyin to rescue sentient beings. According to the Dharani of the Bodhisattva With a Thousand Hands and Eyes Who Regards the Worldʼs Sounds with Great Compassion , this dharani contains the power to remove all horror and suffering and achieve perfection. Furthermore, the dharani can also help followers listen to the Dharma (the teachings of the Buddha), enhance their wisdom, and guide the dead towards rebirth in a Pure Land. 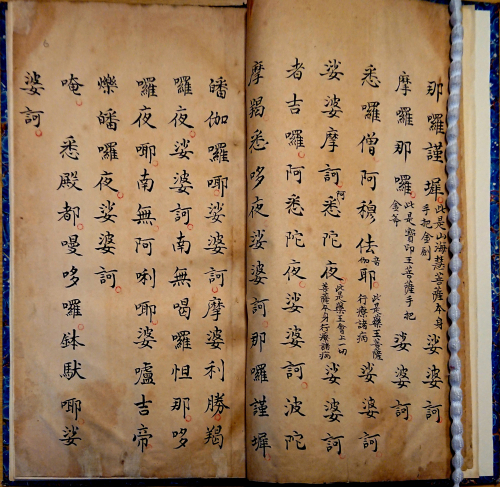 A sutra is a canonical scripture recording the teachings from Shakyamuni Buddha (the historical Buddha). The Universal Gate Chapter on Avalokiteśvara is the twenty-fifth chapter of the Lotus Sutra. As the name suggests, in this text the Bodhisattva indicates many ‘gates’, or methods for a follower to practice, and Guanyin will manifest in different forms in order to guide them. No matter who you are, Guanyin will appear in the corresponding role to teach you. The Bodhisattva also has the power to improve a bad situation. No matter what difficulty you find yourself in, when you chant the Bodhisattva’s name, he always is able to release you from suffering. Moreover, the sutra also reveals the power of Guanyin to provide followers with wisdom and fearlessness on the path towards Buddhahood. 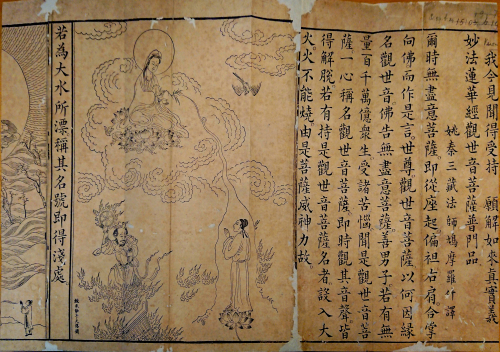 The above perspectives all demonstrate the Great Compassion of this Bodhisattva since the name he goes by, the form he takes and the practices he upholds all have the needs of sentient beings at their heart, showing that he does his best to rescues them. However, it is also important to note that practitioners should not totally rely on the power of the Bodhisattva. The main objective is for the followers themselves to cultivate a heart as compassionate as Guanyin’s, and in doing so they will be following the path of the Bodhisattva in order to attain Buddhahood.

The accompanying volume to the Buddhism exhibition, "Buddhism: Origins, Traditions and Contemporary Life", is still available for purchase at the British Library Shop and online.