Moloch gibbons and sloth bears: the work of the Bengali artist Haludar

The British Library has loaned twenty paintings and manuscripts to the Wallace Collection in London, for the ‘Forgotten Masters' exhibition, running through April 2020. Included are a selection of four works by the relatively unknown artist Haludar, whose natural history drawings are on display for the very first time. When the exhibition curator William Darymple started scoping paintings to be included in the exhibition, I brought to his attention the natural history drawings in the collection commissioned by the Scottish surgeon Dr. Francis Buchanan-Hamilton (1762–1829, hereafter referred to as Buchanan) at the turn of the 19th century. When I showed him the delicate paintings of a moloch gibbon, asloth bear, a long-tailed macaqu and the gerbils painted by the artist Haludar, Dalrymple was intrigued and we started considering the conservation aspects in displaying these works for the first time. 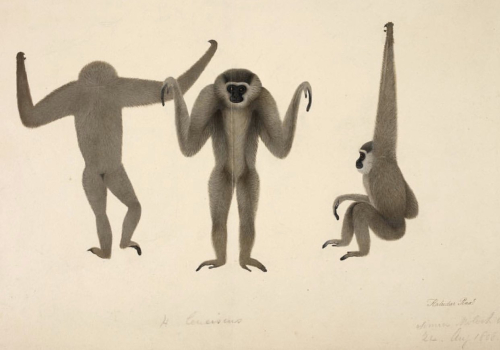 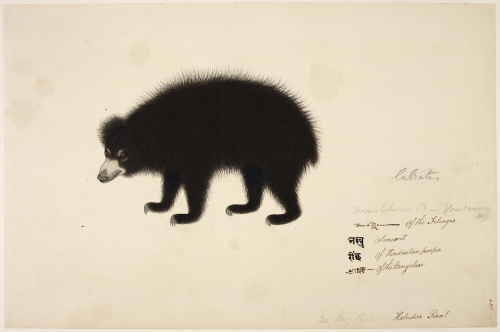 In researching the Buchanan collection at the British Library, which consists of several hundred natural history alongside countless volumes of his notes, I met with Dr Ralf Britz an ichthyologist (or fish scientist) at the Natural History Museum, who was working on Buchanan's volume on Fishes of the Ganges held in the British Library. When I mentioned my plans to work on the drawings of mammals in the Library's collection and researching the artist Haludar, he immediately sent me a scientific article by the French zoologist Henri de Blainville. In 1816, de Blainville  (1777–1850) wrote in the Bulletin des sciences, par la Société philomathique de Paris, that a new species of Cervus niger could be identified ‘after a very beautiful coloured drawing that was completed on site by Haludar, an Indian painter’. After reading this article I started to look at other early 19th century periodicals to see if any other zoologists were looking at de Blainville's work or by chance also mentioned Haludar. 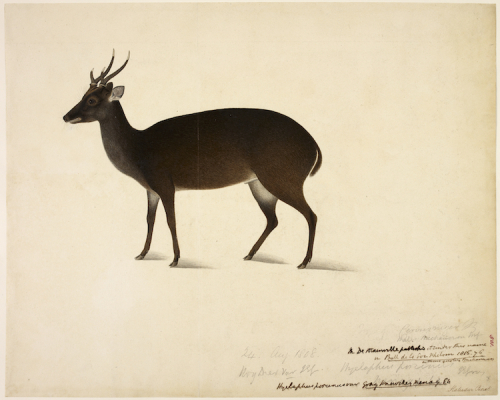 I discovered that in 1819,  the German naturalist Lorenz Oken’s periodical Isis also made reference to C. niger, stating it was ‘painted on the spot by the master painter Haludar’. Both references to Cervus niger, which is an Indian Sambar deer, provided only brief descriptions of the species, and omitted to give details regarding the source of the scientific information as well as the location of the artwork by Haludar. However, in cross-referencing C. niger with Haludar, we are directed to a single drawing in the British Library’s collection that was commissioned by Francis Buchanan inscribed with the artist’s name, that had been deposited at the Company’s library on Leadenhall Street, London in 1808. This painting of Cervus niger is one of 28 natural history drawings now held in the British Library that are inscribed Haludar Pinxt and that were prepared between 1795 and 1818, when Buchanan was working as a surgeon for the East India Company and actively documenting botanical and zoological specimens during his travels across the subcontinent.

Mildred Archer, art historian and author of Natural History Drawings in the India Office Library, suggested that Haludar most likely was one of the artists retained by William Roxburgh, the superintendent of the Calcutta Botanic Gardens. Roxburgh and Buchanan were in regular correspondence; Archer suggests that Roxburgh referred Haludar to Buchanan. Haludar was first employed by Buchanan from 1795-97, in Lakshmipur (in southeast Bangladesh), where the Scottish surgeon worked for the Company's factory until 1798 and spent his time studying the freshwater fishes in the Ganges River. During this time, we know that he 'hired a young Bengali artist to drawing various species he encountered'. According to Ralf Britz, Haludar was responsible for illustrating the freshwater specimens. While Buchanan-Hamilton examined and prepared written descriptions for each species, Haludar accurately depicted each fish with meticulous precision. He used pen-and-ink for the outlines, with pulversized silver to colour in the specimens (see BL IOR Mss Eur E72).

Following Buchanan’s posting at Lakshmipur, it is unclear whether Haludar accompanied Buchanan over the next few years when Buchanan was in Chittagong, Mysore and Nepal conducting surveys or sent on official visits on behalf of the Company from 1798-1803. Haludar may have returned to Calcutta in 1799 when Buchanan was temporarily placed in charge of the Botanic Gardens as Roxburgh was recovering in the Cape of Good Hope from ill health.

On returning from Nepal in 1803, Wellesley appointed Buchanan as his surgeon at Barrackpore, which had been converted as the residence for the Governor-General in 1801. On the grounds, Wellesley established the Barrackpore Menagerie which Buchanan would run as superintendent from 1803-05. Specimens from across the subcontinent were collected and brought to the menagerie. Based on archival evidence in the British Library, we know that Haludar was one of several artists to illustrate birds and mammals at Barrackpore. This information is documented in the series of illustrations that were sent in two batches from Barrackpore to London, first in 1807 and the second in 1818. A document titled ‘List of Drawings of E. Indian Quadrapeds and Birds made under the inspection severally of Mr Gibbon and of Dr Fleming and Buchanan – and deposited in the Library of the Honourable East India Company [Received on 24 August 1808]’,listed twenty-six mammals and twenty-eight birds. Of these works, Haludar was the artist of twenty-six drawings. In the second batch of a further 108 drawings sent under the authority of acting superintendent Nathanial Wallich in 1818, two additional works inscribed with Haludar’s name was sent to London. Among the wider collection of natural history drawings from Barrackpore in these two phases, the work of Haludar’s contemporaries Guru Dayal of Chittagong, Mahangu Lal and Bishnu Prasad are included.