The Light of Asia: Western encounters with Buddhism

This is the eleventh of a series of blog posts celebrating the British Library exhibition on Buddhism, 25 Oct 2019 – 23 Feb 2020.

Although there was widespread knowledge in medieval Europe of the legend of Barlaam and Josaphat, about an extraordinary prince in India who renounced the world, direct encounters of Europeans with Buddhism only took place from the thirteenth century onwards. Accounts of merchants, explorers and missionaries like those of the Franciscan friar Willem van Ruysbroeck (c. 1215-c. 1295) and Marco Polo (1254-1324) told of their contacts with Buddhist communities, perhaps with some exaggerations and misinterpretations, and early Western maps indicated important places of worship and Buddhist pilgrimage sites, which were often economic and trade centres at the same time. The travels of friars who were sent to central Asia, China and Sri Lanka aroused much interest in Europe, despite the fact that their knowledge was based mainly on observations and sometimes hearsay, and therefore very limited with regard to the Buddhist scriptures. 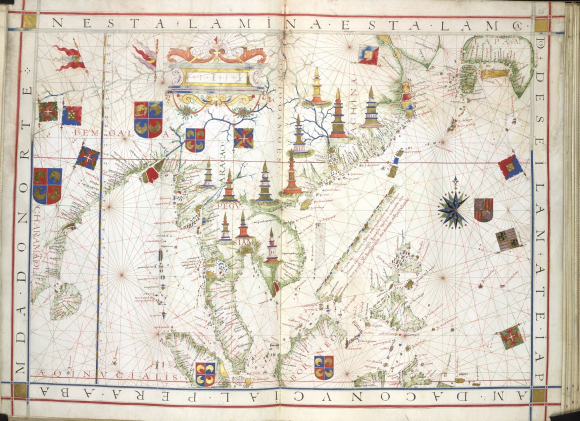 Map by the Portuguese mapmaker Ferdinão Vaz Dourado indicating major cities in East and Southeast Asia, many of which were centres of Buddhist worship and education, dated 1573. British Library, Add MS 31317, ff. 25–26

The German physician Engelbert Kaempfer (1651-1716) travelled extensively in Asia, including in Persia, Siam (Thailand), Japan and Java between 1683 and 1695. His travel notes and drawings and a book on the history of Japan, published posthumously, may have revealed to the West for the first time aspects of the true nature of Buddhist cultures in Asia. His remarkable collection of seventeenth-century works of art includes a series of fifty paintings of excellent quality by an unnamed Japanese artist depicting famous sights and events in Japan, for example an archery contest at the Sanjūsangen-dō Buddhist temple and a horse racing event at the Kamigamo Shrine, both in Kyoto. 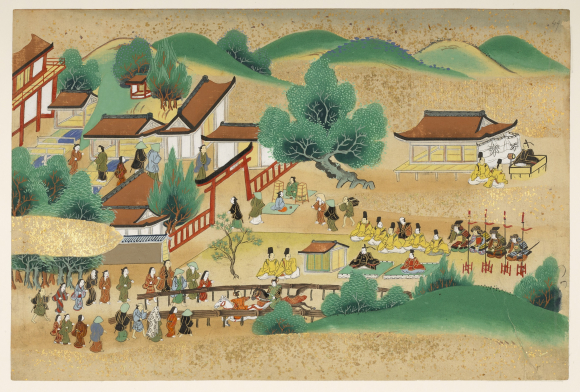 The first Christian missionary known to have acquired a good knowledge of Tibetan was the Italian Capuchin Francesco Orazio della Penna (1680–1745), who lived in Lhasa for 16 years and compiled a Tibetan dictionary of about 35,000 words. From the second half of the eighteenth century on, the Indian sources of Buddhism in the Sanskrit and Pali languages began to be studied extensively, and translations of original Buddhist scriptures helped to expand knowledge of Buddhist theory and practice in the West. In 1691, a translation of the life of Devadatta, the Buddha’s enemy, was published by Simon de la Loubère in his Description du Royaume de Siam, and in 1776 a Kammavaca ordination text was translated from Pali into Italian by Padre Maria Percoto, a missionary active in Ava and Pegu.

The year 1817 saw the publication of the first comprehensive Western study of Buddhism, Recherches sur Buddou by Michel-Jean-François Ozeray. A Danish linguist, Rasmus Kristian Rask, visited Sri Lanka in 1821 and brought back a significant collection of Pali manuscripts, making Copenhagen one of the most important centres of Pali studies in Europe at the time. Among the eminent scholars and translators of Buddhist scriptures in nineteenth-century Europe were Léon Feer, Eugène Burnouf, Jean-Pierre Abel-Rémusat, Émile Senart, Viggo Fausbøll, Robert C. Childers, Isaak Jakob Schmidt, Hermann Oldenberg, Max Müller, Thomas W. Rhys Davids and his wife Caroline A. F. Rhys Davids. The Pali Text Society, the major publisher of Pali text translations in the UK and Europe, was founded in 1881 by Thomas W. Rhys Davids and was presided over by his wife for twenty years following Davids’ death in 1922. 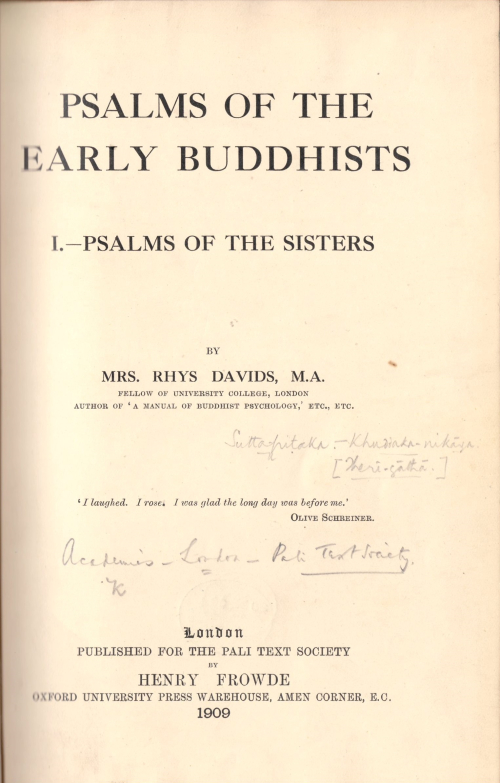 Title page of Caroline Rhys Davids’ translation of the Theri-gatha (Verses of the Elder Nuns) from Pali into English, published under the title Psalms of the Sisters. It is part of a two-volume book, Psalms of the Early Buddhists, published for the Pali Text Society, London, 1909-13. British Library, 14098.b.43

By the end of the nineteenth century various notable Europeans and Americans – the Theosophists Henry Steel Olcott and Helena P. Blavatsky, U Dhammaloka and Ananda Metteyya, to mention only a few – had embraced Buddhism. The first publication in the English language making the life of the Buddha and Buddhist ideas accessible to a wider audience was Sir Edwin Arnold’s narrative poem The Light of Asia: The Great Renunciation (1879), which in a relatively short time saw over sixty editions in the UK and around eighty in the US, in addition to reprints and translations into other European languages, making it one of the bestsellers of the nineteenth century. 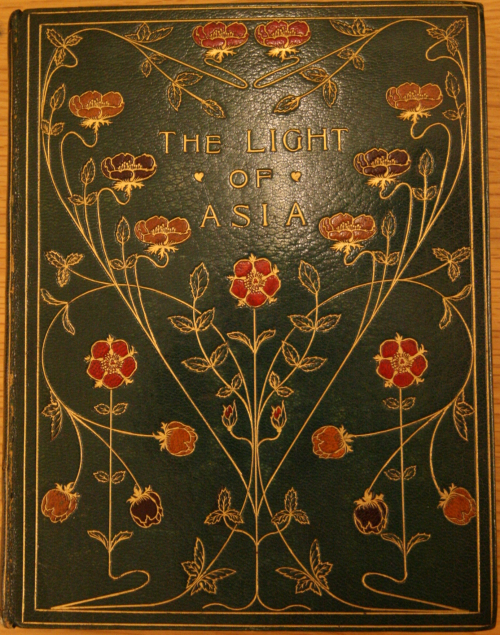 Inspired by Arnold’s narrative poem, various other works were created across the world. The American composer Dudley Buck wrote a full-length, three-part oratorio for mixed voices based on the successful poem with the same title, The Light of Asia, which was first performed in Washington DC in 1887 and then in London in 1889. It was the first American cantata ever produced in Great Britain. Buck’s composition reflects the growing popularity not only of the oratorio, but also of ‘Orientalism’ and Orientalist exoticism in art and music in the West. 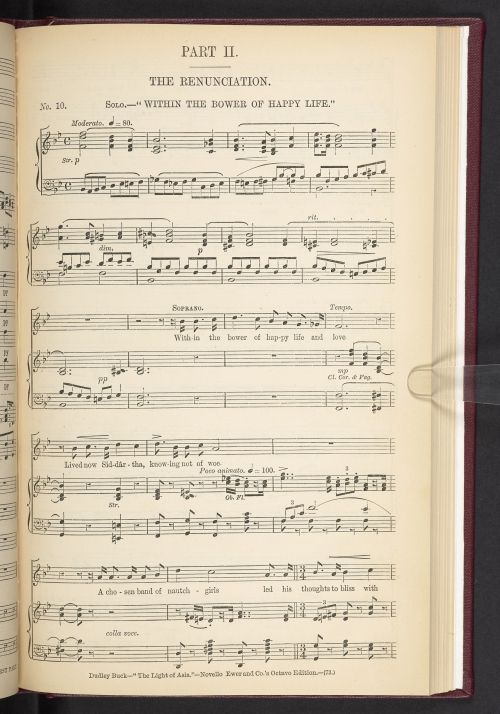 Shortly after, the English composer and singer Isidore de Lara wrote another cantata based on the life story of the Buddha, which he then turned into an opera with the title La luce dell’Asia. This work premiered in 1892 at Covent Garden, London. Another interesting creation was a dramatized version of Arnold’s narrative poem with the title Buddha by S(arat) C(handra) Bose, published in London in 1912. Bose had moved from Calcutta to work as a barrister in England in 1911 and later became an independence activist after his return to India.

In 1921, Bijay Chand Mahtab, ruler of the Burdwan estate, Bengal (r. 1887-1941), published under the title Siddhartha a collection of fourteen paintings by the young artist Srijut Lala Remshwar Prasad Verma to illustrate a selection of verses from Arnold’s poem. Mahtab said about the paintings that they were 'true Indian' art by a young artist ‘who comes from a family of artists who can trace themselves back to the Moghul Court’, but in fact they certainly show some Western influence. 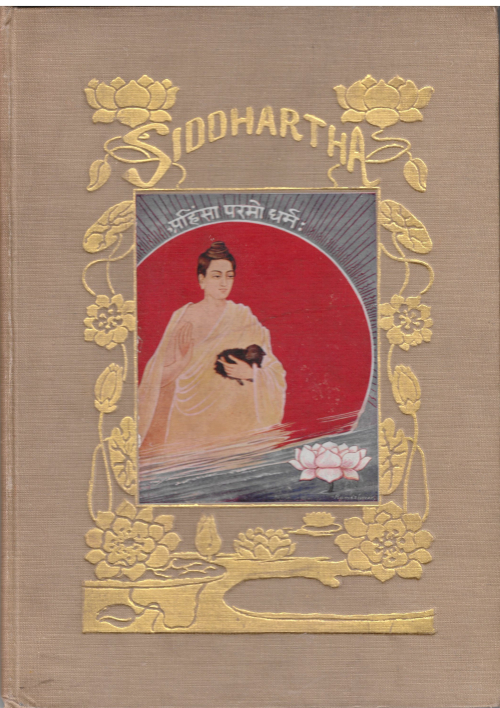 Front cover of the book Siddhartha by B. C. Mahtab with paintings illustrating verses from Arnold’s narrative poem, published by Thacker and Spink, Calcutta and Simla, 1921. British Library, 11643.dd.18

A German–Indian silent film adaptation of Arnold’s work with the title Prem Sanyas (German Die Leuchte Asiens meaning The Light of Asia) was released in 1925 by Himanshu Rai and Franz Osten. It was the first film produced in India with Indian actors to be distributed internationally. With the support of the Maharajah of Jaipur, authentic palace areas could be used for the filming, which made this production truly unique.

The growing interest in Buddhism and scholarly activities towards the end of the nineteenth century led to the organization of several expeditions to Buddhist countries in Asia from which large numbers of manuscripts in Sanskrit, Kuchean, Khotanese, Sogdian, Uighur, Tibetan, Chinese and other languages were brought back to Europe. These enabled the further investigation and translation of Buddhist scriptures. Among the most notable expeditions were the three led by Sir Aurel Stein between 1900 and 1913, during the first of which a large Buddhist cave library containing about 40,000 manuscripts and printed documents was discovered near the oasis town of Dunhuang in northwest China. Thousands more manuscripts were excavated at ruined and long-forgotten Buddhist sites along the Silk Road. Research on these important manuscript collections, which were dispersed to various institutions across the world, is ongoing in the International Dunhuang Project which at the same time also works with partners internationally to preserve these collections, to re-unite them digitally and to make them accessible online for research, learning and inspiration. 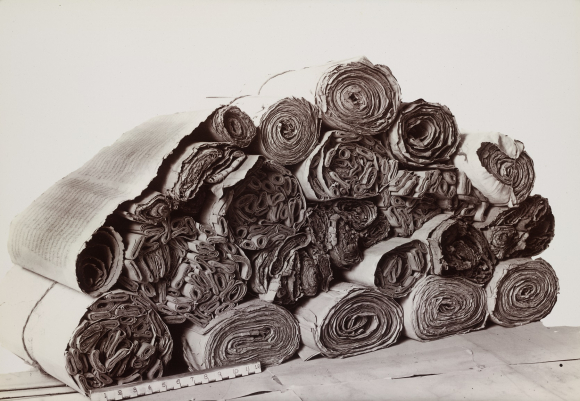 Bundles of manuscript scrolls dating back to the ninth and tenth centuries found at the library cave at Dunhuang, and photographed by Sir Aurel Stein. British Library, Photo 392/27 (587)

Accompanying the Buddhism exhibition, a two-day conference Unlocking Written Buddhist Heritage on 7 and 8 February 2020 explores Buddhist manuscript collections and related practices. From the beautiful illuminated manuscripts of Thailand to the medical texts of the Silk Roads, the speakers examine how collection items give context to our understanding of Buddhism and its practices.

Posted by Annabel Gallop at 1:26 AM