In 1774, William Jones (1746 – 1794), then 27, a graduate from Oxford University, a Fellow of the Royal Society and a barrister with the Middle Temple, received a copy of al-Mutanabbī's Dīwān (poetry collection) as a gift from a certain ʿAbd al-Raḥmān Beg. ʻAbd al-Raḥmān Beg, it would appear (although it is not certain), lived in the town of Hama (Ḥamā) in modern-day Syria and then an important administrative and trade centre in the Ottoman Empire. ʿAbd al-Raḥmān Beg sent this gift (now known as MS RSPA 107), having never met Jones, along with the following inscription:

This book is to arrive at the port of Oxford and is honoured to kiss the fingertips of the most intelligent and glorious Sir William Jones:

O winds of the lovers, send greetings to our beloveds
They are akin to the sweet smell of flowers in a garden
If you arrive, o fragrant breeze of love, say to them,
“You pillar of learning, be free of all worries!”
Judicious in his generosity, he is like silk in his elegance,
This man is William Jones, the Englishman Below this inscription, Jones has written:

I received this valuable manuscript by the hands of Mr. Howard to whose care it was entrusted in June 1774 at Venice, by Mr. W Montague. It was a present from Abderrahman Beg, who wrote the Arabick verses in this page, which are so flattering to me, that I can hardly translate them without blushing, 3 Oct. 1774, W. Jones. 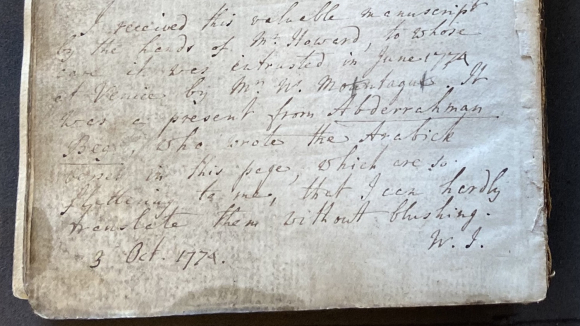 Yet, translate them he did – or at least, it would appear, given that the opposite side has been ripped out, but you can still make out the beginning of the word Oxford at the start of the page. Jones was clearly troubled by the verse. In two letters, also dated to 1774, Jones tells of his receipt of the gift and his consequent embarrassment. In a letter to the Mr. Howard who presented him with the manuscript, he wrote (Jones, pp. 229-30):

I have just received your most obliging letter, with a fine Arabic manuscript, containing the works of a celebrated poet with whom I have been long acquainted: this testimony of Mr Montague’s regard is extremely pleasing to me and I have a most grateful sense of his kindness. I am conscious how little I have deserved the many honours I have lately received from the learned in Europe and Asia: I can ascribe their politeness to nothing but their candour and benevolence. I fear they will think me still less deserving when they know that I have deserted, or rather suspended, all literary pursuits whatever and am wholly engaged in the study of a profession for which I was always intended. As the law is a jealous science, and will not have any partnership with the Eastern Muses, I must absolutely renounce their acquaintance for ten or twelve years to come. This manuscript, however, is highly acceptable to me, and shall be preserved among my choicest treasures, till I have leisure to give it an attentive perusal. There is a compliment to me written in Arabic verse, in the first leaf of the book, and signed Abdurrahman Beg: the verses are very fine, but so full of Oriental panegyric, that I could not read them without blushing. The present seems to come from the learned Arabian: but as he has not inserted my name in his verses, and speaks of Oxford, he must have heard me mentioned by Mr. Montague, to whom therefore I am equally indebted for the present.

At the same time in October 1774, Jones wrote a very long letter to Hendrik Albert Schultens, the Dutch linguist, in which he said (Jones, pp. 227-8):

Whilst I am writing this letter, a person called upon me with a manuscript, which he had received at Venice from Mr. Montague, a man of family. I immediately perceived it to be a most beautiful and correct copy of Motanabbi with a letter addressed to myself in Arabic verse, from some person named Abdurrahman, whom Mr. Montague had probably seen in Asia. I owe great obligations to the politeness of the learned Arab but I by no means think myself worthy of his exaggerated encomiums – but you know the pompous style of the Orientals.

In both letters, as well as the note he appended to the verse inscription in the manuscript itself, Jones emphasises his embarrassment at receiving these “exaggerated encomiums”; his response encapsulates a particular form of the colonial encounter, this being the interaction of two emotional regimes, expressed in two very different literary styles. Why did Jones feel so awkward about this poem? 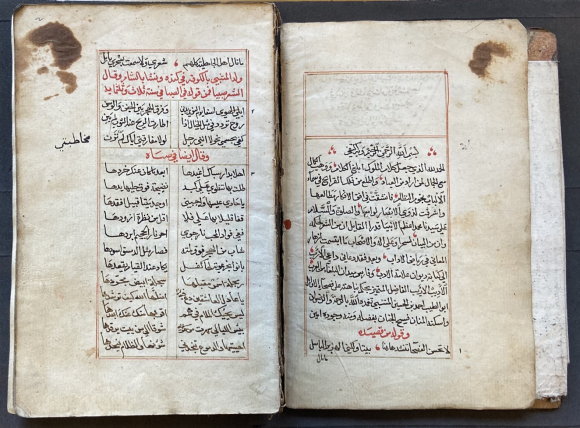 The poetry is a fairly standard example of Arabic panegyric (madīḥ ), a genre in which al-Mutannabī was one of the most exemplary poets of the entire tradition; his panegyrics for the tenth century Amir of Aleppo, Sayf al-Dawlah established his reputation and was, according to Margaret Larkin, the pinnacle of his career. ʿAbd al-Raḥmān Beg’s poetic homage to Jones is, in many ways, a pastiche of the conventional symbols of poetic panegyric which al-Mutanabbī used – to much greater poetic effect and success – in his panegyrics of Sayf al-Dawlah. The winds of lovers (riyāḥa 'l-ʿāshiqīna), the south-winds of love ( nasīma 'l-ḥubbi) and the sweet floral smell of the odoriferous plants and flowers in the garden which the object of poetry is akin to ( shābahū 'l-rayḥāna wa-l-azhāra shamman fī-l-jināni): these are all very conventional tropes of Arabic love lyric (nasīb), cliché almost. The clichés used by ʿAbd al-Raḥmān Beg may be conventional, but they also reveal an emotional regime which is expressed through the intermingling of the language of love and the language of admiration and an emotional regime in which this literary expression is completely normal, conventional and expected. Our concern here is: how did Jones read such poetry?

Jones was certainly well versed in Arabic poetry and would have been very familiar with the linguistic register of the nasīb and the panegyric which are both on show here. Having already read al-Mutanabbī, he would surely have known the idiomatic nature of the verse in front of him and the hackneyed terms of praise chosen by ʿAbd al-Raḥmān Beg. Why the embarrassment, then?

William Reddy has proposed the ‘emotional regime’ as a useful framework for studying emotion history, this being what he terms the normative set of emotions in any one culture and the linguistic, ritualistic and practical structures of that culture which produce and embed them. Here, we see the interaction and conflict of two such emotional regimes: the “exaggerated encomiums” and “pompous panegyric” of the poetry mixed with Jones’s blushing, embarrassment and ‘English reserve’. Jones’s reading sees the poetry as awkward, over-the-top flattery. This he ascribes to the “pompous style of the Orientals”, rather brushing it aside as a local custom, a linguistic cliché that is, to his mind, in the context of the men never having met, a faintly ridiculous example of such poetry, of which Jones feels “wholly unworthy”. Yet, in the colonial politics of the moment, it would be easy to forget that Jones was subject to his own emotional regime, one which does not valorise such overt intermingling of personal feeling with professional compliment, hence Jones’s feeling ‘unworthy’ of such compliments and emphasising in each of the letters his detachment from the subject of praise (his knowledge of Arabic, Persian and Sanskrit literature) and instead his professional attachment to a new field: the law.

However, Jones did not just read the poem. Rather, he struggles to accept the compliments and to see the poetry as anything other than “pompous” because he translates them into his own idiom and sees them from within his own emotional regime, and it is at the English expression of emotions, which has become decontextualised from its linguistic formality, that he blushes. Translation can be a tricky business, displacing a constellation of poetic tropes and images from its historical and literary context and embedding them within a new language’s and a new emotional regime’s constraints of style. Whilst in Arabic the poem is a fairly conventional intermingling of nasīb and madīḥ linguistic registers and images, the English translation stands out as unusual within the broader English poetic tradition and imaginary, exemplifying the discord felt by the inter-linguistic politics of emotional translation, the difficulty of expressing oneself comfortably across languages and emotional regimes which have their own register of emotional expression. In his translation, Jones has transformed the poem: out of a standardised and conventional set of images spread over three short lines of poetry, Jones has created this awkward feeling for himself in his attempt to read the Arabic into English, in his use of Arabic emotional expressions outside of their context.

This single interaction speaks to the difficulty we face in traversing emotional regimes, in translating styles and ways of speaking which are so at home in their own context into a new and unfamiliar emotional background.